Track_2016-10-30 173006.gpx Open full screen  NB: Walkhighlands is not responsible for the accuracy of gpx files in users posts

There was much discussion on Saturday night about Sunday's weather forecasts, in between beers and whisky. Most were saying rain and wind as Saturday had been. Big Thommo and i had two munros left in Glen Shiel, A'Ghlas-bheinn and Beinn Fhada, to complete the area and make it 8 summits out of 8 targets for the weekend. Hugh and Maya had tried to do the two on Saturday but settled for one given the weather conditions (and a wee detour

) and we were reliably informed that to do the two in a day was quite an undertaking. We like a challenge!!!!!

I woke about half 7am and heard the rain battering off the windows. Not a good omen. I decided to have a wee half hour extra in bed then woke up to these views. The summits were clear!

Time to go for it and hope the forecast was as wrong as Friday's was.

Well, one of you took the chance and we were accompanied by Callander Girl (Lynne) for the walk in to these two munros. Her plan was to do Fhada whilst we wanted to go to A'Ghlas-bheinn first to have a look at Guinnessman's (Steve) route suggestion of tackling Fhada by skirting east round Meall a'Bhealaich then attacking Fhada in a southerly direction. Hopefully Lynne will report back that we do not run up and down these hills and are perfectly good walking partners

We parked at 9.30am at the car park opposite Morvich Campsite and set about the long walk through the forest. It's a lovely walk at this time of year with the Autumn colours but it is long, just over 3 miles, and it took about an hour and a half to get to the river crossing just below the split in the paths. Just before that Bealach an Sgairne came into view which was our starting point for the proper ascent of A'Ghlas-bheinn as we hadn't gained much height so far. Lynne was happy to be our official photographer and we got a rare picture of the two of us. Part of the long walk in 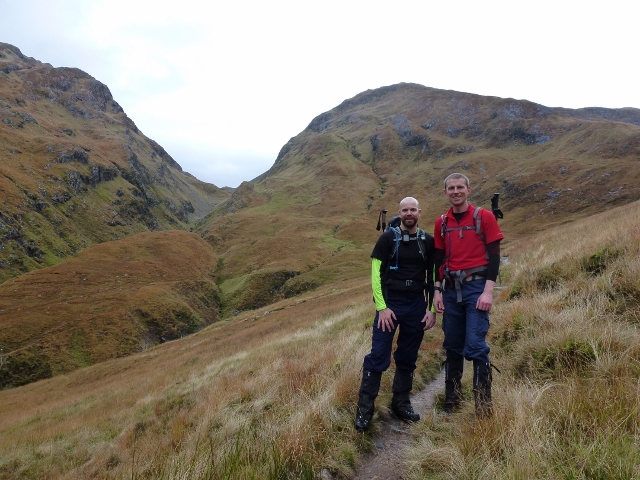 Bealach picture ruined by us :) The river crossing was easy as there were plenty of stones to chose from. Lynne told us she'd been here before when the river was in spate and it was a much trickier problem. Another potential problem had cropped up. I'd wrongly thought that the clocks going back early in the morning would give us an extra hour of daylight in the afternoon until Lynne told me we actually had an hour less and it was likely to get dark after half 4. I'd guestimated this would be about 12 miles and take 7 hours. Both were a bit off as it turned out and we ended up doing the last bit of the walk with head torches.

We said goodbye to Lynne at the river and started to climb towards the bealach. The path was excellent and easy to follow. The path off to Fhada is arked with a cairn and went off to the right just before we started to go through a fairly narrow pass with lots of debris from rock falls. The pass to the bealach

The view from the bealach was cracking down into Gleann Gniomhaidh. There is a huge cairn at the top of the pass over the bealach and the path to A'Ghlas-bheinn went off to the left here with the main path continuing down into the glen towards the bothy far away. There was no sign of a path round to Fhada from here but we hoped to spot something once we were further up. The path up Bheinn was very steep but was still good. I don't mind these ones cause we gained height quickly and the view behind kept getting better and better as we got higher. Our legs were feeling it from the weekends exploits (I suspect both walking and drinking!) so we had an excuse to keep stopping to enjoy the view.

Panorama of the view to the east

Hugh had warned us that Bheinn was a hill of many false summits and I could see why it would be like that in the cloud. Fortunately only the last bit to the summit was in the cloud for us so it wasn't quite so bad. It was a case of walking up and down all the little hillocks to the summit. Before we ended up in the cloud we got nice views out towards Loch Duich. Once in the cloud the wind picked up and it got cold. No views again

but Big Tommo did celebrate his 70th summit We didn't hang about and headed back along the path to drop back to the bealach. Met a guy on the way up who had done Fhada first. In hindsight after we'd chosen our route up Fhada perhaps it would've been better for us to do it this way. He did tell us that the route up Fhada was no where near as annoying as the one up Bheinn and he said he'd been up and down in 2 hours.

We looked for a route round Meall a'Bhealaich but there was nothing obvious. There probably was a way to go through the crags but we couldn't see the other side so had no idea what terrain we would be walking into. Having had bad experiences recently from winging it we decided just to stick to the paths, figuring that even though it was longer it would be quicker than trying to find an ad-hoc way up. So back down we went from the bealach to the junction of the two paths. Just over 4 hours had passed, I thought we had 3 hours of light left. As long as we were on the exit path for nightfall there would be no problems. The path up Fhada was an excellent stalkers path. We met Lynne on her way down too. I'd like to come back to this one on a good day because we were obviously walking into Coire an Sgairne and could see the bottom of the cliffs but the top was covered in cloud again. It was really still in the coire and humid too. I bet this is spectacular when you can see it. Made the ridge without too much trouble. This was the last of the views too as the cloud was hovering just above us. We followed the stalkers path along the top of the cliffs until a small cairn marked where we turned left and started heading up the grass slope to the summit. This is very Cairngormy and is just a trudge up a constant gradient of grass and bog with an on but more off path. Pretty annoying actually as it seemed to be never ending. Wasn't helped by the fact that we couldn't see anything and the rain had started. Eventually the summit appeared out of the gloom. Our goal had been achieved! Again we didn't hang about for long. 5 1/2 hours had passed, time to race the light! We retraced our footsteps back to the stalkers path at the top of the cliffs and all the way down to the river crossing. Cloud was getting lower. Now it was time for us to break out our big strides and get a march on! The exit path seemed to take forever. I hadn't paid a lot of attention to it on the way in cause we were all chatting away, I just remembered there were 3 deer gates to get through. An hour and 10 minutes it took to get back to the car, the last 20 mins or so in complete darkness apart from our head torches. Managed to spook a stag on the way out, those things are huge close up! I couldn't remember if they charged or not so took my light off him and hoped for the best, I knew I could outrun Big Tommo at least!!!!

In the end this was 15.7 miles, a bit longer than we'd planned and we took just short of 8 hours. We were well chuffed with our achievements over the weekend and rewarded ourselves with a big Fish and Chips In Tyndrum on the way home. We'd earned that!!!!!

I'd call that a successful weekend for you guys. Eight Munro summits targeted and captured, quiz won and getting someone to walk with you!

Graeme D wrote:I'd call that a successful weekend for you guys. Eight Munro summits targeted and captured, quiz won and getting someone to walk with you!

I think the biggest success was getting someone to walk with us!

See you enjoyed this duo, despite the clag around the summits

Sunday morning looked pretty good when we were leaving the campsite, definitely better than Saturday!

Good report John and a very productive weekend all round!

Pity you didn't fancy the route up Meall a'Bhealaich from the Bealach. I got a good look at It when descending A Ghlas Beinn and ascended by trending left (east ) from the bealach and then cutting back west and up steep grassy slopes on a route which avoided the craggy areas altogether.

BTW I'll walk with yourselves next time!!

A great duo these two and well reported.