It was the weekend of the Ratagan meet hosted by Darren & Anne in Kintail, and Jim , Michelle and myself had headed up late on the thursday night, camped behind The Cluanie Inn so that we could get a walk done on the friday before the meet started in earnest.
Earnest.
Adjective.
Synonyms: serious, serious-minded, solemn, grave, sober, humourless, staid, steady, intense.
(Never was a word used in earnest to mean the exact opposite of it)

After a cold, lonely and uncomfortable night spent in the tent, ( I speak for myself only here

) we packed up our tents, secreted Jim & Michelle`s bikes for the return trip down the road and headed to the car park for the beginning of The Brother`s Ridge walk. We sat in the car and had some breakfast first, some still hot tomato soup from Jim`s magic flask. As we slurped we heard the unmistakable roar of a RAF fighter jet overhead.
Out of the car and although it was turning into a nice bright day as the sun was beginning to pop up above the mountains it was a tad windy. Tad windy down here, mega windy up there!
We started off onto the path and straight up the golden hillside which is steep to begin with and continues being steep for ever... The two athletes marched on up the hill as I looked for any excuse to take a break. I was blowing out my arse already. Oh look some hills, think I`ll get my camera out. I caught up with my companions as they had waited for me just at the top of the forest and carried on along a path across the top of the tree line. We soon realised we had walked too far and had missed the path up to the bealach. We double backed and decided to head up just before we saw the path and the marker cairn showing the way, that we had blindly walked past.
Again the path was relentlessly steep up to the Bealach an Lapain, but we knew once we reached there, that the hard work would be over and we could enjoy the day up on the ridge. Sisters to the left Saileag & brothers to the right

It`s a simple walk up to the first Munro of the day, but of course the higher you get the more that you can see and the Five Sisters ridge began to reveal itself behind us. the view up the Gleann Lichd from Saileag summit cairn The walk along the ridge is easy going and not ridgy at all and although there were dark clouds hanging above us they never threatened to drop and spoil the views which where panoramic and made the day more enjoyable. Five sisters behind me As we headed along towards the central Munro we heard that roar again and looked around for the high flying jet, but it was way below us chicanning round the bends of Glen Shiel following the road below. Jim & Michelle waiting for me at the 1014m cairn 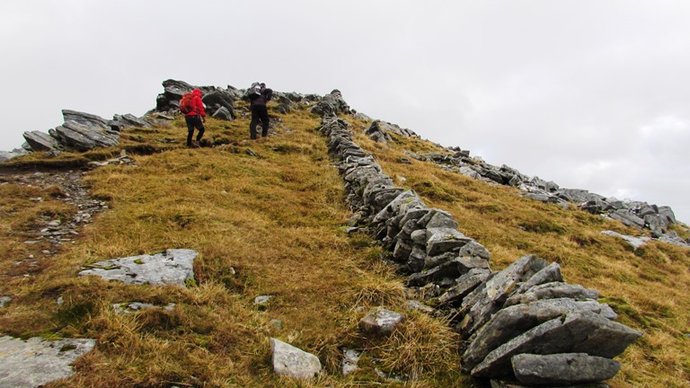 To get to the true summit of Sgurr a Bhealaich Dheirg there`s a bit of clambouring over some boulders and a wee climb up to the perfectly round summit cairn to be done. I did fancy a wee climb up onto it for a photo but it was quite windy and not to be attempted today. We quickly set off on our way as it was too windy to hang around.
As we set off down to the next bealach I began to feel some pain in my right knee and had to slow down and use my walking pole. We stopped for a break down here where we were out of the wind a bit and the sun even stayed out of the clouds longer to charge us up a bit.
After a wee munch we headed up towards the last Munro of the day. My knee was feeling better after the rest and climbing up was better than walking downhill.
Although it is quite an easy walk I collapsed in a pile on top of the small cairn on the flat top of Aonach Meadhoin. I hadn`t been out in a while ! heading for the last climb

All that was left now was to complete the ridge walk down and up onto Sgurr an Fhuarail and the long walk down to The Cluanie. cairn at end of the ridge

It`s an initially steep drop down the grassy side and care had to be taken until we got onto the more gentle lower slopes. On the way down we could see some walkers coming out of the glen from Ciste Dubh and hollered and waved to them. I spy a lift back to the car I thought

We managed to get down to the Cluanie in time for Gill, Lynne and Ann to pass and give Jim a lift to his car whilst me and Michelle went for a drink !

Cracking report Tommy and a great way to kick off the weekend ...... in earnest!

Graeme D wrote:Cracking report Tommy and a great way to kick off the weekend ...... in earnest!

cheers Graeme, glad you enjoyed it