I have to start this report with a confession. I wasn't sure I was doing the right thing. Had I made a terrible blunder? Was my entire life in tatters? I was climbing something SOUTH OF GLENCOE!
Compared to most of you I'm new to Scotland and on my first visit I'd had similar palpitations that had lasted until I'd driven up that hill on the A82 and gone past the sign that said I was now entering The Highlands - and I'd had my first view of the Blackmount, and the Big Buckle, and the stereo was playing a tune called "Gyspy Escape", and my whole world had imploded and I felt like I was home. From that day on, in my mind, the world starts at that signpost.
There are more reasons too. For the forseeable future, this is what I do; I bumble around in my van climbing things and taking photos and writing stuff and trying to sell it all. I've burned my bridges, there's no wading across the burn to get back to stability, this is it. And I kind of knew I was doing the right thing, but I'd completely forgotten why, and this had blown my confidence to shreds.
So it was that on a Tuesday morning in early November I found myself driving south, beyond the sacred signpost, into the land of the 'southern highlands', or the 'not the proper highlands' as my mind would have had it. But it was the area with the best weather forecast and honestly who can't have driven up that road and had a fascination with Beinn Dorain, the enormous cone of a mountain that dominates the road north of Tyndrum?
I was late getting there, I got diverted by the need to stop and take photos of The Buckle, and got into a conversation with a fellow photographer and spent the best part of an hour waiting for this light. Then there was the view from the Loch Tulla viewpoint

So it was really later than I would have liked when I finally set off from the car park by the Bridge of Orchy Hotel.
It being November I had dressed for cold weather and was soon dripping with sweat even though the climb was easy and the path was good, View back down Glen Orchy It didn't look very far to the bealach, but the incredibly clear air - so great for photography - was deceptive. But flippin' eck, it was making some great views Although it was further than it looked, the bealach was easy enough to reach and there opened up on the other side views down into deepest Perthshire And views back to the southern Blackmount, from here completely dominating Loch Tulla From here I turned right and followed the path... sometimes. At other times I got distracted and veered off to the west to look at the view, which meant that without realising it I ended up taking the path that perches precariously on the precipice of the western edge of the summit cone, skirting past rocks decorated with icicles which hung not quite vertically, sculpted by the prevailing wind 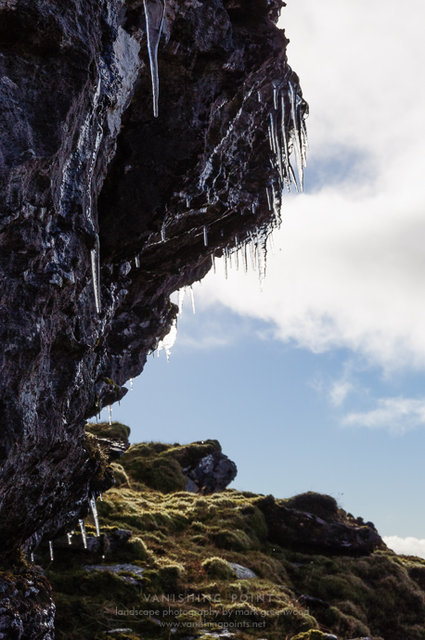 until the path rounded the front of the cone and made its way up to the summit from the south, affording some amazing views over an area I had been ignoring, apparently unfairly. In photography "circles" (as if I move in circles, more like squiggles) October in Scotland is regarded as the magic month. If you're lucky and you get high pressure and the right weather you can get light like nowhere else on earth. I nearly got it last year but as luck would have it, from this point on in my day of self doubt, the Scottish weather came out and gave me a good slap round the face. Which was exactly what I needed.
I returned to the bealach via the northern summit that I'd inadvertently skirted round (much easier, go that way if you don't get distracted) and already the light was becoming rather special Back at the bealach, I started up Beinn an Dothaidh. There was a decent path for a bit but then it pretty much petered out into bog and my feet started getting damp. But the views behind me were just getting better and better Around this time the weather decided I needed reminding that it was in charge now and it did this by the medium of hail. It hurled Tic-Tac sized lumps of ice at me on a 20-knot wind for a period of about 20 minutes. Having not brought any eye protection I was reduced to stumbling along with my head bent round so I was looking under my left armpit which made navigation a bit tricky and I ended up atop the easternmost, and lowest, of the three summits, cowering under layers of primlaloft and goretex and waiting for it all to go away. Which it did, eventually, once my toes had started going numb. But as it turned out, I was merely being diverted away from the best summit, saving it till last.
Once the weather eased, I made my way to the middle, and highest summit, and was rewarded for my efforts with a piece of a rainbow. which got me wondering if this was like a video game and would I get the complete rainbow if I bagged all three summits in twenty minutes in a hurricane? Well no, actually, the reward was much closer than that. I headed over to the third summit just because I was there and why not? At which point the weather let me have my rewards. As I stood in the freezing wind, wearing every item of clothing I had with me but still shivering, drinking an entire flask of tea, taking photo after photo after photo, thoughts and ideas started to crystallise in my mind. I began to remember why I was there. It wasn't just about having a nice look at the view - in the face of all of this that just seemed trite and shallow. Something much deeper was happening but I still couldn't put my finger on what it was.
After some time - and as it turned out 68 near-identical photographs - the cold became too much, especially for my damp feet, and I headed downwards back towards the bealach and then, halfway there the weather decided to make it spectacularly obvious for me. I was standing on a small promontory just below a crag. There was a perfectly chair-sized rock for me to sit on, I was sheltered from the wind, completely comfortable with an unobscured view like an expensive theatre seat. And as I sat open-mouthed in wonder as the light show played out in front of me I realised why I was there. That sense of wonder, that almost childlike sense of awe - that's something I need to connect with. I do this because my sense of wonder needs feeding, and that's something that only the mountains can do. And the photographs I feel driven to take are my way of saying "Look! Look at what the world is!"
Twenty minutes, half an hour, an hour went by and then in a very last hurrah, the sun signed off for the day by filling the coire with a light of such colour and intensity the like of which I have never witnessed before Head torch on, I was back at the car park well after dark but glowing inside but still with one burning question - why doesn't everybody do it?

And what a reminder - just sensational pics. Wonderful.

As to the question: why doesn't everybody do it? No idea, but, after going up Snowdon last week with my brother and nephew on what turned out to be a relatively "light" day - probably not above 1000 people on the hill - I'm rather selfishly glad they don't!

Oh my!!!!!:-) I was in tears of laughter and joy. What a report! - and photos! Keep doing what you're doing and you'll get there some day I'm sure.

...but your photos says more than any word can describe

As others have said before me, great photos.

What an amazing and brave lifestyle you've chosen for yourself - surely vindicated by your day on Beinn Dorain and those stunning photos. A really inspiring report, good luck for the future.

As you say days like that are so rare, I have been lucky enough to experience similar conditions - bottom line, Scotland is unique

Alteknacker wrote:As to the question: why doesn't everybody do it? No idea, but, after going up Snowdon last week with my brother and nephew on what turned out to be a relatively "light" day - probably not above 1000 people on the hill - I'm rather selfishly glad they don't!

Ha yes good point. I saw 3 people in the course of this walk. Perhaps everybody else does do it but they all do it in Snowdonia

dav2930 wrote:What an amazing and brave lifestyle you've chosen for yourself - surely vindicated by your day on Beinn Dorain and those stunning photos. A really inspiring report, good luck for the future.

Now I've looked through the Vanishingpoints portfolio - some really amazing images. I really hope this all works out for you

Alteknacker wrote:Now I've looked through the Vanishingpoints portfolio - some really amazing images. I really hope this all works out for you