It was wee Bob's 13th birthday today so we went for a family walk up Ben Chonzie as given the weather forecast I thought this would be a hill suitable for everyone.

It was a cold and dry start to the walk, and while there was a little bit of wind it was nothing too troubling.

The hill became more interesting once off the stone track and onto the boggy path, than thankfully was not too boggy as it was a little frozen. As height was gained on this path the full force of the wind started to hit you. By the time the old iron fence posts were reached you had to walk at an angle to avoid being knocked backward by the wind.

The wind made Bob think of giving up, but he dug in and struggles along to the summit. Collecting some old broken fence posts seemed to motivate him and gave a little extra weight to stop him being blown away. Mind you on the final stretch to the summit I held on to him to keep him upright.

The views across to the Lawers range were wonderful.

On the way down there was a prolonged snow shower - well the snow was like wee balls that made your face feel as if it was being sand blasted.

I was a little disappointed that we didn't see any of the famed hares. A grouse did fly across our path at one point, and once back at the car there were a couple of red deer does at the edge of a field full of grazing sheep. 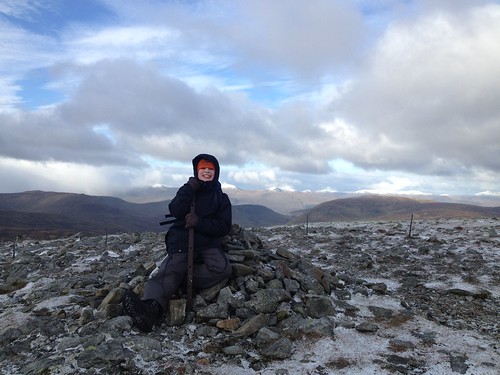 Bob at the summit 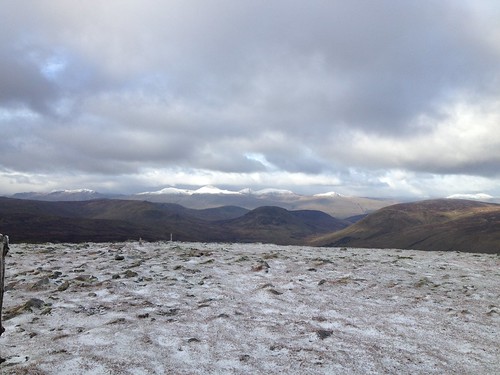 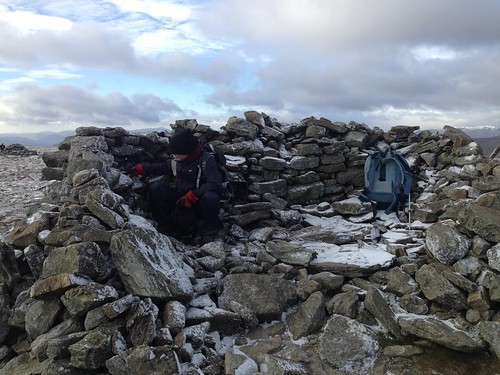 Hi Bmg99! The summit of a Munro is the very best place to celebrate a birthday.