I wouldn't consider myself much of a hill walker. I do a lot of climbing (summer and winter), mountainbiking and more recently a bit of running (well...). I've had a bit of spare time recently, so I've been getting up a few hills in this fine Autumn. Having read a lot of other useful and interesting trip reports, I thought I'd add another one with my route and my take on tactics.

This morning I woke up at 08:45 and decided to "go and have a look" at doing the Ben More Four, and driving from Glasgow, with short days I took the option nof going from the North, A85 side rather than the more common circuit from Inverlochlarig which looks to have less total ascent and more gentle climbs.

I'd recently had a good time doing Beinn Chabhair, Beinn a Chroin and An Casiteal so thought these would be a good choice. To save the 9km walk back to Inverarnan, I'd locked my mountainbike at the end point of the walk and rode on the west highland way back to Inverarnan - much more fun and a hell of a lot faster than walking.

So, this time I took a similar approach, well, a reversely similar approach! I left the van at Ben More farm and cycled to the layby at the start of the farm track up Glen Falloch. After locking my bike I left around 11:30 on foot. As recommended I took this path for a while, wondering if there would be an obvious trail to the Grey Heights, or just a nondescript bog. There was, in fact, a small bridge and some boggy walker/cow track by the fence at the far end of the forestry plantation - quite easy to spot really. 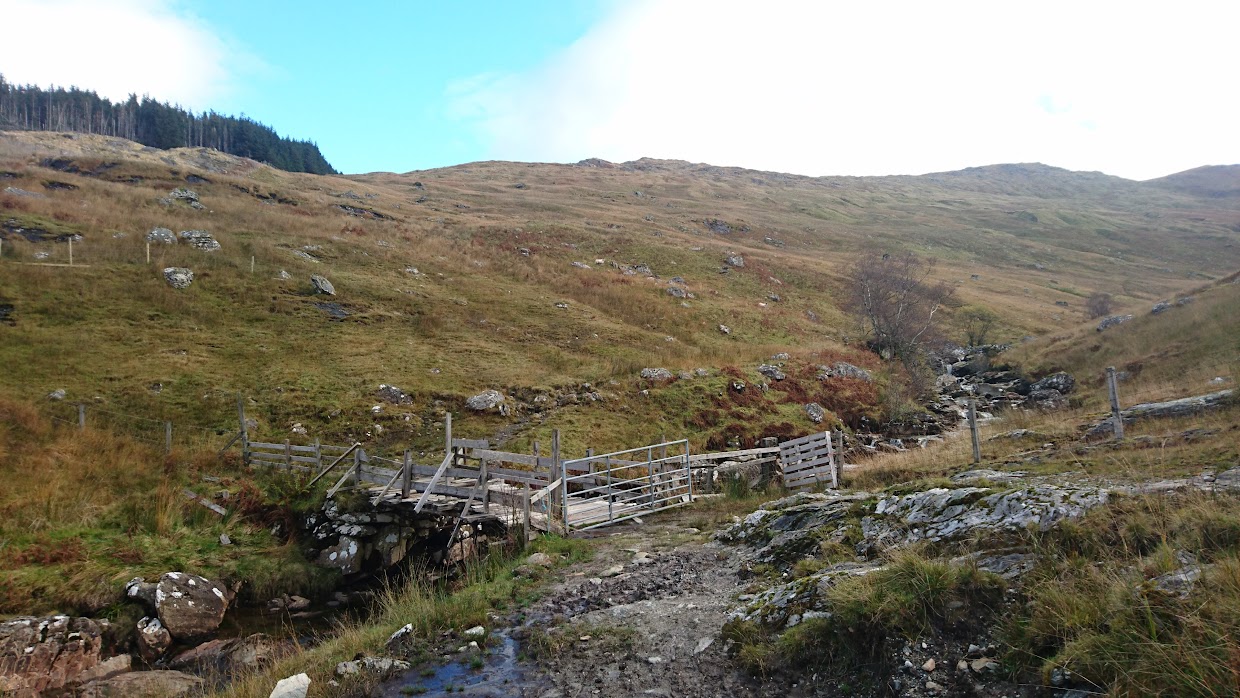 Once on the ridge proper, the path is more distinct and enjoyable. 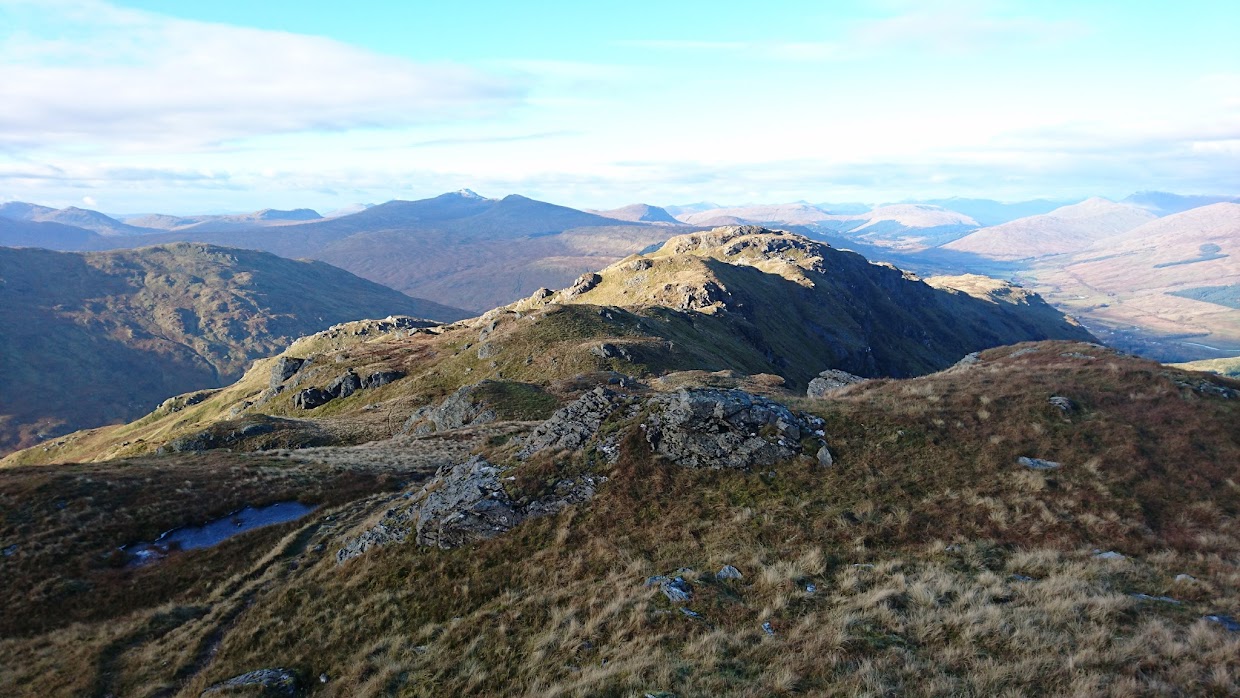 Whenever exposed to the North wind I felt the chill and needed a hood up, but otherwise it was quite pleasant in my unusual combination of leggings, shorts, trail running shoes, baselayer and winter softshell!

Some of the paths were quite icy, but I didn't struggle for grip most of the day. 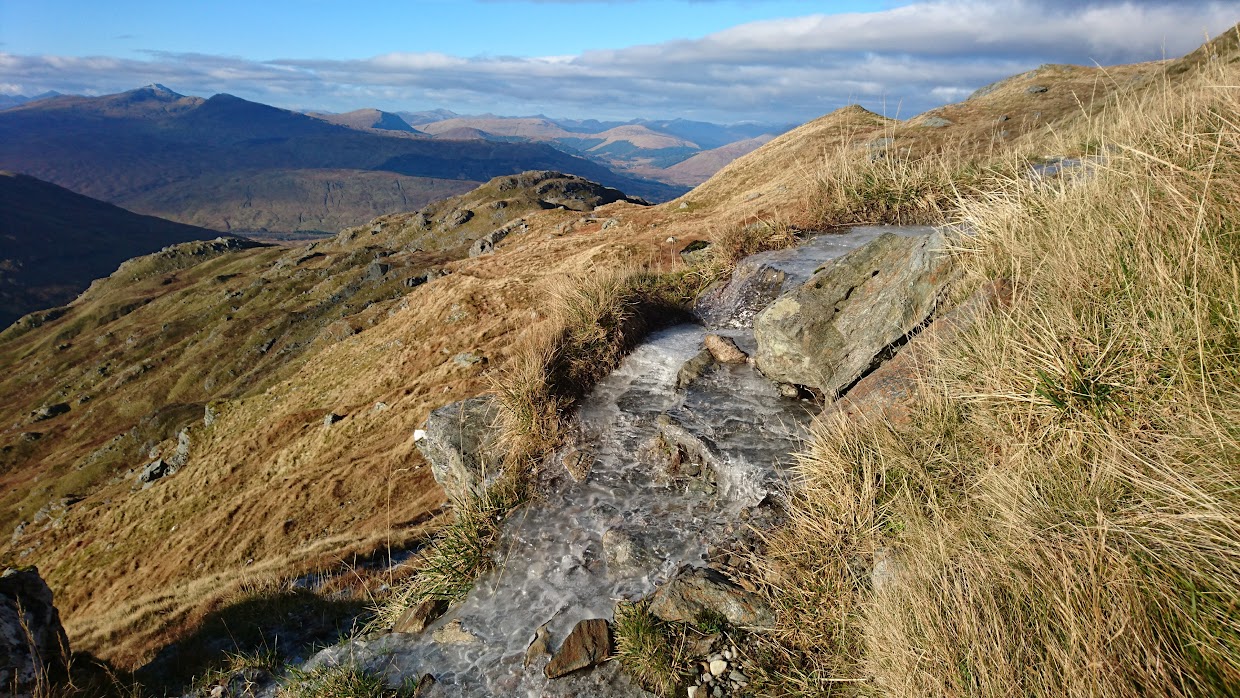 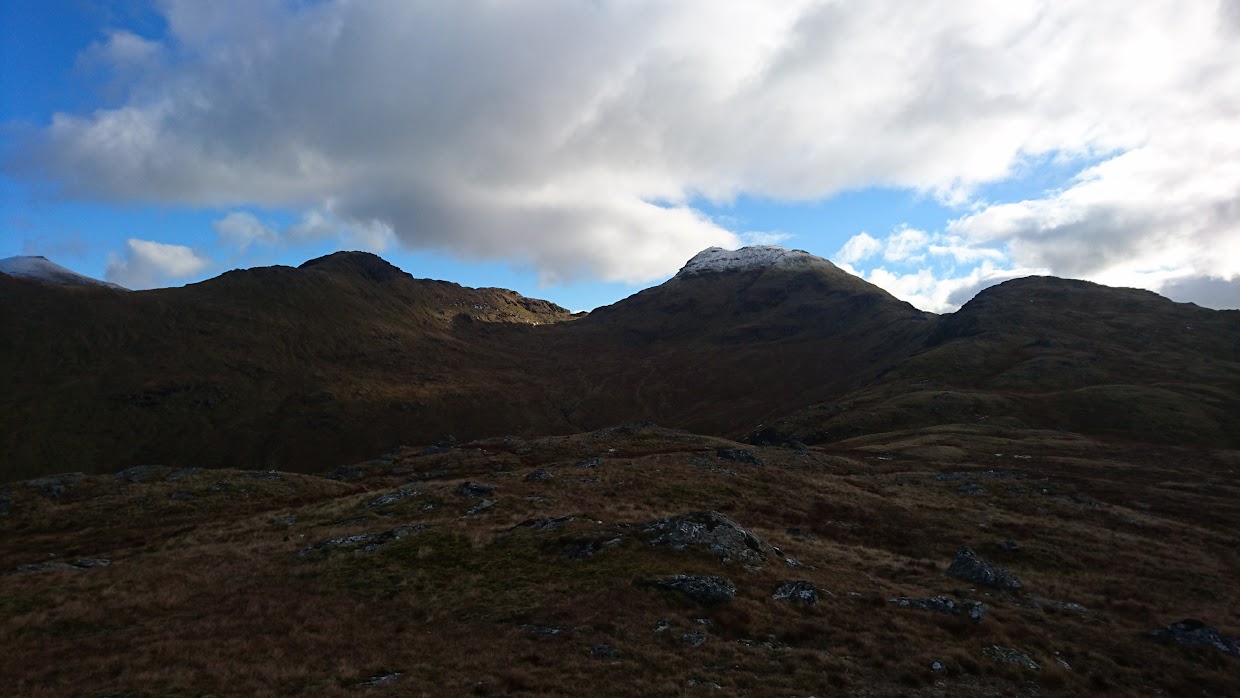 Getting towards the first peak of the day I noticed it was about 1hr 20 minutes from leaving my bike, so I upped the pace hoping to make it within 1hr 30...forgetting I may suffer for it later. I didn't quite make it, and I did suffer. Munro #37 done.

I trotted down to the bealach, passing a man with two well dressed dogs and looked up to what seemed like a very short re-ascent to Beinn Tulaichean. I quickly made my way up there, passing a pair who looked happy to be out, exchanging the usual pleasantries about the weather reaching the summit at 13:28. 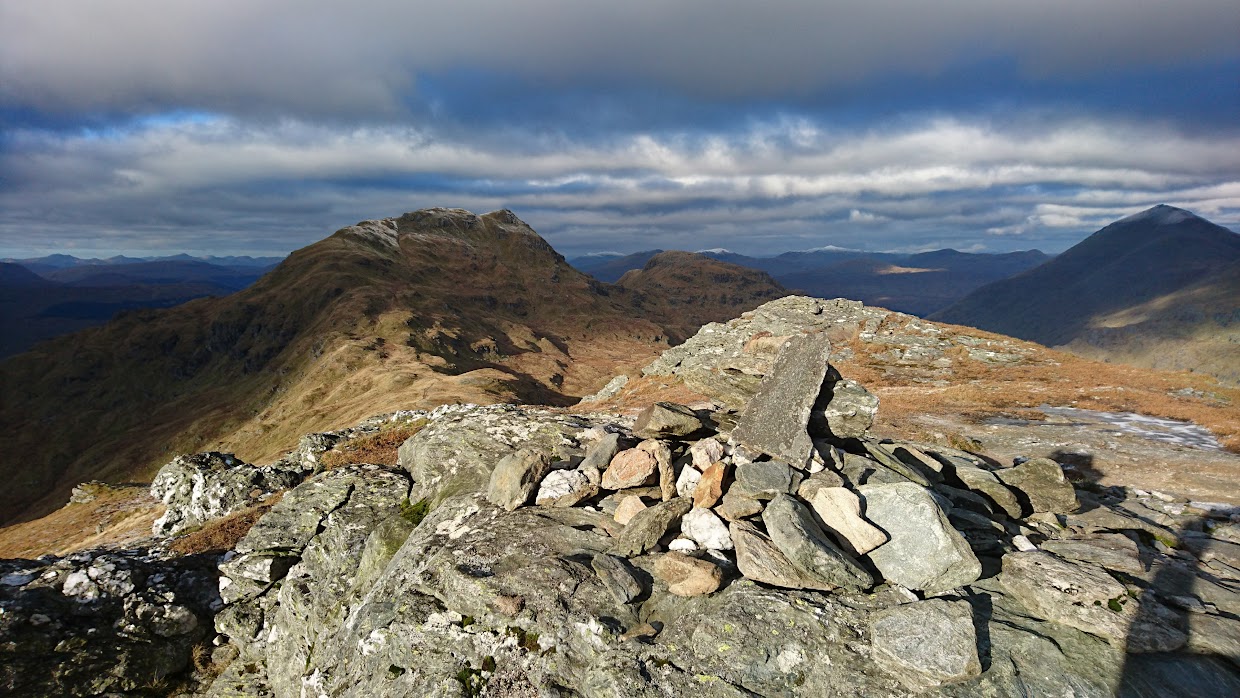 Two Munros in under 2 hours "things are going well, this could be a short day". Ha. Ha.

Back at the bealach it was decision time - back down to the bike with only 2 munros, or commit to the full four. At this point I was starting to feel some of my persistent running related niggles (being fairly new to hill running, and not being much of a runner in general). It somehow felt surprisingly committing, with minimal gear and going solo, away from the other walkers - what if twist an ankle, or get too cold, or my IT bands pack in, or my hip flexors, or both!

After a few moments thought I went down...down...down to the huge valley beween the Ben More massive and one I had just been on. 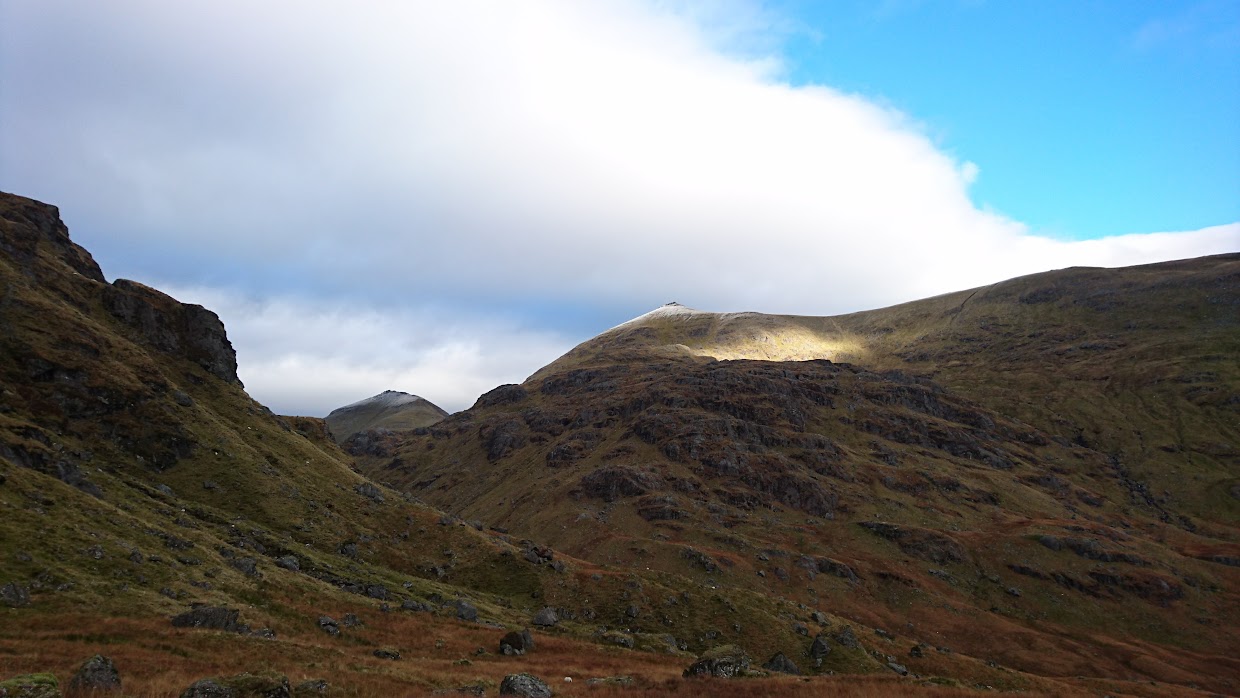 I had done some research about this route, but it still wasn't clear if there was much of a trodden path, so I just followed my nose, traversing down under the cliffs and then steeply, very steeply! up the other side. This turned out to be the second hardest part of the day with tussocky, steep and cliffy trudging. I was starting to feel the earlier pace and had to stop for a few rests and some fuel. Finally I hit the ridge path just south of Stob Binnein and summited #39 with some lovely views to the West. 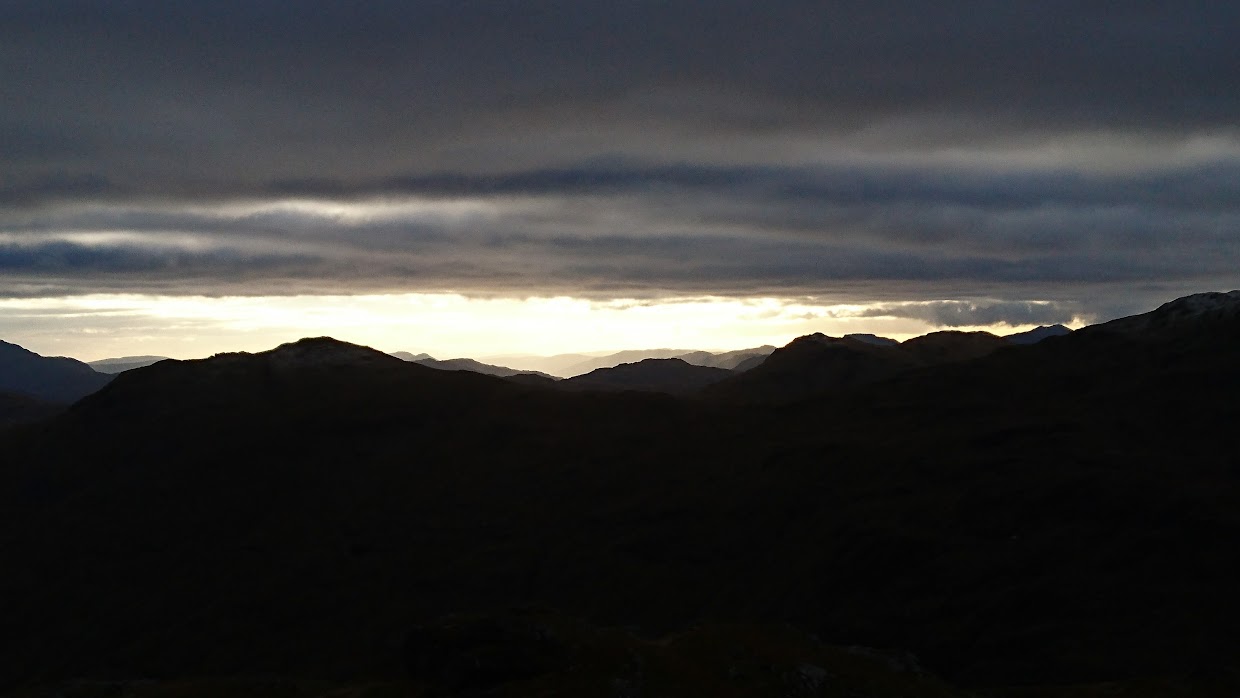 And views to Loch Tay: 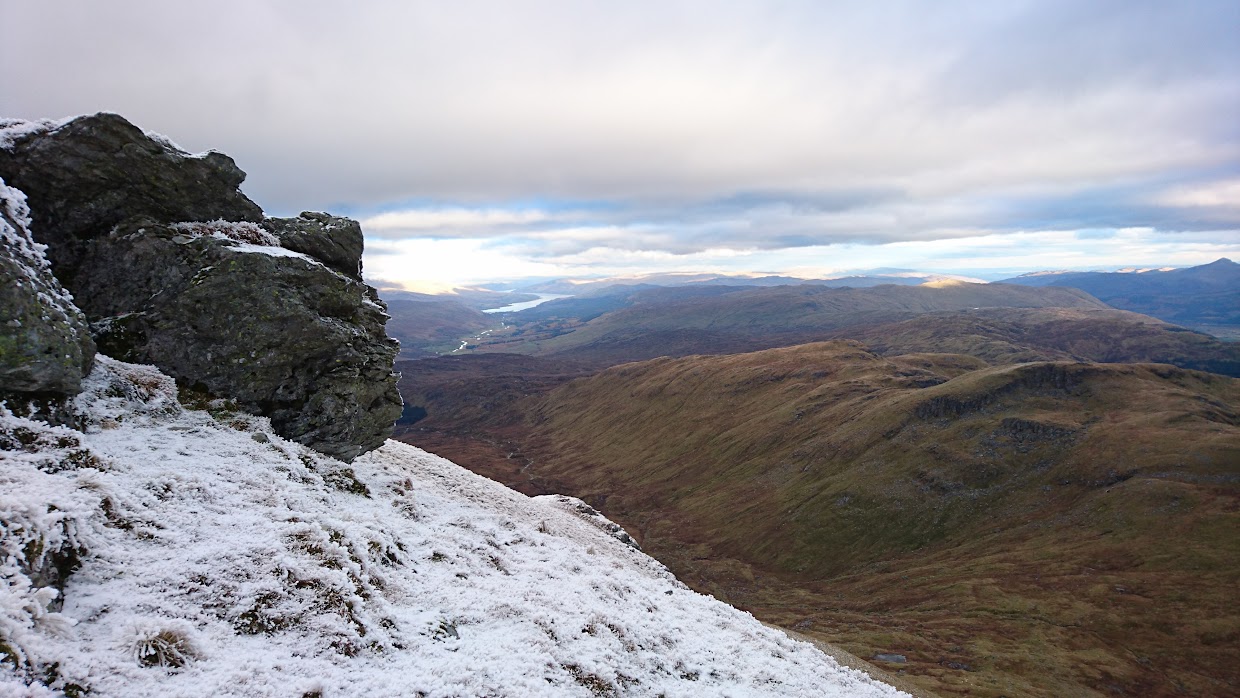 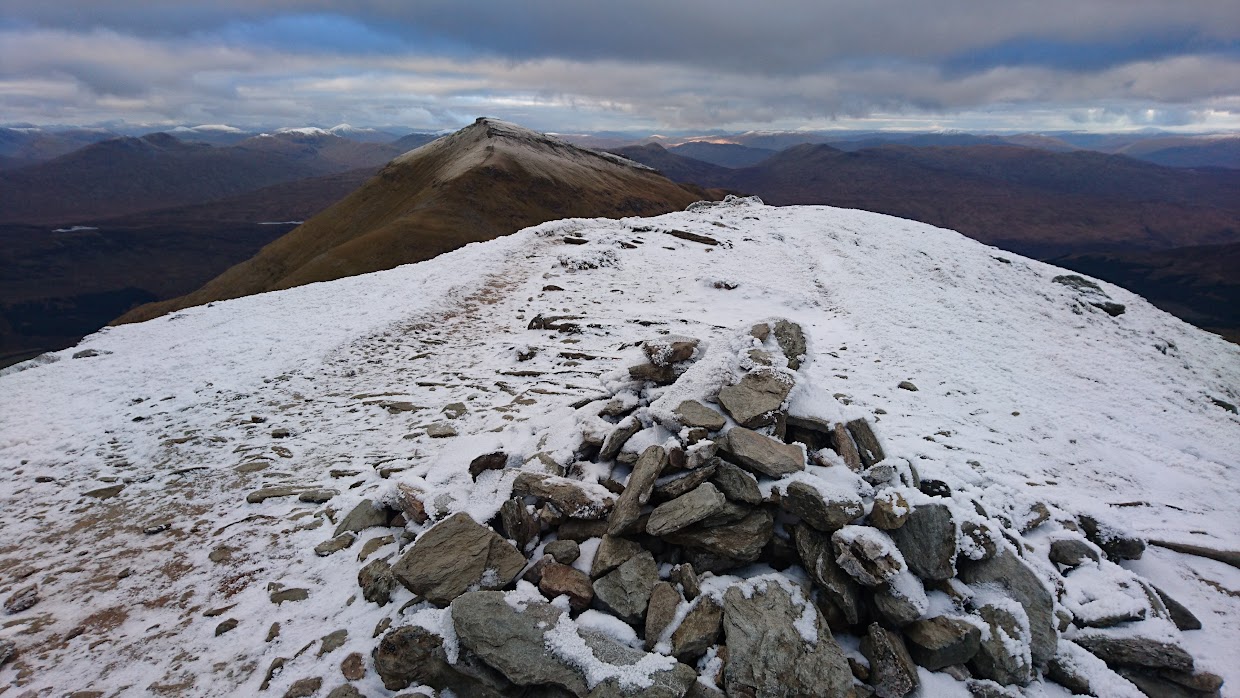 The descent down to Bealach-eader-dha Bheinn was quite nice, with only a couple of short stops to let the legs recover. Two Ben More summiters had headed down west from there on their descent, leaving just before I got a chance to say hi.

By the time I was heading up the final climb to Ben More I was fully into "all day suffering mode" where the pace drops a little and the brain works hard to ignore the pain!

It was getting late, with the sky starting to turn darker and the cold north wind was biting again, so I didn't hang around long and found the faint path down the very steep north-west shoulder of Ben More. This was mainly on a well stepped-out path, interspersed with a few wet/boggy grassy sections which once sent me flying on my arse!

I caught up with a mountain instructor with some ML trainees who commented on it being one of the stiffest up-and back munros - I can believe it! I also got a chance to say hi to the previously mentioned summiters who had arrived at the gate on the main path at exactly the same time.

So, in the end, the easy summit earlier in the day was fully balanced out by that final descent! Chuffed to make it back to the van in under 5 hours from parking the bike (and just 4 minutes over the 5 hour mark car-to-car).

Heavy snow forecast for tomorrow, so maybe time to hang up the trail shows and get out the crampons.

P.S. I did remember to pick up my bike on the way back to Glasgow...

For some reason I can't see your pics - only Image.

Is anyone else having the same issue??

Having the same problem here, can't see any of the photos. A real shame because excited to see the photos after reading the report

Woops, forgot to add them to a shared album. Hopefully that's working now.

Yep, all pics except the first one now visible.

Firstly, well done on a very quick time. That's really going some, especially given the really tough - long and steep - climb between Cruach Ardrain and Stob Binnein - some 700m. I did it the other way, so not quite such a height gain, but it was still knackering - http://www.walkhighlands.co.uk/Forum/viewtopic.php?f=9&t=45097 .

Alteknacker wrote:Firstly, well done on a very quick time. That's really going some, especially given the really tough - long and steep - climb between Cruach Ardrain and Stob Binnein - some 700m. I did it the other way, so not quite such a height gain, but it was still knackering - http://www.walkhighlands.co.uk/Forum/viewtopic.php?f=9&t=45097 .

In hindsight, that might have been a better way to do it, North to South. Ont he other hand, you then have the Ben More ascent to do straight away which looks quite brutal!

As a biker, climber & skier I'm planning on doing a lot of munros combining those activities, for either pleasure or logistics. I've not yet done the Cuillin Traverse. Was hoping to do it with the lass next summer, at a leisurely pace!