Military Manoeuvre's, on the Dalmally Horseshoe.

Military Manoeuvre's, on the Dalmally Horseshoe.


One I've wanted to do for a while

Been up the ridge on the south side of the Allt Coire Chreachainn, a few times, but chickened out the return, over Stob Diamh, mainly due to weather. This time, I fancied tackling the steeper rise and going anti-clockwise, all being well Parked at usual spot, in layby beside an nice "Jag," just on the B8077. Now, honestly, who takes their Jag, on a hike?

Easy stroll round to where a small bridge crosses the Allt Coure Ghlais, where I was confronted, with an advancing column, of enemy Heilan' Coo's Advancing column of Heilan' Coo's dead ahead. First contact with the enemy at a strategic crossing point :) Out-flanking manoeuvre appears to have worked.

Who gives way in such a situation? Easy, the wee fearty walker

Once the cattle were safely behind me, I followed the new hydro road, up to it's end/start, then crossed the burn, looking for an obvious way up. Waterfall in Coire Chreachainn, maybe worth a closer look someday?

More or less, headed NE, straight up onto the ridge, where I soon saw an obvious trail. Don't know where it comes down off the ridge? Anyone? 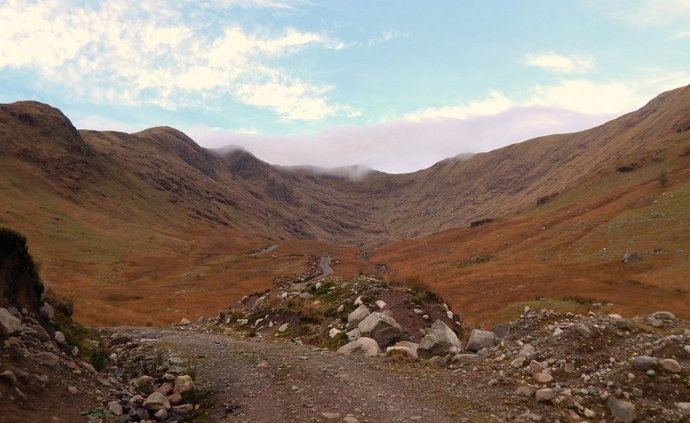 View into the bowl of the spectacular, Coire Chreachainn. Cairn on cloudy Sron an Isean. Fleeting break in clag, down into Coire Chreachainn.

By now the summit of Stob Diamh was now immersed in cloud and the wind steadily freshened, to make things distictly fresh

Descending from the clag on Sron an Isean, who should I meet but the 'Jag Man.' A few polite words were exchanged, then off we parted. Didn't take much longer till on the summit. Contemplated whether I could have made the descent from here, back to Sron an Isean, the last time I was here in the snow, but reckon I probably did the right thing. Looking down on reservoir and Loch Awe. Ridge out to Ben Cruachan. Looking down on the Orchy and Dalmally. Out to Scarba and The Garvellachs. 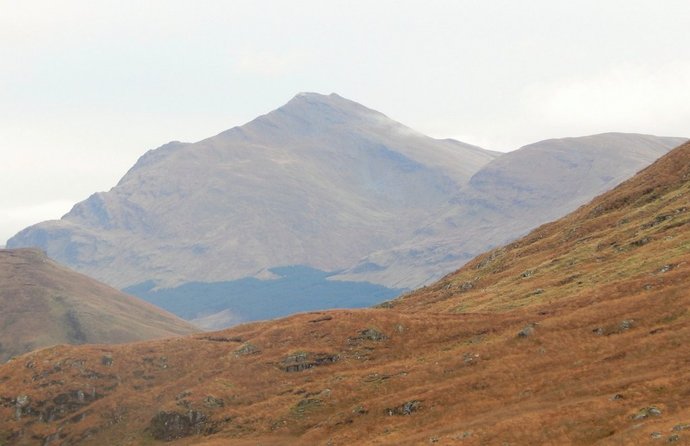 Continued on my way anti-clockwise, to Stob Garbh, then 947m spot, by which time the cloud had more or less cleared, as it was bound to do

From here the ridge eastward is easy to follow, back down to the wooden bridge. I was relieved to find no cows here, but the crafty blighters were waiting to ambush me at the reservoir, beside the old quarry. Another diversion was taken round the lower end of the water tanks, where I nimbly outflanked a solitary heifer, however the main group outflanked me, in a pincer movement, which took them onto the road ahead. As cows seem to do, they then advanced at a hefty trot before me, for a good few hundred yards, till confronted by a gate. Surrounded by my advance, they finally chose to retreat over the wild ground, leaving me relieved to finally have a clear road ahead

Surprisingly, I was back at the lay-by before Jag Man, but perhaps he was fighting his own rearguard action against the Heilanders 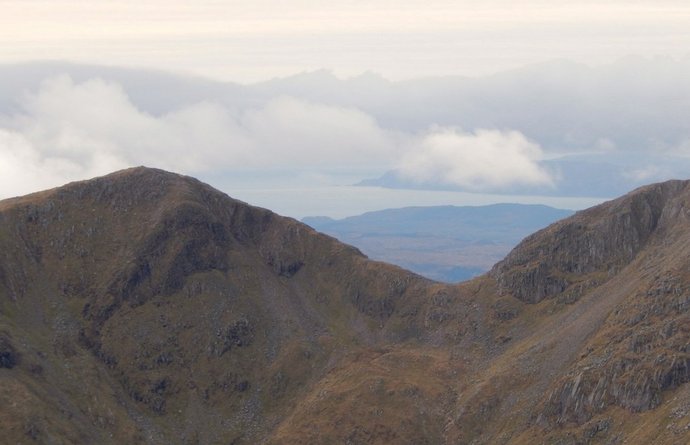 Stob Diamh and Sron an Isean, now clear ... just about.