It looked like plan B was in order today, plan A being to go up a hill in Glen Affric and see the last of the Autumn colours over there. A hastily concocted plan C to head up Ben Avon from Tomintoul was also ditched due to a deterioration in the weather forecast.


Rinnes.gpx Open full screen  NB: Walkhighlands is not responsible for the accuracy of gpx files in users posts
I left home just after 7:30am in showery rain. Although this didn't really let up, there was an impressive dawn along the A96. By the time I had crossed over from Forres to Knockando, it had mostly gone, but things didn't look too bad on Ben Rinnes. 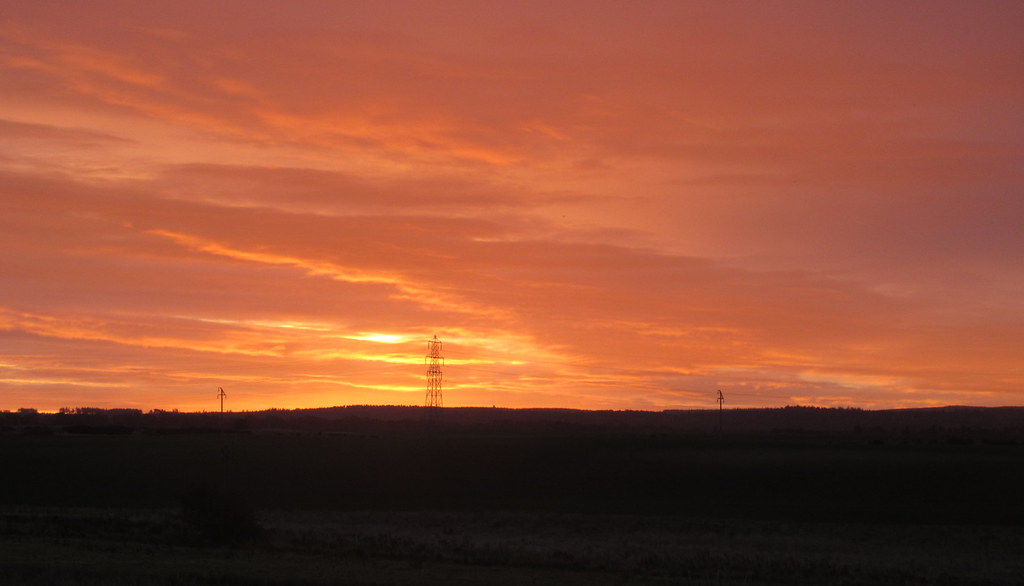 Conval Hills and Ben Rinnes from above Knockando: 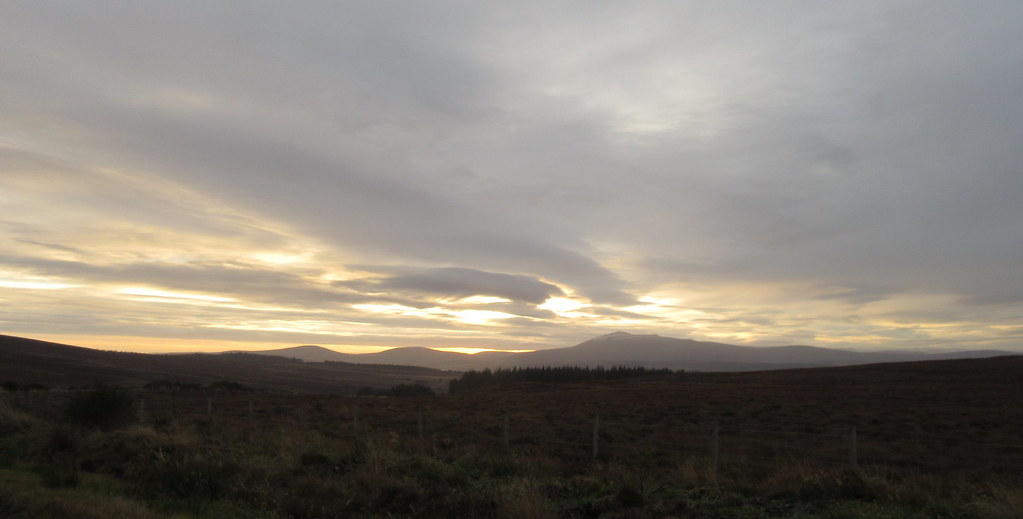 I parked in an oversized passing place just outside the back entrance of the Benrinnes Distillery and walked up a good track onto Baby's Hill.

Path up Ben Rinnes behind the distillery: 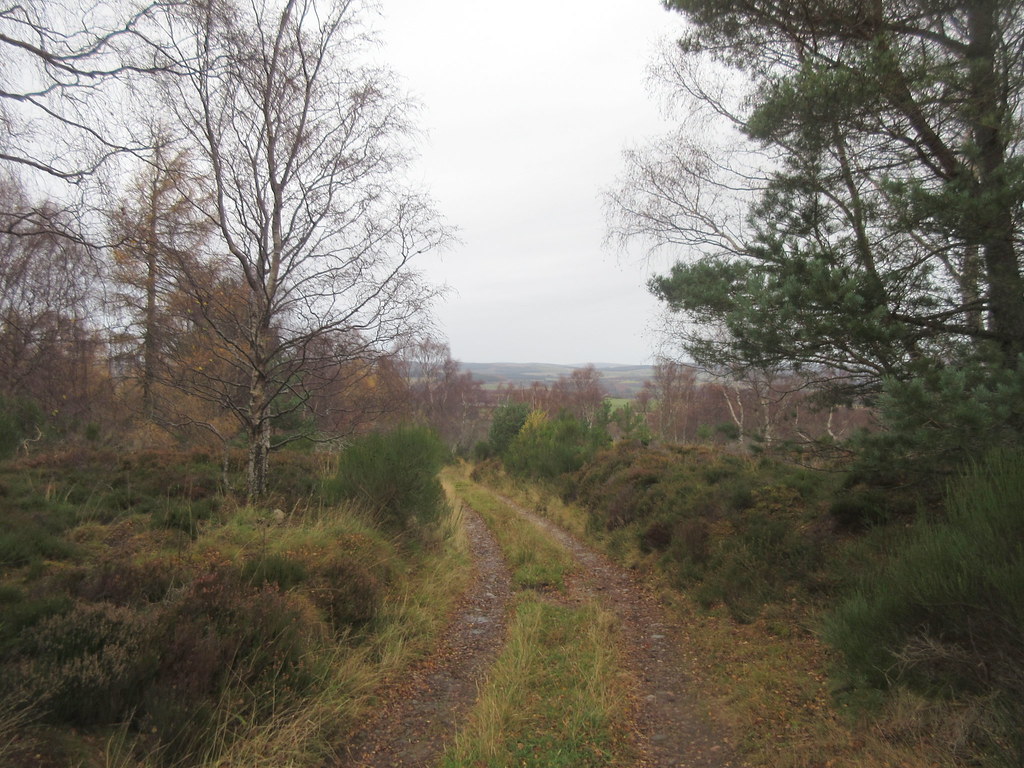 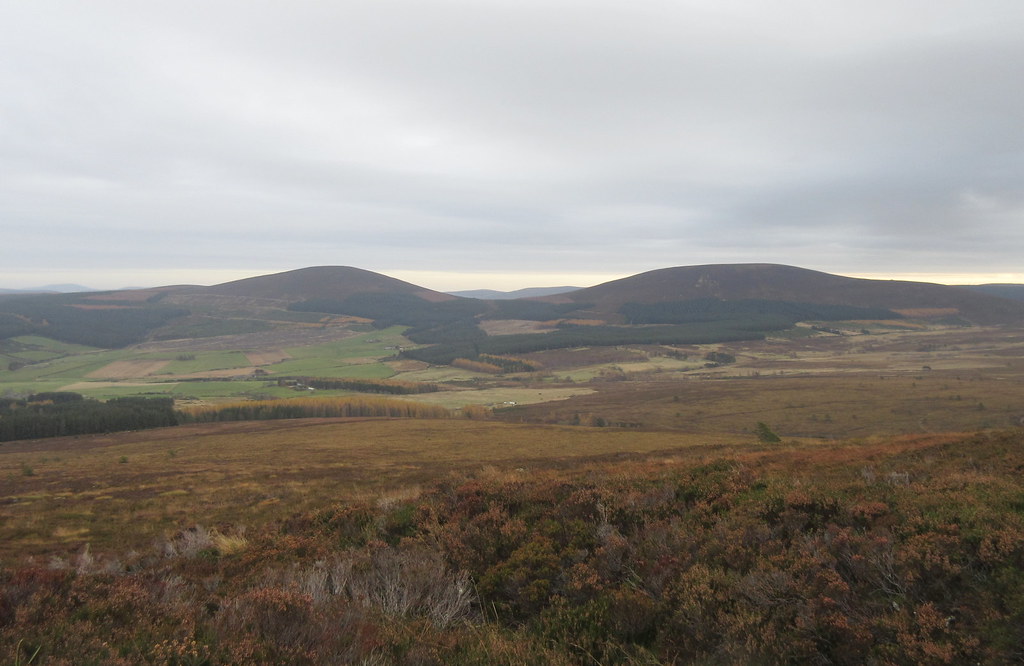 The track ends a short way above the 500m contour, but there is a faint path across the heather leading up to the ridge. My map showed a path heading directly over towards the Scurran of Well, but I couldn't see anything too obvious. 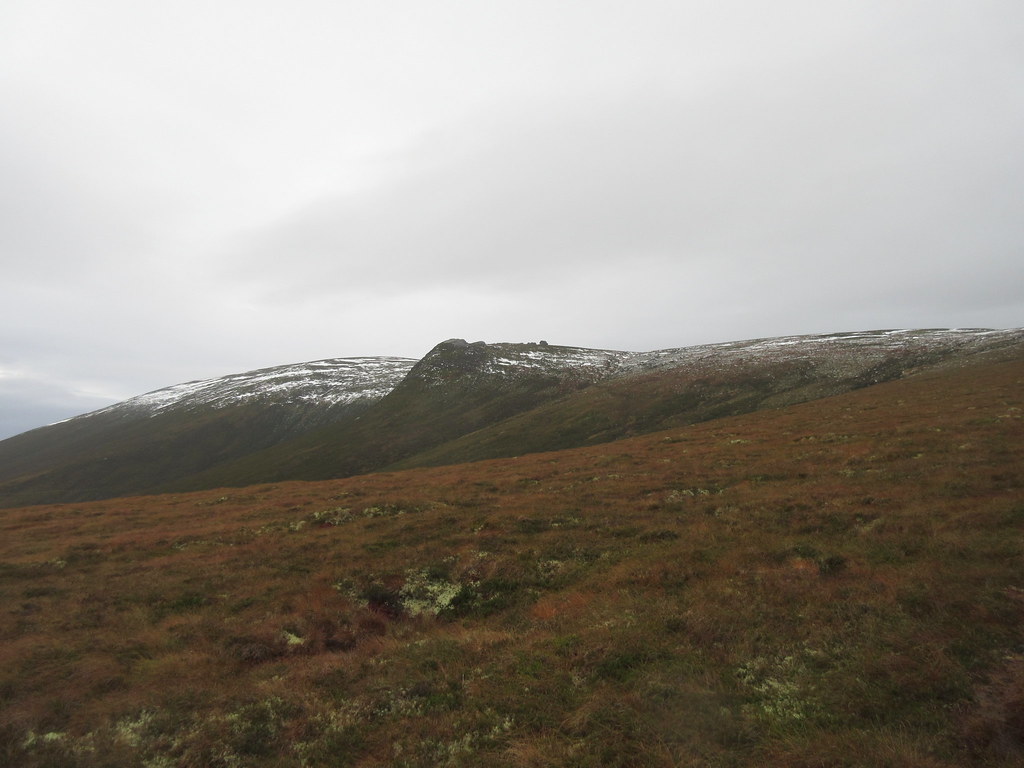 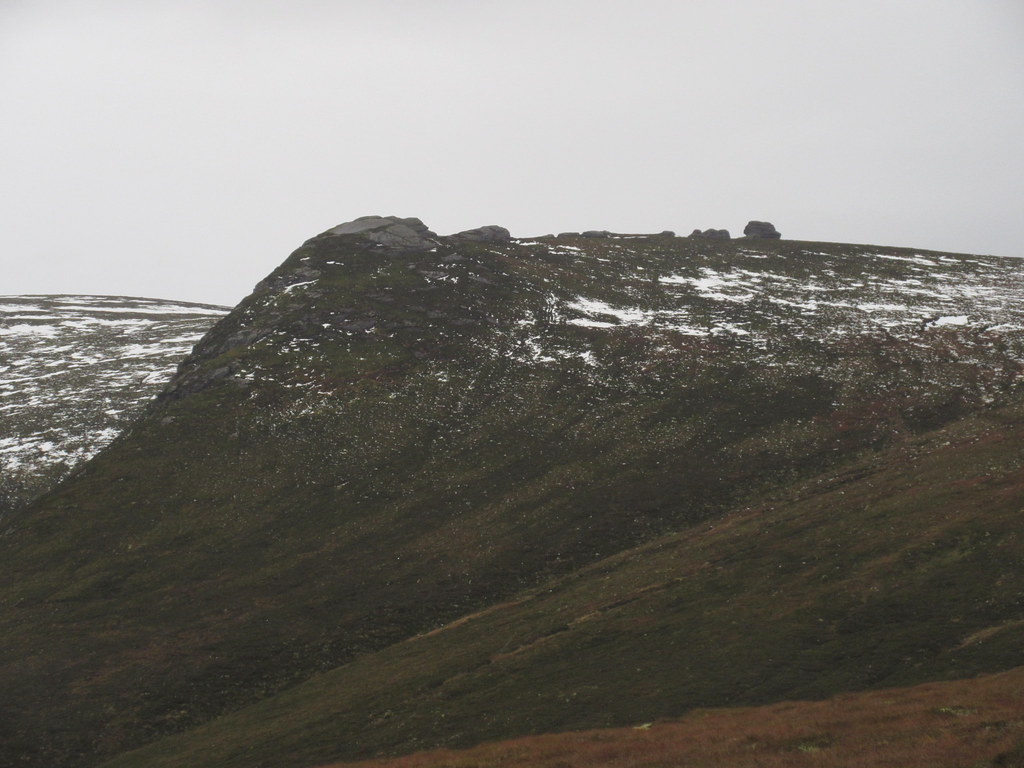 Once on the ridge, there were a few peat hags to hop (and a bit of newish snow) in order to get over to the tors of Lady's Chair. This and the Scurran of Well were my main reason for coming up this way - they are the most interesting bit of Ben Rinnes and I fancied a little look around. 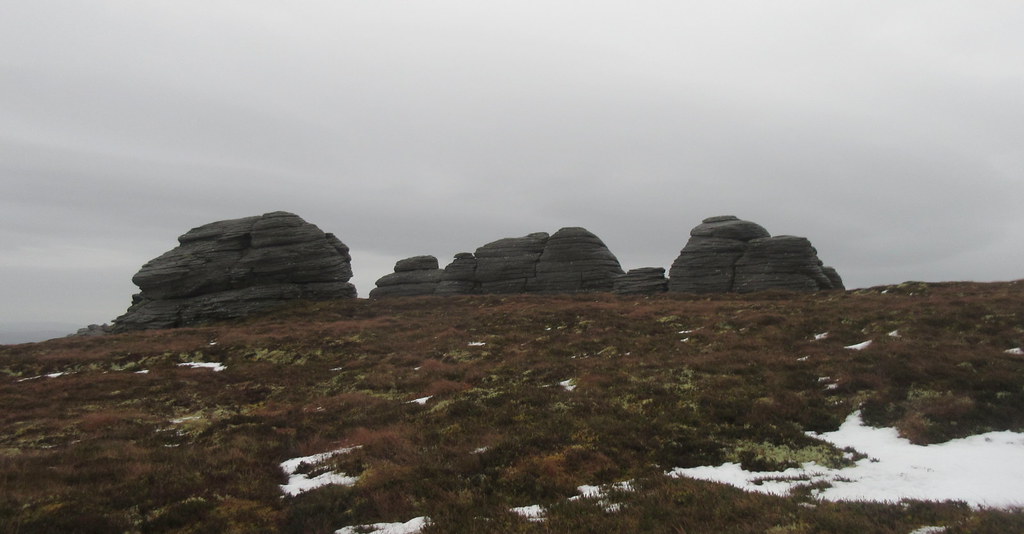 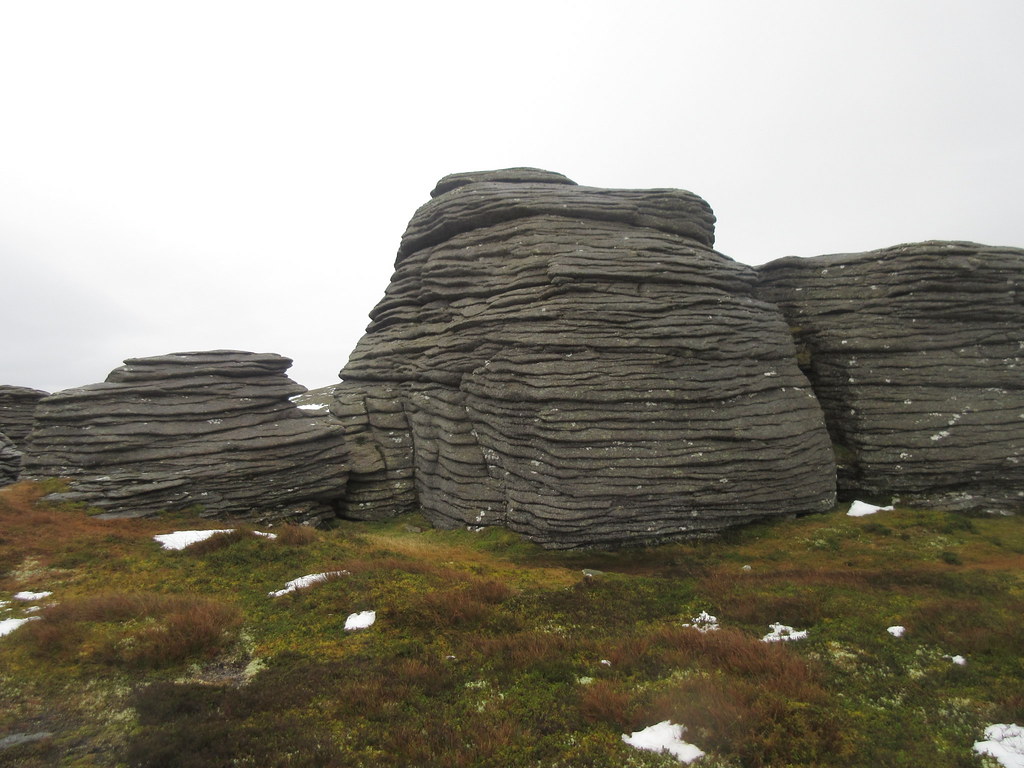 It was quite breezy with intermittent showers at the Scurran, but I found a sheltered spot for a break down the side of one of the tors. I climbed over one of the tors afterwards, but the wet granite was greasy, and it wasn't much fun. In the dry, this little area would definitely give Mither Tap on Bennachie a run for its money.

Looking down to the Scurran of Well: 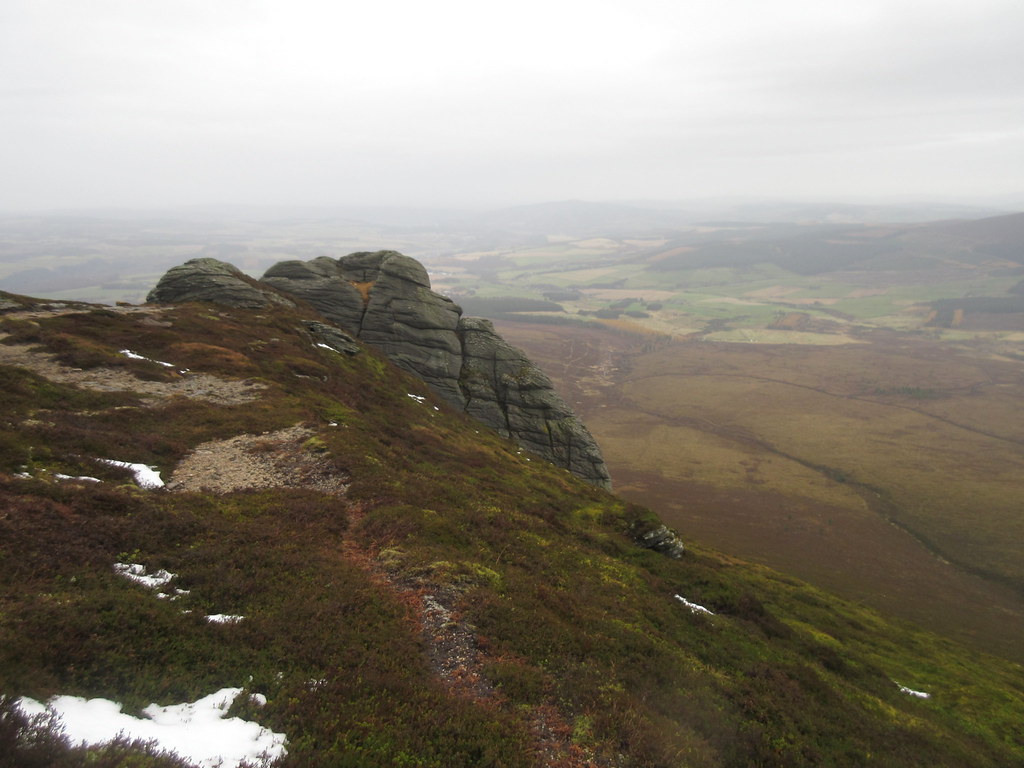 Looking back to Lady’s Chair and the Scurran of Well: 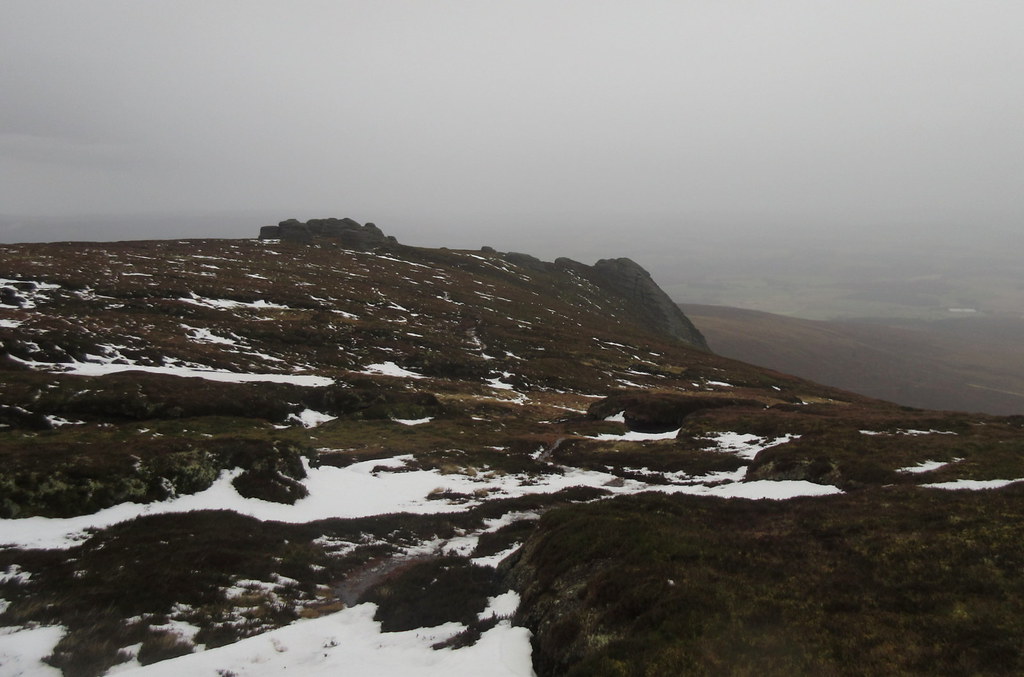 There are more tors at the Sgurran of Mornish, but as they weren't on the shortest route to the summit, I missed them out this time. A couple more short sections of hag hopping (with a bit of a path) led to much easier ground and the rocky summit area. While the cloud was swirling around, I did get some views to the SW, and the eastern end of Ben Avon. Glad I gave that a miss today! 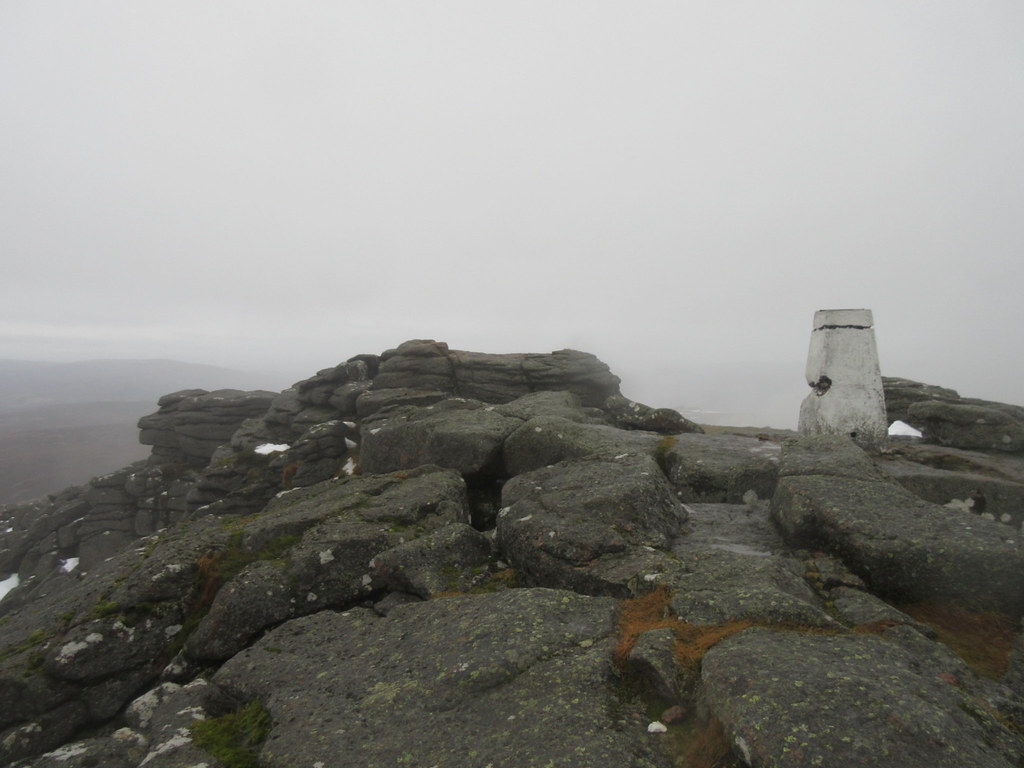 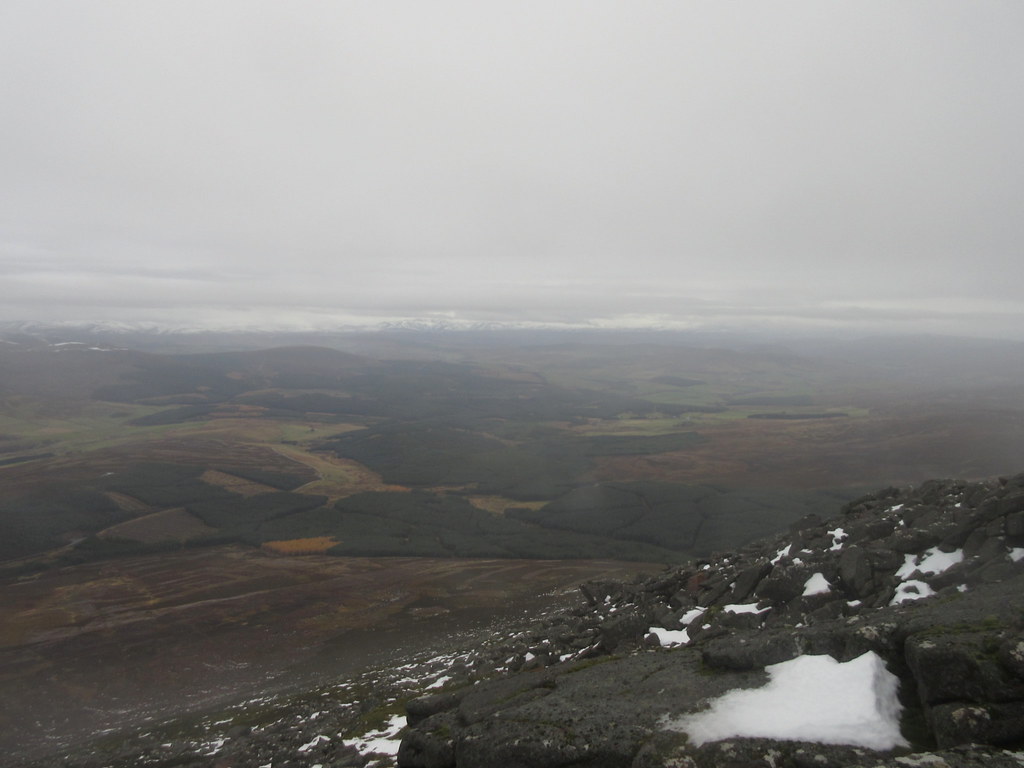 There were a couple of other folk on the top, but it wasn't hanging around weather. On the way down the normal route up, I passed a dozen or more people - one of the more popular hills in the area. 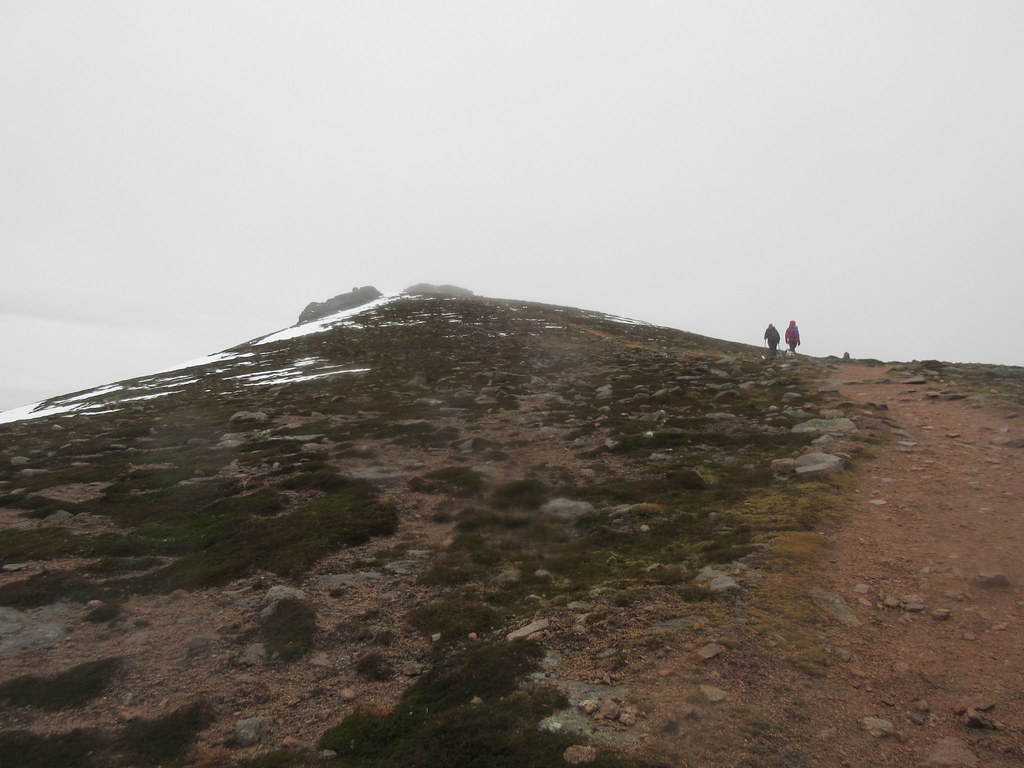 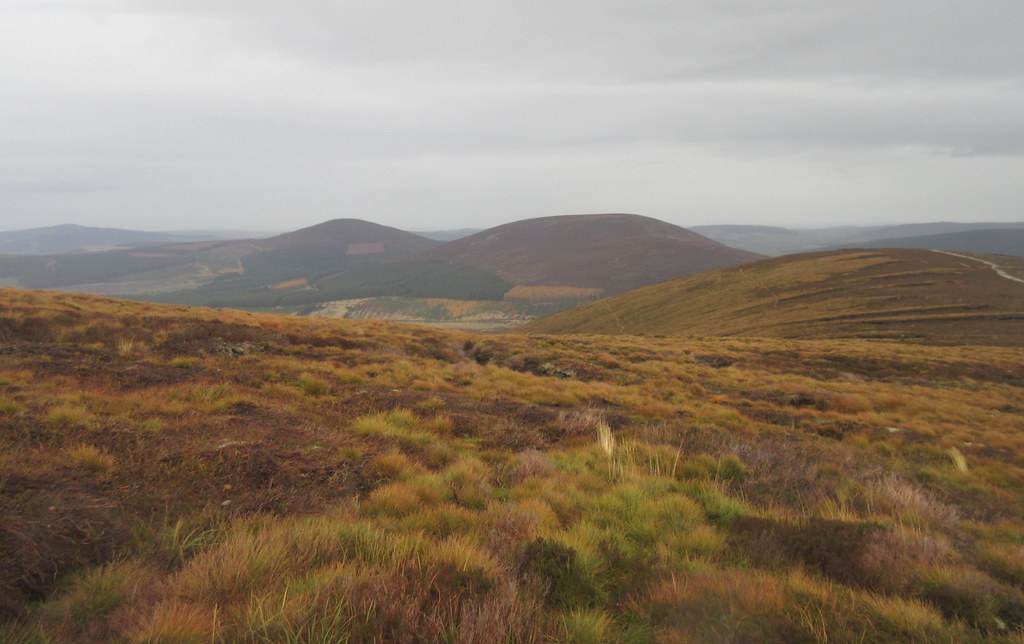 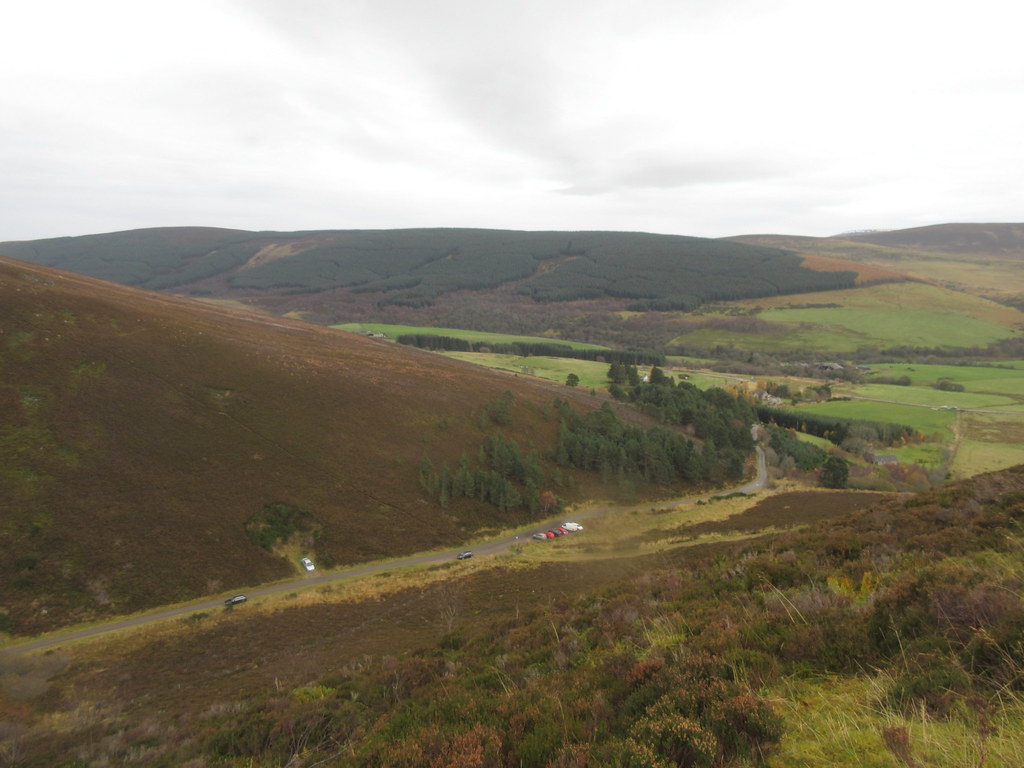 Soon I was crossing the road at the carpark, where I picked up the less used path up onto Meikle Conval. This was steep at first, but soon leveled out. The top of Meikle Conval wasn't bad for views, but was a bit soft and peaty to be much of a place to hang around. The path down to the col was pretty peaty as well. A fellrunner passed me here - in fact he had been heading up Ben Rinnes when I was about halfway down, so he was fairly shifting.

Back to Ben Rinnes from Meikle Conval: 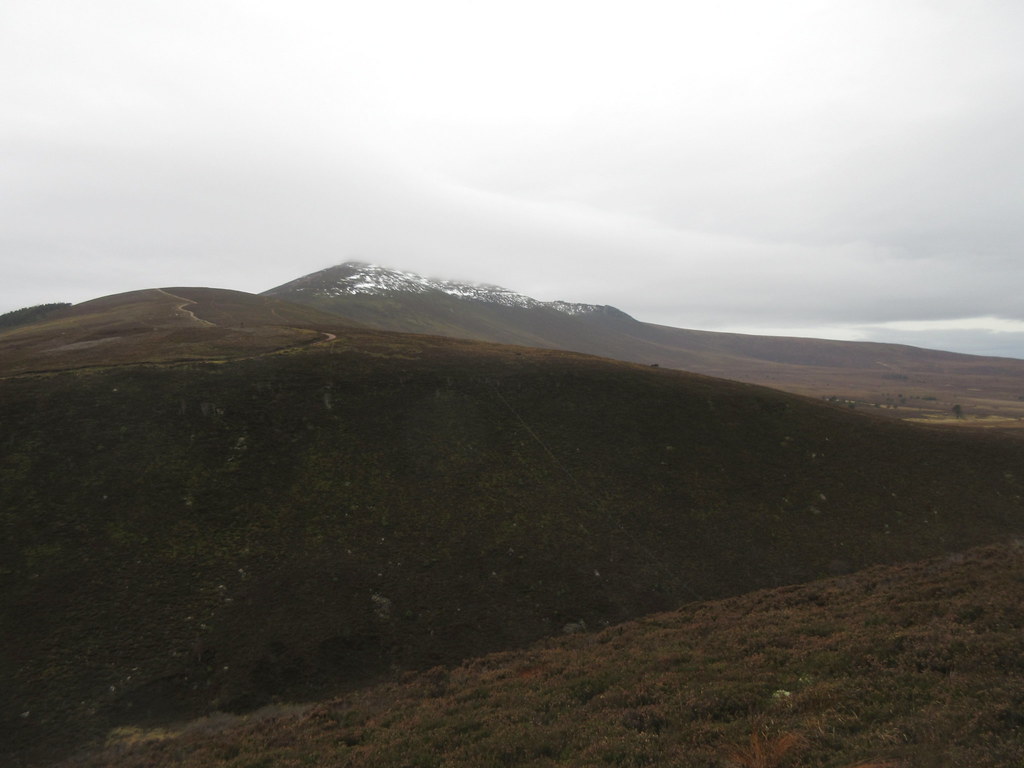 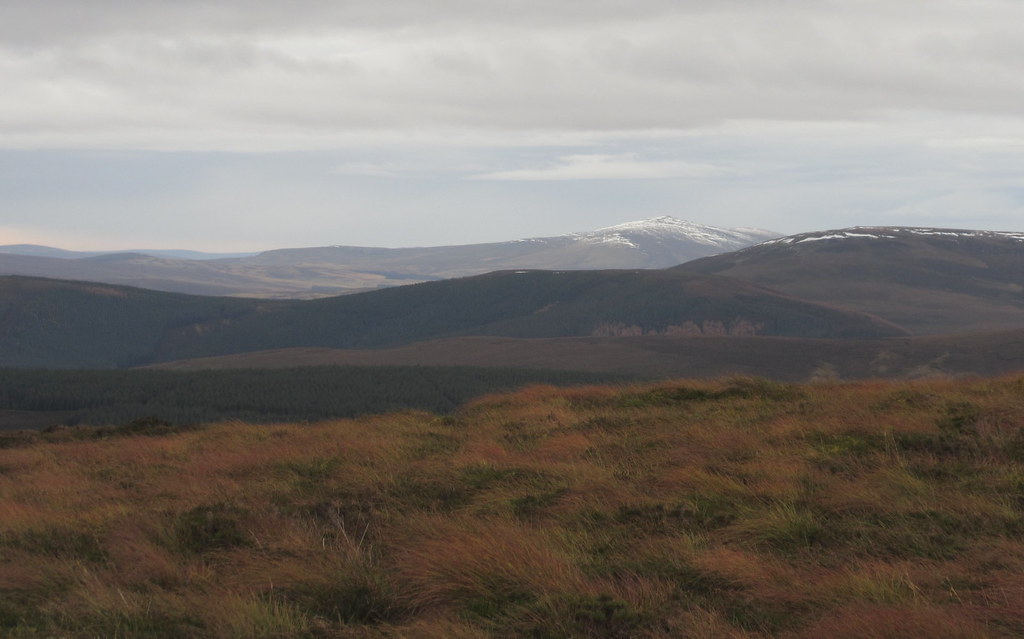 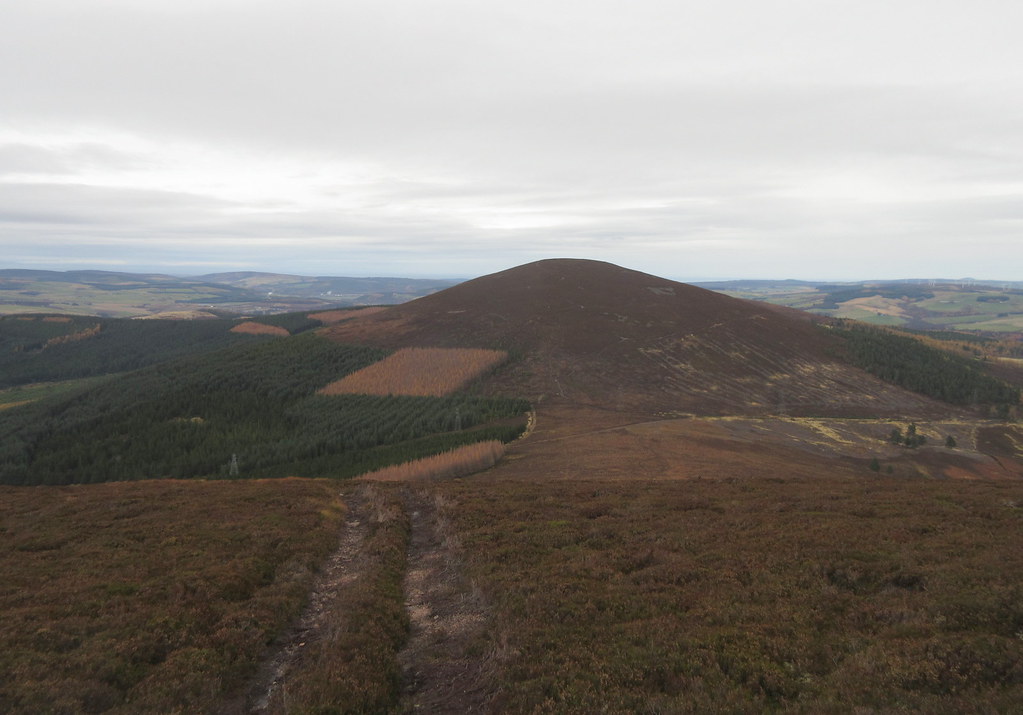 The track up Little Conval was much drier and firmer, and the summit a bit less plateau-like, although quite heathery. The walls of the iron-age fort are hard to spot close up, but a few piles of stones suggest the location. I rather liked the view down onto Dufftown as well. 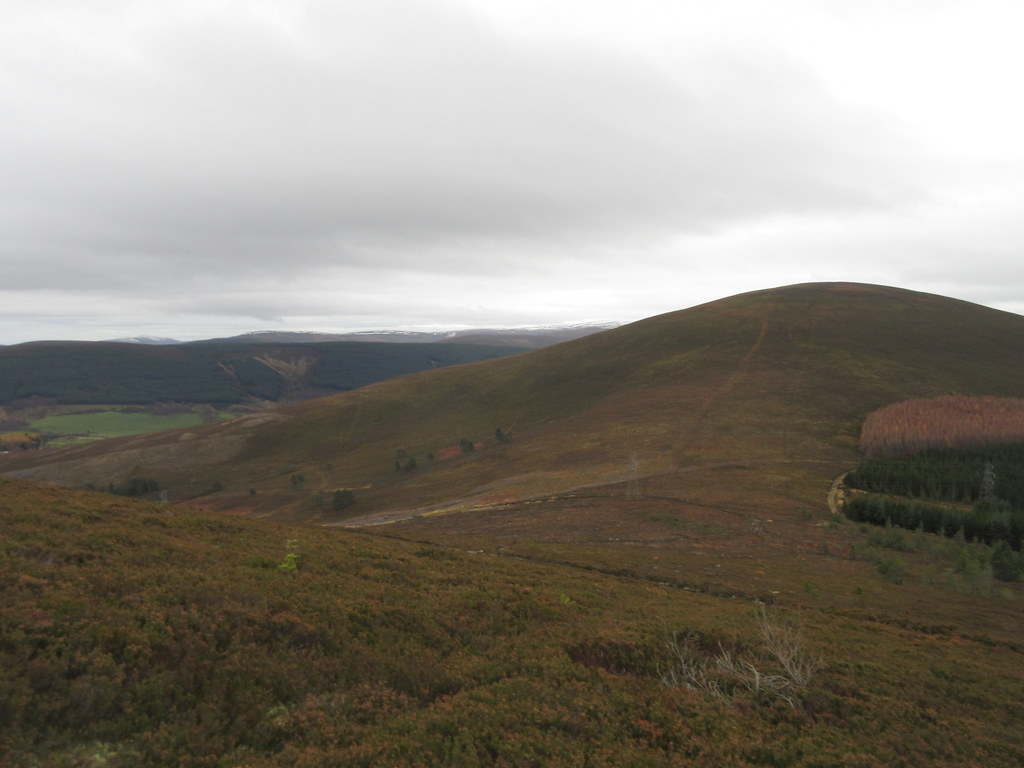 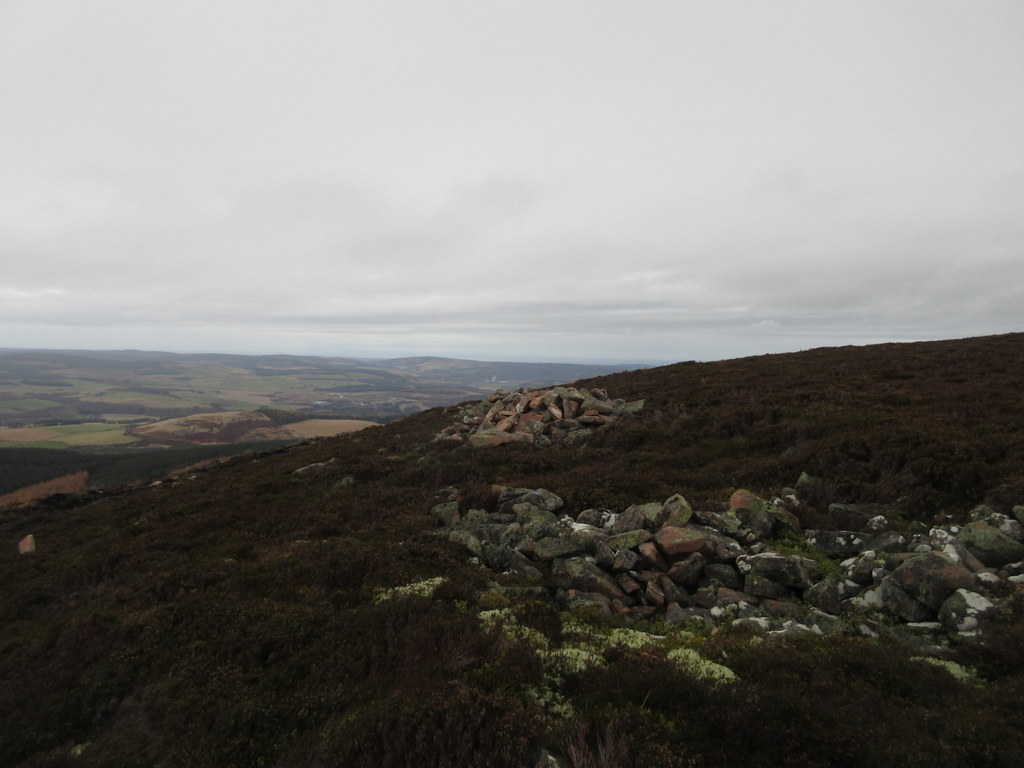 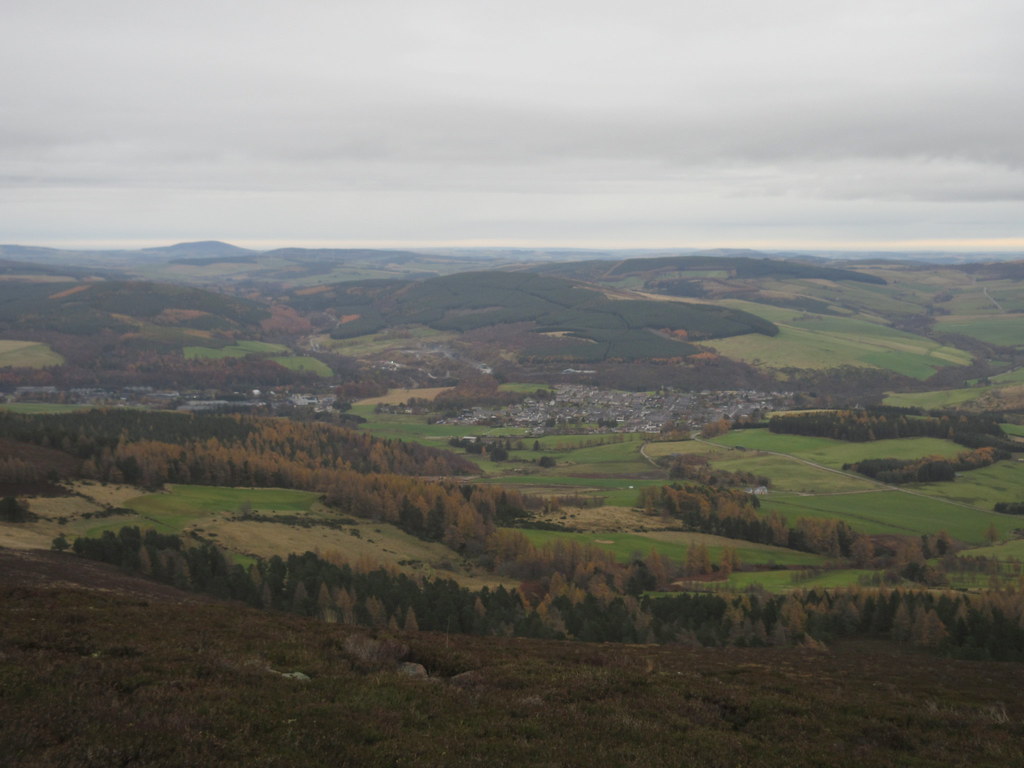 From Little Conval, I made a heathery descent to a forestry track on the western flank, which led back to Milltown of Edinvillie via a winding route. The woods were quite dense so there wasn't a great deal to see until I was level with Uppertown, where I took a shortcut through some fields to reach the village. It was a short walk through the village and up the hill to the car. I was glad to get back before the heavier rain and proper misery came on later in the afternoon.

Last look back at Little Conval: 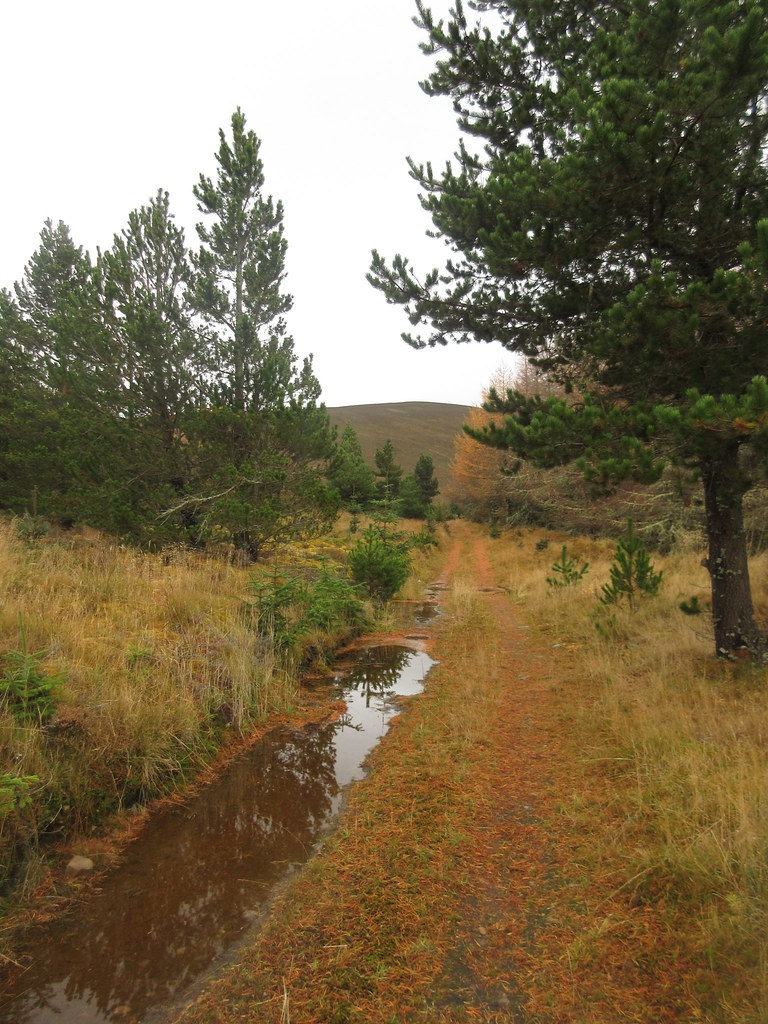 A good circuit that I'd definitely consider doing again on a better day. I quite like Ben Rinnes but have been looking for a longer, more interesting walk than the normal up-and-down to make it worth the drive. In fact since it's possible to get the bus from Elgin to Aberlour and Dufftown, the car isn't even a necessity.

We did this route on a sunny Saturday and it was excellent. It deserves to be an official walkhighlands route.
A couple of things, we parked at the back of the Distillery, there are spaces for eight cars or so and signs saying "vehicles left at owners risk".The footpath from the Baby's hill track is boggy and then very steep but worth it for the way it leads you through the interesting tors at Scurran of Well , next time I might try going straight up onto the ridge though . Getting from Little Conval to the forest track was quite an ankle testing descent , not long but be aware that it's there. But it's all good though because it takes you into the forest, I was expecting a tedious forestry trudge but it was a beautiful track winding down through the trees. Helped by the glorious weather I suppose but clearly very little used and a lovely finish.
So , Thank You, malky_c.