Bright and sunny but a little breezy

Bright and sunny but a little breezy


Although forecast to be very windy with -10c or so wind chill, the forecast for the south looked to be the best for the day. Had a relatively long lie before the drive of less than an hour down through New Cumnock and down the road to the reservoir. Parked in a wee layby at the side of the road at NS630083.


Afton activelog 6nov2016.gpx Open full screen  NB: Walkhighlands is not responsible for the accuracy of gpx files in users posts

Enough light just after 0700hrs not to require a headtorch. Walked along the road for a short way then took the Blackcraig track which winds its way up beside the Langlee Burn to Quntin Knowe.

From there headed south up to Blackcraig Hill

Then on to the summit

Some snow over towards the Merrick and co

Then on SSE towards Blacklorg Hill

It was bright and sunny but the wind was extremely strong. Was glad of the decision to keep the northerly wind behind me at the start. Even so it did make it very cold and difficult holding the camera steady for photos.

The reservoir looking blue in the distance

Then rather cold and windswept on closer inspection

Turned left and headed up towards Windy Standard 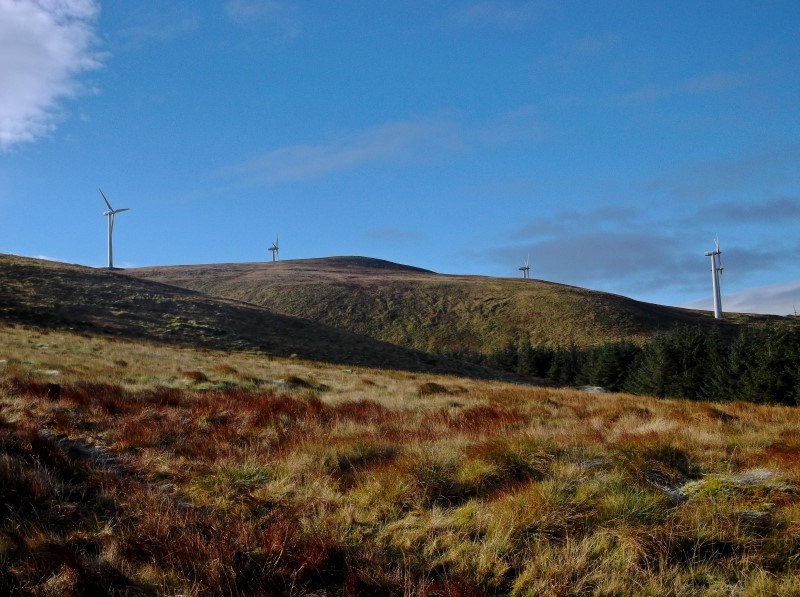 Decision time now as to whether to continue on towards the donald, Moorbrock Hill. Still plenty of time left although still extremely windy. This bit would also be an out and back.

Moorbrock Hill looking rather far away

Straightforward enough walk. Got to the northerly high point

but looked like the summit was more to the south east so walked down to the 650m point.

Now began the walk back into the wind – hard going at times but not quite as bad as I’d thought it would be. Was starting to get hungry though.

Up and over Windy Standard again

Down to the low point before the climb up Millaneoch Hill stopped for some lunch. Thought I’d try it out to get some shelter form the wind so unpacked the two person bothy bag. “Two person” being the operative words – not quite so handy for a solo walker. Did manage to prop up the other side with the rucksack and got some shelter for the wind to eat my sandwiches and drink some coffee. Fairly long break before restarting northwards up Millaneoch Hill then on to Wedder Hill

Over Lamb Hill and up towards Black Hill to pick up the forestry track which would take me back down to the road. Lot of tree felling in the area meant that the trees marked on the map no longer existed.

Craigbraneoch Rig stood out over to the east

Watched a bird soaring for a wee while – it was calling out and I could hear another bird over to the right but couldn’t see it. Had only brought the wee digital compact which has insufficient zoom. Back home listened to some bird sounds on the intranet and reckon it sounded like it could have been a Red kite but couldn’t be sure.

Back to the road and then the walk north to the layby. Passed quite a few parked cars but hadn’t seen any other walkers. Less than an hour to drive and I was home for dinner.

Enjoyed that, especially as I have a vested interest

Contemplating following your route this Sunday, however am concious about the lack of daylight hours

Do you think it would be possible to start at Craigdarroch and head straight up Blackcraig?

Fife Flyer wrote:Do you think it would be possible to start at Craigdarroch and head straight up Blackcraig?

I did wonder about this when planning the route but the map suggests a ford rather than a bridge and the direct route looked as though it had crags hence the reason I opted for the longer route. However, see the link below which mentions a bridge and a slightly more direct route ? cheers

Did see the other WR and read all the other ones as well, have plotted out my route and hope to do the round in about 7hours - conditions and weather permitting of course

Aw naw, there's another one getting right into the old Donald bagging!!!!

Only on a Donald could you see a wind turbine growing out the top of a trig pillar!

Fife Flyer wrote:Enjoyed that, especially as I have a vested interest

Contemplating following your route this Sunday, however am concious about the lack of daylight hours

Do you think it would be possible to start at Craigdarroch and head straight up Blackcraig?

That was the route I took up Blackcraig - remember it being rather gruelling but that was partly due to semi-frozen grassy tussocks.
http://www.walkhighlands.co.uk/Forum/viewtopic.php?f=9&t=60288

Good timing for me, RH as I'm planning on going up there again on Friday - nice to see the absence of snow