Birthday with the shepherd

Birthday with the shepherd


The Indian summer of 2016 is officially over and we have entered the period of depressing, wet, cloudy weather, when sunny mornings are a dim memory

But I was desperate to get out on the hills for my birthday celebrations - round number, I'm officially a lady in her late years!
Old I might be but I'm still just as feisty and going up a wee hill on a gray, depressing day was exactly what I wanted as a birthday gift!
Sunday was predicted to be a washout, so Saturday seemed the only chance for a climb. Sadly, Kevin was suffering from man flu (ahhh, all the men know what I'm talking about... blocked nose, sneezing, headaches, etc.) so i didn't want to force him up anything big and steep. Plus it had rained heavily the previous night and I expected water everywhere.
Meall a'Bhuachaille is an easy Corbett, probably one of the easiest to climb in the north-east of Scotland, maybe apart from Ben Rinnes. It's also extremely popular with tourists, but to be honest we didn't expect too many Sunday walkers heading up - weather was far to gloomy!
It was my third visit to this hill, our usual route is counter-clockwise, with the addition of Creagan Gorm:

Track_MEALL A BUACHAILLE 12-11-16.gpx Open full screen  NB: Walkhighlands is not responsible for the accuracy of gpx files in users posts
We started from Glenmore Lodge and walked through the forest to the Green Loch. Surprisingly, not much water in it, I had seen it full to bursting in the past, not so much today: 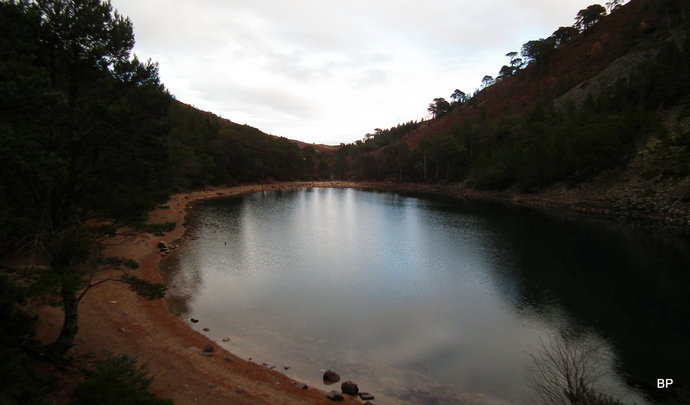 The day couldn't be more gloomy and depressing, so dark and sad

Kevin headed up the path despite his man flu: 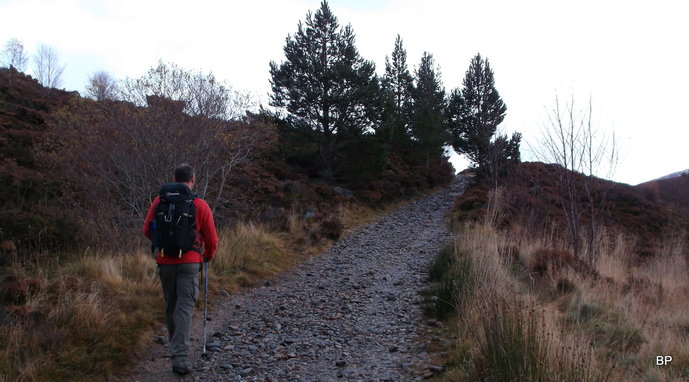 In places, the path was not a path any more, rather a deep stream: 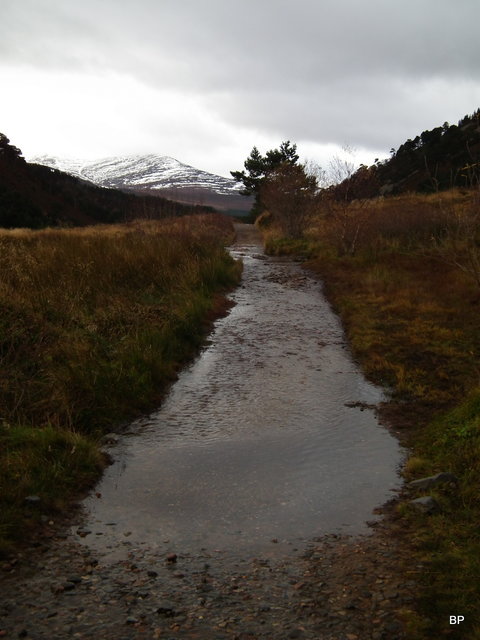 I was hoping to see snow (Wyvis had been all white the week before) and yes, there was some on the higher slopes of the Cairngorms, but the temperature reached +10*C down in the glens, so not much chance of the white stuff to survive for long... 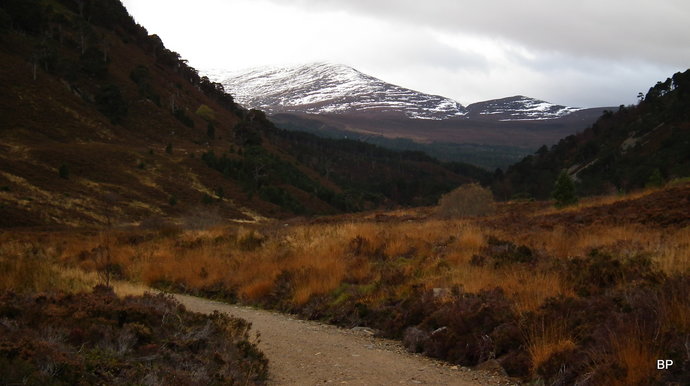 We walked past Ryvoan Bothy and started the ascent. Usually we stop by the bothy for a photo session, but there wasn't much to photograph this time, very poor light and low cloud. At least the wind was not as bad as earlier forecast.
Ryvoan Bothy from above with the slopes of the Cairngorms behind: 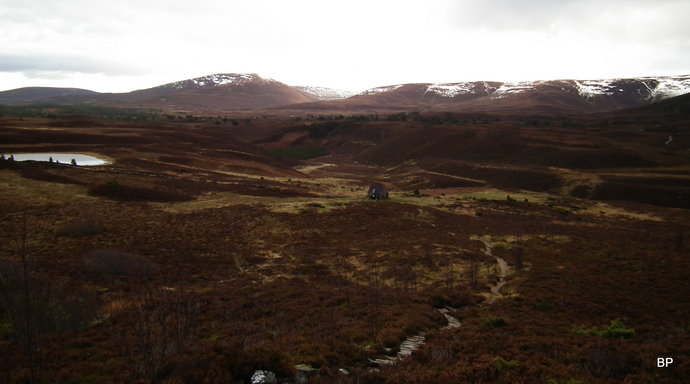 To the east, into Moray, weather was much better, even some sunshine over the hills:

Panorama - looking south-east from the slopes of Meall a'Bhuachaille:

As we gained height, we saw the cloud descend on "our" hill and we knew there was no chance for any summit views, so we stopped for a short photo session, just as long as we could see anything at all.

The Cairngorms in full glory, An Lochan Uaine visible in the trench of the pass to the right:

I always fancied Bynack More in full winter conditions, but I'd prefer to have a better day for it. 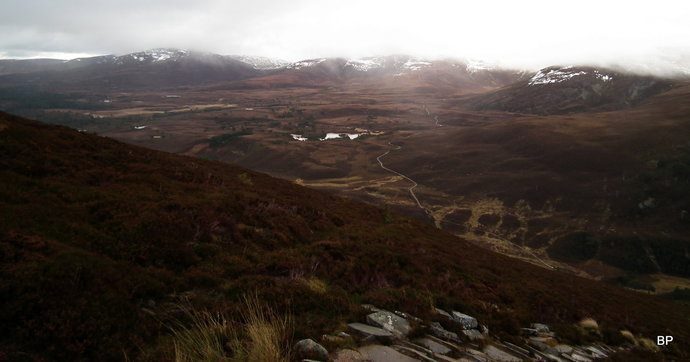 As soon as we entered the cloud, the atmosphere became even more depressing, though I tried to lighten up the spirit by playing hey-ho happy birthday girl

Views from near the summit

We arrived by the cairn surprisingly quickly and here was a good excuse for a break, cup of tea and apfelstrudel (recipe the courtesy of my grandma). Lucy was chuffed because she has just climbed her 30th Corbett! Kevin was not chuffed at all, 'cause he was running out of Fisherman's Friends 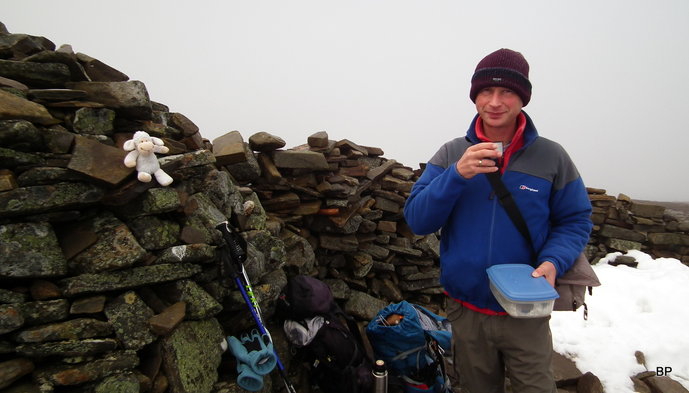 A lady in her late years posing on the summit of Shepherd's hill: 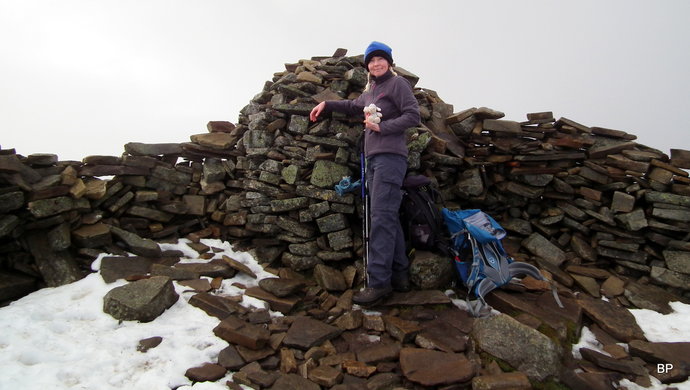 We sat by the cairn for quite a while, waiting for the cloud to shift, maybe we would get some views, but nada. Last time we climbed this Corbett in winter conditions, we met a Brocken spectre on the summit, but this time no such luck... 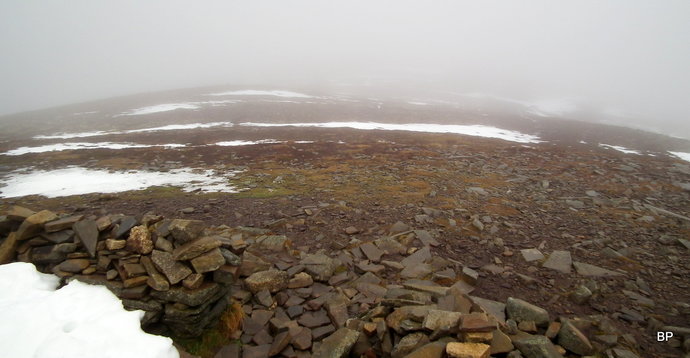 Eventually, we packed up and began descending the SW slopes on a good path. Here we stated to meet people coming up from this side. Some time later, when we walked out of the cloud, we saw the first views to this side, with Loch Morlich taking the center stage:

It was only 11:30 and I was reluctant to go home so early, so we decided to nip up Creagan Gorm, hoping that maybe this one would stay cloud free for us, as it's much lower than the Corbett:

From the col between the two hills, we could see the gloomy Cairngorms to the south:

...but by the time we reached the top of Creagan Gorm, weather decided it didn't like us after all. The cloud descended again and all we got as a reward for the additional meters climbed was... a path in the mist...

...and one very grumpy man with man flu! 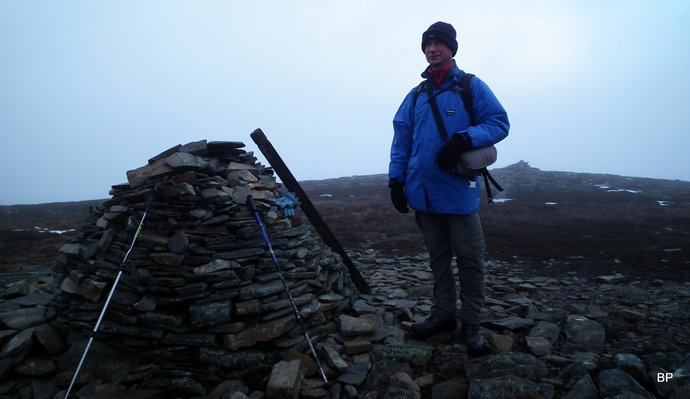 The clag stay put as we descended back to the col, but eventually we walked out of it, just to "admire" the Cairngorms in their most sulky mood:

The only highlight was watching the cloud forming weird shapes over the tops of the Cairngorms:

Back to Meall a'Bhuachaille, still in clag, I doubt it cleared at all that day:

I wish we had better conditions for this walk but one can only take what's given and the nature was reluctant to give us much that day...
......
A few days have passed and thankfully, Kevin is recovering from his virus and I'm getting used to being an old fart. Right, time to pull up my sleeves and jump on my rowing machine

......
For those interested in winter views from Meall a'Bhuachaille, here is my 2012 winter report from this Corbett with Brocken spectre photos

Re: Birthday with the shepherd

You're right it wasn't the best day to be out ... we tried Geal-charn Mor the same day, with 4 dogs - only to find the first 2K went through a pheasant nursery and just when we thought it would be OK to give the dogs some freedom we met sheep and could see they were spread out right up the hill

) It's always good to get out though

Re: Birthday with the shepherd

You're right it wasn't the best day to be out ... we tried Geal-charn Mor the same day, with 4 dogs - only to find the first 2K went through a pheasant nursery and just when we thought it would be OK to give the dogs some freedom we met sheep and could see they were spread out right up the hill

) It's always good to get out though

Nah, it wasn't the best day out unless you were somewhere in Moray... Hopefully next weekend will be better, I'd like to re-visit Wyvis when it's covered in snow