20100820.gpx Open full screen  NB: Walkhighlands is not responsible for the accuracy of gpx files in users posts
Had a Granite City Hillwalkers meet at Kinlockleven for the weekend and had taken the Friday off to get some hills in on the way. However the forecast was dire: 10-30% chance of a cloud free Munro on Friday, followed by two less than 10% days, with rain and gales predicted! Also had a sore throat developing so was seriously considering not bothering given my recent experience on Skye. So spent Thursday night drowning my sorrows rather than packing. In the end the forecast on Friday hinted that the afternoon might be OK in the West so the bagger instinct kicked in and decided: what the hell, what’s all the wet weather gear for anyway.

Didn’t leave the house till 10:30am so wasn’t on the hill will 2:00pm. But having driven through some foul weather the sky was indeed brightening up. So togged up in full wets despite there being only a slight drizzle and set off, having found the suggested parking area just North of An Dubh Lochan. The path was clear enough to start with but soon was very overgrown with bracken and difficult to follow. Then soon came to a nice new barbed wire fence right across the intended route. Scouted around for a gate or stile but in the end just had to clamber over. Being 6’2” helps but others should be aware of this new obstacle – and having started so late I wasn’t prepared to go searching for a more accessible route.

Once over the fence the path up the hill was fairly clear if very boggy. The view was to Meall Cain Dearg, the Northern guard to Stob a'Choire Mheadhoin and not the summit. But the rain soon stopped and the sun was even putting in an occasional appearance. Hadn’t spotted from the map that Loch Treig was a reservoir but the indications of the dry start to the summer were clear from the tide line around it. Unfortunately the path I followed took me well to the West of the direct route and it just petered out in boggy wilderness some way short of Meall Cain Dearg. The way up Meall Cain Dearg was clear but it is also very steep – hands needed as well as feet. And today it was slippery and boggy too. Once over this obstacle the summit was still not in view – it’s not till the next false summit a mile on that you can actually see you destination(s). 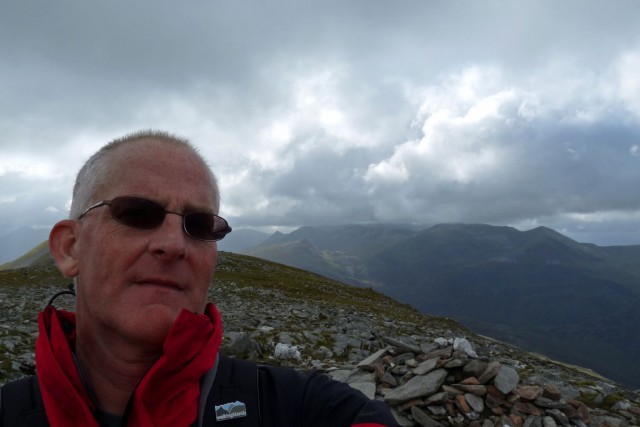 Notice the badge? Maybe not the first WH one on a Munro but one of the first :)

After the final steepish section got to the summit around 4:15pm and was impressed with what lay ahead: Stob Coire Easain & a decent view of the Grey Corries & the Mamores. And the true nature of Stob a'Choire Mheadhoin itself became more apparent. A quick bite to eat, as few photos and onward. Half an hour latter was atop Stob Coire Easain and even better views. The low sun and clouds to the West made for some atmospheric views which my photographic skills weren't quite up to capturing.

Another from the bealach

Then back the way I came – by the time I was atop Mheadhoin again the wind had really picked up. Probably gusting to 50mph at the top, but thankfully once I was below 900m again it some fell away. Got some nice evening light, but the sheen was taken off the day by a couple of things. Firstly after several near misses I finally succumbed to the bogginess, slipped & ended up with a wet left leg. Then after negotiating the barbed wire again I got midggied. Swarms of the little b*****, and even worse when I got to my car I found I’d left the driver’s window down – so they we in the car as well! I must have a about hundred bites – ears, eyelids, face, scalp, neck, arms, legs, wherever. Now on my second tube of anti-histamine cream!

Decent light at last as I made my way back to the car and the waiting midges... Full flickr set here

Nice report and pics Alistair - bet your glad you made the decision to get out, not horrendous weather.
I hate it when the weather guys say it's going to be awful, so I plan to do chores indoors then it turns out to be fine after all.
Shame about the midges, sounds like they were waiting for you to get back and ambush you.

Nice report and pics there Alastair

Alastair S wrote:I made my way back to the car and the waiting midges

How awful about the open car window and the car full of midgies! Ugh! You have my sympathy on that one...

I found it a horrendously boggy trek to get to those hills from the carpark and have to admit to not even looking at that route up the nose... I just contoured the hill way below it and ascended the west side after I'd passed it... was okay doing it that way for anyone who doesn't fancy the nose on a wet day.

They're a great pair of hills though aren't they? When I did them, I changed my mind about going back down the west side of Easain (looked very steep and I couldn't see much in the clag) and went down the SW ridge curving round to Lairig Leacach and walked back out to Corriechoille - my parents and friend Richard were picking me up anyway so a quick text re-routed them after their day out touristing...

Can't see your pics yet wherever they're hosted so will have to have another look from home...

I ordered a midge jacket from readyto leave.com and it arrived the very next day. No more bites for me!

hmmmm... a fashion must

I do have a midge head net thingy but had left it at home - do'h! Lesson now learnt: anyway West in summer requires the whole arsenal.

mountain coward wrote:They're a great pair of hills though aren't they?

Yes - the initial impression isn't that great due all the false peaks but once you're up there you get good views and Stob Coire Easain is really impressive from Mheadhoin.

mountain coward wrote:... went down the SW ridge curving round to Lairig Leacach and walked back out to Corriechoille

mountain coward wrote:Can't see your pics yet wherever they're hosted so will have to have another look from home...

They're on Flickr - you must have a fierce firewall in place.

Lovely. Some of the best photos I've seen from those hills I think.

Nice pics - looking to redo these hills with the local Graham and a corbett sometime.

Frosts may nip the midge off soon

Nice one Alastair - the 2 day circuit I did over these two in April to the bothy below Stob Ban and back out the next day over the Innse Corbetts and the Graham probably ranks as my best hill experience ever. An awesome couple of days and stunning weather to boot. No midges back then but I did get a tick on my arse!

My avatar pic shows me atop SCE looking back to SaCM.

Thanks for the kind comments guys & gurls

What I didn't mention was that I had a sore calf for the last couple of hours. At the time I thought that I must have strained something. The next day it wasn't nearly so bad and I completed a 20km walk without a problem. But over the next few days it got worse and the calf was swelling up. So went to the docs yesterday and it looks like I've got a case of deep vein thrombosis (aka second class syndrome). Won't know for sure till I get a scan on Monday but I'm already on medication for it. So looks like I won't be out on the hills for a bit but I've caught it early so don't expect it to be much of a problem. In the mean time I got lots of photos to fiddle with, so expect a few more reports from me yet

Ugh - DVT - ouch - injection in your tum coming up - I can assure you it hurts quite a bit! It's also embarrassing if you're growing a bit of a tum (as unfortunately I am since I got much older

mountain coward wrote:I can assure you it hurts quite a bit

mountain coward wrote:Ugh - DVT - ouch - injection in your tum coming up - I can assure you it hurts quite a bit!

Had 4 so far - a bit sore for 15 mins or so but so wears off (he says through gritted teeth). Hasn't had any effect on the sore leg though - must be early days I guess...

I must have been lucky - I just had the one jab!

Now had the scan & blood test and thankfully both are negative

Hopefully a bit of rest will see to the rest, but booked another visit to the docs just in case...