A stunningly fine day and I drove along Loch Achray took the turn off to Loch Katrine pier, parked at the appointed spot and followed the beautifully built and well signposted "Ben Venue hill path" across the specially built bridge over the Achray Water and up through the forest. 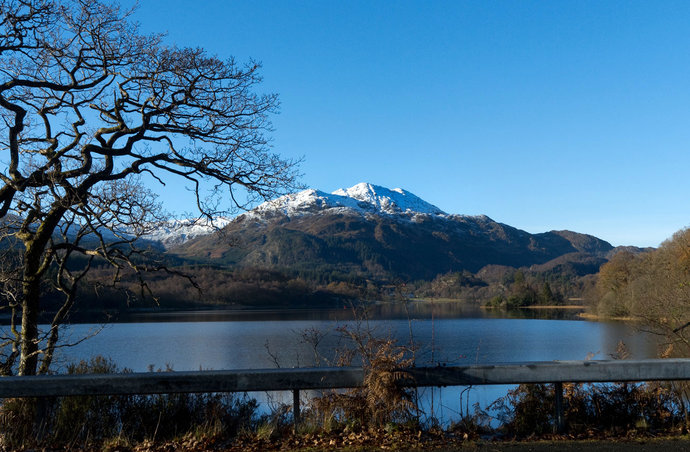 Classic view of Ben Venue across Loch Achray
Although it was not long before noon, it felt like early morning as the sun had not yet got down here - perhaps it never does at this time of year - and everything was cold and frosty 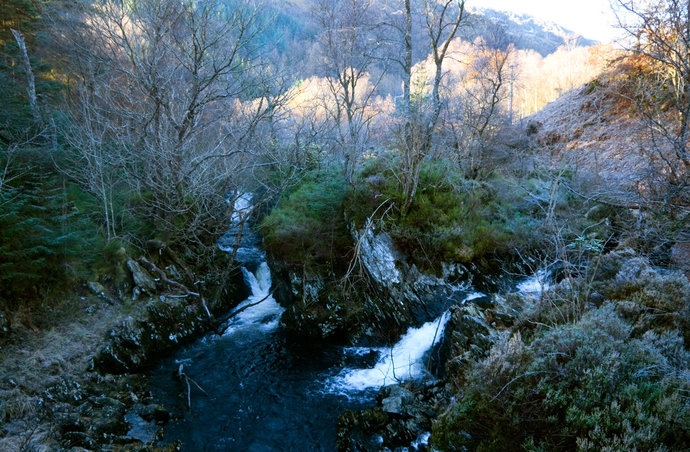 Looking up the from the bridge 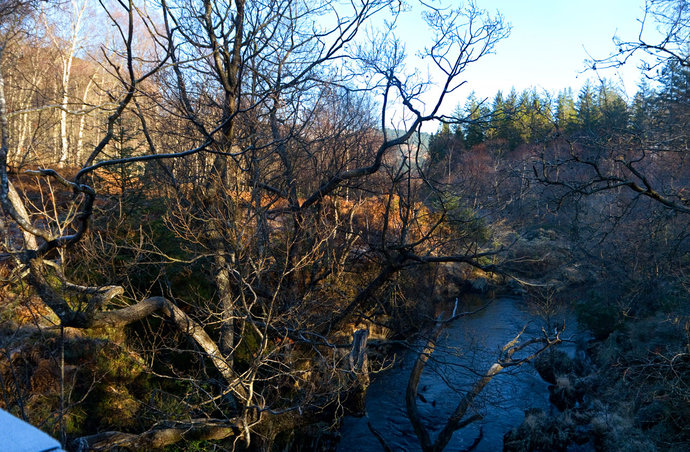 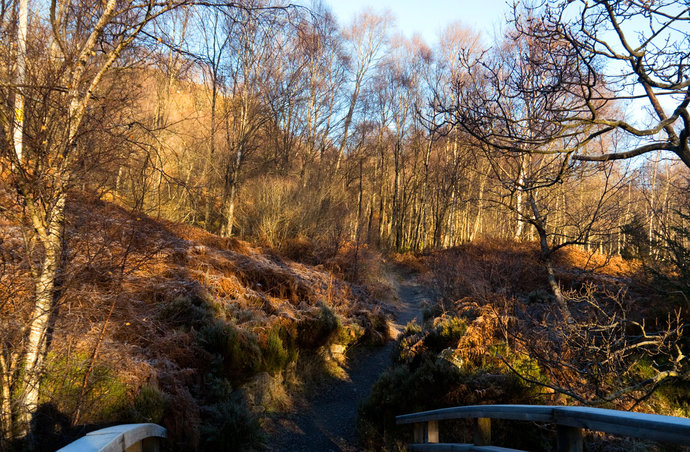 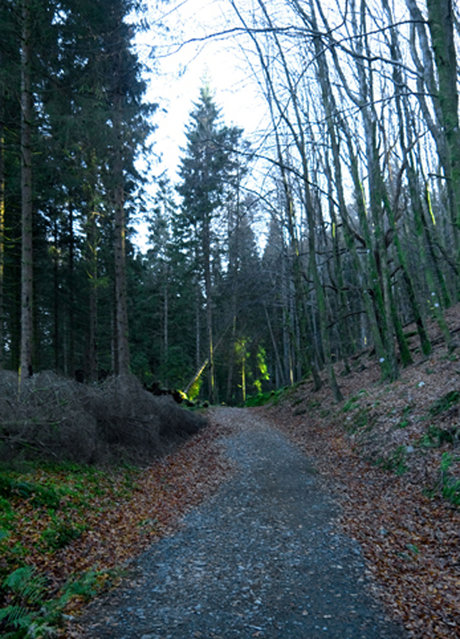 Looking up the well made track 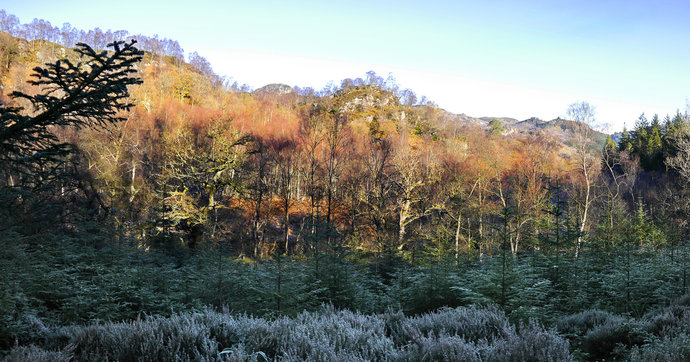 - with fine views back to Ben Ledi 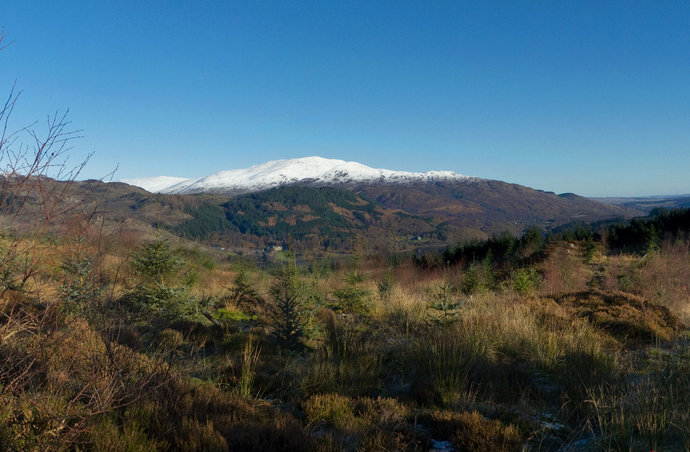 Beni Ledi from In the forest 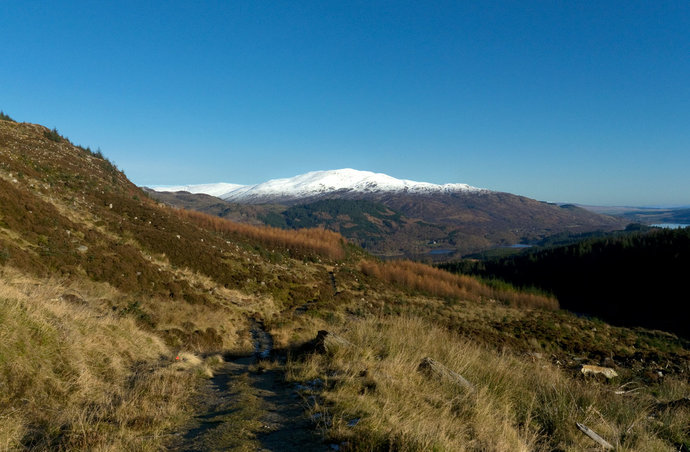 and from higher up where the trees have all been harvested 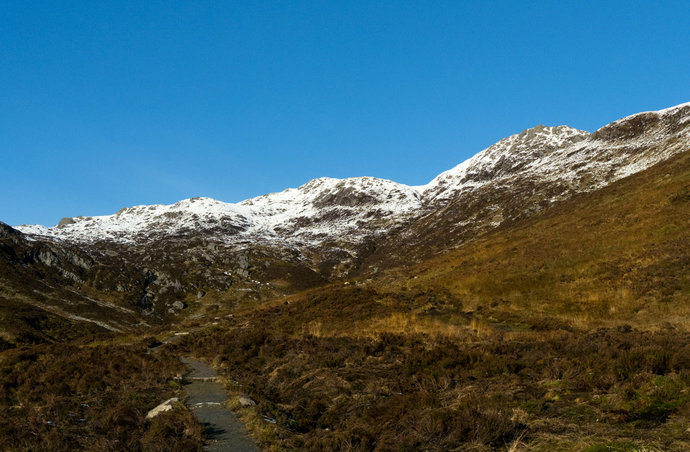 Gleann Riabhach turns sharply North and the hill comes into sight: the path is still excellent at this point
Continuing N , there is a sharp rise of 50m or so and a here large group of pathbuilders were at work among copious helicoptered in white bags of stone (visible in the photo). I climbed past them without difficulty but above the rise the path deteriorated into a mix of soft snow hard ice and deep bog

Progress became glacial. There were various other sets of footprints - I tried following one set but it didn't help - but like me they obviously had no real idea of where best to go. At the top though they all converged -- made me think of Monty Python's "100m for people with no sense of direction" - but in reverse

Near the top there was less heather and progress was better. I followed some footprints East through a depression South of what I thought was the top, but I had forgotten there are two tops and coming round the corner I realised the actual high point was a 50m or so further N . When I eventually made it to the cairn the views were superb - and the panorama of hills incredibly clear. There had been absolutely no wind lower down - and here only a breath - slightly droll considering the havoc wrought further South by storm Angus.
Here are the summit views going anticlockwise:- using lines drawn on Anquet I have tried to identify the hills Down Loch Venachar to the Ochils 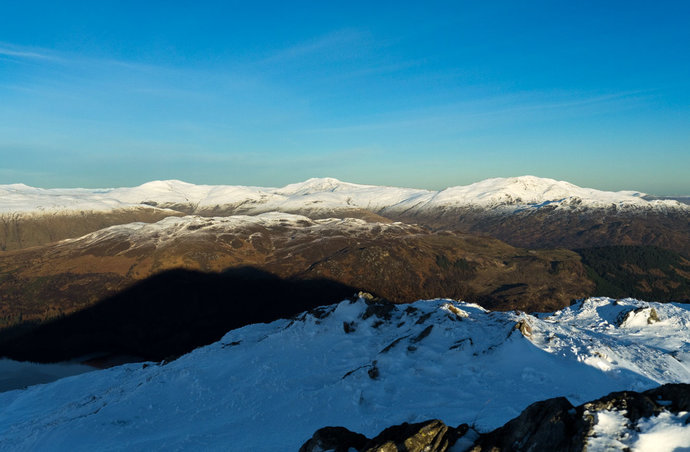 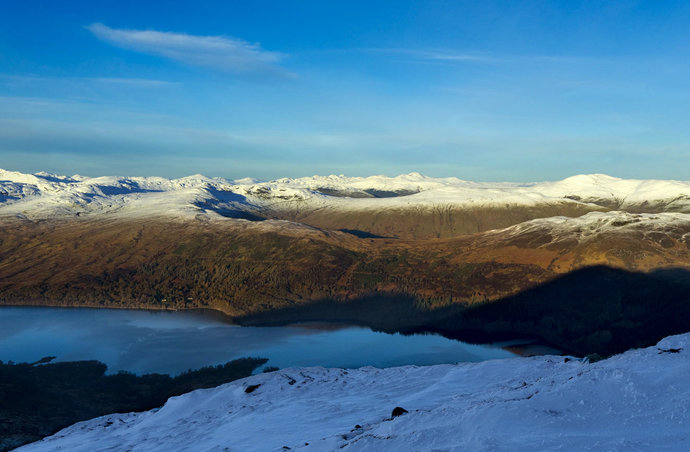 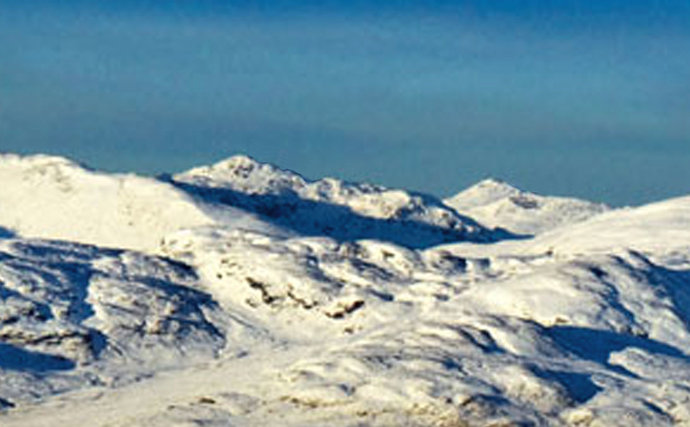 and R of centre Meall an-t-Seallaidh, with Vorlich and Stuc a Chroin further R

The Crianlarich hills: Ben More and Stobinian stand out (centre), then Cruach Ardrain with Beinn Tulaichean in front and the Glen Falloch three on the L Zoomed view of the Crianlarich hills: Beinn Challum peeping up at the back between Cruach Ardrain and Stobinian The head of Loch Katrine

It wasn't until I blew this photo up that I could clearly see Ben Lui and Beinn a Chleibh just L of Ben Chabair in the original photo. L of them are (I assume) Beinn Eunaich and Beinn a Chochuill with Cruachan (unmistakable) at the far L 65km away Looking over Beinn Bhreac to Ben Lomond - just a silhouette now
I had thought about following the high ground South and descending directly to the path, but I decided that descending below "crust" level was more important as it was getting late, so I headed vaguely W along a bit of a path and then down as fast as possible. With gravity on your side this terrain is no problem.
The path-builders were still there - when completed it should rival that up Ben Vrackie - and I pushed on down. In the gloom I missed a L turn in the forest and added in an extra dog-leg but no matter it had been a superb day. This hill is a fabulous viewpoint

Looking back towards the top from just above the Path builders A final look back at the last of the afternoon sun

weaselmaster wrote:I haven't done Ben Venue yet - been uncertain whether to go the way you did or from the south (which makes it easier to also climb the 2 simms to the south of the main summit

Enjoyed that - cracking day for it !

Will refrain from posting embarrassing photos

rockhopper wrote:Enjoyed that - cracking day for it !

Will refrain from posting embarrassing photos

Thanks RH: it's certainly a hill that "punches above its height"

A hill I've read a lot of reports about but never got round to doing but it looks like it's worth jumping in the car for (especially in winter).

I'm always impressed with peeps that can tell which hill they can see in the far distance and point them all out - unless they are really obvious, I fail to recognise them even if I have climbed them.

Gordie12 wrote:A hill I've read a lot of reports about but never got round to doing but it looks like it's worth jumping in the car for (especially in winter).

I'm always impressed with peeps that can tell which hill they can see in the far distance and point them all out - unless they are really obvious, I fail to recognise them even if I have climbed them.

It's all done by smoke and mirrors Gordie

Assuming you can identify some hills you just use a ruler or straight edge on (eg the munro/corbett map) to see what should be L and R of them. I draw the lines on Anquet : it helps to be able to blow up the pics - it's surprising how much more you can see. To be more accurate you can take compass bearings on them as well

I take that back, I'm not impressed at all now