Please, sir, I want some More

Please, sir, I want some More

29 people think this report is great. Register or Login free to be able to rate and comment on reports (as well as access 1:25000 mapping).


I'm a relative newcomer to this hill-walking malarkey.

As a lover of climbing little bits of rock/ice sticking out of mountains, I always thought the best days out involved excessive amounts of kit, tangled ropes, intermittent fear, mindnumbingly slow upwards progress, hot aches, and overly-passionate conversations about knots.

Having moved to Glasgow a few months ago, starting a new life up here away from friends, family, and the sunny crags of the south (?!), getting up into the mountains on my own has been a time of solace and reflection. I have done a bit of mountaineering here in Scotland before (winter), and abroad, as well as hill-walking now and again, but most recently that's been as part of a climbing objective rather than enjoying the mountains and the journey in their own right. I do still climb (can't help it!), but now I've also become somewhat obsessed with my summit maps on Walkhighlands, poring over little red dots and planning walks of my own. All of your trip reports have been so inspiring - my own modest routes paling into insignificance when I read about some of the epics other people have been getting up to!

So, having found myself free on a day of forecast blue-skies and snow, I thought I'd set forth on Unlucky Munro 13. A very small number, barely worth noting. I mention it only because I had such a wonderful day out, I really wanted to share it and all the photos I took.

So here it is! My first ever trip report. Not a big day, but a great day. And that's what matters.


With clear wintry weather set stable over Scotland I'd been planning my Black Friday 13th Munro for a few days, getting inspired by other people's trip reports, poring over maps, and obsessively checking MWIS. In the end, my planned winter ridge walk up Binnean Mor was sabotaged by tiring 13-hr days at work, and a late departure from Glasgow on my day off (08:00 - outrageous!) meant a quick re-think was required. Ben More looked like a good option, especially with the expectation of some good honest hard slogging steep uphill. In the end the late departure was a blessing in disguise, as I drove up past Loch Lomond in a magical misty sunlit world.

Fog clears over Loch Lomond, aka Photography Distraction no.1 More distractions - so much for an early start!

The drive up to Crianlarich was stunning - the fog kept moving and parting and I was getting tantalising glimpses of sunlit summits before the cotton wool closed over again. I almost drove off the road at one point as I was too busy craning my neck around to taking it all in at once! As I approached the start of the walk the thermometer on the car steadily dropped past -5, and I found myself in a magical wonderland of sparking hoarfrost beside the loch. Thoughts of a big hill day were abandoned at this point as I began wandering along the frozen shore photographing for over an hour. Numb fingers and toes finally reminded me that I wanted to see the view from high up as well! I eventually set off around 11:30 (I suppose as a climber I'm used to descending in the dark!) and met a nice chap who was just on his way back. He seemed somewhat surprised and anxious by my late departure, but we had a nice chat about all things mountainous before parting company and I gave a cheery farewell as I began the long slog onto snowy grass straight up from the track. Almost immediately, I fell over. Embarrassing. It turned out the dark wet shine of the bog was in fact thick ice, which was irritatingly slippery. Dusting myself off, I found a weaving line allowing me to continue my slithering way upwards, refusing on principle to put on crampons. Looking back into the sunlight, I could see the looming shadow of Ben More cast across the Glen. Onwards and upwards! Even the shadow looks steep!

Frozen bog and grass gave way to more elegant walking, following a fine crest of snow along a faint ridge-line. The 'path' took an icy/rocky zig-zagging route to the left, but the crisp snow was too inviting and I had a lovely time climbing steeply, feeling the bite of the crampons and enjoying the sun on my face. What a day to be out! I wasn't making as quick progress as I'd expected - partly because I kept taking photos, and partly because long workdays on my feet had left tired legs not helped by a winter pack and 2.5kg camera. The views were incredible though, and it seemed almost a shame to spoil the sculpted snow with my footprints.

The top was reached in a little over 2 hours from the car. What a view! I'm still at that excitable stage of Scottish hill-walking where every summit has me giggling and gasping with delight - I really hope it never goes away! I was greeted with snowy panoramas in every direction, leaving me wishing I had carried bigger maps up to work out what I was seeing. An icy wind came up out of nowhere, but there was a cosy sheltered spot behind the cairn just perfect for a sit-down with a pork pie before exploring the summit snows with my camera. I had planned on including Stob Binnean and doing a more satisfying round, but time was ticking away. I was enjoying photographing the mountains' shadows on the glen and I suddenly noticed that they were quite a bit further up the opposite side from when I'd arrived! I knew from the MWIS/Met Office forecasts that cloud and fog would be slowly approaching from the west, and I could certainly see them coming.... 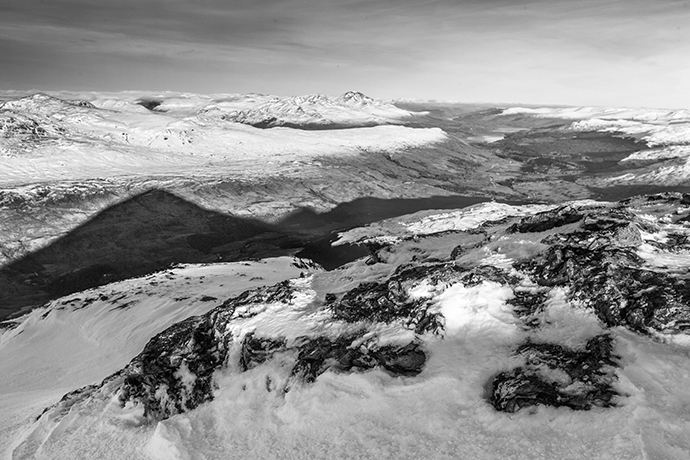 Where has the time gone?! Having completed Beinn Achaladair and Beinn a'Chreachain in the dark the week before (I clearly need to work on my early starts), I decided that with the possibility of poor visibility the more sensible option would be to simply descend the way I had come up. Very unadventurous, but my decision paid off as I was treated to stunning sunset views and an inversion that just tickled the slopes of Ben More. I'd taken a bearing just in case, but in the end I was only very briefly in cloud before it curled and parted around me. 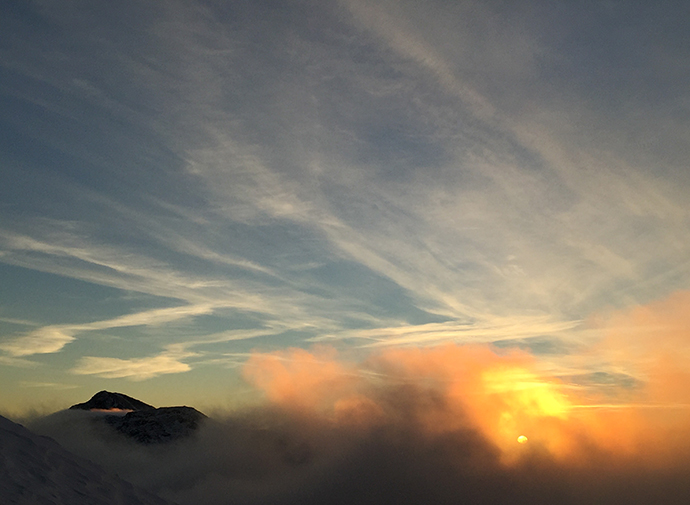 The final walk to the car was accompanied by a soft alpenglow. I'd like to say I'd planned such good timing, but fortune favours the over-sleeper in this case! I slipped and slithered my way back to the track, performing some excellent ice skating manoeuvres, until I was thrilled to find a section of squelchy, melted, mucky bog to sink my boots into.

And it's not often you'll hear a rock climber say that. Thanks Ben More for an excellent Black Friday 13th Munro!

Slingers wrote:Almost immediately, I fell over. Embarrassing. It turned out the dark wet shine of the bog was in fact thick ice, which was irritatingly slippery.

I'm sure we've all done it at some time or other !

I should attempt a walk report myself one day!

What a beautiful day. Really enjoyed your report.

Thanks for sharing - and welcome on board

You've got to be careful with this website, those blue pins on the map have a weird effect, before you know it you'll be celebrating milestones like 50 Munros as if they mean something...

(Not that I speak from experience or anything

The giggles are all part of it, that's the sign that this is for you. Keep on giggling.

Nicely written report and great photos - the b&w ones are a nice touch - you obviously know what you're doing with a camera!

It'd be interesting to hear about some of the climbing you've done.

Brilliant photos. I was sat on top of Ben Chonzie at the same time and watched the sun set behind Ben More. Great to see it from a different perspective...... if only I knew how to resize my photos to upload them.

DaveH82 wrote: if only I knew how to resize my photos to upload them.

There are various image resizers which you can install for free - the link below is to the one I think I installed a while back. Once installed, just select all the photos you want to resize, then right button click, select "Resize pictures", then select what you want - I think this site is max 690 pixels wide (?). You can also create a copy or not depending on what you want. I generally create a copy - that way I can resize again if needed. Alternativey, use an externally hosted site such as flickr and copy/paste the links into the box - cheers

Thanks everyone for such lovely comments! The camera weight was definitely worth it in the end. Looking forward to writing my second walk report, hopefully sometime soon

Thanks Rockhopper, I'll give that a go.

I've been putting Ben More off for about 4 years

Top
29 people think this report is great. Register or Login free to be able to rate and comment on reports (as well as access 1:25000 mapping).