I am not a free man! Any trips to the hills require a pass authorised by my wife. Inbetween my mountain adventures, I work hard to accrue more brownie points while secretly plotting my next foray into the hills.

I have done quite well of late, the Walkhighlands weekend and two weeks later, popping up Ben Wyvis with my son and Mountainlove. My brownie point piggy bank was pretty much empty! I know this looks nothing like me - the hair is in the wrong places!

However with a such a good forecast, perhaps she would take an IOU. I spent a couple of days waiting for some sign of a good mood so I could make my move, but she seemed about as cheerful as Nora Batty. Perhaps not a good time to ask!

I even thought of mentioning my plans to my son,knowing that anything I say gets passed on to his Mum - A cowardly approach, I know. I guess I am not much of a Mann!

It reached a time, when if I didn't ask, it would be too late. Besides, taking her to the supermarket seemed a good time to ask! I could always slip a few nice extras into the shopping trolley. She replied with a grunt. I could not quite discern the word "no", so on our return home I began to sort out my kit for a two-day/one night trip. The Smuggler's Hostel in Tomintoul was "Not Available" so I booked myself a bed at Aviemore YH.

My walk report for Saturday's ascent of Geal Charn (http://www.walkhighlands.co.uk/Forum/viewtopic.php?f=9&t=68653) was published a few days ago. Brown Cow Hill is the bigger of the two days, so as I would be driving from Aviemore rather than Dornoch, I saved it for the Sunday.

In terms of Corbett names, Brown Cow Hill must be the mose uninspiring. Furthermore, it lacked appeal when viewed from Carn Ealisaid last April, so I approached this hill with very low expectations. I was here simply to tick off another Corbett.

However, there was enough to hold my interest throughout the day and with pleasant conditions underfoot, made for a great half running, half walking, short day on the hill. As is often the case, A simple up and down bagging route would result in missing the finer aspects of this range of hills.

The interest begins with Corgarff Castle. I'm not sure if it is possible to head up tothe castle and then cut across to the track out from Cockbridge Farm. It would probably involve climbing over at least one fence, so I headed back to the A939 before turning right through the farm buildings and following the track up the side of the Cock Burn. This gives a view of the castle from the other side. After a while, there is a ford across the burn. At the level shown here, crossing in boots and gaiters would not be a problem, but I was in fell shoes and leapt across just upstream from the ford. Looking back, I could see Carn Ealisaid and other hills bathed in sunshine but to the south, there was a lot of cloud. The forecast was for it to clear southwards "possibly as far as Tyneside", so I was still hoping for a sunny summit. 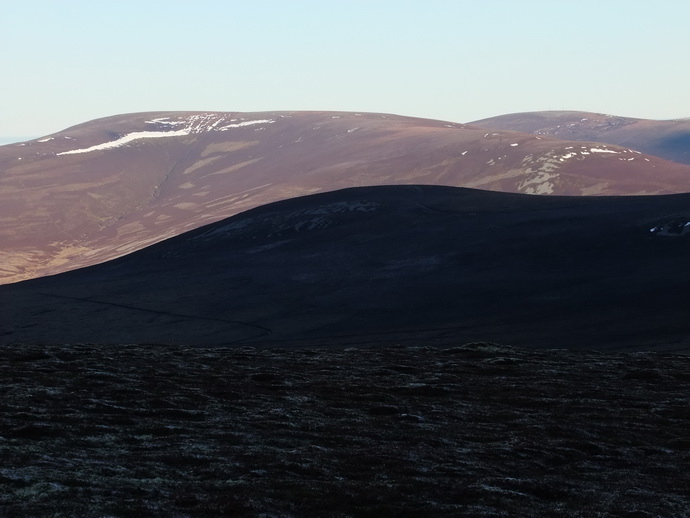 There was a clear path for most of the way, though it disappeared when crossing a bit of peat hag. Reaching the top of a hill often reveals a new view; it is one of the delights of reaching the top, but not on this occasion. The top was clear of cloud but not the hills to the south. The wind was not not strong but it was quite an icy breeze, so after a few photos, I moved on with a view to consuming my soup somewhere offering more shelter from the wind. Looking across to Ben Avon: The sun was clearly breaking through the cloud, which was slowly clearing. The views were to improve as I headed towards the smaller but far finer top of Meikle Geal Charn. Following an electric fence towards Little Geal Charn, I came across another walker, Rob, who was kind enough to take my photo. I didn't ask him where he was heading for. I had wrongfully assumed that he was doing pretty much the same as me but in reverse. However, looking back later, I could see Rob following the fence, heading down towards Lochbuilg Lodge. I am not sure that an electric fence is necessary somewhere ike this. Most estates seem to get by without them! I do wonder how many winters it will last. Once the ice builds up and then subjected to strong winds, I would foresee breakages. I did get my feet cuaght up in a couple of pieces of old rust wire from an older fence, but it is clear that the estate has tried to clear most of the old fence off the hill. There are crossing places at about 1km intervals. On the fence post next to the Fence Crossing Point sign was the remains of a bird, presumably, the leftovers from a bird of prey's meal. The head seemed disproportionately large for a grouse and I still am not at all sure what it is. As is evident in the photographs, it was turning into a glorious afternoon and I had no need to rush as I was on schedule to reach the car well before dark. While I was moving fairly quickly, I stopped for a lot of photo stops - here, Ben Avon left with my previous day's hill, Geal Charn (Abernethy) right of centre. 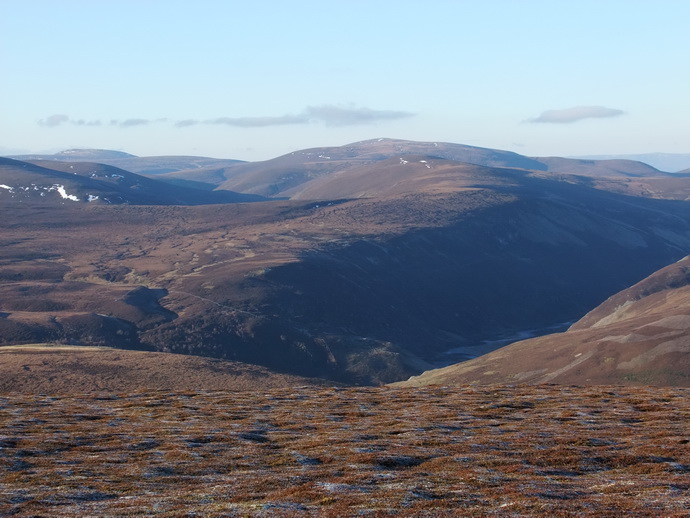 I picked up a bit of a track taking me down to Inchmore, a fine looking bothy which is sadly locked, but that did not stop me having a bit of a peak through the window. There were soft furnishings and a cooker. The building has been well maintained, but seems a bit superfluous to the needs of the estate, when there is a lodge 500m down the glen. . . . . A short way further on, I finally stopped for soup followed by iced fruit cake, before the easy run back to the Corgarff Castle car park. I was determined to wring the very last drop out of each Brownie point and stopped at the side of the Lecht Road for one last look back:

I can't write anymore right now; my wife is waiting for me to take her to Inverness for some shopping. Hopefully no shoe shops - but then again, they're worth extra brownie points!

One of those less popular hills, but get it on the right day as you did and it rewards you well

Did it a couple of winters ago, so avoided the worst of the peat hag and bog. Like you I enjoyed good su, but my views were hampered by cloud on the surrounding hills.

PeteR wrote:One of those less popular hills, but get it on the right day as you did and it rewards you well

People tend to climb what they consider to be dull hills on dull days, which only acts to confirm their preconceived ideas. There is often much to explore, even on less distinguished hills!

That looks a nice day. Hills like that are always worth doing as a change to the more celebrated ones. I've yet to drive over the Lecht; it must be the highest public road in Britain I haven't been on.

This hill gets a bad press but do it on a good day and it's well worth it, in fact it's probably one of the better ones for those just getting into winter hillwalking (The hags are frozen