A Magical Day on the Hill of the Fairies

A Magical Day on the Hill of the Fairies


Close to Invergarry, where our club, the Argyll Mountaineering Club, holds its annual Christmas meet, the fine hill Ben Tee, has often been targeted to climb, however, with the weekend traditionally the first weekend in December foul weather has often resulted in failures to reach its cairned summit. Prominent above Loch Lochy and well seen reflected in the dark waters of Loch Garry, on journeys to other club meets, its presence was a constant reminder of our many failures and increased our determination to finally reach its top. This year, a cold spell in November, happily continued longer than anticipated and finally it looked good for climbing Ben Tee.

Travelling up on the Thursday night the Rodmeister and I were confident of reaching the top on the Friday before the other club members began to arrive. After breakfast on Friday morning we left Saddle Mountain Hostel at Invergarry and drove the short distance to Kilfinnan, south west of Laggan Locks, and readied ourselves for the climb. Leaving the car, we immediately began to climb steeply up slopes east of the burn and gained height quickly. 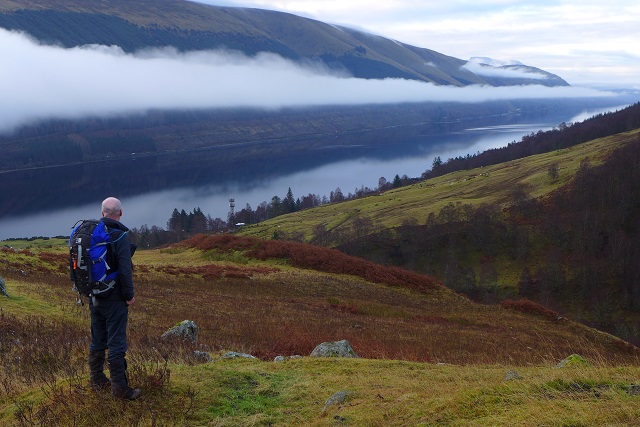 Rod above the Great Glen

Looking down to Loch Lochy and Loch Oich it was evident much of the land surrounding Invergarry was ideal as pasture for livestock and for growing crops and the area has been controlled by the powerful and prominent family of the MacDonalds, the MacDonald’s of Glengarry. Their seat, Invergarry Castle, lies in ruin since it was destroyed by Cumberland’s troops after the failure of the ’45 rebellion. The “Well of the Seven Heads” memorial on Loch Oich side, close to the start of the climb, is another reminder of the areas rich Clan history. The story, exemplifies the dark days of Clan struggles and treachery but, perhaps more importantly, highlights the change in Scottish Society in the 17th century which resulted in Clan chiefs becoming increasingly remote from their clansmen, increased the influence of Government in the lives of the Clans and eroded the independence and power of the Clans Chiefs. At a party to celebrate the investiture of Alexander, 13th Clan Chief of the Clan Ronald of Keppoch, his uncle, Alexander Buidhe, manufactured a fight in which Alexander and his brother Ranald were killed by a group, including an ally of Alexander Bhuidhe, Sioll Dughaill. Wise to the treachery, a Keppoch MacDonald, Iain Lom, sought the help of Glengarry to revenge the murder but was refused. Iain Lom eventually gained an ally in another MacDonald family, MacDonald of Sleat, however, in this new era of Government influence James of Sleat only agreed to help after presenting the case to the Privy Council in Edinburgh and being granted a commission to execute the perpetrators of the crime. Soon after, the assassins were located at Inverlair and following a short battle Sioll Dughaill and six of the group were killed and beheaded. Passing Loch Oich, on route to Sleat, Iain Lom stopped at a well and as a symbolic act to rebuke Glengarry for his failure to help washed the blood from the seven heads. 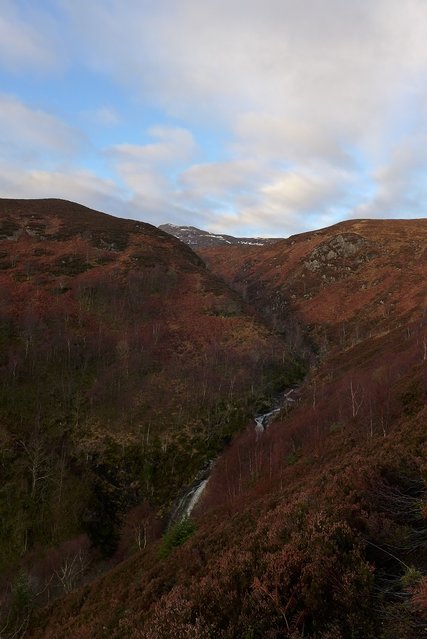 Higher up, beyond the narrow gash through which the Kilfinnan Burn flows, we picked out the east ridge of Ben Tee sloping away from the summit, visible below the blue wintry sky. We had picked a line to close to the burn and consequently had to contour the steep slopes to reach the ridge. It was hot work and tiring negotiating the knee-high heather and we continually slipped on the wet heather stems which sloped awkwardly to the burn below us on our left. Thankfully we walked beyond the upper reaches of the Kilfinnan Burn onto easier ground. Our efforts were rewarded with views opening out to Ben Tee and further left, to the dark, shapely slopes of the Munro, Sron a' Choire Ghairbh, separated by the trench of the Allt a’ Choire Ghlaisle. 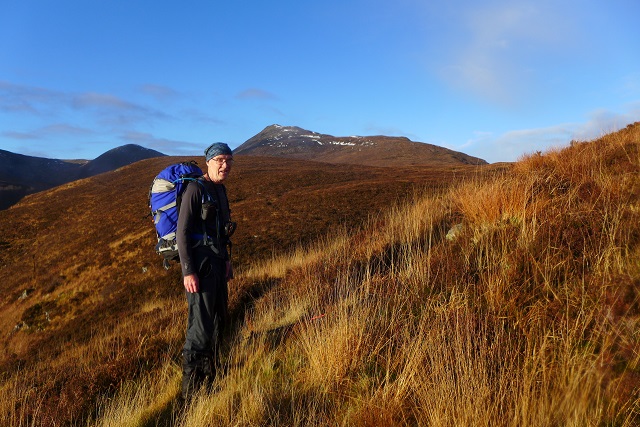 Thankfully we eventually climbed beyond the difficult slopes and reached the wide east ridge with our view of Ben Tee continuing to open out. 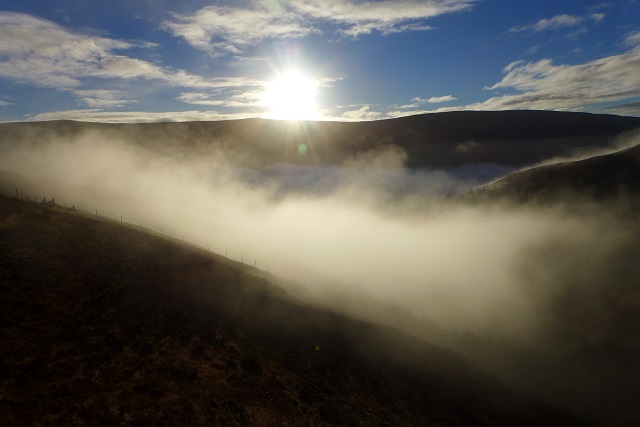 Looking west, the weak winter sun barely rose above the dark slopes rising west of Glen Roy, a reminder of how close we were to the winter solstice and the year’s shortest day. Below us, to our left, the wide expanse of the Great Glen was almost completely concealed under a layer of cloud, stretching north to engulf the southern waters of Loch Ness, formed by cold air which lay low in the sun starved glen. 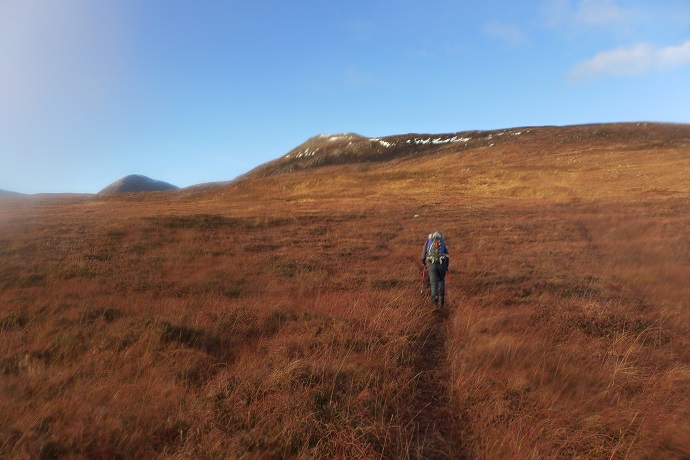 Rod on the east ridge of Ben Tee

The wide east ridge was boggy in places but a good path rising gently up the ridge towards the summit made the going easy. 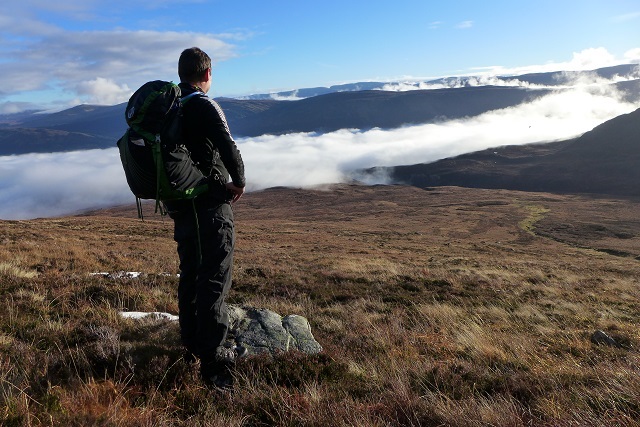 Marin looking back down the east ridge

Enjoying the walk on the ridge we stopped often to look back and watch the cloud creep from the glens higher up the hillside. 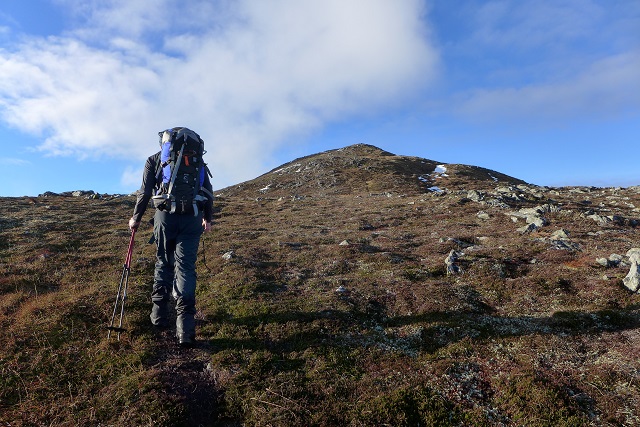 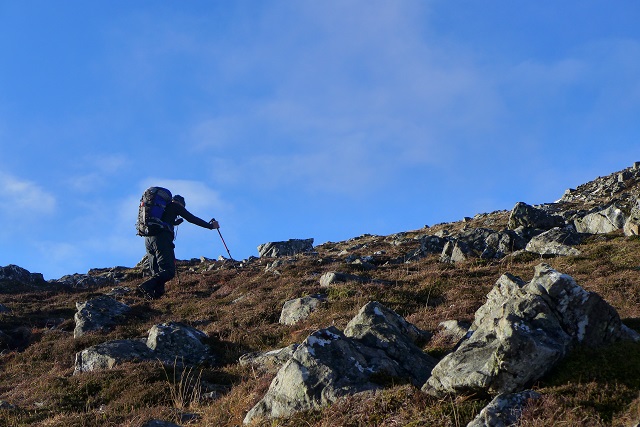 Higher up, the slopes began to steepen and became rockier and we continued to walk up the hillside in the clear cool air, towards the summit dome, sharp below a deep blue sky. 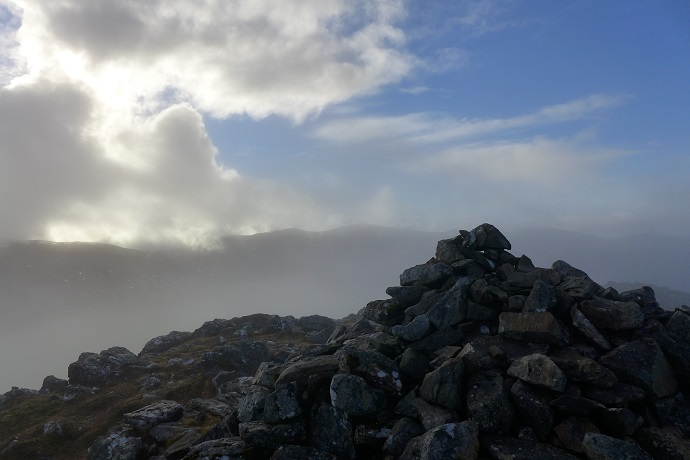 We reached the small stone cairn which marks the summit, at 901 metres a Corbett, but in no way inferior to its higher neighbours Sron a’ Choire Ghairbh and Meall na Teanga. On recent walks, we have rarely lingered on hill tops, often, due to rain or wind or no view and often all of them simultaneously. Normally, after the obligatory race to reach the summit we would stop only long enough for a summit photo and if conditions allowed to take on food and drink essential to continue the journey. 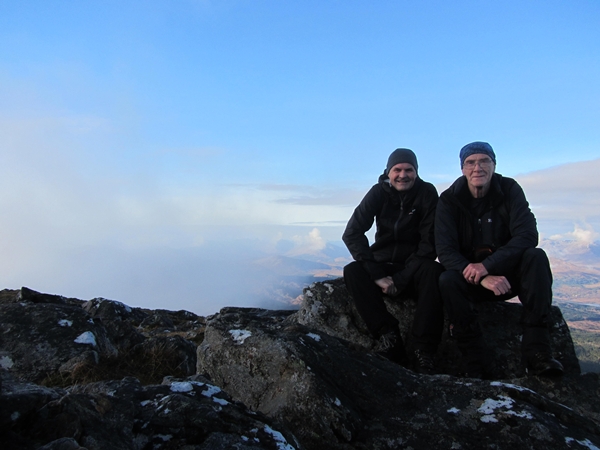 Rod and Martin at summit

This early December day was special; it appeared that the fairies which give the hill its name “The Fairy Hillock” were weaving their spells and Rod and I, our old minds giddy with the views, looked west, not, it seemed, to Knoydart but to some prehistoric land of volcanoes. 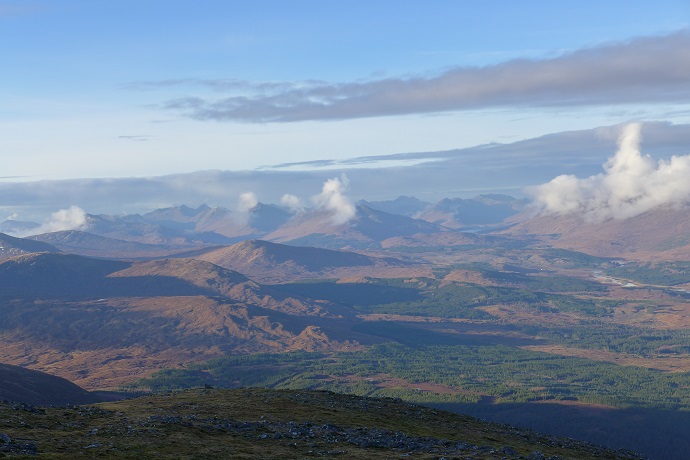 It was too good a day to rush away and so we sat at the cairn in the still, clear chilly air each enjoying our view of this wonderful world and hearing the rarely heard silence. Down below foaming cloud, sat on the still waters of Loch Garry and beyond its northern shore lay tangled among the branches of trees rising from the Loch to the slopes of the Corbett, Meall Dubh. 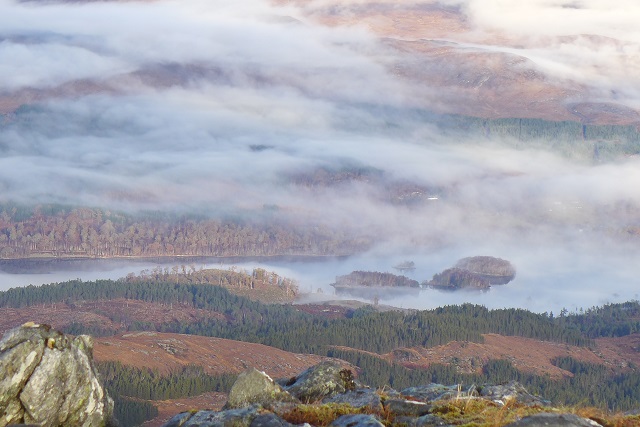 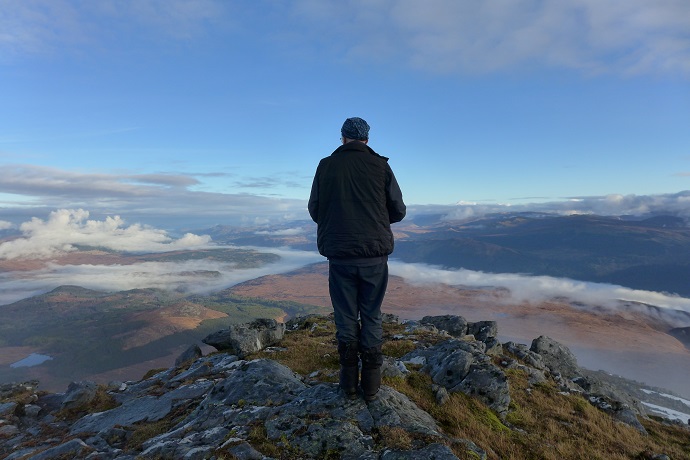 Rod looking east from the summit 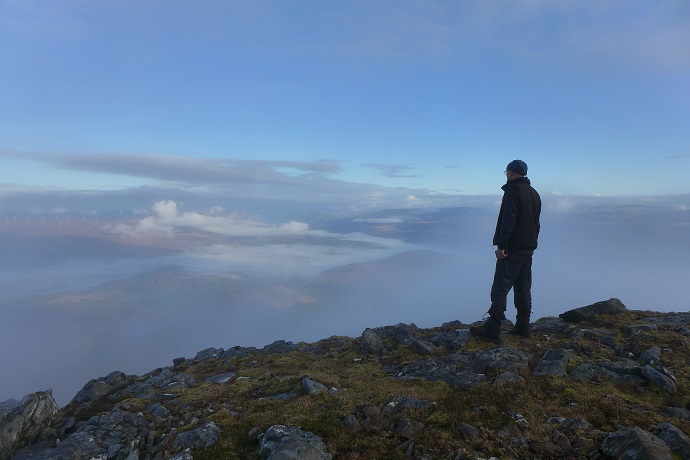 After a leisurely lunch and a drink of hot coffee we enjoyed a last lingering look from the summit before beginning our descent. As we descended, we passed the last remaining patches of this winter’s seasons first fall of snow. It was now mid-afternoon and the sun was barely visible above Sron a Choire Ghairbh. The inevitable colder air was forming thin cloud which enveloped the upper slopes of Ben Tee. Lower down the ridge, looking north east beyond Glen Garry, the Millenium Wind Farm, highest windfarm in Scotland, stood out starkly against the russet slopes. Today, in the windless conditions, the blades of the 26 turbines, which cover a vast swathe of moorland east of Corbett Meall Dubh, which we had climbed on a miserable day in July, were listless and, consequently, useless. Even this view could not ruin this magical day on Ben Tee.
We continued down the ridge skirting east of Lochan Diota, reflecting the blue sky, to reach the steeper slopes beyond the Kilfinnan Burn which would return us to the car. Soon we were above Kilfinnan, concealed in a sea of cloud which extended west to the coast past a quite amazing cloud shaped like an anvil. Below us, even a mobile phone mast, the most modern of contraptions, looked unearthly and quite eerie, partly hidden in the atmospheric cloud. And the day ended with us leaving the cool clear air and dropping into the gloom of the Great Glen delighted to have enjoyed such a magical day finally climbing Ben Tee.

Re: A Magical Day on the Hill of the Fairies

Superb stuff Martin. We were due a good weather hill day though, but stunning summit views and great photographs

Re: A Magical Day on the Hill of the Fairies

The Rodmiester wrote:Superb stuff Martin. We were due a good weather hill day though, but stunning summit views and great photographs

Thanks Rod. A great day for a great wee hill

Users browsing this forum: No registered users and 204 guests