My office had decided to have our office party in Pitlochry this year. It would, in my opinion, been rude to have visited this lovely Perthshire town with out a wee wander up Ben Vrackie.

I arrived at the car park around 8:45am and there were only 2 other cars there. There was a bit of cloud about but it was quite high and wonderful shafts of sunlight were breaking through bathing the Glen below and the Tummel and Tay in a warm glow.

I just followed the tourist track, which was pleasant enough until I got across the dam wall at Loch a Choice. The path from there to the top is primarily made from stone steps. I get the point of the steps - they greatly help reduce erosion - but the balance between the rise and the step made it impossible to get any rhythm to my stride. I'm obviously not the only person who has found this to be the case as snaking beside the the stone path there is a "normal" track in the heather.

It was fairly windy at the top and there were wonderful views north, south and west. The hills to the east here, however, shrouded in dark grey cloud. From the summit of Ben Vrackie I headed over to Cain Geal before heading back to track and heading down the hill. On the way down I started to pass ones and twos heading up the hill and by the time I had reached the wood the groups heading up the hill were getting larger and larger. The car park was now full and as I pulled out in my car to meet my colleagues in the town there must have been a group 20+ just heading off. 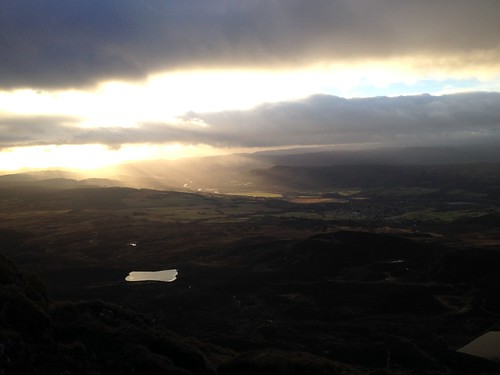 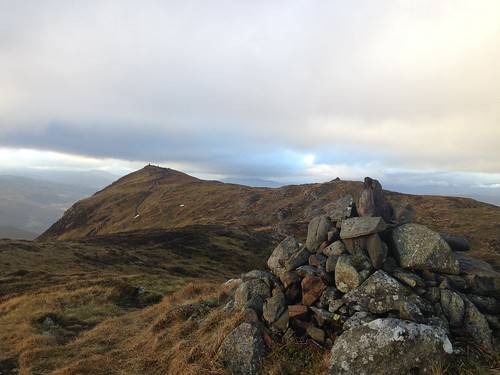 Looking from Carn Geal back to Ben Vrackie 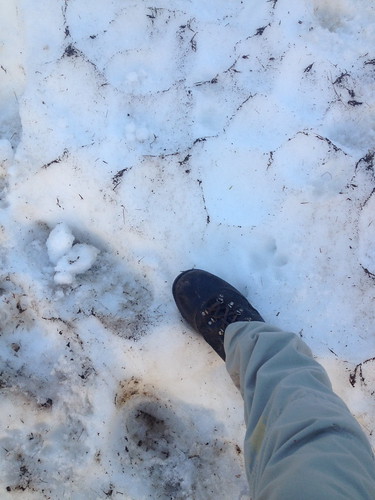 A small patch of snow lay across the path near the top.