Burning up the Burma Road

Burning up the Burma Road


For a December Sunday I was looking for a straightforward hill, nothing too strenuous, and since the forecast for Strathspey seemed promising, I flipped a coin between Geal-charn Mor and Carn an Fhreiceadain. Thankfully I chose the former, and had a lovely bright walk up, while the latter stayed hidden under cloud just a few miles away.

I decided to follow the WH route there and back, so left the car on the old A9 at the bridge at Lynwilg, with a few other walkers' cars already there. I was on my way by 10.30, and headed along the tarmac road to Allt na Criche, before slanting uphill onto the Burma Road. One of the houses there has an honesty box and a load of rocky road bars and other very tasty looking traybakes—I'd never seen that on a hill route before, but thought it was a wonderful idea. Of course, I walked by, thinking "I'll get one on my way down", completely forgetting my route back wouldn't come this way… Oblivious to my missed opportunity, I made fast progress up the Burma road, which clearly is still well-used by 4WD vehicles as it's in excellent nick. Is this the way to Mandalay?

I made it to the high point of the track at 690m in about an hour, and the way forward to Geal-charn Mor's summit was a clear, if initially boggy path. Another 15 minutes, including crossing a fence by a stile beside a curiously substantial gate, and I was at the top. 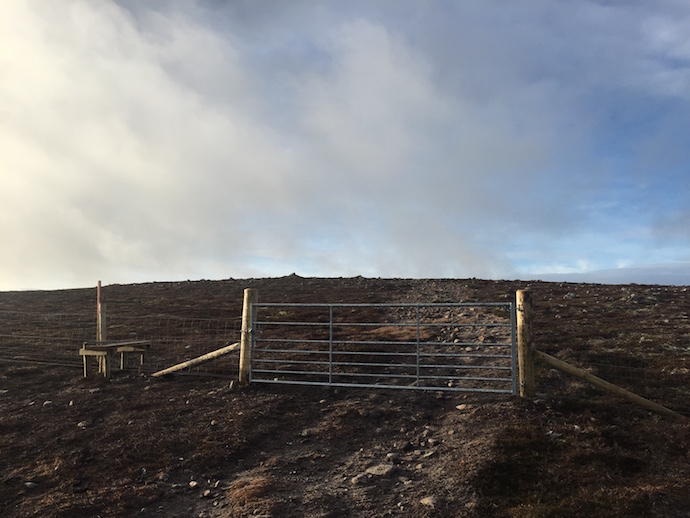 The Cairngorms were shrouded in cloud, but the view north to the lonely Monadhliath was captivating, and a real contrast to the green fields and trees of Strathspey in the opposite direction. NW from the summit to the Monadhliath hinterland E from the summit towards Aviemore

The summit trig has a handy stone shelter that initially did a good job of fending off the effects of the chilly breeze, but after 10 minutes eating lunch and gazing at the views it was time to head back. I retraced my steps to the Burma Road, and immediately turned right following the less well established path SSE towards Ballinluig, Someone had been along here on a bike, judging by the tyre tracks, but I guess had given up, because this path's mix of stones and bog really doesn't look like my idea of fun for cycling. Looking back to the Burma Road from the Ballinluig path

As the path descended more steeply, the view across Loch Alvie towards Ord Ban opened up. Since I was way ahead of schedule, and the weather was holding, the idea of an afternoon walk began to grow in appeal Loch Alvie and Ord Ban, and an idea for the afternoon…

After skirting round to the W of Ballinluig farm, I picked up the tarmac track that heads E parallel with the A9. It changes surface as it passes a wood that was teeming with pheasant, but gives fast walking back to Lynwilg. A really pleasant walk, and with another 3 hours of daylight I needed another fix—so it was on to Loch an Eilean and another hill via Aviemore…

I don't remember that gate being there. I guess it must be pretty new.

Fancy getting back up here when the snow returns and need to remember to take some cash for the tray bakes!

A good hill esp if you don't have too much time - cycled to the top one summer's evening a few years back. Last bit was a little rougher but great on the descent. Also don't remember the gate so presumably quite new - cheers

rockhopper wrote:A good hill esp if you don't have too much time - cycled to the top one summer's evening a few years back. Last bit was a little rougher but great on the descent. Also don't remember the gate so presumably quite new - cheers

I couldn't see why there was a need for such a wide gate when there were no obvious vehicle tracks there. Unless it's in preparation for something…industrial

It looks very different to a year ago (minus 1 day). To me it looks like vehicles of some description are taken through the gate, judging by the amount of erosion. I assume that the fence is to divide sheep from grouse as they have different effect on the vegetation and are best managed separately. The fence in question would perhaps stop most sheep from reaching the Corbett but for flighted grouse so chance.