With Annual Leave required to be used by the end of the year I found myself off for a week before the kids holidays! Mountains I thought, the long range forecasts had predicted a likelihood of high pressure on the build up to Christmas – excellent – or so I thought. With this being Scotland the models soon changed and the predicted high pressure was now due to move away from Tuesday introducing some spicy low pressure systems to rattle Scotland and the North West! Plans changed, up until Tuesday the forecast was ok – quite benign weather albeit mild and a little muggy….
The chance of cloud free Munros was around 20% with summit winds of around 20-30mph- time to bag some Corbetts…

A few years prior I had headed to the three Munros to the north of Glen Dessary with a summit camp on Garbh Chioch Mor, my only previous visit along Loch Arkaig. I had looked at the Corbetts here a few times but never ended up hiking in the location. With the winds a little high on the tops I decided I would look at a road/loch side camp and use this as a base for a couple of days hiking.
05.30am and I was up – the alarm wasn’t set until 06.50 but as is often the case I woke and thought I’d get going. The route I had planned would mean a possible decent in darkness so I was glad of the earlier start! 2.5 hrs later and I was happy to see my researched camp spot had no campers – maybe not a surprise given it’s the middle of December! I parked up and stuck the tent up and was away by 09.45am. After the warmth of the car I was taking my time up the hill. The forecast suggested the clag may move later in the day and so I headed straight from the camp site up the southern slopes of Mhurlagain. I soon hit the clag and got progressively damper in the fine Scottish mizzle! Once on the ridge the walking was relatively easy going albeit a little squidgy.

1 hour and 45 minutes later I was on the summit looking at the grey inside view of a cloud. The only wind was really on the summit but I didn’t hang around as I was aware the sunset was about 15.30. Compass out and I was off descending towards the bealach between the two hills. It didn’t take long to reach it and my expected views never materialised, the clag had dropped and the little rain continued. Up to Fraoch Bheinn and the microspikes came on and steep ground crossed as I made a bee line for the summit not wanting to waste time. I sat on the summit and I could have been on Mhurlagain again, the views identical- The Grey! Off again and I decided my ascent route was a little too steep for a descent so I headed down the southern ridge a distance before tracking south east towards the lochside camp.

At around 350metres the views returned as I ducked under the cloud, always a nice feeling- the light rain wasn’t however!
With microspikes doing their job perfectly I was back at camp for around 14.30.
Although wild camping is usually the preference, this road side camping has its advantages. 10 minutes after arriving I was out of my damp (read soaked to the skin) clothes and warming nicely in the car. The hassle of inflating the ground mat was a joy in comparison to summit camps and tea and coffee were made in a leisurely manner!
A few hours were spent in the warmth of the car reading maps and routes for tomorrows adventure – a hike up The Corbett Sgurr Cos na Breacgd-laoidh. Hopefully the weather gods smile and I get some views tomorrow… 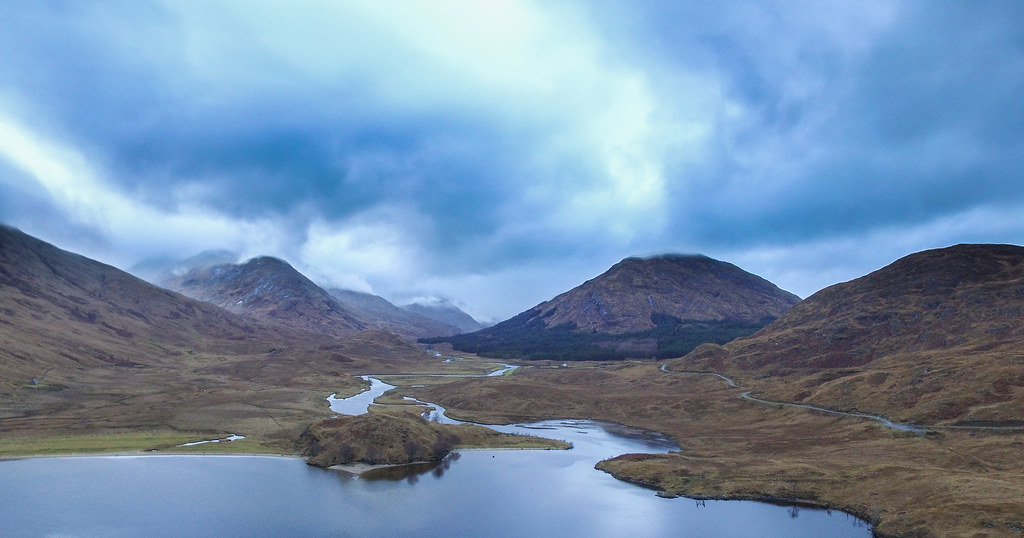 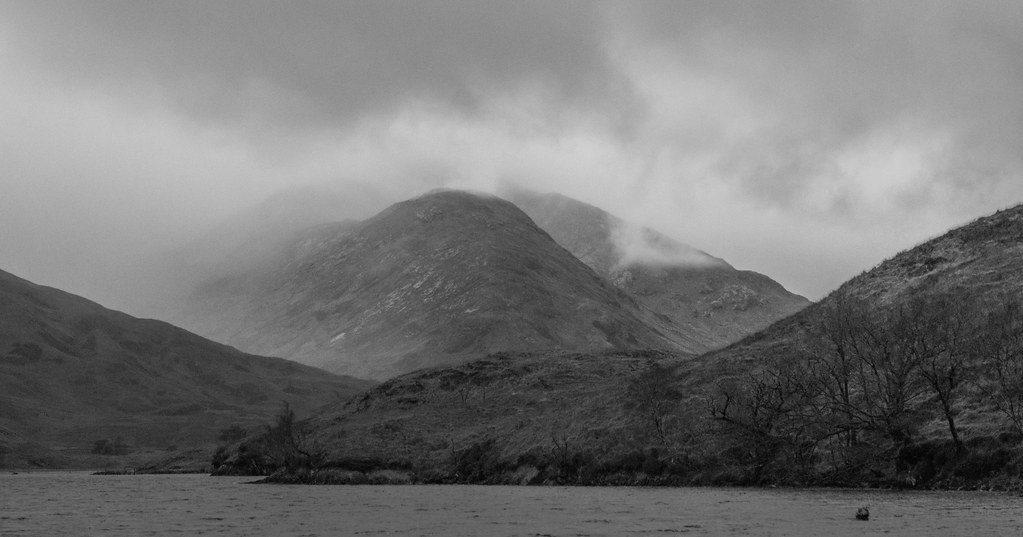 Pity the weather wasn't so great much of the time but good to get out and at least you got some better conditions later on both days. Have yet to get to these hills - still thinking about possible options - cheers

Aye, it's a nice camp spot that, used it a couple of times. Actually quite refreshing to see you get "real weather" on one of your outings as opposed to the beautiful conditions that you usually seem to get lucky with

Enjoyed the drone shots over the Loch

rockhopper wrote:Pity the weather wasn't so great much of the time but good to get out and at least you got some better conditions later on both days. Have yet to get to these hills - still thinking about possible options - cheers

weaselmaster wrote:Aye, it's a nice camp spot that, used it a couple of times. Actually quite refreshing to see you get "real weather" on one of your outings as opposed to the beautiful conditions that you usually seem to get lucky with

Enjoyed the drone shots over the Loch

Usually I don't get the camera out in the damp conditions but thought Id try on this trip. First day and my Sony was near;ly knackered due to the damp - lesson learned ! however THE WEE WATERPOOF CASING ON HE gOpRO 3 did most of the filming on the second day.... Hoping the sony drys out ok