ZzzzZzzz. Sorry folks fell asleep at the keyboard. Now with the letters firmly imprinted on my forehead I think I can conjure up a few words to describe my walk on Thursday (26th).

After I dropped of my wife at work I then set off for Arrochar keeping my fingers crossed that the weather would prove true to the MWIS forecast. As I reached the A82 and looking across at Ben Lomond I had Lou Reeds ‘Oh what a perfect day’ running inside my head. What a day indeed, a cracker.

Arrived at carpark and paid the machine £2 and still no ticket (no refund either), had to dash round to the petrol station to break a fiver then back to car park which eventually on 3rd time of asking, accepted my £1. Into kit and set off from car park at 10.30am.

Of course my walks aren’t straight forward a thus I missed the immediate turn off through the undergrowth. Funnily enough, it didn’t matter as the weather was spot on and complimented the views all around. The view along the Loch Long was mirror like, reflecting the pier, houses and hills beyond with the exception of a small boat breaking the water. Up onto the main path and remembered to turn right so I could catch up with the route of the day (courtesy of www.walkhighlands.co.uk).


Doesn’t look like much but once through a few metres the area opens up along with the features advised to look out for. Upwards and onwards till finally reaching where the path traversed left & right. The instructions were pretty straight forward but I somehow strayed and instead of aiming to the right of the Buttress I kept traversing round until the Cobbler came into view. Although I knew I was off I was beginning to feel a bit dejected with my school boy error. Taking stock I had come far enough round that I decided to cut my losses and head up hill. UP UP UP and UP. Really began to feel the lack of hill conditioning and my fitness generally. Rucksack feeling heavy to. Looking down at the boulders and seeing folk on the path I wondered if the best thing to do was cut my losses and head towards it and work my from there. No chance. I eventually came to the bealach separating Narnain from Cruach Nam Miseag I could have given in at that point, sweat lashing off me, HR through the roof and still Lou Reed sang to me.

I had many good reasons to be here today so quitting had to be capped and put to bed. This lapse cost me in time and progress where I did eventually get onto the hill I found the main path again. Halleluja. Time for an energy bar and a little drink. The heat was amazing and the warmth was good enough to be felt coming from the ground itself. Back on track I enjoyed the wee scramble as it helped me focus again and from there it was up to the summit. Looking over at the Cobbler its features were amazing in the sunlight. The eye was very visible and reminded my of the ‘Gateway to India’ just passed Evanton over the Kessock Bridge in Inverness. Not sure if the detail is sufficient in my pics.

Just as an aside, 11 folk including myself set of from the car park so it looked like a busy day ahead. No one came my way though!!!!

Further on I finally reached the summit with some stunning views and crystal clear vision. Not a breathe of air up here (unusual?) completely still and tranquil.
One of the views from the summit of Narnain. I was knackered at this juncture and quickly came to the conclusion that my walk would have to entail only Ben Narnain & Ben Ime. The fitness wasn’t there and on the flip side a sharp reminder to bite off only what I can chew.


Still, the task at hand was to soak up the day and marvel at how small Scotland is yet how convoluted the route system is to get from A to B. One BIG plus for me on reaching the summit, can you guess?, Not a soul there except for me. I had the hill all to myself as everyone else headed over to the Cobbler. From my vantage point I could see that there were quite a few more folk up there to. Ahhhhhh, there is a God after all.


Next hill in view (Ben Ime) and hoping for a slightly easier ascent to the one I just gave myself I set off refreshed and in a better frame of mind. On the walk down I started to feel the rubber leg syndrome and knew then that Beinn Chorranach and Ben Vane were a no-no. An enjoyable descent nevertheless as it wasn’t too rocky and was slightly kinder on the feet. Over the fence I go and onto Ben Ime, looking over to the Ben Ime valley and to the side of Ben Vane I had anticipated coming down I reminded myself not to trust google earth ever ever again. The valley was deep and the descent sharp….. definitely not for me, unless I had an extra day tucked away in my pack.
From the summit probably my favoutrite pic of the day just for its sense of scale and another pic looking back towards Inverkip power station


I live just a few miles from here so to see a reverse view of the hills I look at was pretty cool.

Again, when on the summit there was only myself for company and the odd crow. What struck me was not only the lack of wind, but, no flies, clegs or midge AWESOME…… I was ready for them anyway with my repellent and flame thrower. The only downside albeit a small one, was the thrum of traffic coming up from the road below but that was countered with a short walk away from that side.

Looking on a 360dg view I managed to use the video function on my cam but so far failed to upload it. I will try again and hope for the best. The trek down from Ime was much much easier than I could have wished for as I was beginning to feel the days walking in my feet and legs. 41mins from summit to style, not bad. The walk from here to the car park was another 1hr20min. All in all, 7hr 9mins 54secs (including stops, detours & sightseeing).

Once back and with boots & socks off it was pleasant to feel the coolness of the tarmac on the soles my feet. By the way…. Lou Reed was still singing ‘Oh what a perfect Day’

Cracker of a day in the end and the weather made such a difference, so much more I could write but I’d bore the pants of you. 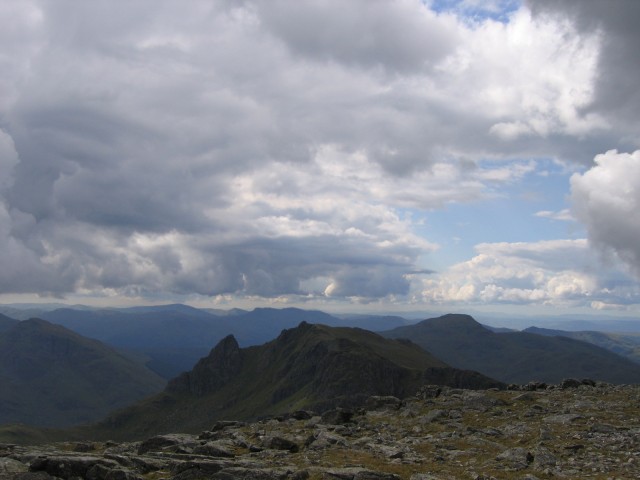 Grand view of the Cobbler PPS. Kind of made a mess with the sequence of pics....apologies for this. Nice report Mark
Brings back memories of the same route (without the detours ) me and my son did a month ago. Very much the same weather and again - busy in the car park but nearly everyone went to the Cobbler. We only met 6 people and a dog all day!
Just a shame it will be a few months before I get back up to Scotland!
Stephen

Yup, everyone heads for the Cobbler mostly but Ben Narnain in particular, is a fine hill

Don't think the ticket machines at both car parks are well maintained, last couple of times I was there (which was a while ago granted) they were not accepting money at all.

Defo wouldn't pay twice at a parking machine! I'd have put a note inside my windscreen or something...

You missed one important point in your report... did your wife have a perfect day at workies!

Bloody ticket machine at Arrochar! Parked there this morning and found it gubbed. Left note on windscreen but still returned to car to find ticket slapped on it

!!!! Totally ruined an otherwise perfect day up the hills. Thanks Argyll & Bute Council - did u honestly think I couldn't muster the whole £1 to pay for the day?!!!

Calmin down and movin on, I did this a wee bit backward (story of my life) and went up through the glen between Cobbler and Narnain heading straight for Ime then back down and up Narnain to finish. Maybe cos I'm getting a bit fitter or cos it was perfect weather but I've not enjoyed a climb like this for some time. And the Cobbler looked brilliant from every angle - no wonder people get hooked on the hills once they've been up it.

Thanks for the comments folks. I think there might be a bit of form appearing here with regard to the ticket machine. I'll post in the misc section and ask how many folk have had problems with this machine (is it the only one in the carpark?) recently or historically, have been issued tickets and any successful appeals etc. Perhaps something A&B council should or needs to address.