Out in the hills again!

Out in the hills again!


Out in the hills again and how I had missed them!
Leaving our wee six month old at home for the first time with trusty grandma as babysitter, we set out to feel the wind in our hair......as far from home as we dared. Grandad wisely jumped at the chance to join us over babysitting

We had an even earlier rise than normal

and I drifted in and out of a sleep in the back seat as my dad drove us through the dark countryside to the start of the walk.
I was woken with a start as we pulled into the carpark, the outlines of the hills and trees visible with the dawn light and a bright moon overhead. The temperature was unseasonably mild which helped with the feelings of wanting to crawl back into bed. A fleeting feeling of madness passed over me that I had choosen to get up so early on my first day of freedom. Leaving in the dark

With the daylight gathering fast we crossed through the farm and could now see the lower slopes ahead of us. We stopped to discuss our route up and decided to go left of the small craggs half way up, as seen below. The steep slope up the first Munro

It was a bit of a slog up (feeling VERY unfit

) but easy going and not as steep as it had looked from below. View back down the glen

Nice views down the glen and it seemed like we were going to be lucky with the weather too, could have quite easily been a day in July! A view up the slope towards the crags above. We spotted a small alluvial fan among the rocky skyline and decided to head for it in order to pass through the crags. This turned out to be a nice easy way up, seen just left of middle in photo below. 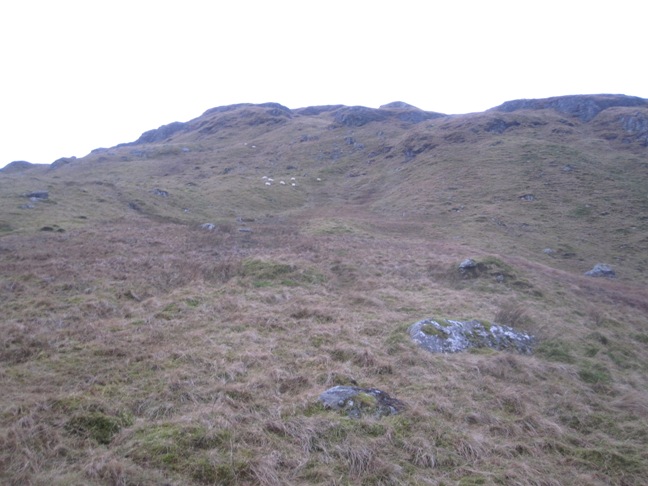 The route through the upper rock band and the alluvial fan. Over the crags the slopes we continued more gently, passing over a style and continued up the ridge. Here we found lots of rocky outcrops which made for a lovely walk. The ridge leveling out and entering the cloud We made it to the summit of Beinn Tulaichean suprisingly quickly, my first of 2016 and made all better for the wait! After a short stop on the summit & some of Dad's dark rum from the hip flask we pressed on down the ridge towards the bealach, an obvious and easy path to lead the way. We were up against some strong cross winds and gusts but nothing too hairy and the forecast was for them to ease as the day went on. Onward route into the cloud from the bealach Dad racing off into the distance, secretly pleased to be the fittest by far of the party Dad at the summit. No views unfortunately.

Wind blasted picture of a pleased Dad and I having reached the summit of Cruach Ardrain. Dad and I on the summit. Very windy. Icy winds caused us to made a quick u turn back down towards the bealach as the cloud blew in and out.
Keen to race back to my wee nipper and the majority of the walk under our belts we pressed on with a spring in our step. A happy walker and glad to be back on the hill

We retraced our steps down to a small cairn in the bealach which marked the top of our descent path. Retracing our steps back to the bealach. 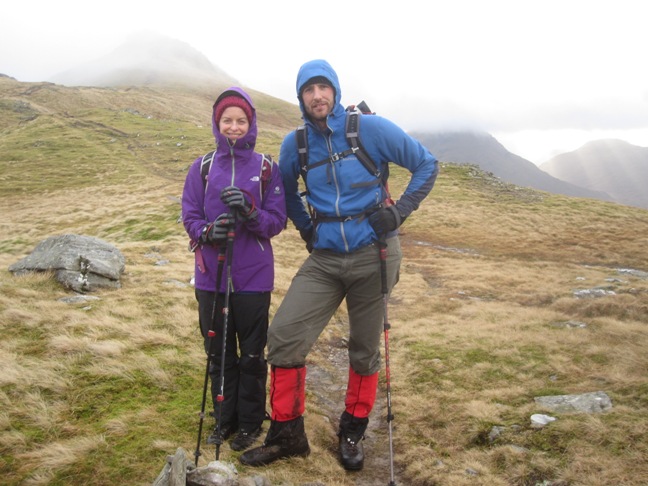 After a while the path petered out but it was simple enough to pick a route down. Now out of the wind finally we stopped for lunch and some more rum on a lunch rock with a view! Nothing better, and topped off with some tasty home made bread sarnies, thanks Dad! Stop for a bite to eat Alistair eyeing up the route down

The weather held and we enjoyed a nice easy walk down the slopes to join the landrover track back out. Brilliant to be back out and sneak a few into 2016, after all what year would be complete without a hill or two!

Hi there, it looks like you really enjoyed your long overdue hill day. Hope it's not such a long time the next time your back on the hills, good old Granny and Grampa letting you enjoy your day in complete confidence

The "Crianlarich" hills and those around Arrochar were where I cut my teeth in the hills. In my pursuit of ticking hills off list I've not been back for years now. I really should make a point of returning sometime during 2017, as they are great hills.

What a lovely way to spend your first day out without the wee one - and I'm sure Granny enjoyed it too!

Thank you for the comments! Yes Granny can't wait for the next Munro I suspect

They are great hills, looking forward to Ben More one day soon!