Winter solstice approached and the days were nearing their shortest with only seven hours of daylight; insufficient time for some of the longer and more distant forays on my 'to do' list. The forecast for Friday 17th December was good so I decided on a tour of relatively nearby Marilyns none of which I’d visited before. If the weather was kind and the roads clear then I planned on five, while ready to halt earlier if I ran out of daylight or into bad weather.

Aiming to begin walking at sunrise, I left home at 7:35 and had parked at the start of the path and was on my way by 8:35 - five minutes before sunrise. The sky was clear and it was already bright enough to have begun walking earlier. The route is well signed to the foot of the hill and there was only a slight covering of rapidly disappearing frost as I scaled the steep slope to the summit and its trig point. From there my next objective, Eildon Mid Hill was clear. 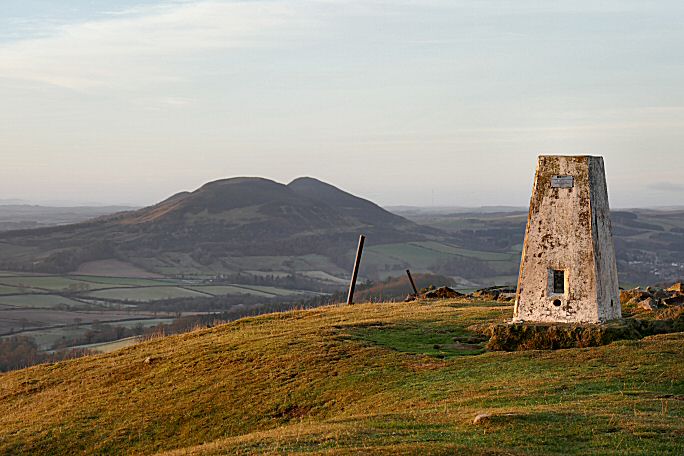 The Eildons from Black HIll

I parked in a long lay-by on the B6359 beside the golf course. A good path led past the course then bridged the Malthouse Burn to the worst section of path I encountered that day. With shrubbery on either side a very muddy and slippery groove headed steeply upwards; fortunately not for long. On the descent there was just enough of a grassy verge to give better footing and avoid any uncontrolled slides to the bottom. In comparison the rest of the path was easy and I reached the top at ten o’clock to clear views all around and a cool breeze. As I left I met my first fellow walker of the day. Of the day's hills the Eildons deserve a return visit to climb them all and visit the Roman and other archaeological sites. 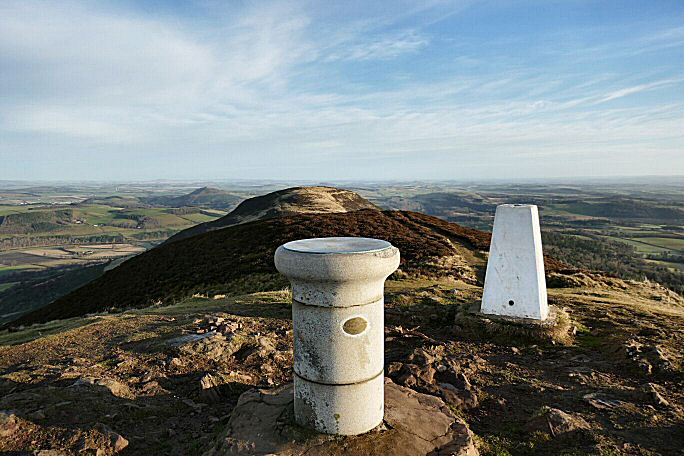 Parking isn’t so easy in Clovenfords, but I found a nearby street with a small layby marked ‘Visitor Parking’ that seemed to apply to me. It was near the start of my chosen route which began by threading its way between farm buildings including a shed full of cattle. A good sign, I thought, for my next intended peak. I followed the track through fields of sheep and past signs for Meigle Circular and Gala Circuit routes. 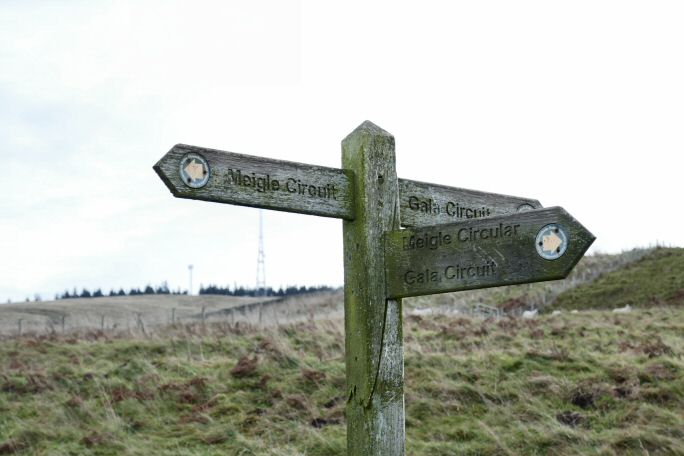 The track ran out near the trio of aerial masts on the summit. There I found a large erratic boulder – the only one I’d noticed on my way up the track. A walker then arrived from the Galashiels direction. Was this Wallace’s Putting Stone we both wondered? We agreed that it possibly was, parted, and almost immediately another walker arrived who was a local and told me where Wallace’s stone really was – through a gate in the dyke, and past the large 2m high cairn. I followed his instructions and found a larger erratic 47m east of the cairn. 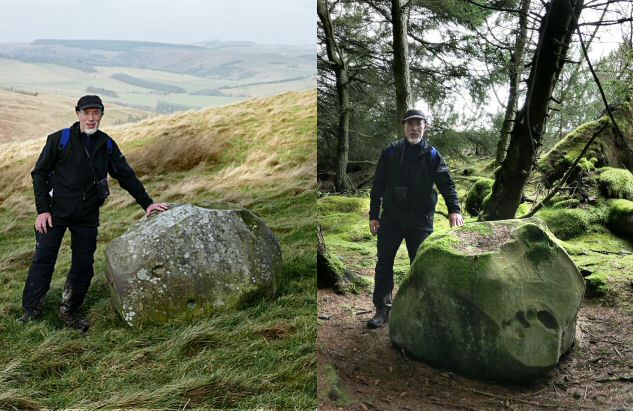 Is this Wallace's Putting Stone? ---- No its this one hiding in the wood!

When I examined the WH 1:25,000 OS map closely afterwards it did have a mark at the correct location.

On paper this was the easiest Marilyn of the day, but it did hold a surprise for me. The ascent from the large parking area at the cattle grid on the B6362 from Stow wasn’t a strain with just one obstacle to surmount. At about 200m from the start an easy climb over a dry stone dyke with attached barbed wire fence then met an electric fence running around inside the dyke. 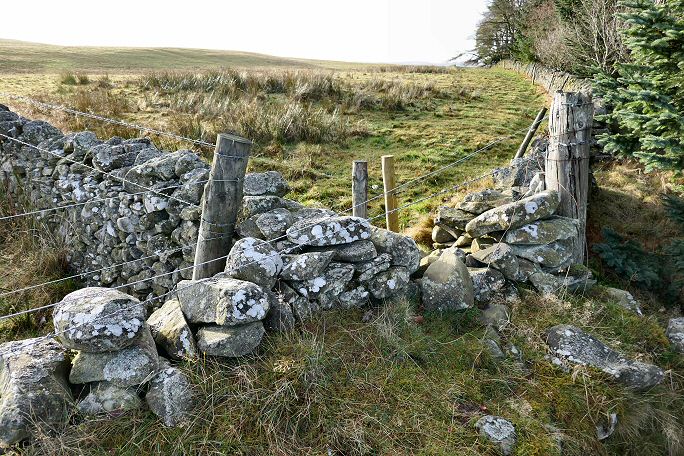 This too is easily passed by walking beside the dyke for a short distance to where the wire sags low enough to step over it. As I walked along I did see fresh cowpats, but no cattle. I assumed that they were in cattle sheds like those at Clovenfords. I then managed to overshoot the point where I should have turned right for the trig point. The wall shown on the map heading west for the summit is now only visible as a line of stones near the trig point and doesn’t exist at all where I’d been walking further to the east. 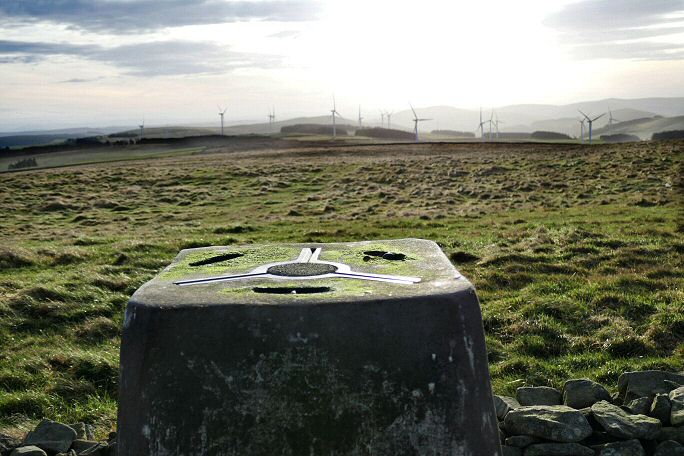 At the summit as I took photographs I heard a loud noise behind me. Quickly spinning round I saw a large head rising above the hillside about 50m to the NW. It sported a fine pair of sharply pointed handlebars and it was looking straight at me. 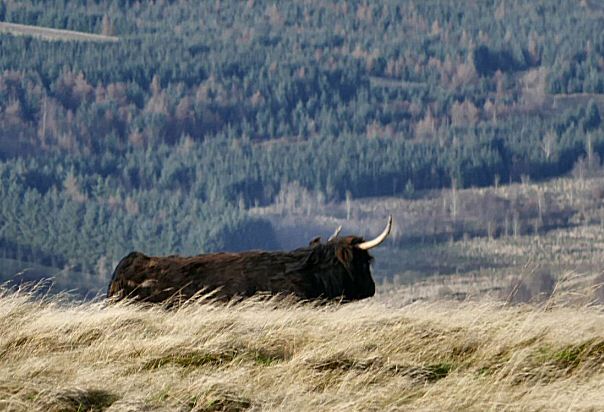 After a short inspection of this invader of his territory he bellowed once again, turned and gradually disappeared back down the slope. I decided not to outstay my welcome and retraced my steps back to the car without any signs of pursuit. It was now approaching 1pm and I was half an hour ahead of schedule so plenty of time for the fifth Marilyn of the day provided nothing went wrong…

This started with another overshoot. This time in the car. I’d managed to select the wrong N/S road on my SatNav and was on my way to Romano Bridge when I read the road sign, realised my error, and then backtracked several miles to the correct turning. I was, however, still ahead of schedule as I parked at the now closed toilet block below White Meldon. 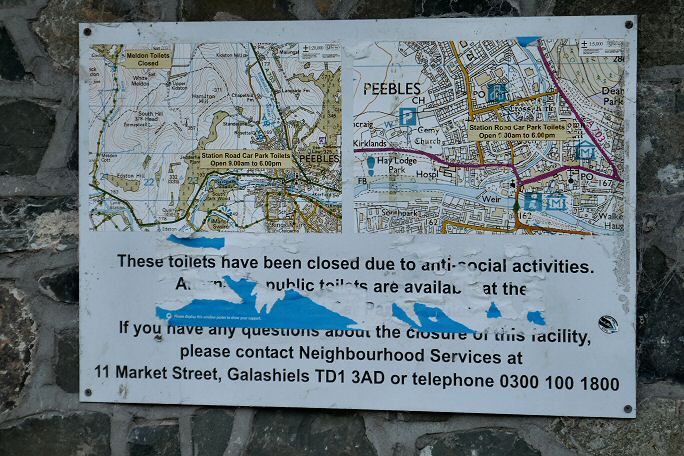 A stile leads to a footbridge over the burn to where eroded paths lead upwards through the heather. The summit trig point was reached at half past two. 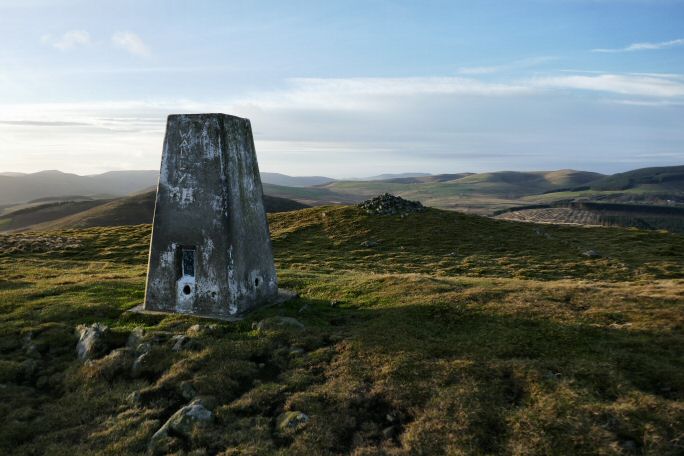 I did wonder if it was going to be worth staying for a while to see the sunset. That was an hour away and within a few minutes I decided I was going to get too cold. So it was back down to the car, mission accomplished for the day. I reached home just after sunset time - 15:38 hrs in Edinburgh.

From the start of the first walk to the end of the fifth was 6.1 hours so I did have more than an hour of daylight in hand (and lights in my rucksack). Total distance driven including my overshoot was 138 miles taking 3.6 hours or slightly less than my walk time. That made it a ‘local’ walk by my test of whether the time taken to do a walk is longer than the time to drive there and back again.

Re: A Borders Marilyn Quintet

These look like a good selection of short walks. Discovered the joy of sub 2000s last year, so looking to do a lot more in 2017 alongside outings to bigger hills. will no doubt be revisitnig your report again, thanks for sharing