We were walking by 6.20am, Darren having been first to emerge, closely followed by myself with Kev opting for maximum time in the bag and a lightning fast decamp. As we dismantled the tents and packed up all our gear, a landrover came down the track on the slopes of Culardoch, crossed the river and parked up behind us. We tried to convince Kev that this was the stripper, but he didn't buy the story about www.wildcampstrippers.co.uk - £10 per kilometre with a flat rate £20 surcharge in midge season and a further £20 refundable in the event of there being no bogs or river crossings involved! Sadly this was the only visitor to our campsite this morning

Alas for Kev (and Darren and myself too for matter), it was only a man and a dog that got out and headed up the slopes towards Carn Drochaid, presumably on grouse beating business. We followed on behind them up the faint boggy path and soon lost sight of them amidst the heather and the early morning clag.

After a brief and unnecessary detour brought about by having walked too far north as a result of having been distracted from rigorous navigation by the conversation which had by this point got onto the topic of Las Vegas as a honeymoon or general holiday destination and how many nights the average sane person could spend there before being rendered a complete basket case, we eventually righted our faux pas and got back on track. It probably cost us about 30-40 minutes of time.

Back on the path, by now a bit drier in most places, the temperature was fair shooting up and as we climbed higher, the blue sky began to pierce more and more through the wafting veil of cloud. We thought we might yet be in luck with a full-blown cloud inversion a bit later. It's a welcome relief when we reach the flat plateau and the first of the massive great tors which dot the terrain, Stuc Gharbh Mhor. From here we bear north west to the enormous tor of Clach Choutsaich before continuing on and then curving around to the west across the shallow dip towards the summit tor of Leadbaidh an Daimh Bhuidhe. West to the Munro summit of Ben Avon Across the dip to the unnamed 1136 metre tor Closing in on the summit playground

As Kev has already said, this truly is where three grown men became boys again as we clambered around on the huge rocky outcrop and swapped poses for the cameras. Lucy, initially reticent, even managed to clamber up on top, although the actual high point itself was somewhat beyond her clambering abilities. A couple with another dog had got there just before us having come in from the other direction, but other than them, we were the only people there. Indeed, it felt like we were the only people for miles around and this, coupled with the true majesty of this place, the cloudscape and the brilliant blue sky burning through it, made this a very special place to be at 9.30am this Saturday morning. The dogs feel abandoned down below Kev and the view back whence we came They sure don't make all the summits like this one! Right you are, just over there then! 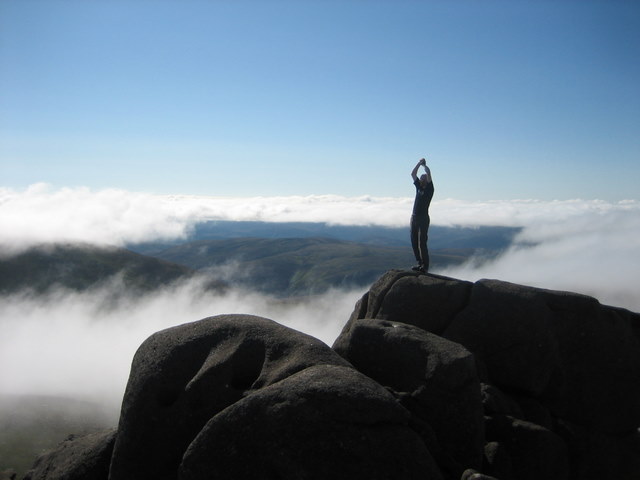 Kev, master of the universe! Lucy and the road ahead

Eventually, with a lot of kilometres still to get through today, we had to tear ourselves away. The road ahead looked no less appealing however, across the moonscape to our south west before hugging the vast trough of the Garbh Choire to descend and then reascend up onto the pass of the Sneck, across the little knoll of Cnap a' Chleirich and on around the ampitheatre of Coire nan Clach to the somewhat anti-climactic North Top of Beinn a' Bhuird. Along the plateau towards the Sneck and Garbh Choire Back to the summit of Ben Avon Darren hanging out on the edge of Garbh Choire North Top of Beinn a' Bhuird

From here we head south along the edge of the precipice as it plunges down into the enormous chasms to our left and down to the Dubh Lochan, before finally leaving the cliffs to cut across open stony ground to the South Top cairn, from where the main range of the central Cairngorms looks stunning over to the east. Up Coire Etchachan from the South Top (zoomed)

The back of the day is now well and truly broken, but we still have the long descent down over Carn Fiaclach followed by the potentially soul destroying march back along Gleann an t-Slugain to the carpark at Keiloch. Maybe the additional kilometres of the previous day begin to take their toll on me first, but I certainly seem to fall behind a bit as we descend to Carn Fiachlach. Things are somewhat enlivened by the eventful wade across the Quoich Water with Kev almost losing his boots and a pole and in the end being lucky to escape with just a boot going in the drink before he managed to fish it back out.

I think Kev started to struggle over the last few kilometres and in the end, Darren left us dead in his wake as he got his head down and went like a machine along the track. By the time we reached the estate road, I felt like every step was an effort of superhuman proportions and I was extremely glad to get back to the cars, from where Kev gave me a lift back around to Cock Bridge and I mananged to persuade him to join me for a quick pint for the road at the Allargue Arms. I tell you, I sat straddling that bench for 20 minutes or so as I drank my pint before getting up and doing a very passable impersonation of the John Wayne walk back to the car.

Did you climb Clach Choutsaich? Couldn't get up that one

Superb report and pics again Graeme,never having done any wild camping,I can only read with envy your wild camp reports every time you post them,never been in the "gorms" yet and can"t wait when I see pics like yours,only problem for me maybe with my gammy knee and heel,after 6/7 hrs walking i"m down to a crawl

These two hills look fantastic and can't wait to get properly in among them. A wild camp looks the way to go

. I fancy a Tomintoul-Braemar (or reverse) route but public transport doesn't seem to be much help

Excellent account, my man. Reads as well as I remembered it - a fab day.

I really, really want to explore Ben Avon a lot more (not bothered about Beinn a' Bhuird though - probably wouldn't do that again). I'd like to visit each of it's majestic tors. What a superb mountain it is. Great to see them in your pics - and all you posers!