The Merrick and Shalloch on Minnoch plus 2

The Merrick and Shalloch on Minnoch plus 2


Well this was a bit of a change from the A9 or A84/82. So much so that my in built GPS just constantly wanted to re-boot as driving the wrong way through Glasgow was just so wrong from a hill walkers point of view

As we are limited to such a small amount of daylight at this time of year it means that early starts are required un less you are happy walking in the dark, now I don't mind the dark but I am happier in the morning knowing it will get light soon 
So there I was just after 8am I was at the appropriate car park with the dilemma, do I park where it tells you to in the Forestry commission car park or do I do as Johnny Corbett suggested and drive on a bit ? Well I drove on over the wee bridge to just short of Kirrieroch house and parked there, The start of the forest tracks

this saved about 20 mins at each end of the day which is all helpful. I walked on the forestry tracks for 10 mins or so when my first decision was to be made, now as I was pretty much following Johnny Corbett`s route I went right or anti-clockwise viewtopic.php?f=9&t=32025 This turned out to be just fine, maybe a bit boring walking on the forestry roads but I saw it as a bit of a warm up before the main event. Now JC did this in 6hr20m so I tried to equal this but promised my self I wouldn't look at my watch all day unless it seemed to be getting dark. On I went and before too long I was at the end of the forest track facing a wall (which was pretty high) so I opted to walk up the wall or up hill till I got to a break or a lower/broken part so I could cross which after a couple of hundred yards I did, now as I didn't want to loose any height I opted to follow the contour round as near as I could to get me a good line for Benyellary then on to Merrick etc etc This was a decent idea if only there weren't so many tussocks I came over the wall just to the left of Jura`s heid and the light coloured grass was all tussocks !!

it was without doubt the worst area of tussock I have ever had to cross, oh and thank the wee man it was frozen or that would have made it a whole lot worse being wet too. Eventually I got to Benyellary summit and I soon saw that this was a very busy hill as the path reminded me of the lake district just so wide and worn as I said earlier I`m glad it was all frozen as this made things so much easier and a lot less messy. At first it looked like there may be some snow on top but this later turned out to be a heavy frost. These hills are very rounded in nature and therefore not a lot of photo opportunities came my way, this wasn`t helped by the fact that there was a mist sitting around 800mt all day which not only messed up photo chances it was also very cold. the views did open up and I got some nice views East over loch`s Enoch and Doon. as I said earlier the cloud base was around 800mts all day so as the rest of the route was below 800mts it was a clear walk ahead with no real problems other than the warm uphill walks with the sun on my back and sweating then the Baltic cold when I got to my next top so it was a constant case of Jacket off. jacket on, Jacket off etc etc. I was so glad that the part between Kirriereoch and Tarfessock was frozen as I`m sure with all the ice that was around this would have been a very wet walk indeed 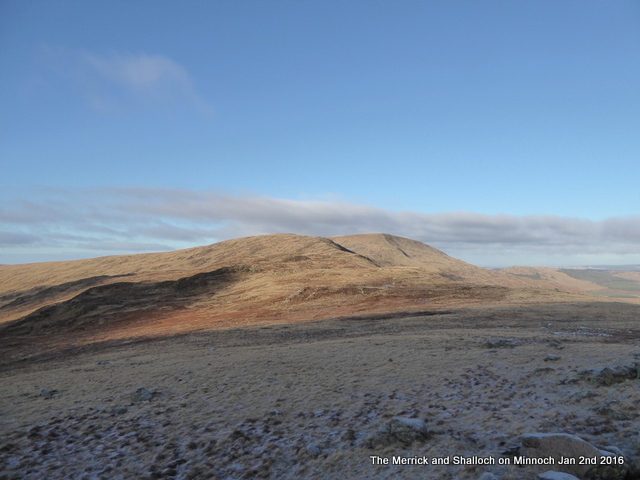 Soon I was on Shalloch on Minnoch then crossed it then heading south then south west following firebreaks till I got back on to the forestry tracks which then took me back to the car and to a point where it might be an idea for anyone else who does this route might want to park there car ? Right to go up and left on yer way off also maybe park car here to save having to retrace your steps ??

But realistically it will only save 20 mins on the walk back to where I left mine just at the back of the Loch at Kirriereoch . Only then did I look at my watch and saw that it took 6hr 45 mins and I did wonder just how JC did it in 6hr 20 Stats for the day

when anyone that knows me also knows that I don't hang around too much on the hills unless I have medical issues which could slow me down as they did last week at the Lecht with Mountain Thyme.

Pano of the summits crossed today :-)

So thats that, a fairly short day on the hills but long in the respect it takes over 2hrs drive to get there and back at night

However that's all part of the day as I see it anyway. that's me up to 105 Corbbets and a good start to the New Year and my target this year of around 150 corbetts.

Re: The Merrick and Shalloch on Minnoch plus 2

Re: The Merrick and Shalloch on Minnoch plus 2

Having endured the old WH route up SonM, as well as the new route I can very much recommend the route you took here to tackle this round (although adding on Merrick this time of year might have been a tad too far from me

). I was up repeating Tarfessock and ticking off Kirriereoch recently, using the same starting point as you - although I chose not to drive along the track myself. A nice circuit and you got a great day for it