On my tod for this one(apart from Breagh & Kerry my dogs) as alan s and JB likes a beer watchin there weans,was hoping I would be able to take plenty of pictures on this walk for 2 reasons 1 walking at my pace,and 2 hoping for descent weather,neither of which happened.
Got to layby 88 on A9 and ready to go by 9.00am,and was approached by another walker who asked where I was going and would I mind if he could walk with me,fine by me as long as your not a quick walker I said,quite happy for the company,soon became apparent he had no map or compass.
Weather was pretty poor from the start with low cloud,heavy rain,sometimes hailstones,and 25/30 mph wind,so with me doing all the navigation,no views and poor conditions no pics taken till we got to the summit of Carn na Caim where my companion kindly took summit pic, 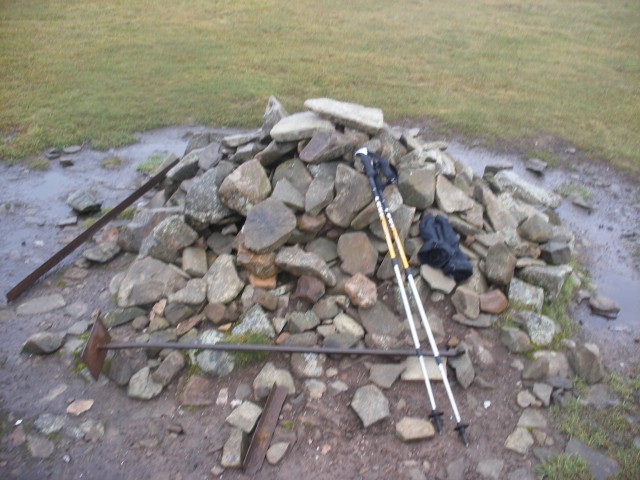 gammy at the summit

.no hanging around at top and made our way to the next summit,A Bhuidheanach Bheag with the wind,rain soaking us to the skin,and making the walk pretty miserable,where once again my friend !! took the last 2 pics of the day .
This was the last I saw of my new friend !!(clag had now lifted),because when I bent over to sort my bag,have a drink and put away my camera,my new friend!! had disappeared into the distance,without as much as see you later.
So much for doing all the navigation in all the rain.clag and wind,maybe I smell,have halitosis or am just poor company.
Like I said on my tod on this walk.

I know there is a track over much of this route but that plateau without a map and compass...

Good report mate,glad you have started to smile in your summit pics

Charmin'! NOT! I'd have been pretty p***d off if someone tagged along with me just for the navigation and then, when I'd escorted them to the 2 summits, b*ggered off without a word! What a prat! Can't believe someone would tackle those without a map & compass - like Leithy said - 'that plateau' - there's not much in the way of handrails or landmarks up there!

What a dreish day you had for those - looks a horrible day. And with it being a plateau, you'd have precious little time out of the wind and hail, if any!

Oh well, at least you've got 2 of the more boring Munros out of the way

I did those on my own too - there would have been no way Richard would have plodded between those - he hates that kind of thing!

good report mate hoping to finish off these two soon ,welldone in that weather

Leithy Sububrs your right that plateau with no map or compass,very feature less,there is a track most of the way over the 2 summits,and you can follow a line of fence posts that mark the boundary line for part of the way to both summits,but in clear weather,very difficult when clagged in

.
alan s smile no time to smile,serious stuff in that weather.PS MIND THE WEANS SHOES THE NEXT TIME YOU TAKE THEM OUT MATE

.
MC was a bit **** of when he just left,dont like these sort of plateaus either in that weather no place at all for any respite from the wind and rain,2 fairly boring hills to be honest,as you said at least there out of the way

.
JB cheers mate,you will skoosh this walk m8 18km and all the hard work is from the start till you crest the rise between the 2 summits,then fairly easy walking no matter which one you do 1st,I went for Carn na Caim to climb into the wind,and then had the wind at my back on way up the 2nd

That was an odd encounter you had on your walk, gammy leg walker

Nice report though. I haven't done much walking around Drumochter, but it is an area I fancy doing more walks in

If you're not 'bagging' WA, do the western ones only! They're great but the ones east of the A9 are deadly boring! The 2 which go up from Balsporran Cottage B&B (Geal Charn & A' Mharconaich) are 2 of my favourite Munros so far

The folks you meet

walk aboot wrote:I haven't done much walking around Drumochter, but it is an area I fancy doing more walks in

They are great easy winter hills - nice views even from the eastern ones:

But better from the western ones: Yup, that's why I fancy walking more there. Did a winter skills day on the Sow of Atholl earlier in the year, and the whole area looked terrific.

They'd be a great place for that WA

Yep, i agree with Kinley about keeping those hills for the winter months. I also kept the 4 munros and the corbett on the west when the snow was more than visible.

Just a shame you never took a picture of your M8, you could have exposed him on here for what he done to you.

Nice bit of walking even if the day wasn't as nice as it could have been. With regard to the chap who just wandered off, I got to thinking it might have been something to do with the non-verbal conversation your pic portrays.... 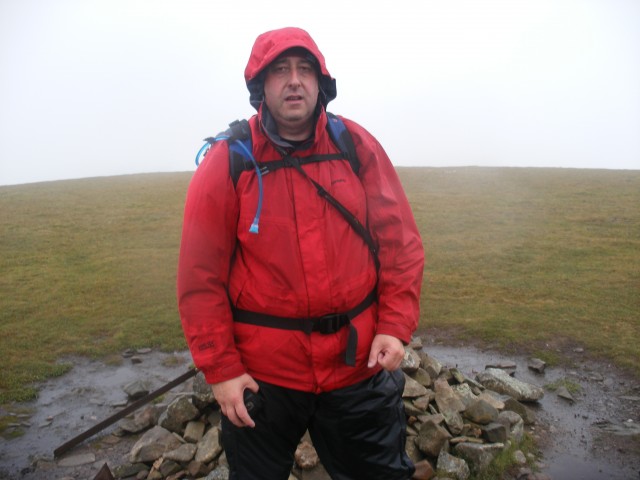