Growing up on Skye with family in Glasgow, I have been up and down the road between the two a lot. Later studying in Glasgow with home back on Skye, I've endured the 916 bus more times than I can remember. Citylink is so dreadful that it took a couple years before I actually began to appreciate quite what a brilliant road it is, absolutely packed with amazing views. Rannoch Moor, Glen Shiel, Loch Lomond, Glen Coe, glass calm Loch Lochy where you finally get to overtake the campervan, Eilean Donan Castle, Sligachan, Cluanie in the ice and snow and "the Scotland loch" from above Invergarry (where you can even see Rum from in clear conditions). All these postcard vistas had become mundane for me, just mile markers for how long before I could get a McDonalds at Fort Ooyum.

Leaving Scotland for a few years changed all that, and driving up to Skye on visits home, it was like seeing it all for the first time - but at the same time not new. I really liked the pride I felt for the beauty of the familiar, and set myself the wee ambition of getting to know and enjoy the views from the road better.

My Munro target is to climb all of the Munros on the Glasgow to Skye road, narrowed down to the closest, or most prominent 100. In the last 3 years I've got up to 54 and with ice forecast and snow on the ground it seemed like prime conditions to scratch off number 55 - Beinn Challum. Fair to say I did not envision it being one of the grander walks of the lot. A big lump that qualifies for my list on the grounds of proximity, but at the same time manages to be almost completely unnoticeable from any stretch of the road. More reason for my reluctance was it's reputation as a boggy "swamp" - how can a hill have a swamp, I thought. So with Met Office teases of frozen-solid ground, and my new pair of cheap crampony things from eBay, off I set bright and early, leaving the car in the layby at about quarter to 8 in the morning. 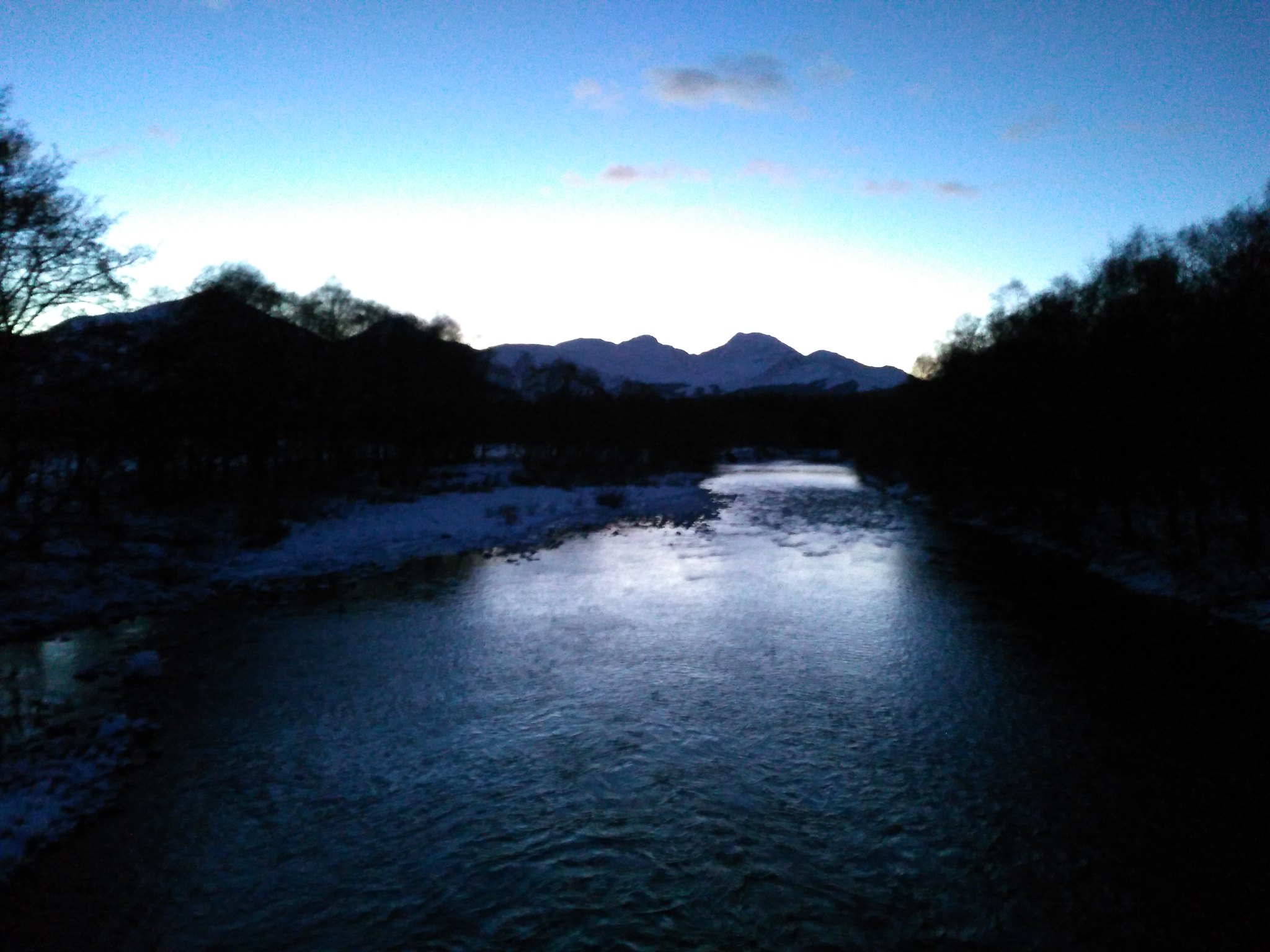 Crossing the bridge, looking towards the Crianlarich hills.

I faffed about a fair bit by the farm, getting confused by the walkhighlands guide's comment about the two large trees in the small graveyard. Small graveyard, with two very rubbishy wee trees was all I saw. In the end I just made my way over the railway, to the edge of the plantation and followed the deer fence up. Views back west were nice with the new moon still giving light. 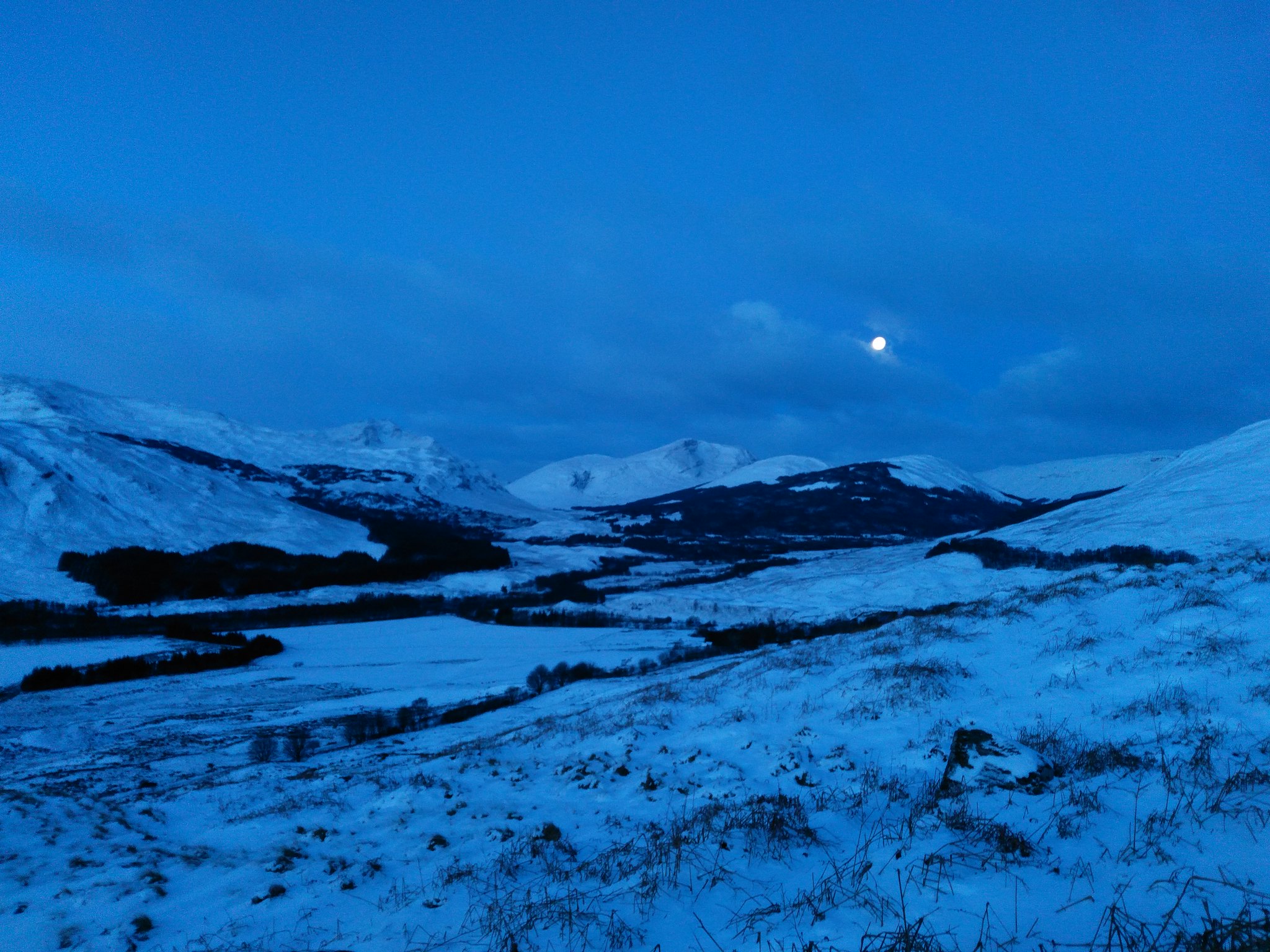 Need a better camera for this kind of thing

It was a tough slog through thick snow and soft ground underneath, even with the ice. But eventually, I reached the top of the view seen from the bottom where there were some big rocky crags. There were nice views of the sunrise starting to stretch across the Crianlarich range, from behind Stob Binnein and Ben Mor. 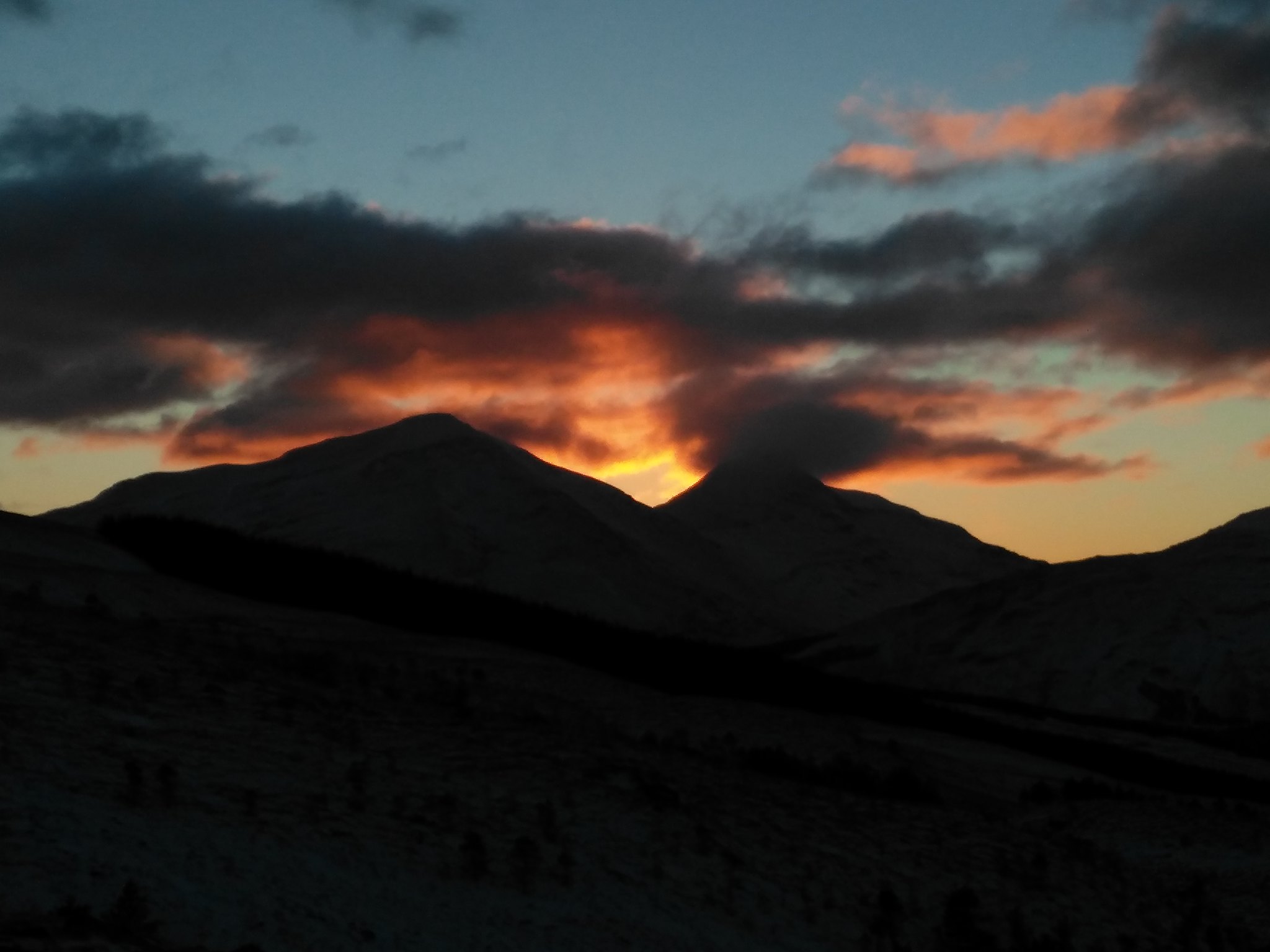 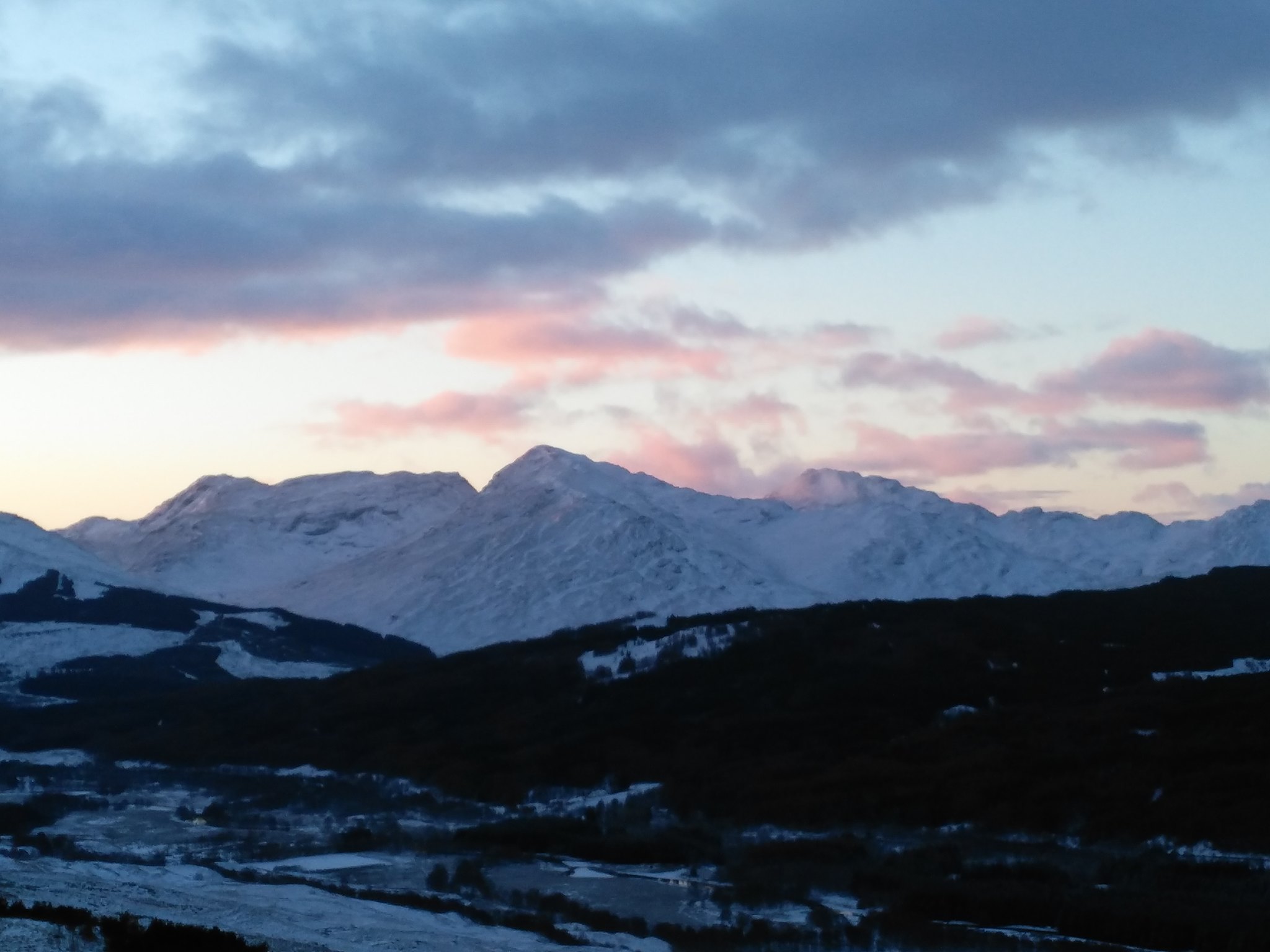 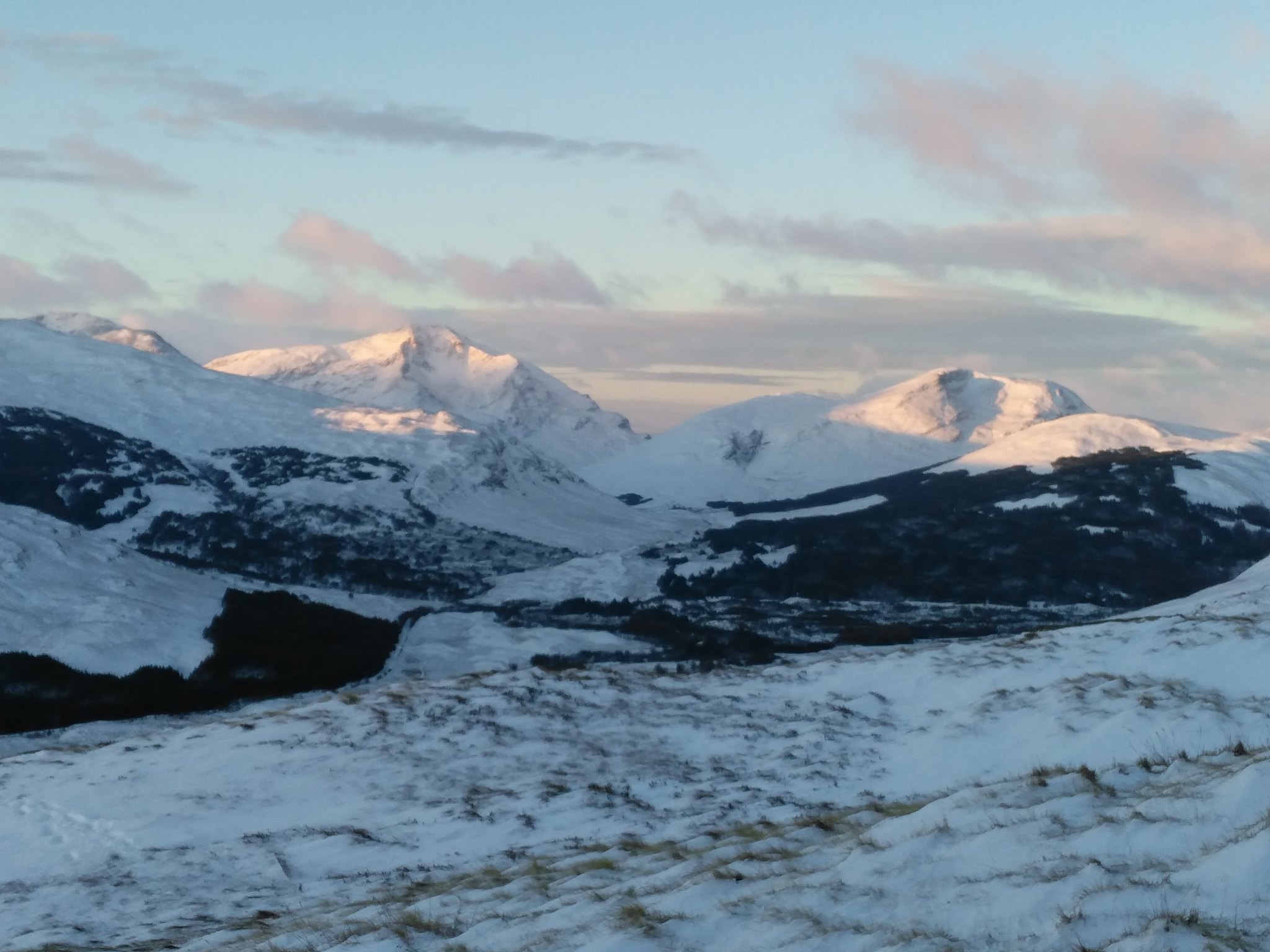 Back to Ben Lui 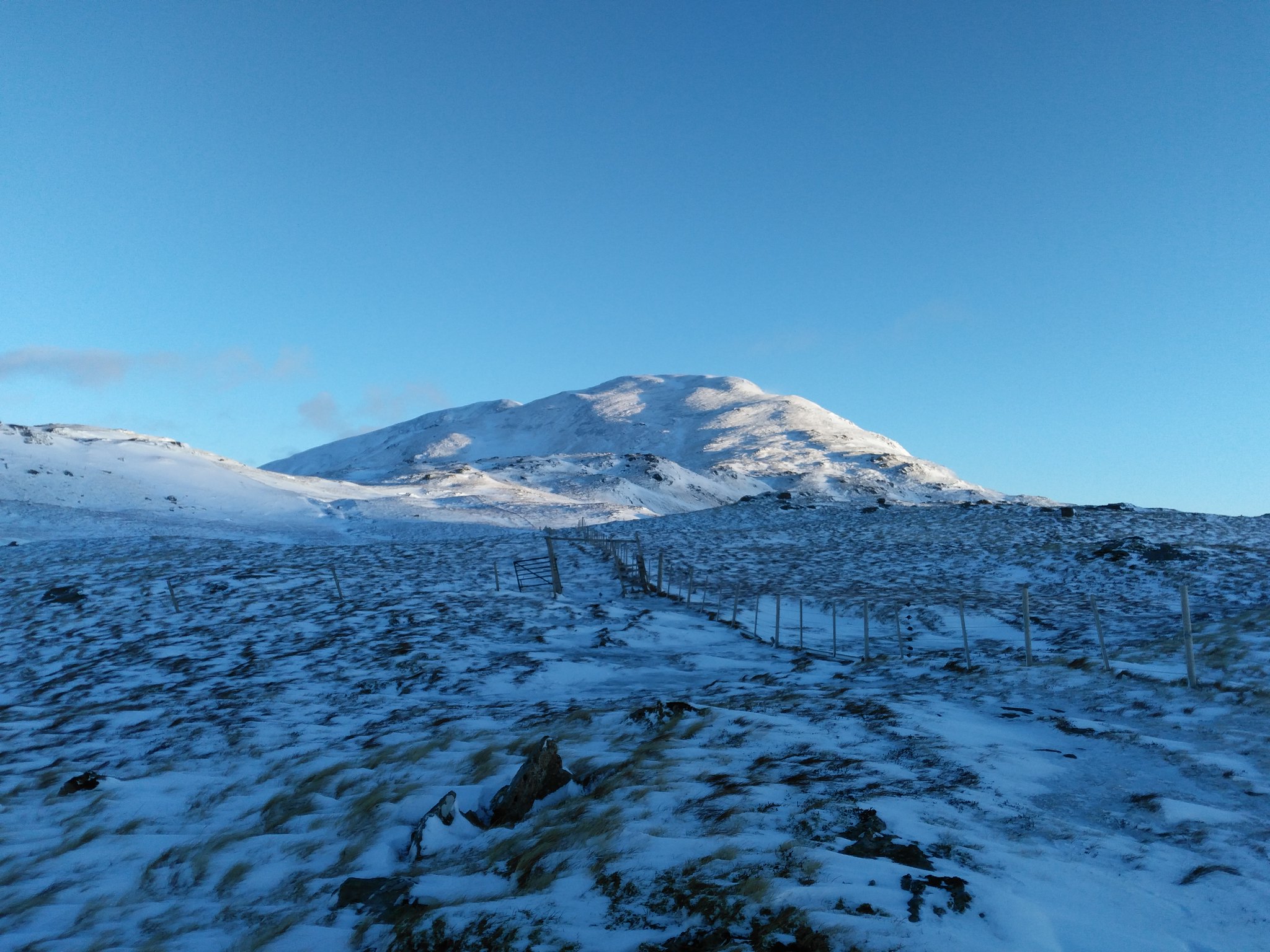 Plenty more tough slog to go, but by this height the ground was harder, and the daylight gave me a bit of a lift too. 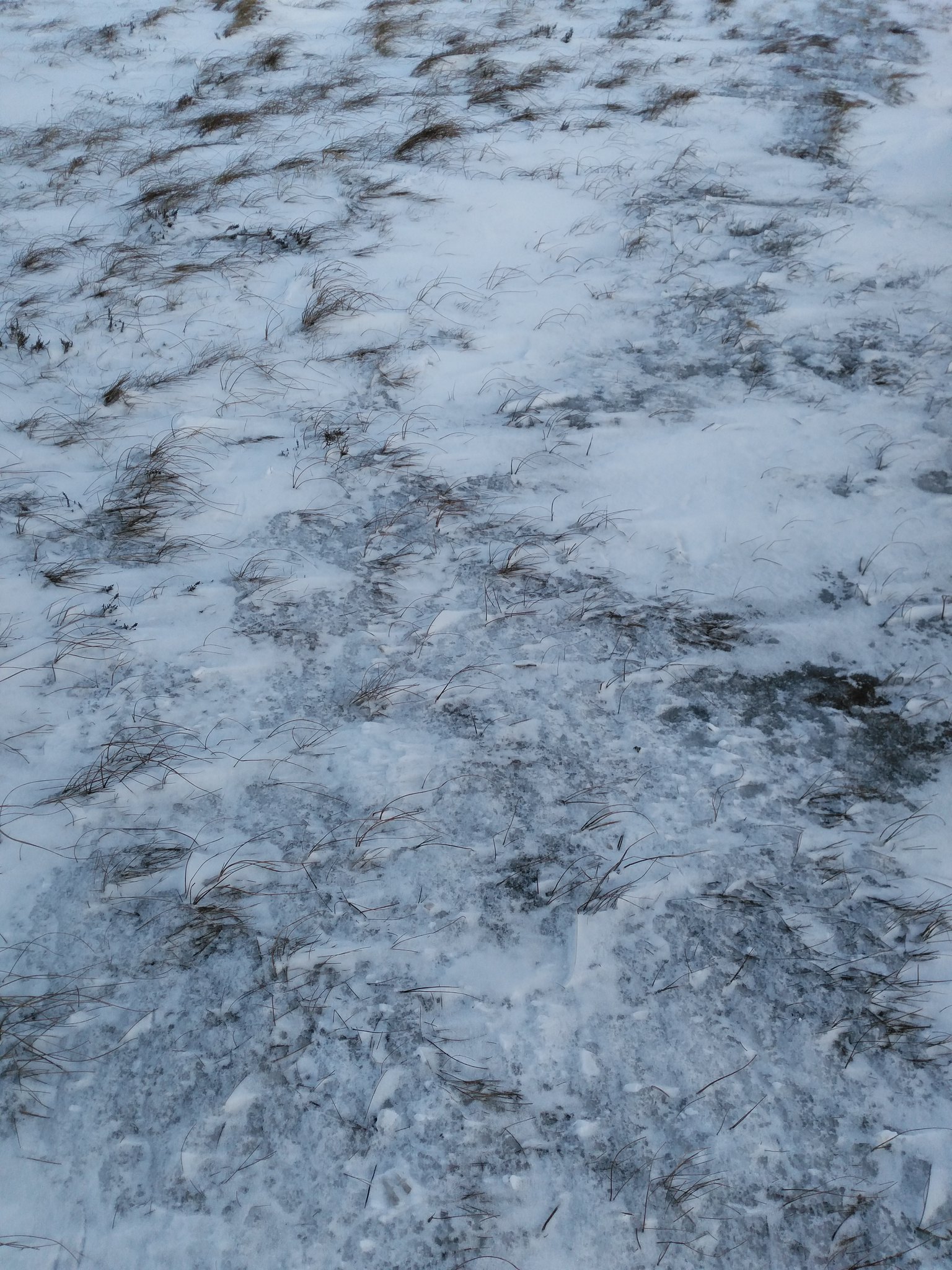 Call that a swamp? 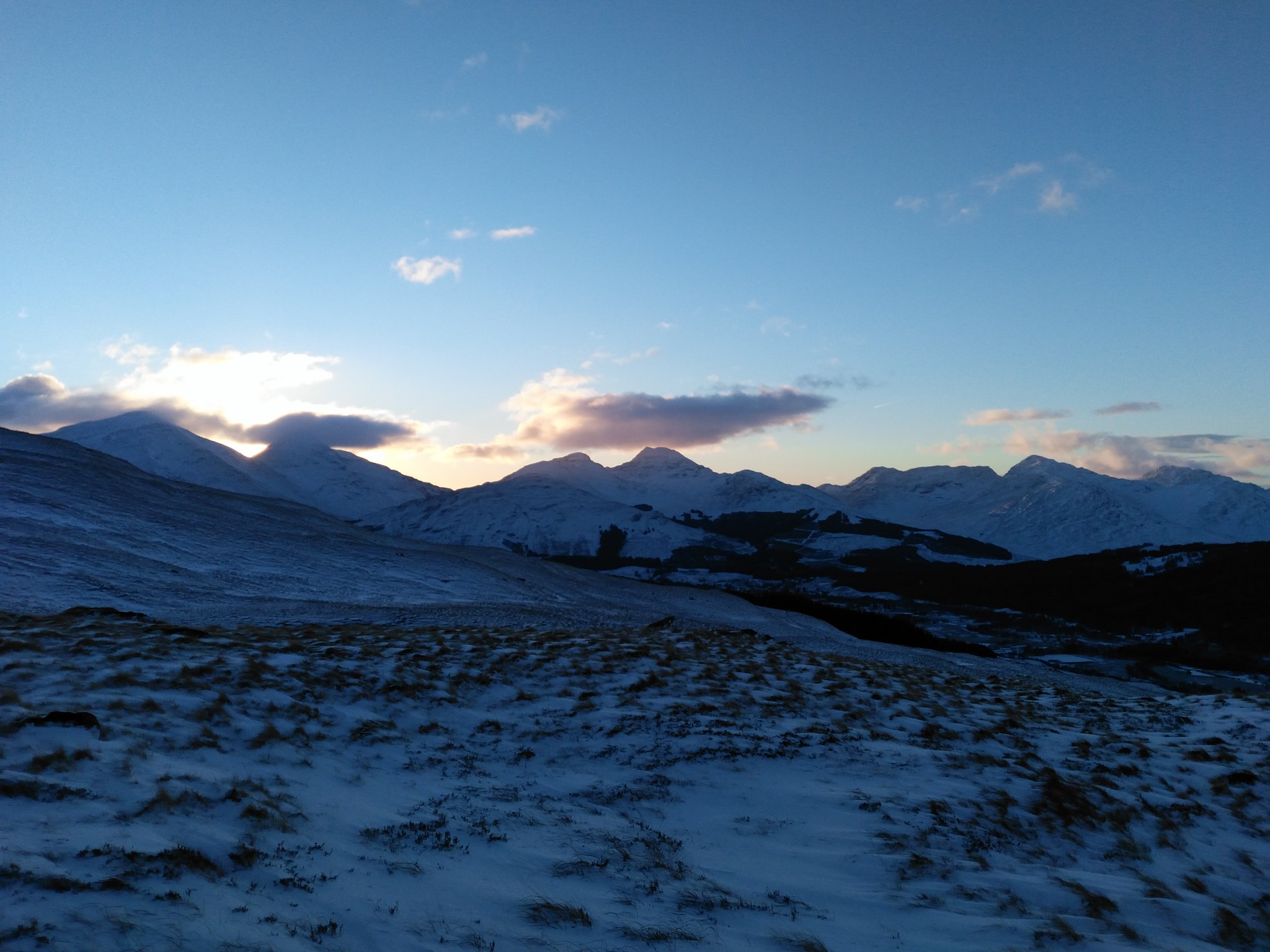 More views of the Crianlarich range 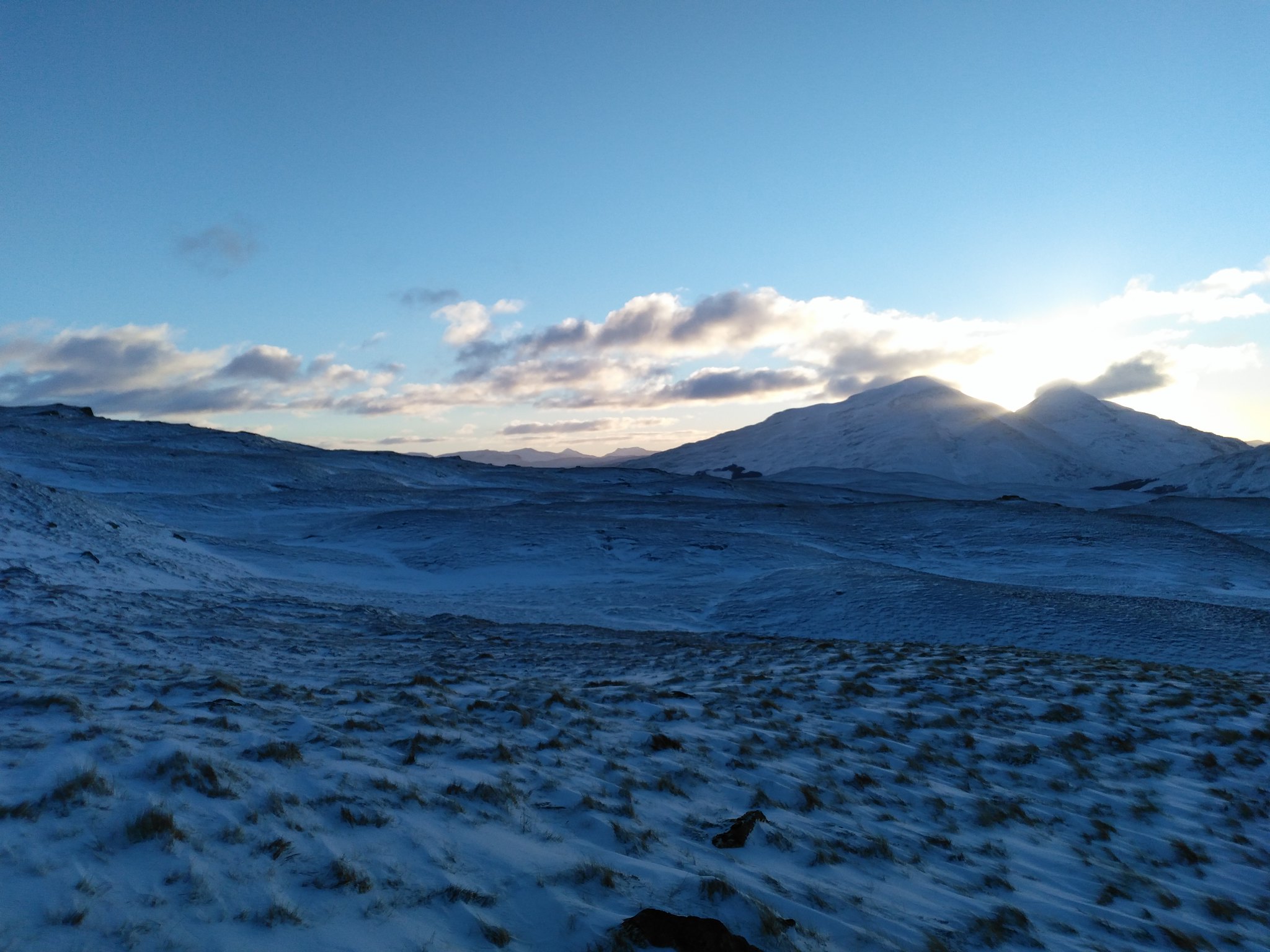 When the summit ridge came into view, it still seemed like a long way off, with the flatter but rolling moor to get across. Maybe this would be the boggy bit?

Feeling like the fence started going too far left for my liking, and wanting to have a more direct route up to the high ground, I skipped the fence and took off a bit more to the right. Stepping out on to some nice looking ice, it creaked a bit and then dropped me through into the bog below. My left leg went deep, and felt like it could have gone deeper. 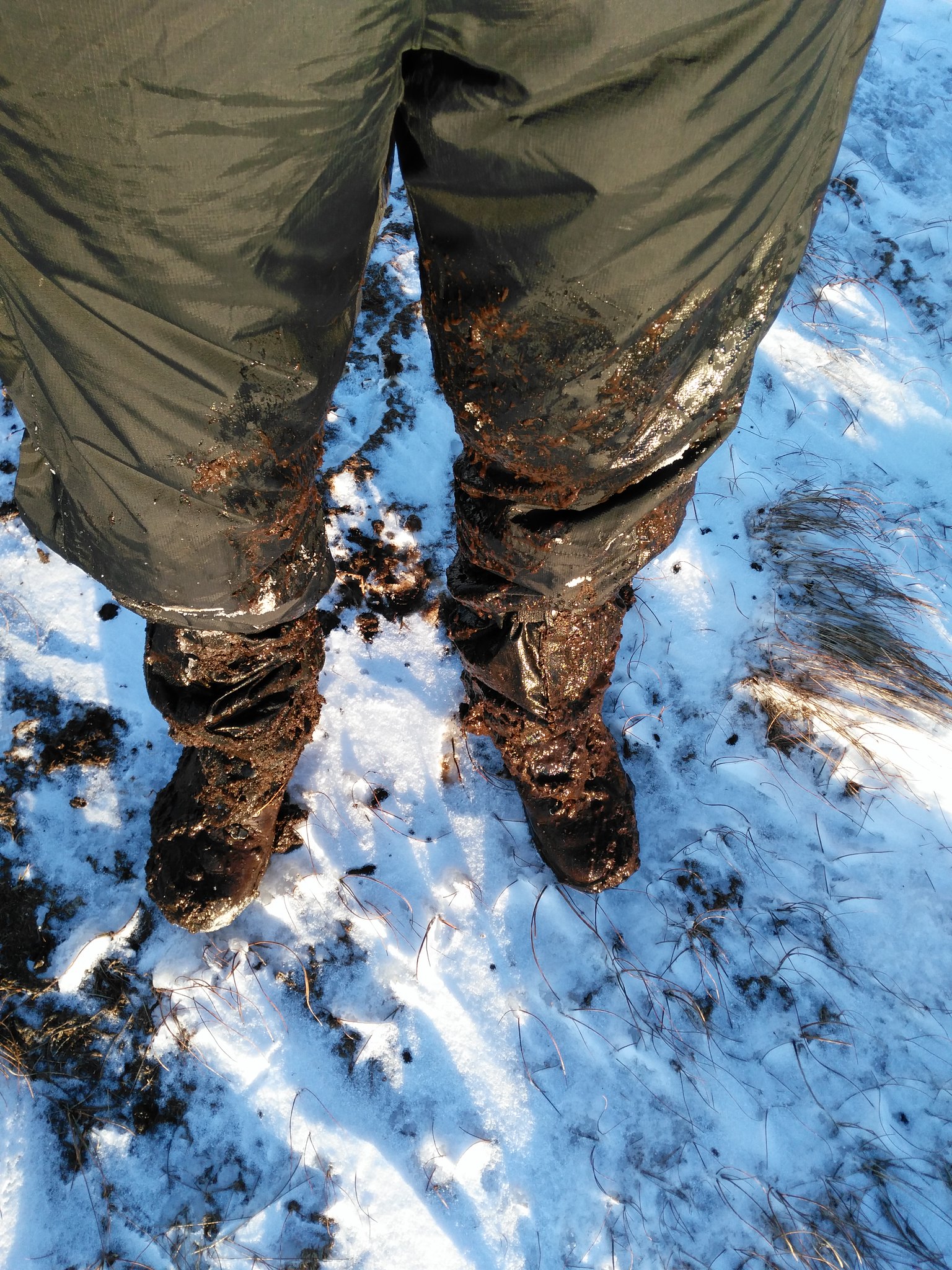 It smelled as bad as it looked.

With everything now much heavier, I rolled about in the snow like a daftie to try and get clean and light again and set off up only to find the fence rejoining me again from the left.

As the ascent steepened there were now sheets of thick ice over rock, so I thought it would be a good time to break out the crampony things. They are made by Outad, cost £16 something on eBay and were just great! I wear b0 leather boots and they seemed like a great fit (XL on my size 44 Anatom Q2s). Nice and snug but not pulling my toe up like I'd feared, or at least not as bad as I feared. I wouldn't want to walk all day in them, but for a couple of hours it was fine and my boots don't appear any worse for wear. I'd never walked in crampons before, and it felt great to actually look for icy bits so I could shoot up at twice the pace. Walking on snow and rock I hardly noticed them, and so kept them on a lot longer on the way down. Outad = the business, highly recommend

Someone was catching up on me at this point, and being unable to ignore my competitive streak I bypassed the first summit in order to give myself a better chance of being on the main summit on my own for a wee bit. I was glad I did, because there turned out to be a lot more than one guy behind me. It seems like great minds think alike about climbing boggy hills on icy days, especially with it being a lovely clear Saturday morning. 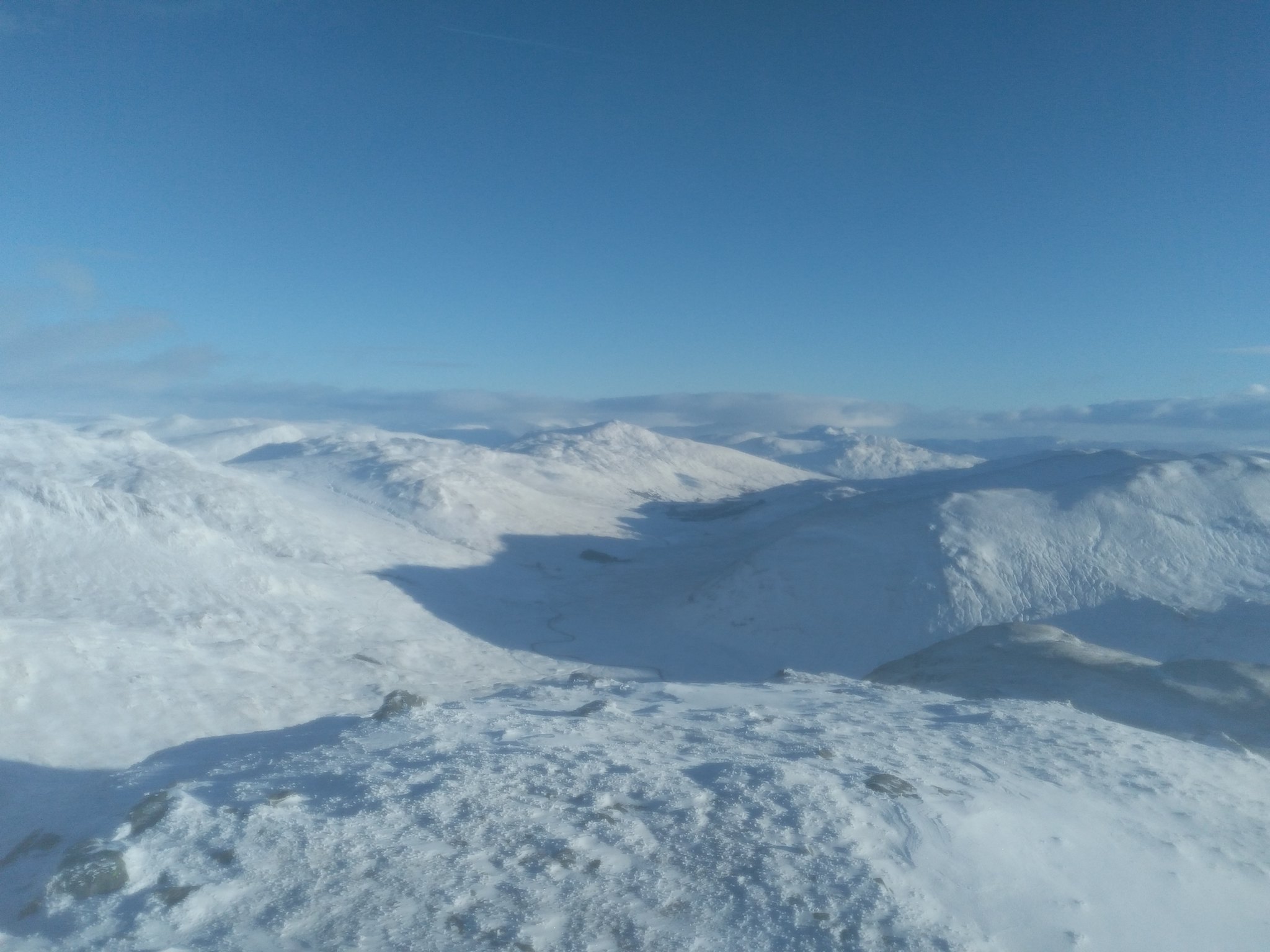 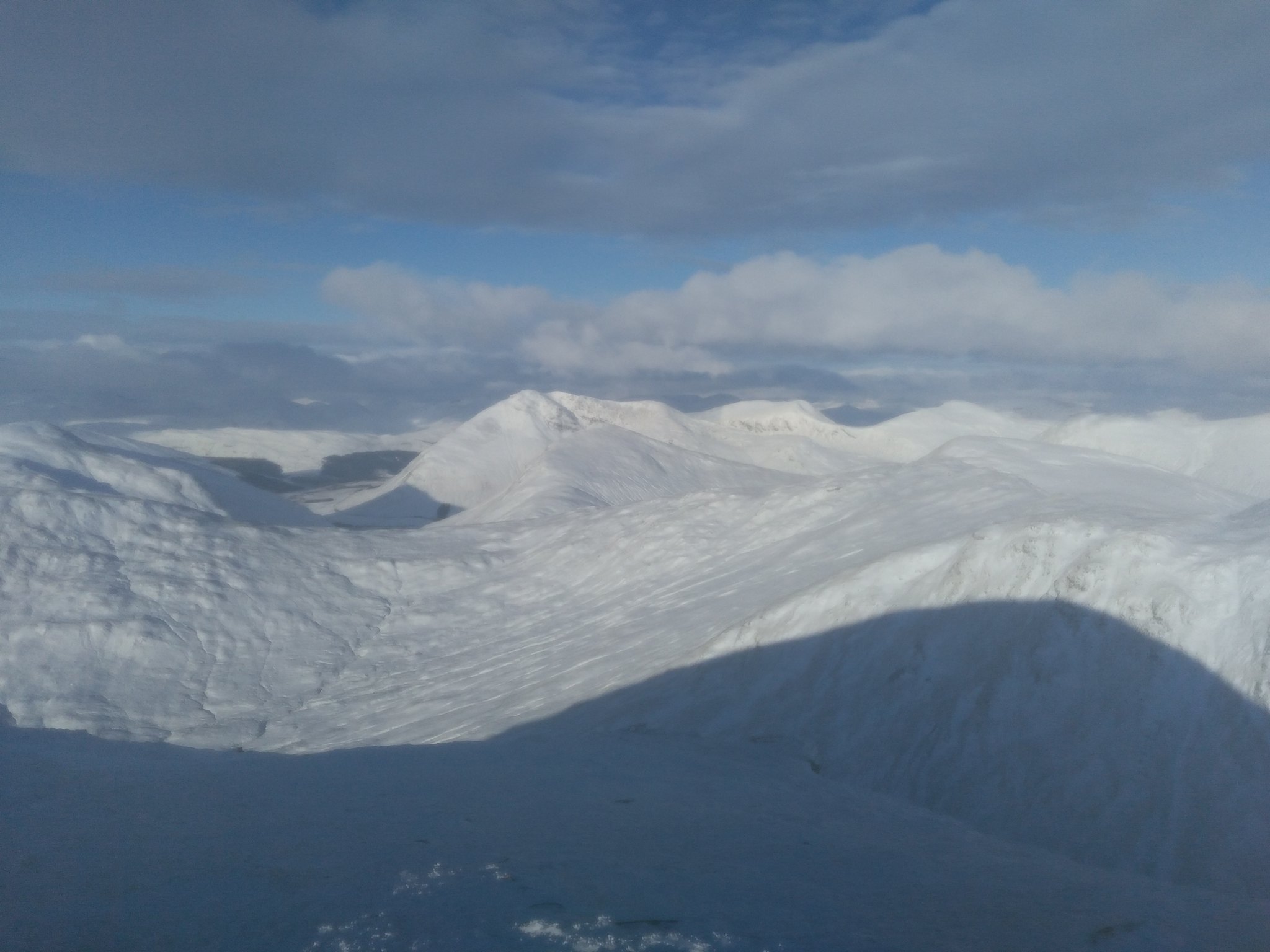 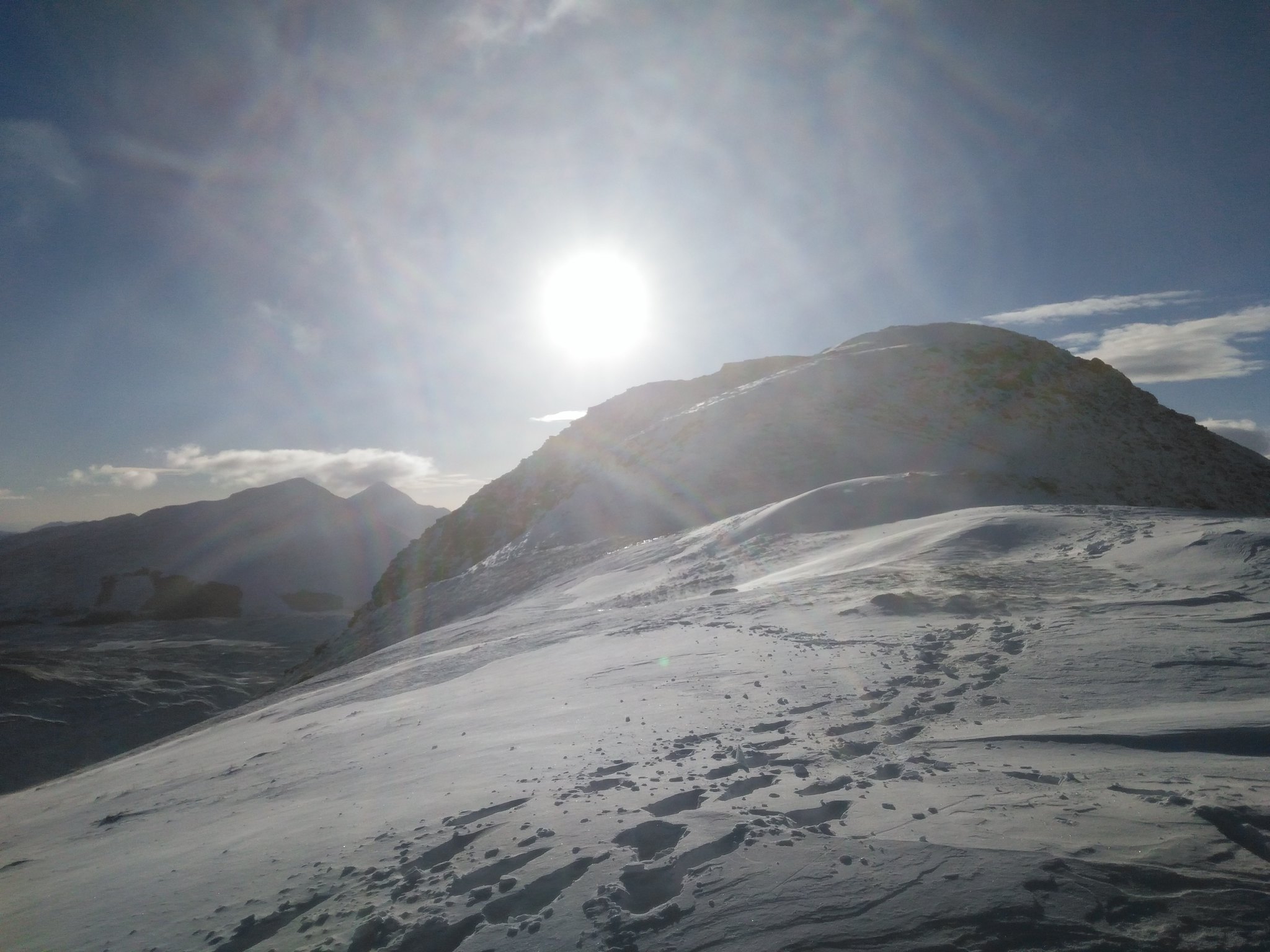 Heading back south to take in the other summit. Very windy here on the wee bealach. 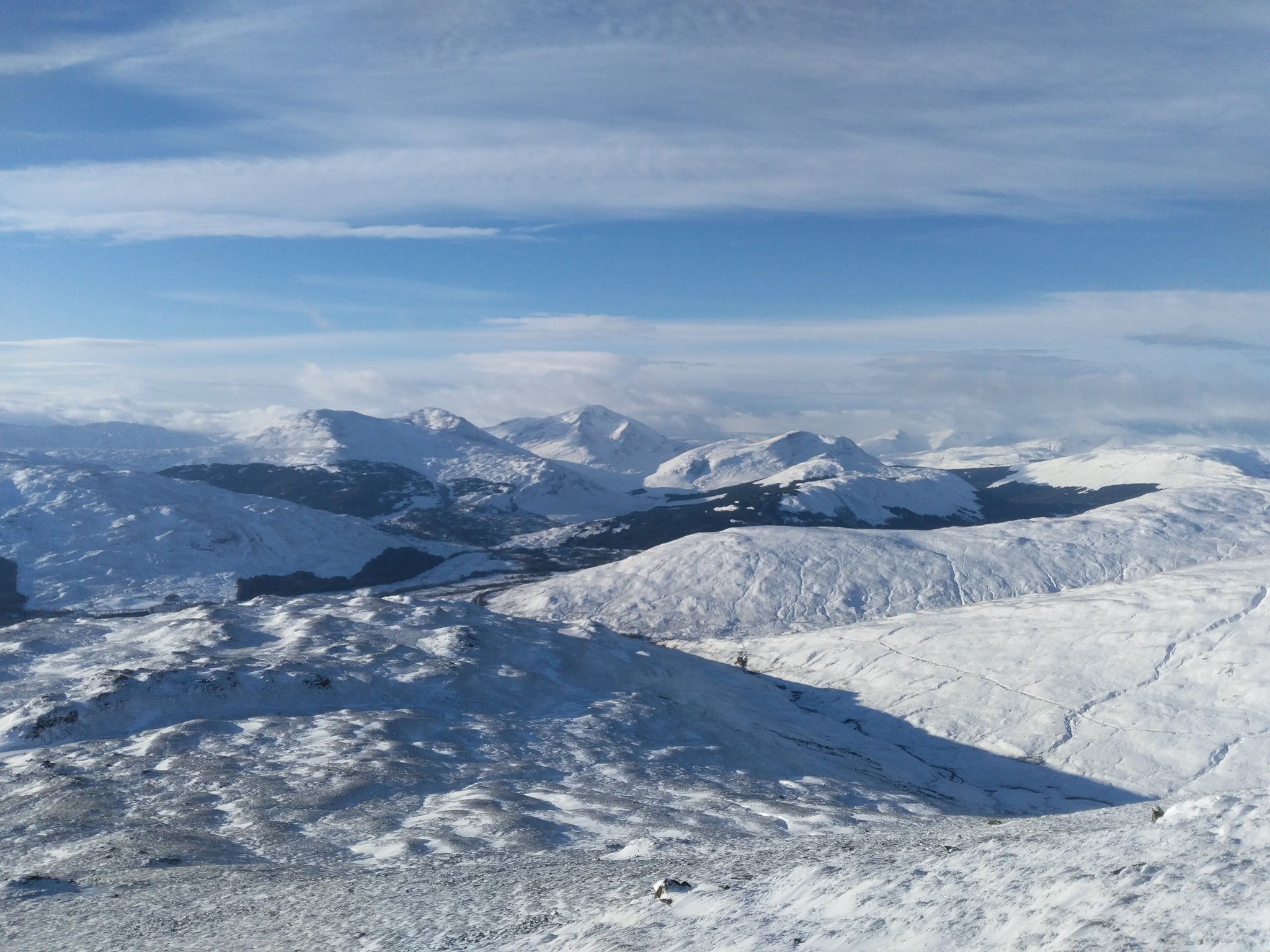 West from South Summit - Bens Dubhcraig, Oss, Lui, with Cruachan in the distance to the right 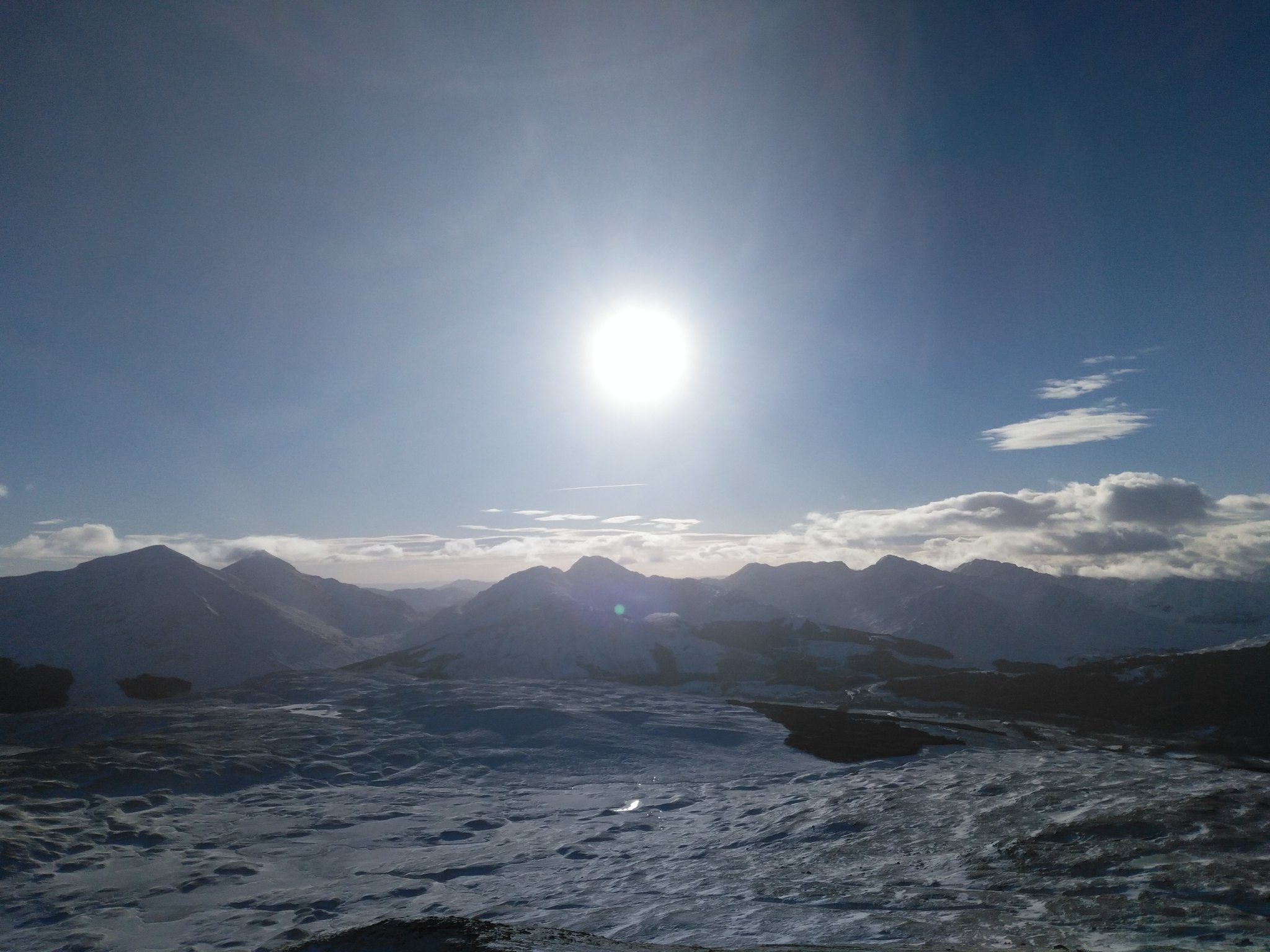 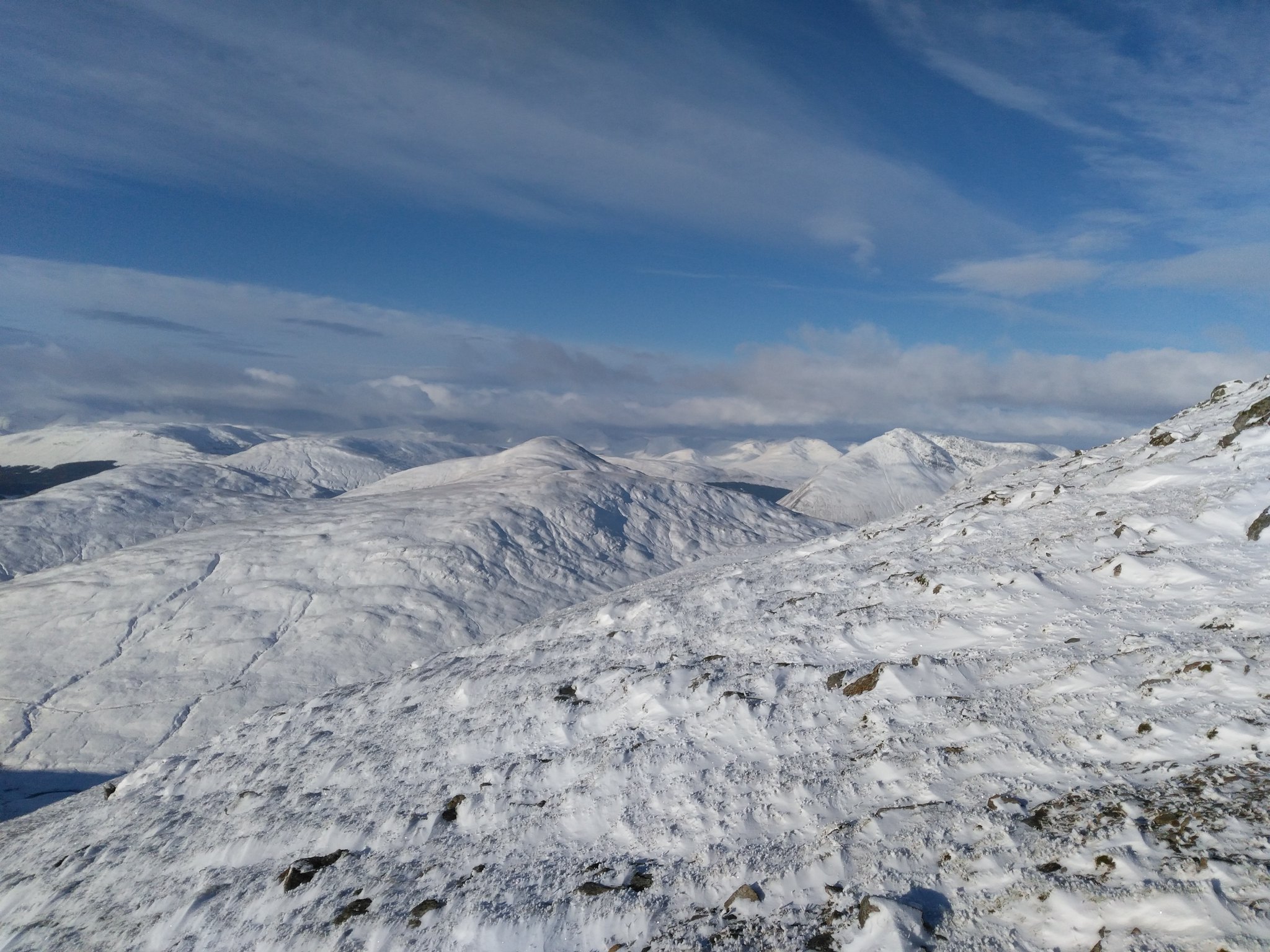 Lovely hill day, enjoyed a wee coffee here by the first big cairn on the ridge.

Much busier on the way down, with lots of folk to stop and say hello to. Stuck to the fence to avoid the previous pitfalls. The descent, walking into the sunshine was really pleasant. The ground was becoming noticably softer though, and I ended up on by backside a few times. The only downside of this walk was that although there was lots of snow, there wasn't really anywhere for a good skite down on my bum. I'd not needed the ice axe, so that was a wee shame. Especially when there's views of sledge heaven on the Bridge of Orchy hills right next to you.

Back down after crossing the train line, I noticed the other graveyard. Either I must have been half asleep or it must have been really dark. I don't remember, anyway, a nice scene. 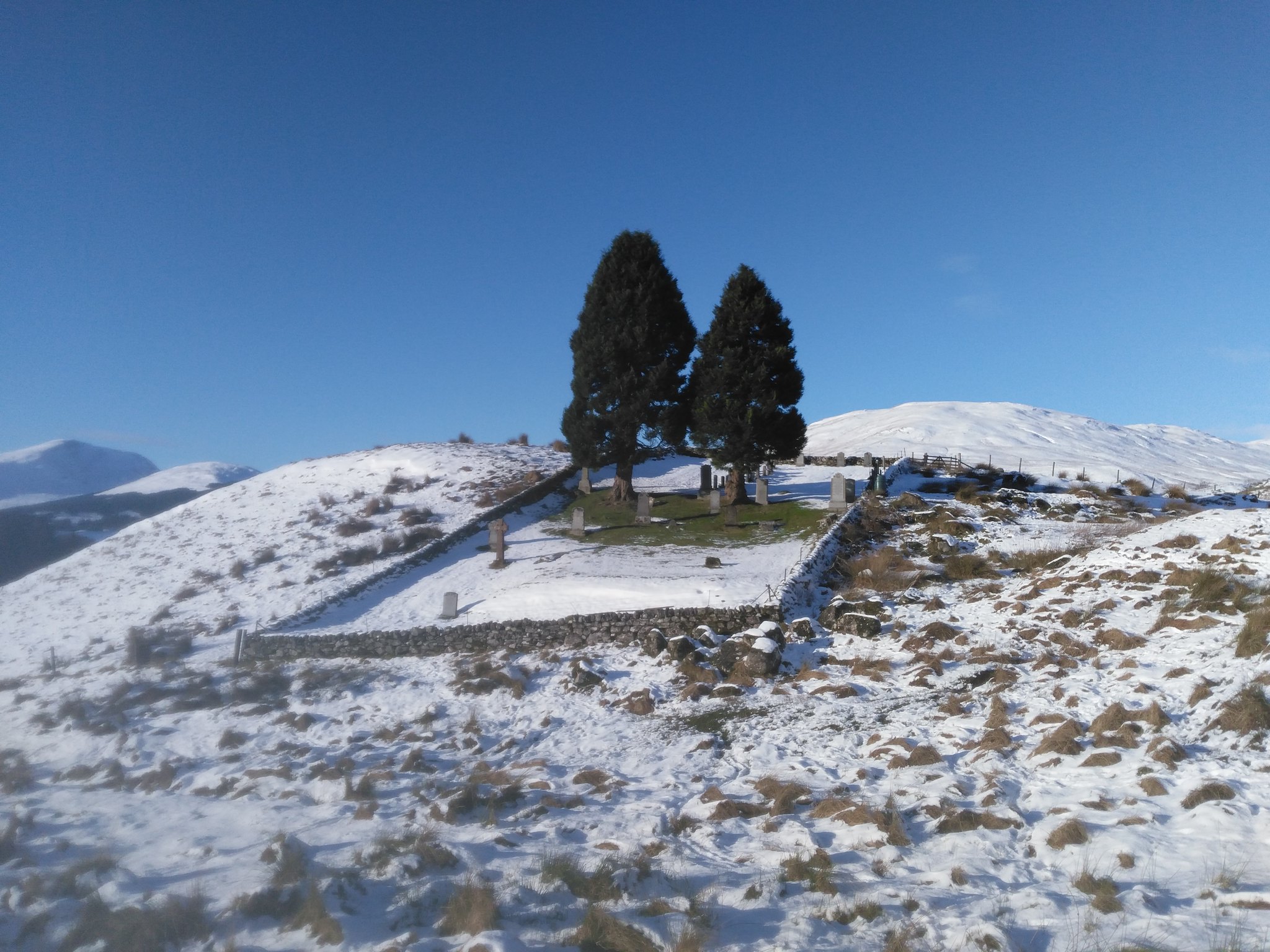 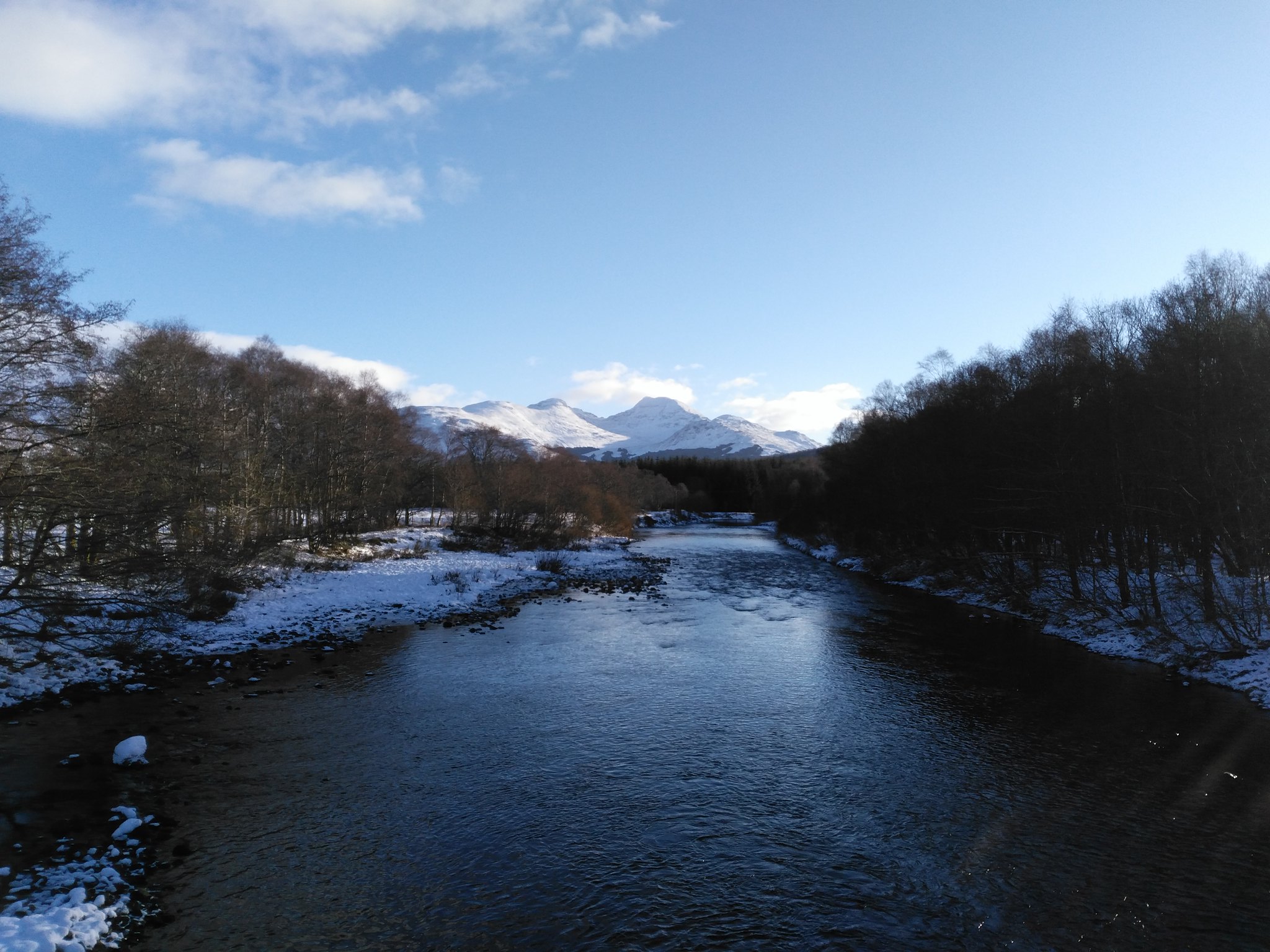 A daylight one to go with the moonlight one from earlier.

All in all, Beinn Challuim gave a much more enjoyable day than I expected. Now every time I creep in to Tyndrum at 28mph behind a tourist coach, I'll cheer myself up with an appreciation for a hill I'd never really given much thought of before. A lovely day.

Anybody know who Calum was?