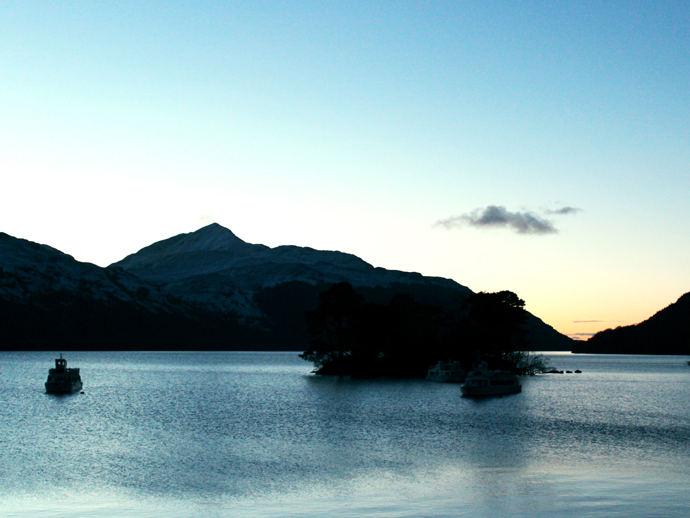 The cold morning light, the great silence, and the soft blue colours of Loch Lomond met me at the Sloy Power Centre. It was a sight that awoke my sleepy senses, and filled me with a hope that this could turn out to be an extra ordinary day.

Follow A82 for a short while only to make a turn eastward onto the road leading all the way to Loch Sloy. Follow this road until the second crossing, and turn left to pass a small bridge. Some yards later head off the road in the direction towards Ben Vane, and know that there are no more roads or paths for you to follow if you are the first person of the day attempting to ascend the mountain, and snow have covered all footsteps from before.

Although this was my first and only experience so far of walking the hills in winter time, it was a magnificence day, and the higher I manage to go, the higher I felt… Looking back towards Loch Lomond and the surrounding mountains all covered in sunshine. Looking solely at ground that sparkled like countless diamonds around me. Looking towards the summit of Ben Vane

I knew that this state of mind is slightly dangerous on a mountain, and I had no intentions of becoming a modern version Icarus who flew to close to the sun. I told myself not to take any risks whatsoever, and be wise enough to turn down if I didn’t find a safe and easy path up the mountain. It turned out that that moment would arrive very quickly, and aiming to ascend the first steep part upwards leading trough a gully, I found myself climbing and crawling on all fours in the snow. I was not in danger of falling, but when I looked up I found it difficult to know which way to go. I had no path to follow, and I could not make a decision on how to proceed. The only sensible decision I could make was to turn back down and call it a day. Icicles sparkling in the sun where I had to turn back

I followed my own tracks down, soon to encounter a group of four lads making their way up the hill. I told them of my decision to, being on my own, head back down. They then suggested for me to give it another try knowing that they were close by, and it all sounded good to me. These guys seemed experienced, being ex-military, and equipped to the teeth with fancy ice axes… Being if nothing else, quite agile and light-footed, I soon find myself back at the same spot with the lads far behind me. I waited for a while only to see them slowly come closer, and finally stop below my position, signing to me that they too were calling this mission off.

I went down the slope a second time, briefly talked to the others, and they had ran into problems with one of the lads having knee pains. I continued down and met a woman, and as I told her of my and the others hardship, she didn’t look very empathic but rather a bit angry – like “f’cking useless newbies, why do you even try?”. Given me being here in Scotland for one year only, it might be wrong of me to assume that it is a trait of Scottish people, but from my experience Scots are very stubborn and hate to lose. I must admit, at times, I wonder if the people here are a bit too harsh especially to themselves…

Further down I ran into two gentlemen making their way up as well, and after talking to them, I started to think that “got damn it, I will give it ONE more try”, If only to pass the gully. I was not the first up the hill anymore and as I for the third time came back to the same spot where I had previously turned back, I was just behind the two gentlemen. Although painfully slow they made their way up past the coire, and me getting that extra bit of confidence from not being alone, found it easy to do the same. Once we past the steep part, the gentlemen needed to rest and I continued on my own, but now with a track to follow. It was the woman´s track, and it was leading towards the clouded summit. I pretty much stepped exactly in her footsteps, and since this is a less tiresome exercise than making your own tracks in the snow, I soon reached her. As she noticed me, and smiled, I had to explain that I had given it one more try, and that it was easier now when I was not alone. Although I could not be sure if she was very happy with me tagging along, I didn’t really leave her with much choice, because it would have been absolutely impossible for me to go ahead and do this on my own. Picture taken in haste, as i did my best to follow my guide

I kept some distance and we started the walk again. I notice that she was not wearing gloves, but anyway was grabbing hold of snow and icy rocks, and it surprised me. She was methodical with her ice axe, digging down in the snow to find solid ground, and I followed her steps. At certain difficult passages she stopped to evaluate and make decisions on where to go next. At every single stop I would have had to turn back not knowing or having the confidence to proceed, but she knew and she didn’t hesitate. It was amazing to see, and I felt very privileged to be there and witness this ability of hers, and I can only hope to be this good at ascending snowy mountains myself one day. It was cloudy on the top, and it was nothing there to see except ice, but as I approached the top cairn she reached out her hand, and congratulated me. I was very happy, not because of my own achievement, that I anyway owed to her, but because I had this opportunity to see and learn from a master mountaineer.

Partially because I at one point needed to borrow her ice axe to get up and down from the summit, and partially because I had gotten so use to just follow in her steps, I followed her down the hill as well. As the path got less demanding we also chatted some more.

“Have you been up all the Munros yet”, I asked
“Yes… Four times”, she answered

as I realised I had followed the track of a true heroine, and that there was no way for me to ever look back...

I remember doing this hill a few years back, my first Munro but I certainly wouldn't have chosen it to be my first winter one

Be careful out there.

Hmmm.....I suspect you may get some "interesting" comments on your post. Although the shortest of the munros, Ben Vane is rather tricky in places even in good weather. Don't think I'd have tried that without an ice axe as a minimum and probably also crampons. I'd also not want to rely on following others and/or their footsteps as I don't really know where they're going and they may be disappear - would prefer to rely on myself (touch wood).
Nice set of photos - cheers

teaandpies wrote:I remember doing this hill a few years back, my first Munro but I certainly wouldn't have chosen it to be my first winter one

Be careful out there.

Yes, actually during the week I have second thoughts about this blog post, because it tends to “glorify” going up the Munro without enough precaution and knowledge… What the text doesn’t capture is that my fellow mountaineer took time to talk to me, and that I kept close, so I was far from doing this solo.

We encountered one scramble where I borrowed her ice-axe, and besides that there were nothing technical except some steeper parts in knee-deep snow. The two of us also discussed the issue of crampons, and it was her opinion that it was not really needed, since the snow itself gave good grip.

Would agree it's not the one I'd pick as my first winter hill, but you did the right thing in going back initially. Work up to these things over time so that you get the experience and confidence. I think most of us have had a hairy moment or two at some point, no matter how experienced or savvy.

I don't do too much in winter, and I pick carefully where I go, mainly sticking to the lower hills, and often doing ones I'm already familiar with. I met a young couple when coming down Beinn an Lochain on Sunday, and we chatted for a while. They seemed pretty sensible - the girl saw me and immediately said ' Oh we haven't got crampons'. I reassured them about any difficulties, mentioned the poorer visibility further on, but that there were plenty of prints to follow, and showed them the worst bit in terms of ascent, which was twenty feet away, but I said, if you don't feel safe, go home and come back another day. I looked back a bit further on and they'd got up the steep bit so I think they were ok. I hope so!
I'm not sure I could say the same about the pair I met further on. I really hope they turned back