It’s odd how the perception of landscape changes in winter. I’d always considered the drive from Stow to Lauder on the B6362 a pleasant experience. In spring and summer, moorland views sweep away to the horizon in soft yellows, browns and greens. But today is different. Today is compacted snow on narrow bends, spindrift whipping over hedges and black ice hidden in the shadows of trees. The road seems steeper somehow. I set my gloves on the rear bumper whilst I’m clipping the dogs' leads to their collars; in an instant the wind picks up the gloves and flings them into a nearby field. I climb a wire fence to retrieve them.

I’m parked up in a large lay-by beside the cattle grid at GR 481455. Opposite is a squat cairn. It has the dates ‘1911-2011’ engraved on a stone near its base. The drive down from Edinburgh has been deceptive mix of blue skies, bright sun and a temperature gauge fixed at -2 degrees. Out now in the full force of a raw north wind, it feels closer to -15. Still, this is a short walk –much shorter than my average dog walk- and overall ascent is negligible. Moreover, Sell Moor has been on my ‘To Do’ list for a while. I cramp my hat tighter on my head and put on my gloves. Moisture in the fingertips has already turned to ice.

I set off back down the road, over the cattle grid and find a wooden pedestrian gate in the corner of the adjacent plantation. The gate’s a simple affair, perhaps 3 feet high, with a metal catch. For some reason though, bright orange baler twine has been wrapped and rewrapped round both the gate and post. It’s a Gordian knot I’ve neither the patience nor inclination to unravel. I climb over it, lifting the dogs first.

Faint track southeast across the field

The ground here is cattle-trod and partly frozen. One step, I’m sinking my feet into invisible furrows of dank water. The next, I’m throwing my arms out like a tightrope walker to stop a fall.

The faint track heads first southwest, and then southeast, across a large field. The wind roars in my ears and the sun forces a squint to gauge progress. Big Dog is running in snow circles nearby. He’s a fan of poor weather – the worse it gets, the more he enjoys it. Small Dog’s the opposite. She looks like she’d rather be anywhere else.

The track reaches a stone wall beside a second plantation and, almost before I know it, I’ve arrived at the trig point. A large wind farm, not visible till now, impedes the view south. Westward is better –the Moorfoots range into the distance below cotton wool skies.

View south from the trig point 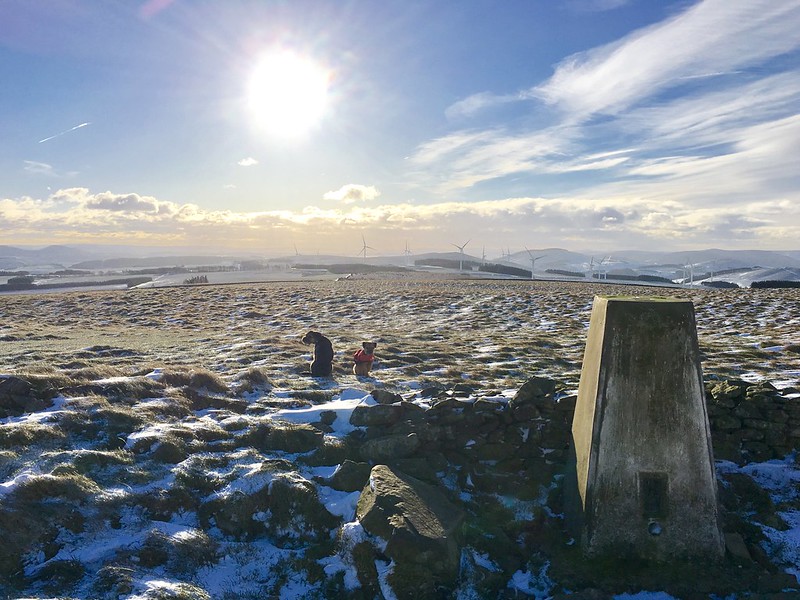 West - the winter whites and blues of the Moorfoot Hills 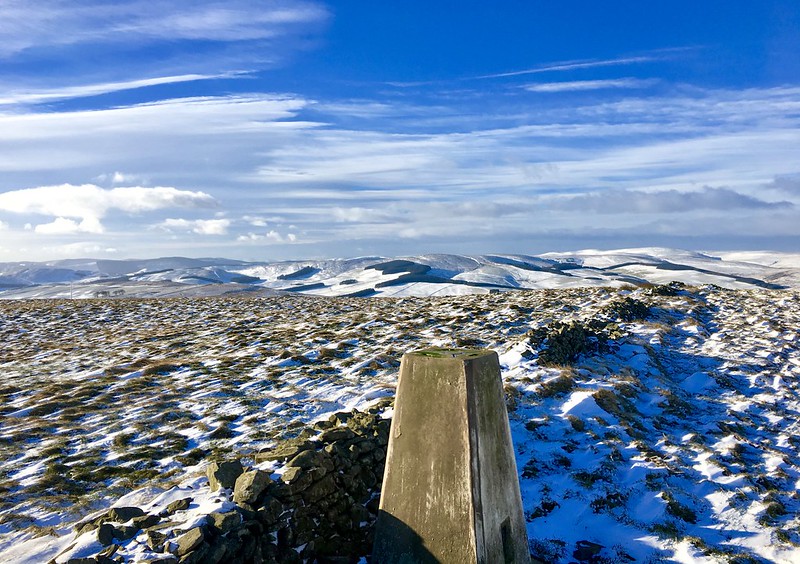 I take a couple of quick pictures on the iPhone and return the same way I arrived. It’s not a day for hanging around. As I re-climb the gate, I notice a large black cow sheltering in a copse. We exchange glances. Rather you than me matey I think to myself as I head for the car.