A glimpse of winter!

A glimpse of winter!


We have all been waiting for winter since last November... It was then when we tasted the first flavours of deep snow walking, but sadly the cold spell didn't last long. The next one, in January, was even shorter! It started snowing in Beauly Thursday afternoon, and it was all gone and melted away on following Monday. We were glad that the coldest day fell on Saturday, so we could take advantage of this mini-winter.
Because days are so short now, we looked for something relatively quick, to do in max 6 hours. Forecast suggested the best weather east-ish. I wanted to return to Ladder hills and visit the Well of Lecht, but we found out that the snow gates neat Tomintoul were closed, so we looked for an option somewhere along the A9. Meall Chuaich came to my mind and Kevin liked my suggestion. We had done it before, many years ago, on a cold, crispy November day, but I always wanted to return to this Munro in full winter conditions. The access is on a good track, and the climb is only 600m up easy slopes, so it's a good hill for January fun

..........
No silly ideas, we followed the usual route for MC, from layby 94 on the A9, the track along the aqueduct, to Loch Cuaich and up the slopes to the summit:

Track_MEALL CHUAICH 14-01-17.gpx Open full screen  NB: Walkhighlands is not responsible for the accuracy of gpx files in users posts
For more ambitious climbers, it is possible to add Graham Creag Ruadh, we had done this one in another winter trip and explored the whole length of its ridge - well worth saving for a separate walk, returning along Loch Cuaich. My old report on the Graham here.
..........
Back to here and now, when we arrived at layby 94, it was already full, a few other groups of walkers getting ready to set off. It was all winter wonderland, even the road The very top of Meall Chuaich was still in cloud but according to forecast, we should expect sunny spells in the early afternoon so we hoped for a clear summit: With navigation easy on estate tracks, we could spend more time enjoying the white views, something we really missed so far this "winter"... Our hill was patiently waiting for us...

To the south, the outlying tops of Carn na Caim still held on to more gloomy weather...

...but behind us, conditions were improving, blue sky showed up here and there. Kevin noticed a large flock of birds, from the distance it was impossible to say what kind of, but they made for an interesting photo:

We walked past the little bothy...

... and stopped on the bridge for a few "frozen river with white mountains behind" snapshots: Off we go! There were people both in front and behind us, it was nice to see others enjoying the hill as well, but the biggest advantage was, we didn't have to break the snow. All right, we cheated by using the footprints left by the two groups above us

To our excuse, the snow cover was deep in places, up to knee high and the 600m ascent felt more like 900m up Wyvis

But as a reward, we got this: Higher up we left the well worn path (which was filled with sticky snow) and took a shortcut on heather, proved to be a good choice, snow was not as deep here and walking much less strenuous:

Behind us on the western front, conditions were improving dramatically, cloud was lifting and we could see the white slopes of Drumochter Munros: The Fara, a superb long ridge, highly recommended to do as a circular: Having climbed 300m or so, we noticed that we were catching up with the parties in front of us. Nice as it would be to overtake other climbers

we'd rather let them do the hard job with breaking the fresh snow!

So we slowed down a bit, took more time to snap photos and enjoy the view. There was no need to hurry, we had plenty of daylight left...

The views to the west and south were superb, from A'Mharconaich to Monadhliath hills...

From near the summit, looking NW, the Graham Creag Ruadh seems so tiny compare to the surrounding hills. On the horizon Creag Meagaidh group: Monadhliath hills may look less remarkable, but I could easily spot the characteristic shape of Carn Dearg: Closer to the summit, the ground became more rocky, but there is an obvious path to follow. We did eventually pass one of the parties (they stopped for a break before reaching the summit) but there was no need to worry about deep snow here. Obviously wind has blown it away

Posing with the breathtaking view behind me. Who said Drumochter Munros are boring????? 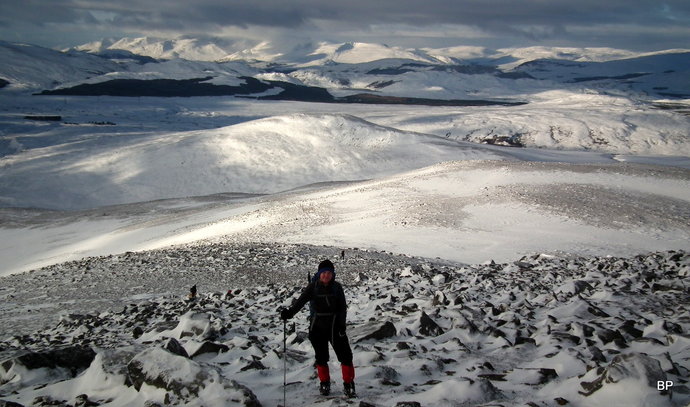 The summit was cloud-free now and the nearest hills enjoyed the sunshine, too:

I can't get enough of that panorama. Once again from a different spot: The summit cairn is big as for such an insignificant outlier. it was quite windy here, so warm coats came out of rucksacks: Lucy in the snow

I was hoping for a good panorama of the Cairngorms from the summit, but sadly, they were partially covered in cloud:

Schiehallion. As Muriel Gray once said in her Munro Show, you can see it from almost any given Scottish summit:

The dark face of winter weather:

The summit was busy with people, all trying to hide behind the cairn

so after a quick tea and sandwich, we packed up and began to descend. To our excuse, it was bl**dy freezing on the top and my fingers went numb after 10 minutes of standing still, even with thick gloves on! This is how winter should feel like, said Kevin when we started our march down.
As we descended, we still enjoyed the beautiful panorama in front of us, so worth the frozen digits

We took a slight diversion from the original path, going over Stac Meall Chuaich, to admire Loch Cuaich from above: Back down by the bothy, still winter wonderland: We returned to the car in just short of 5 hours. It was over too soon for me

I wanted this great winter experience to last, especially that we knew the forecast for Sunday... +10*C

..........
So we had our one-off snow wander, all I can do now is keep all my available digits crossed for another cold spell, though there is little chance of that coming for the next weekend

certainly very mild again this year. bought new crampons and never needed to use them yet.

Loved your photos. We were up there last winter and I decided to wait for the summit to take photo's and then cloud came down suddenly we had no photos or views until we were nearly down. Good plan to slow down and let the other party trail break

Good stuff. This ones been on the list for a while, as a stop off while travelling north. Looks nicer than I'd thought.

Ah so that's what it looks like up there

I had less good weather when I was there

Laughed at your carn na caim comment. Pretty sure that mountain is always in clag

Please please PLEASE may it snow in the next few weeks.... (dates already booked for mid-Feb...)