Sub 2000' hills included on this walk: Hill of Foudland, Hill of Tillymorgan


Hills of Foudland and Tillymorgan are on opposite sides of the A96 at the southern entrance to the Glens of Foudland, so seemed an easy target for the day of Harvey's walk.
Collected Harvey a wee bit earlier and then GordonC and headed off for Jericho - yes Jericho. I'd always been puzzled by the signpost to Colpy & Jericho as I'd driven past on many occasions. Browsing the map, I noticed that the Jordan Burn flowed down to Colpy passed Jericho Farm, so concluded that the person who named the farm had a sense of humour or was of a religious bent !

There's a sign at the fork in the road at Jericho advising this was the end of the public road, so we squeezed on to a grass verge opposite the farmhouse that didn't appear to obstruct anyone. As it turned out, there's a big area just inside the wood further up the un-tarred track which would have been a better parking space, well out of anyones way, unless the forestry decided to use it for storing timber. The additional walk was trivial, and soon we were out in the open, heading up the track to Hill o Foudland. With no livestock around, Harvey was free to snuffle at everything and anything. Soon we were at the Communications towers, wondering why there was a box outside the fence. Concluded it was an electrical isolator for the site.
With virtualy no breeze and the temp a balmy 13C, we we plotting by this time, having been too idle to stop and take our jackets off, thinking we'd have put them back on again at the summit.
Headed over to the trig pt. with great vistas over to Lochnagar, Mount Keen and maybe the end of Ben Avon, with Tap o Noth sticking up like a plook to the north. Didn't stop too long as a cup o coffee awaited at Morgan McVeighs.
Left H gnawing a chew in the car while we nipped in for a coffee & strawberry tart. ( GordonC nibbled surrepticiously on his sneaked-in GF biscuit.)
When we got back to the car, I could swear Harvey had a smile on his face. The car was full of dog gas, so we had to drive with the windows open for the first wee bit.
Parked by the Cemetry & walked along the A920 for a few metres then up the road to Culsalmond Farm. Start of track through farm for Tillymorgan

We had seen from Hill o Foudland that 3 new fans had been placed on Tillymorgan. Consequently, we followed the new access track to the westernmost of them. Chatted to a couple of young maintenance folk who were working on this fan. It was the first time I'd been right beside one of these monstrosities, and they are HUGE. Followed a track made by a forestry forwarder to get to the fence that runs along the top. Picked up a track running over the slate spoil heaps that led to the Trig point.
On reflection it probably would've been slightly easier undefoot to have gone left from the Fan to get to the fence earlier, on the crest of the ridge leading to the top . 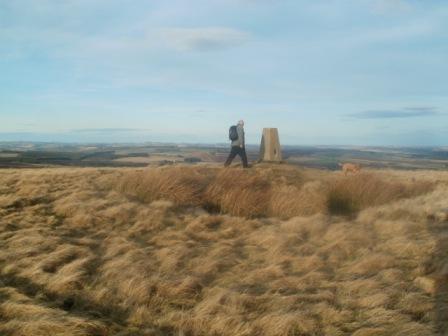 Harvey self cleaning in the wee summit pond

The views would've been fantastic, if it weren't for some 100 wind turbines that I counted with the naked eye from Hill of Tillymorgan. ( not counting the ones that I know of on Kerloch and the Bervie area )
It brought to mind the Eco-warriors braying a few days ago how wind provided Scotlands energy for 3 consecutive days. I'm minded to ask - what about the other 362 days of the year ?
I'm still hanging on to my Primus stove and Tilley lamp just in case - assuming I can still get paraffin & meths when the fans stop turning !
We wandered around the slate quarries, marvelling at the hardy cheils that howked the slate out of these holes in the ground and loaded them on to horses & cairts to be transported to the nearest port or railhead. For a long time I'd thought for some reason that they were Tin mines. Thank goodness for wiki. 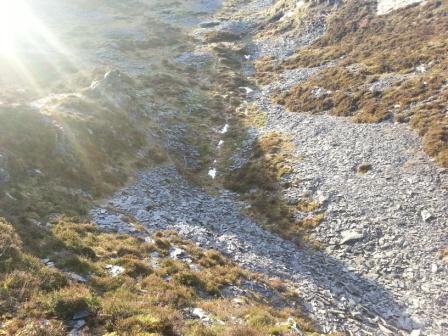 Looking into the slate pit on Tillymorgan 
We returned via Fan No2 and back down to the farm. The track was a bit mucky, so Harvey's self -cleaning efforts at the top pond were wasted and I had to douse him down again before letting him in the hoose. At this point I noticed that I'd dropped Harvey's lead, so had to fish in my bag for spare laces to improvise a dog lead. Fortunately, they were boot laces so they did the trick for walking along the road..
What a fantastic day weatherwise - it was like summer ! ( in the highlands)