Winging it in the Ochills

Winging it in the Ochills


The forecast was not good for Sunday in east or west so I couldn't be bothered with a long drive for nae views so opted for something lower and closer to home. I'd had an expedition to the Ochills last year (for similar reasons

) and was keen to explore them more.

It was a nice easy drive to Dollar and I managed to make my way up amazingly steep narrow streets to the car park at Dollar Glen. It was definitely a day for waterproof socks, especially as my boots were already fairly damp from the day before

I headed down the steep path into Dollar Glen and made my way along. Although there was no snow, some of the wooden bridge structures were pretty icy and I had to be careful not to end on my backside before leaving the bottom

But it was very pretty and I was glad to be out. If wasn't even raining!! 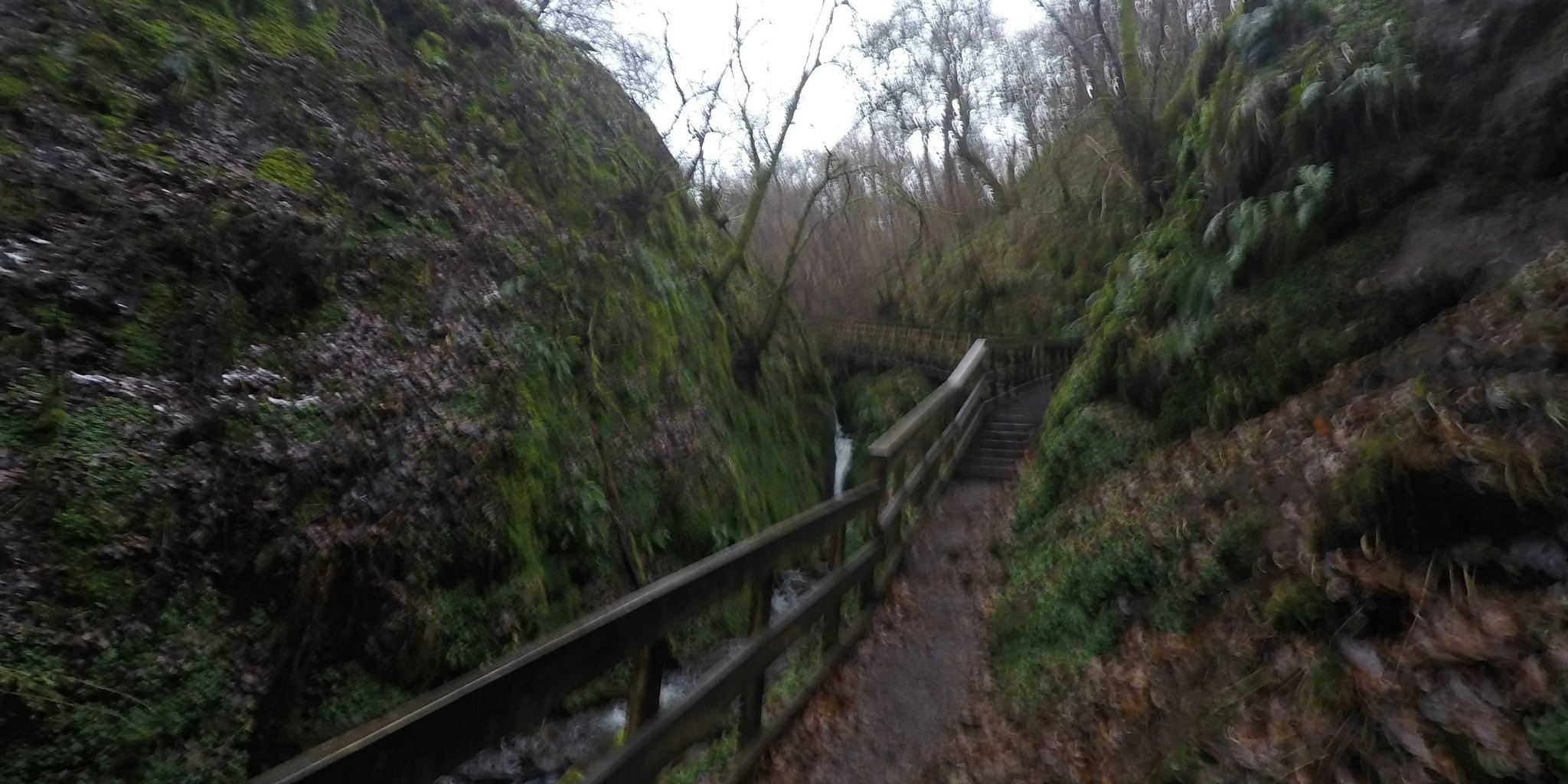 Climbing out the top of the Glen I arrived at Castle Campbell, a historic Scotland and National Trust property. I was annoyed at leaving my membership card in the car as it'd be nice to have a look....but I didn't really fancy going back...

After the steep climb out of the Glen it was easier walking for a bit as I made it out onto the hill. The route to King's Seat Hill, my only planned target, was simple.

Looking back to Dollar 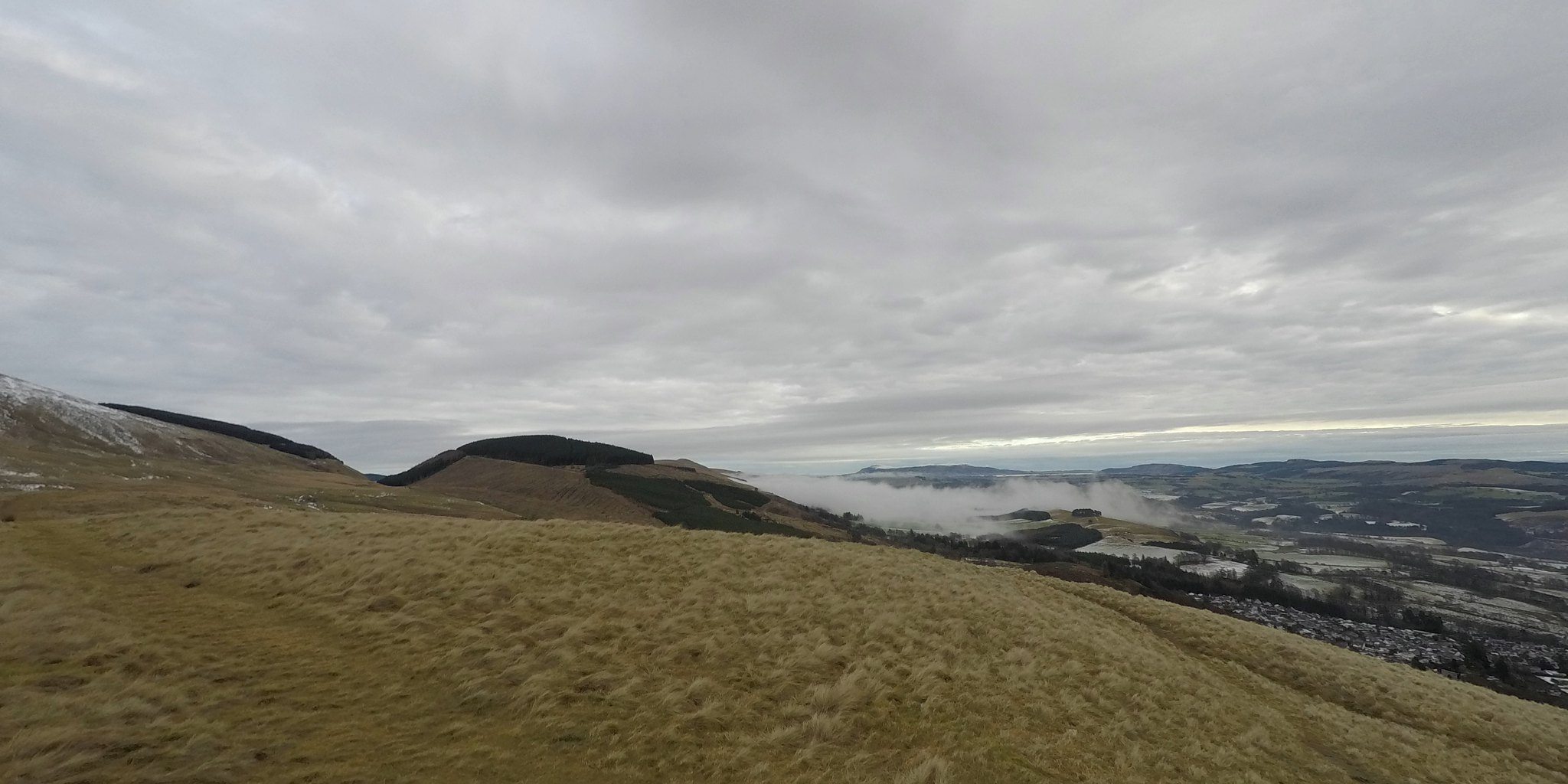 Ahead to King’s Seat Hill 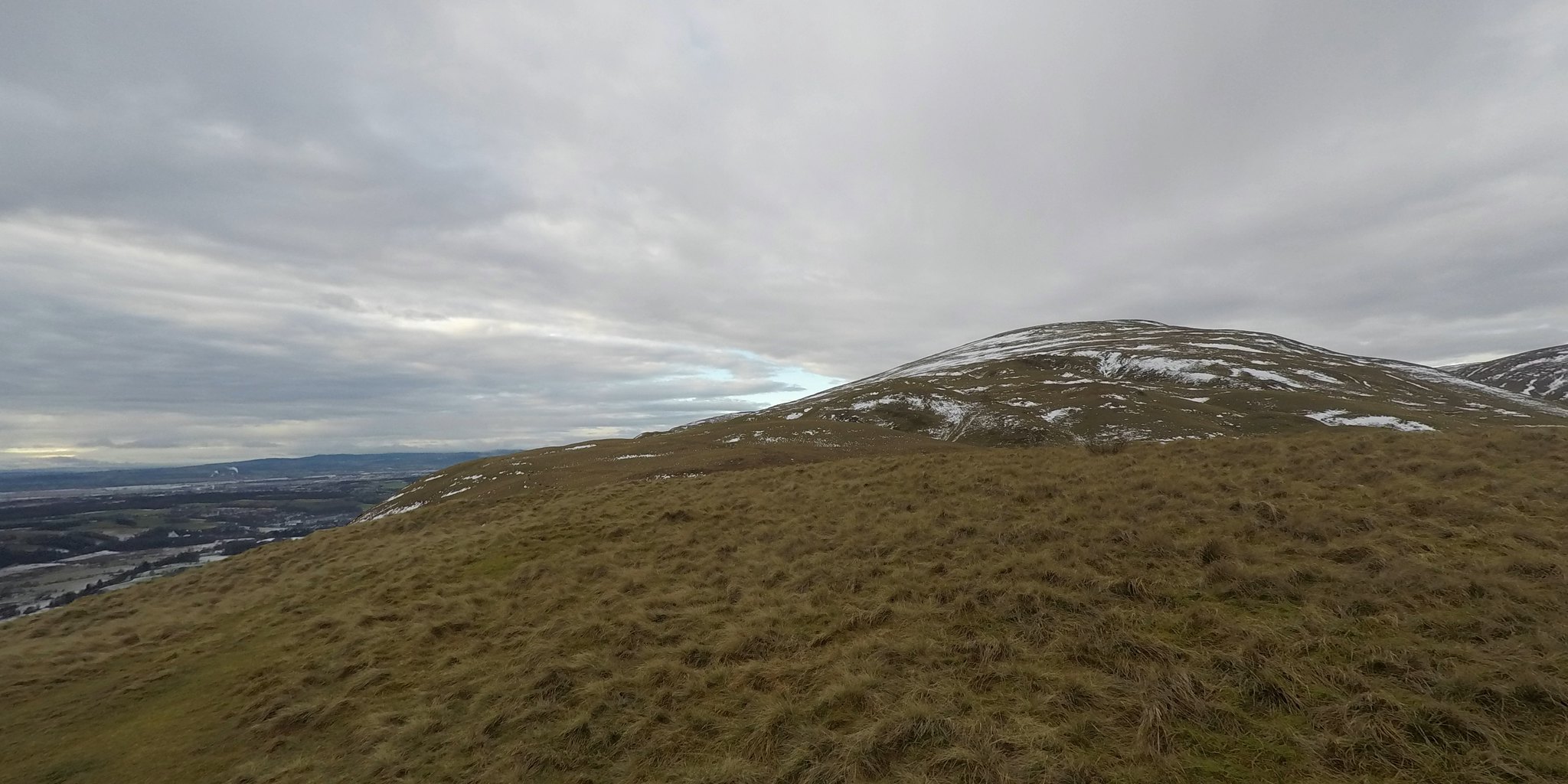 Bridges and things puffing out smoke 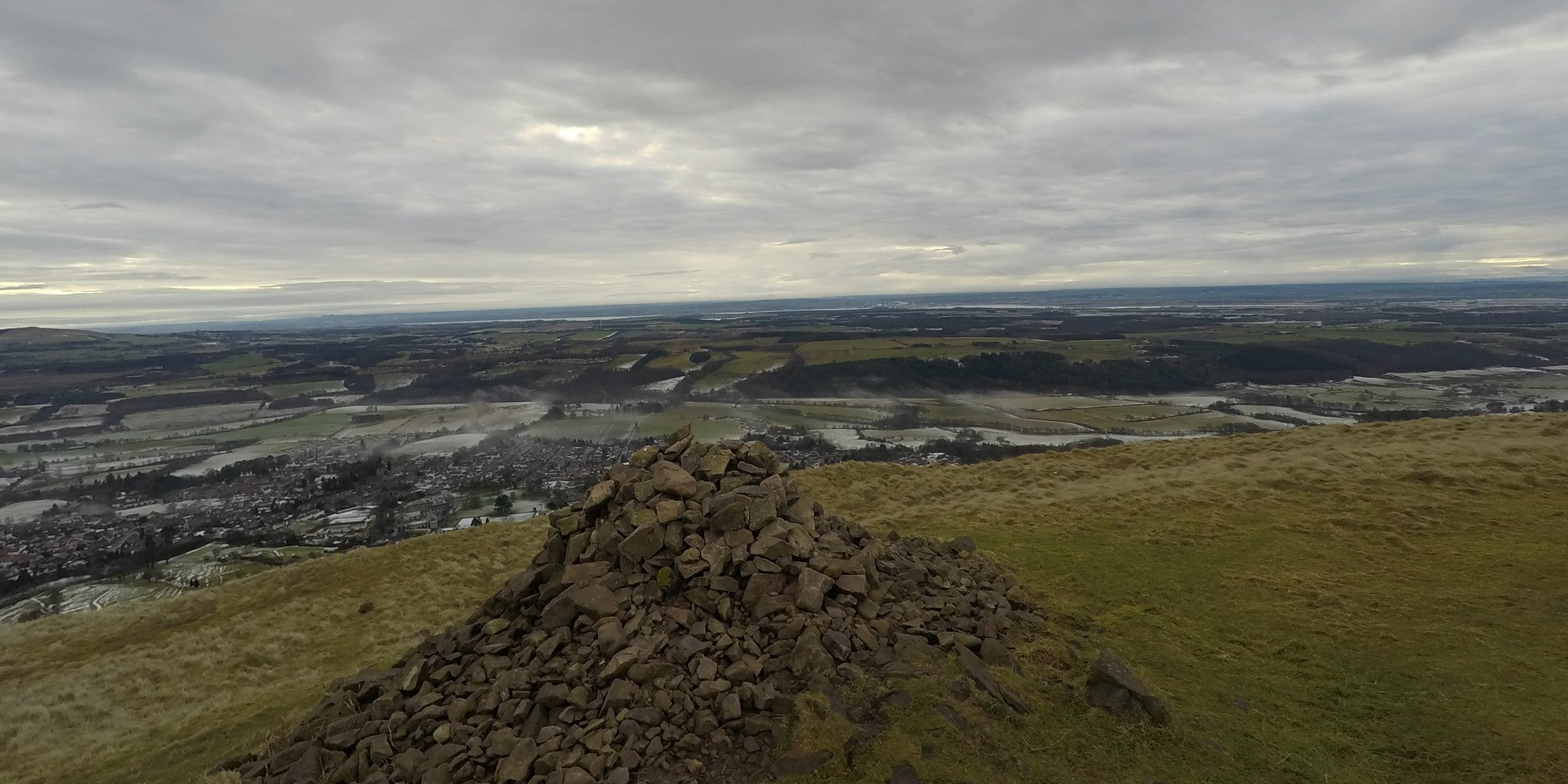 ) before sloshing my way through bog. There were several other people out - a couple had coats on their dogs

The watchers on the wall… 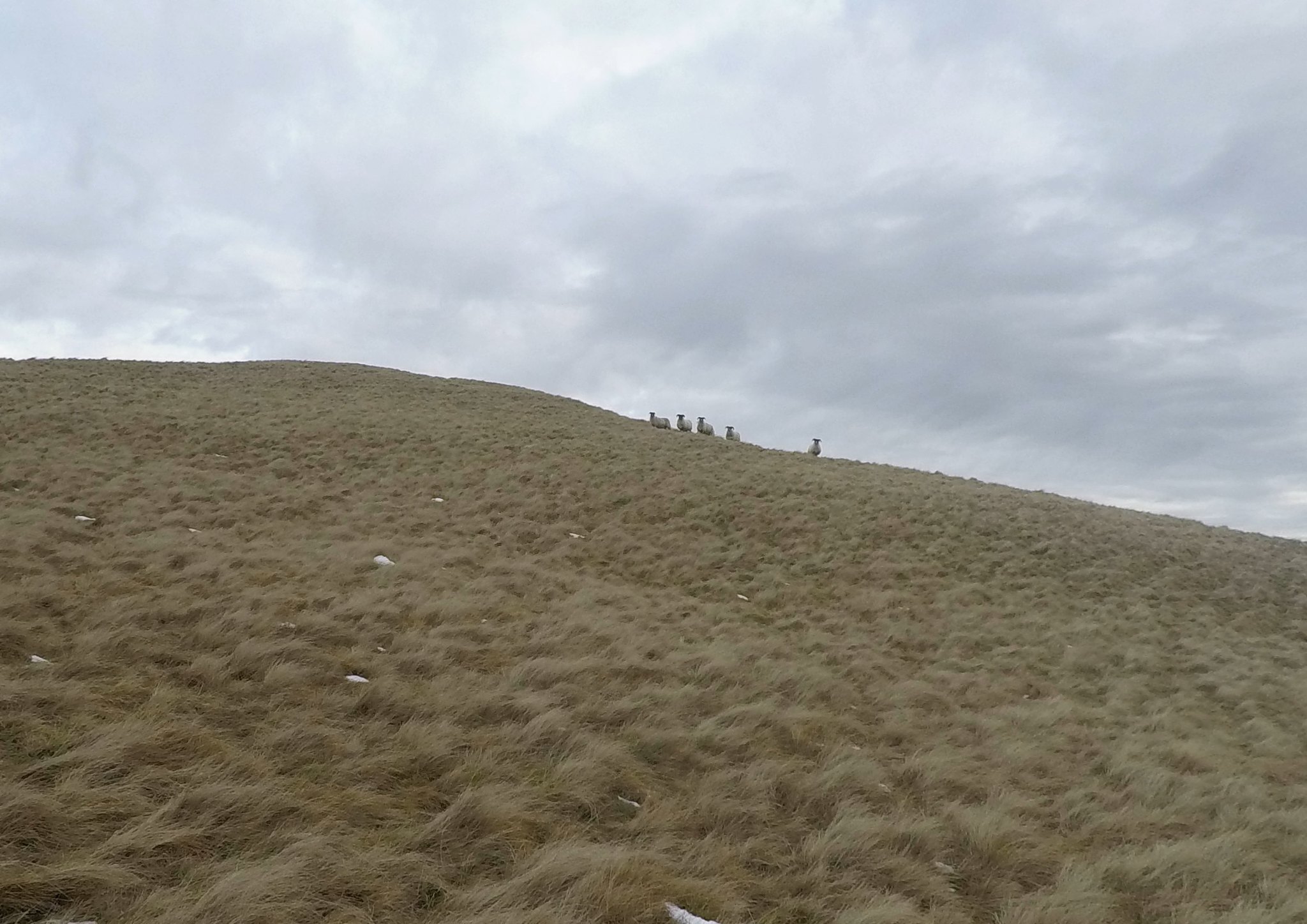 just before the steep climb to the summit. There was enough snow here to make it exciting, although there was practically nothing anywhere else. Reaching the top I was greeted with views of Ben Cleuch and the Ochill massif, as well as my potential next target and in the other direction Fife's many iconic bridges. 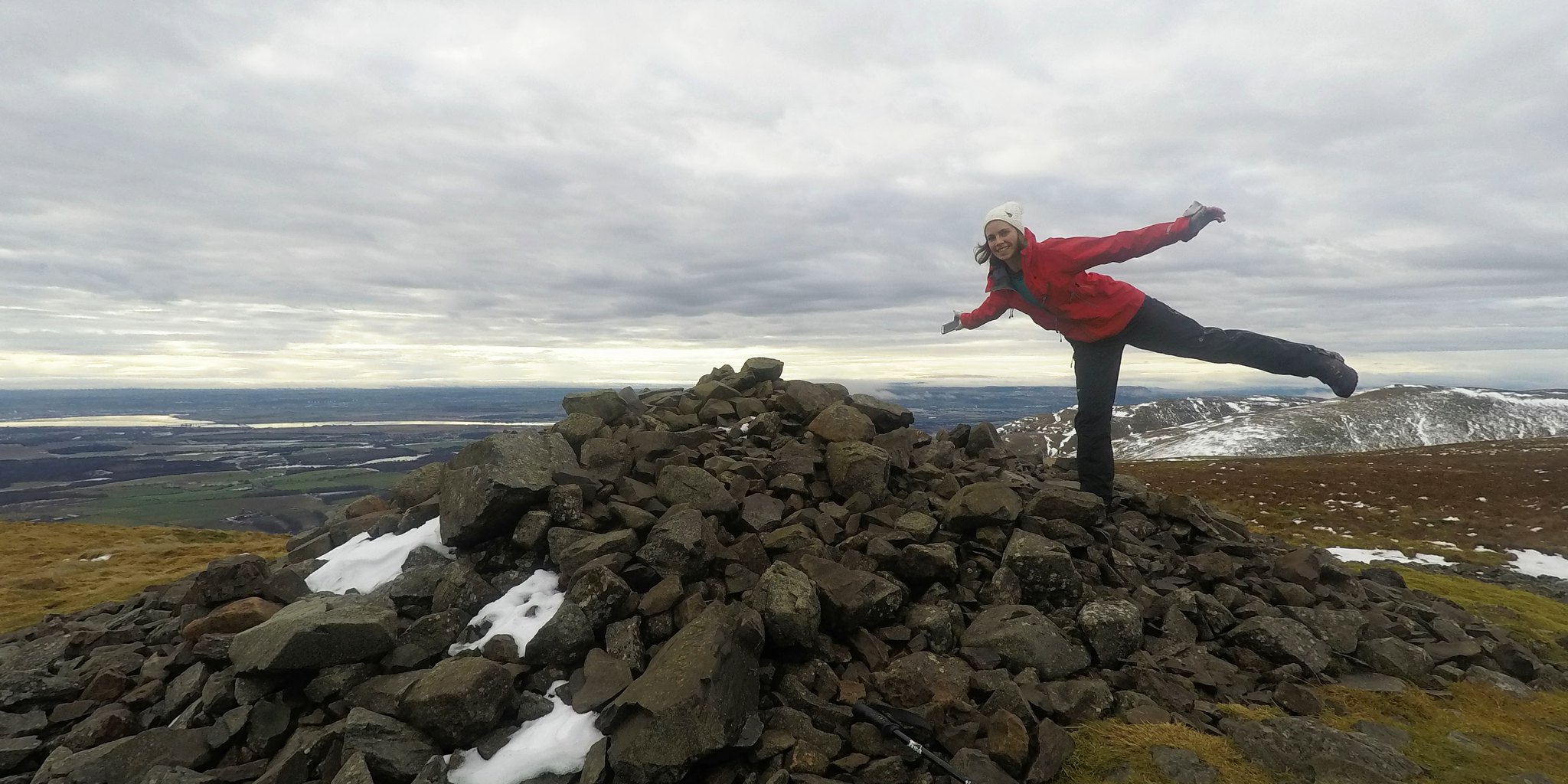 A very poor photo of the Ochill Massif 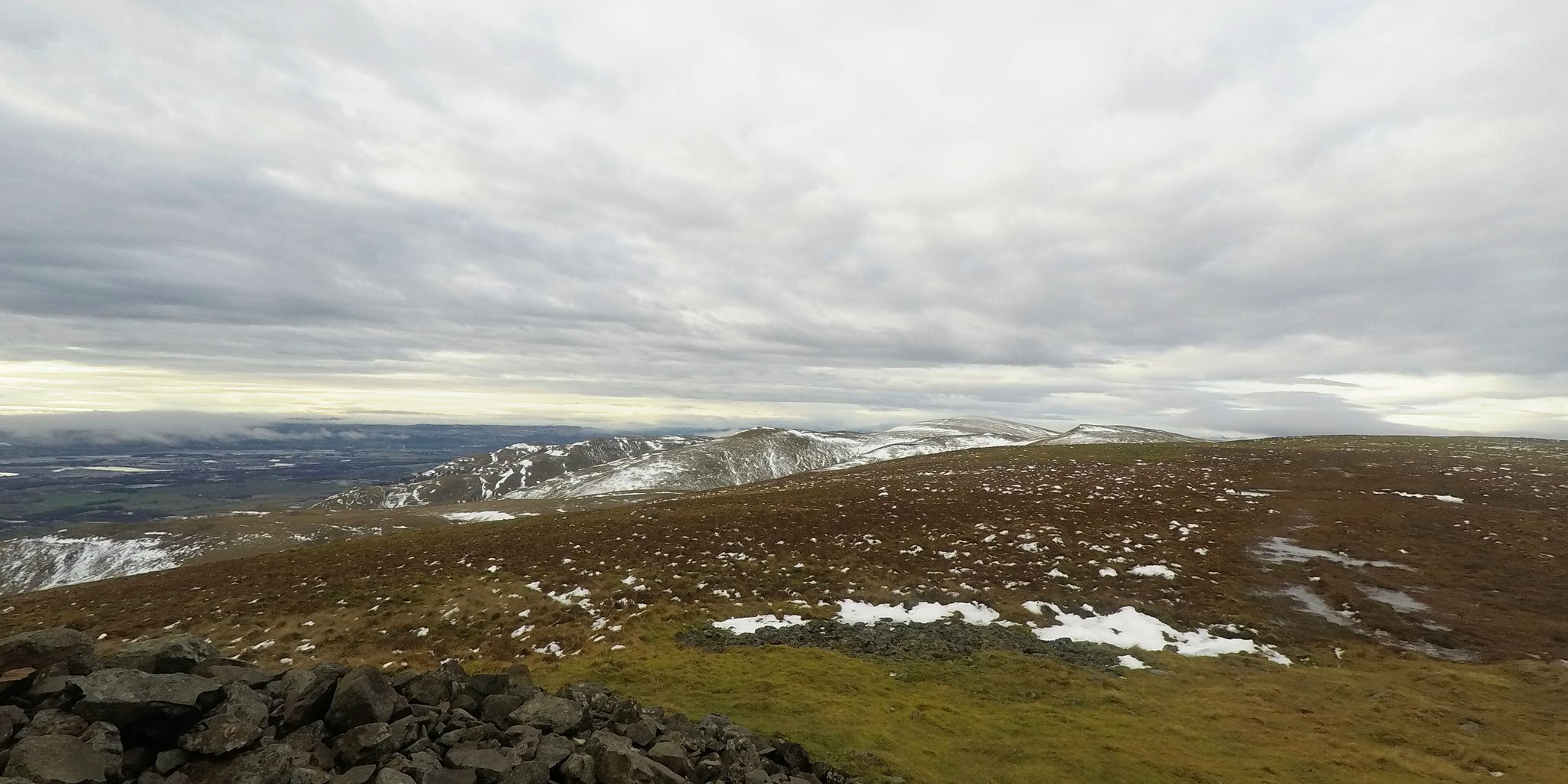 My plan so far had been to wing it....which is what I did. Studying the map it looked like I could get to Tarmangie Hill easily enough and follow the ridge down and back to Dollar. Weather was nice (the rain had lasted all of five minutes ) and my knee felt good. If was time for a bigger test 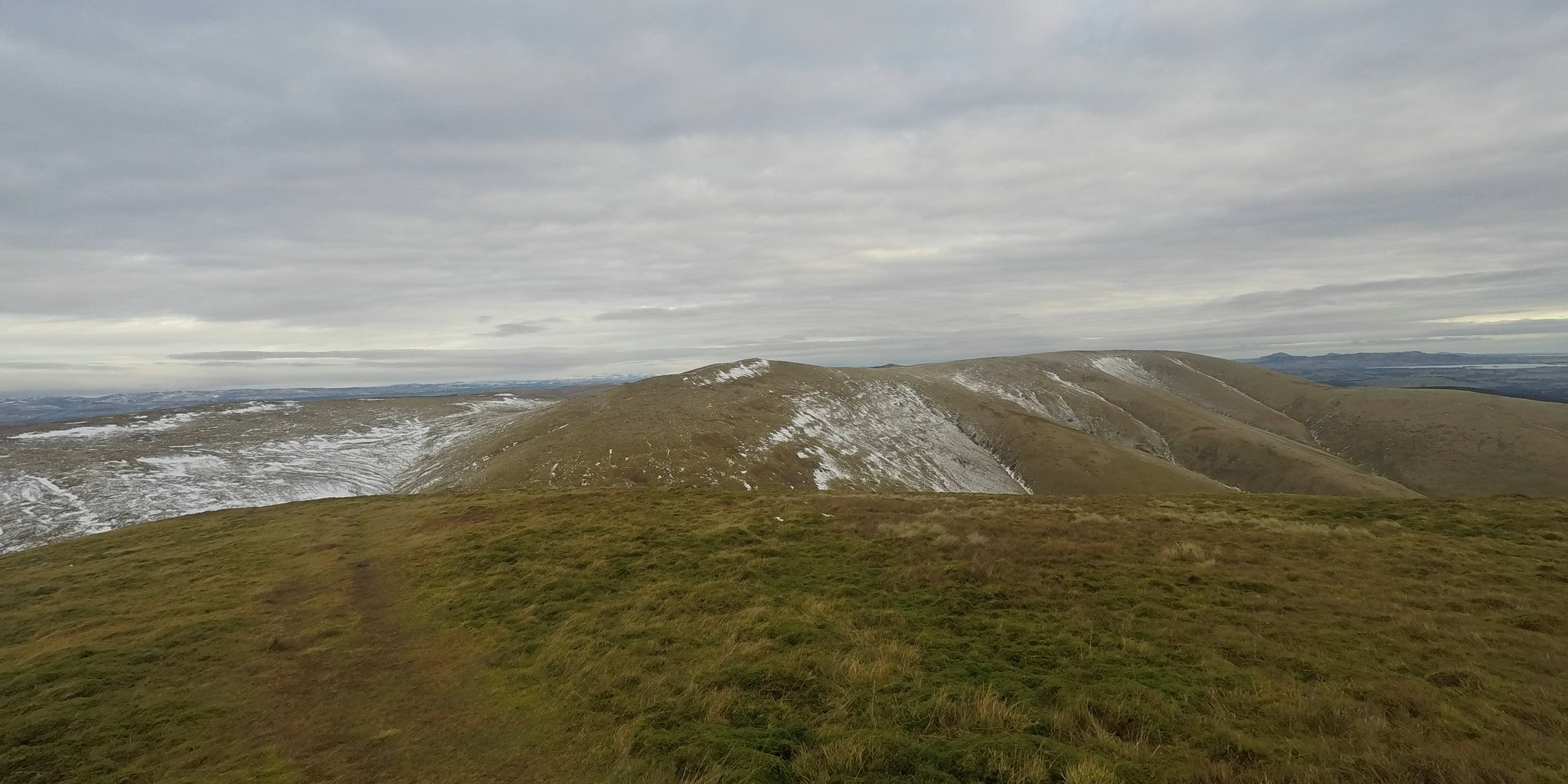 something I should know?!) where I met some people who seemed to be doing my route in reverse. Relieved that it was a thing, I continued up the shoulder of Tarmangie Hill (much less steep than the descent!!) and was soon on the ridge, following wall and fenceposts to the summit.

It was quite windy… 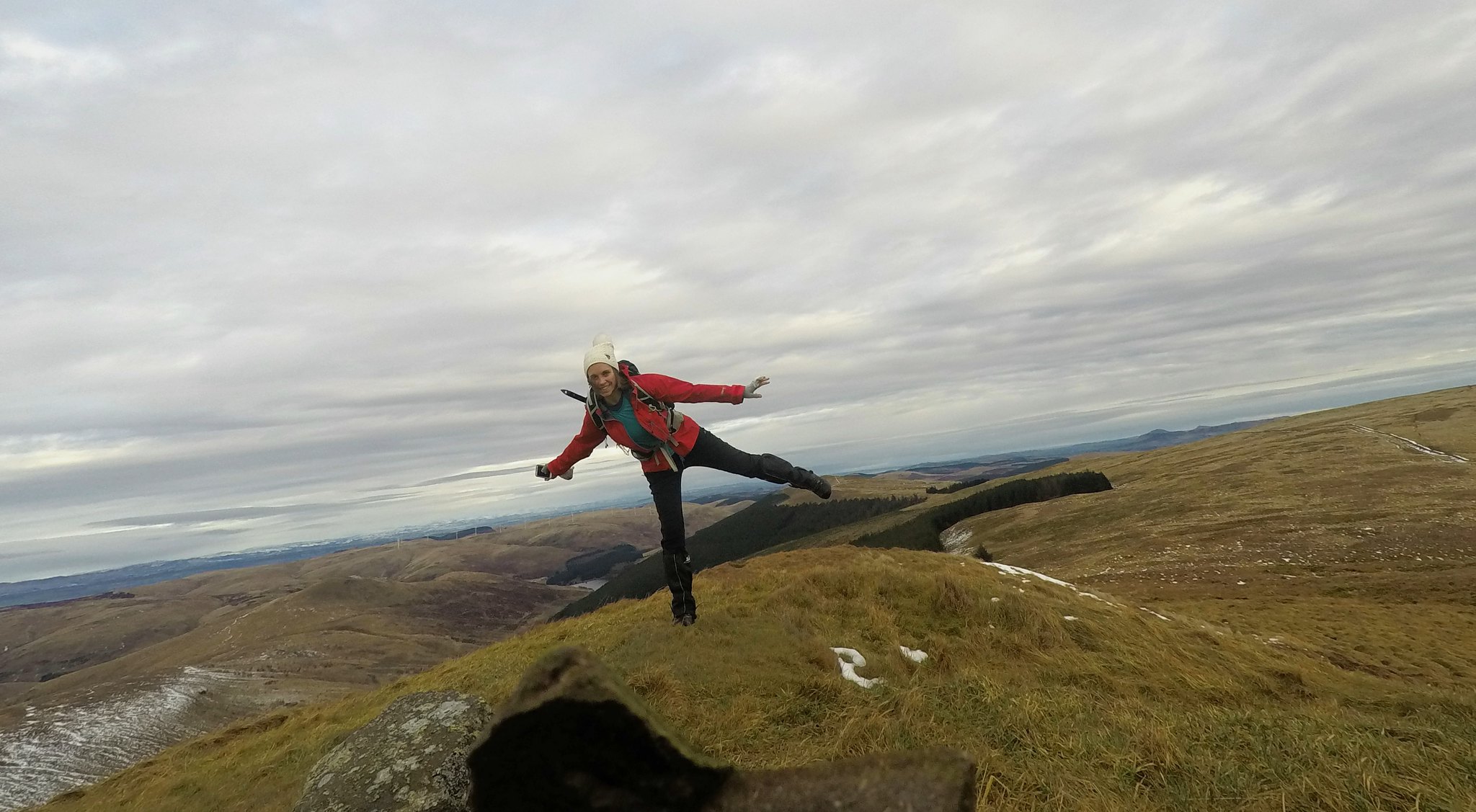 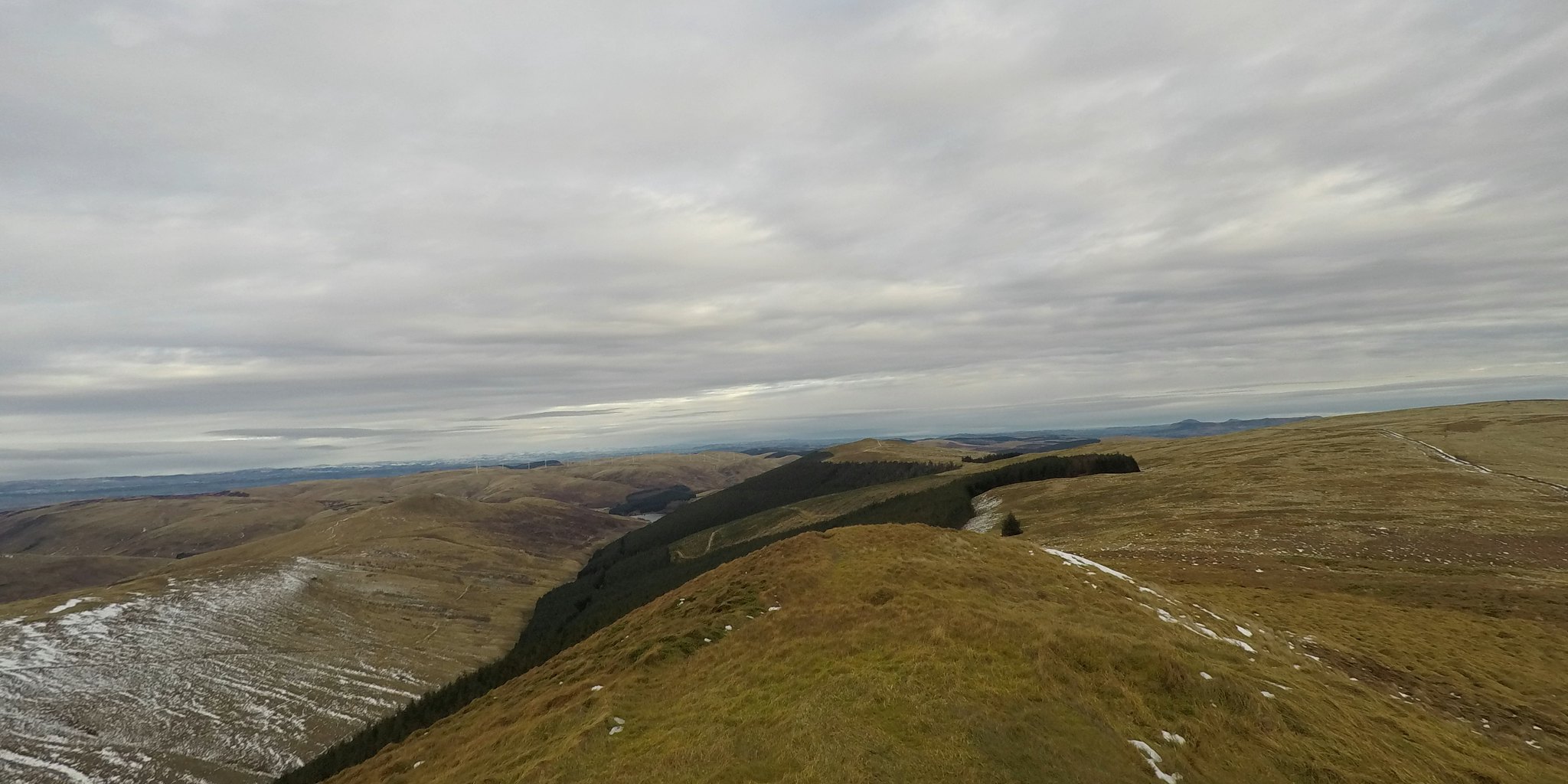 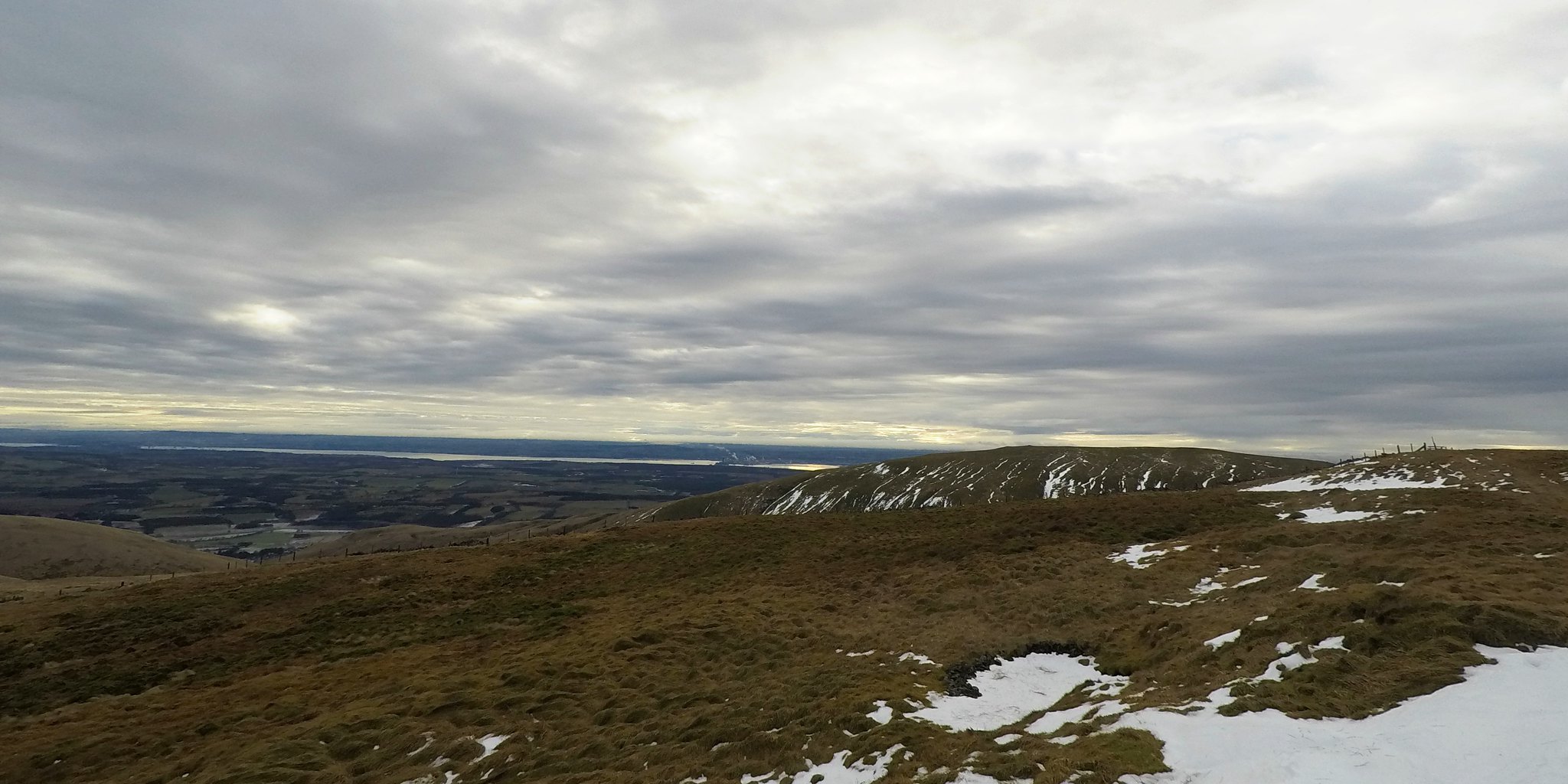 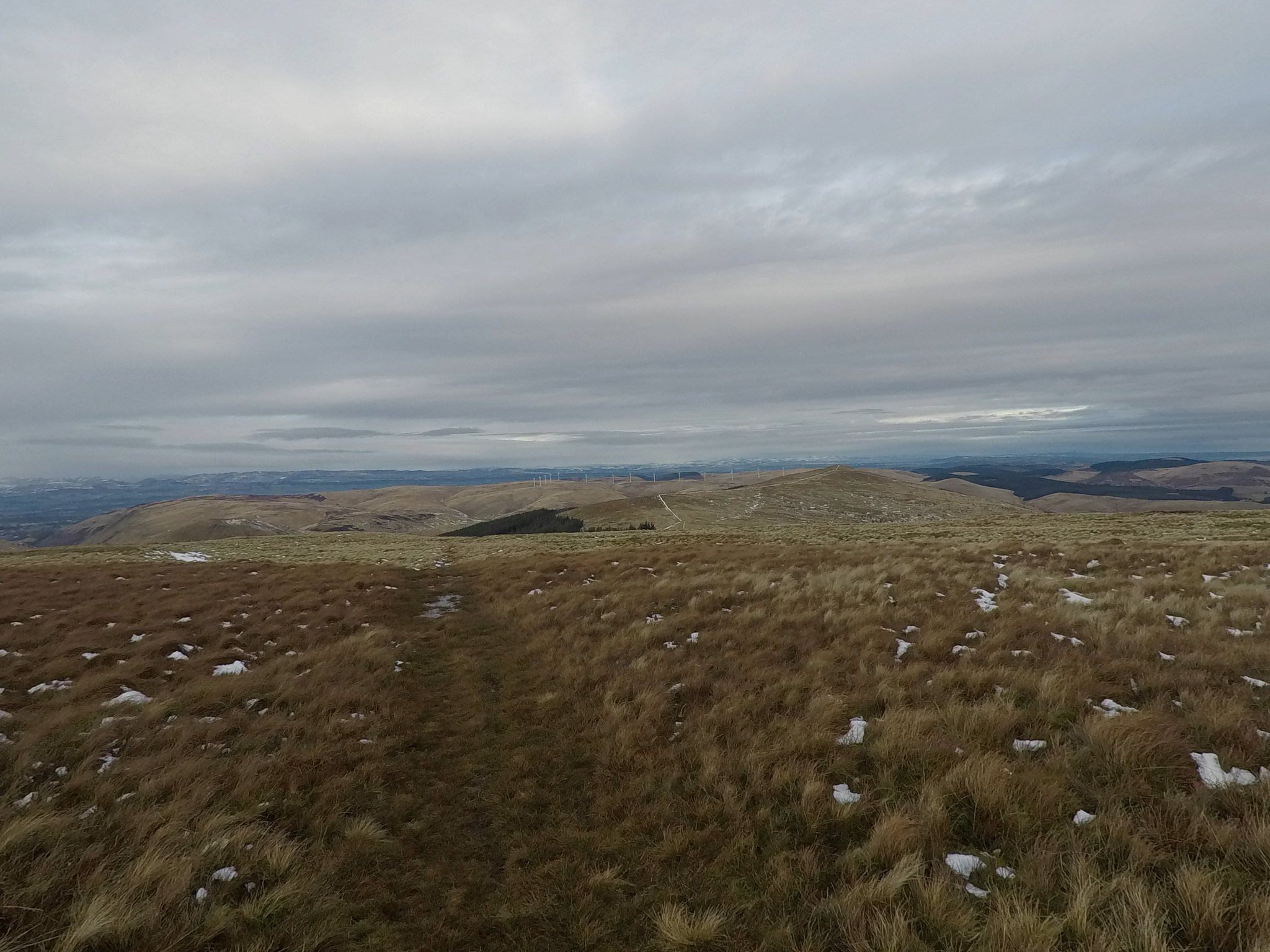 From here I could follow the ridge to Whitewisp Hill and down. But according to the map I could also go out to Innerdownie and descend to the reservoir... deciding to walk to Whitewisp and decide, off I went. I bumped into a guy out running here, trying to get fit. If he was running around the Ochills he'd already managed that

we parted ways and it was a quick march to Whitewisp Hill. From here Innerdownie looked a fair distance but not a difficult walk....why not?! 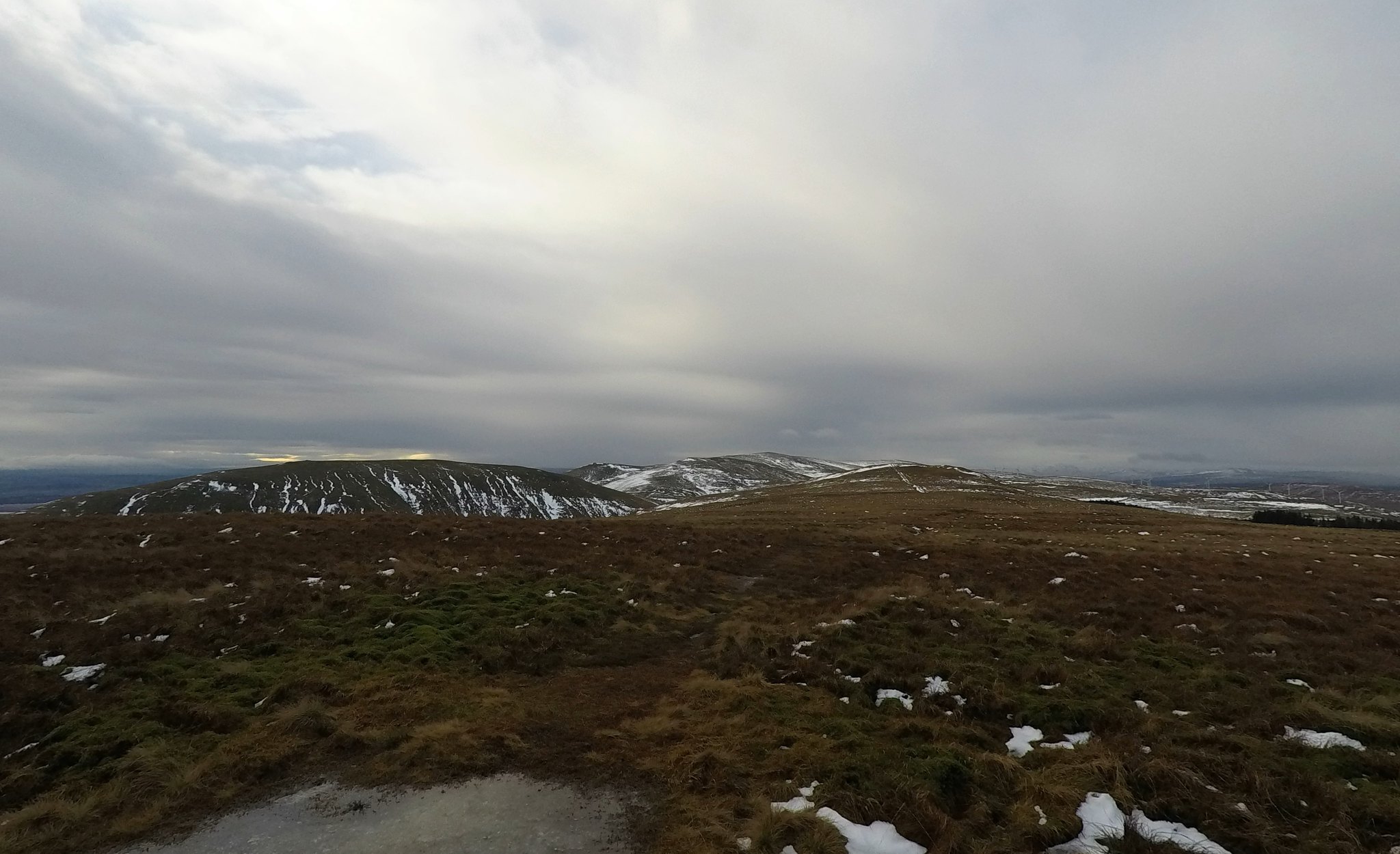 Off I went, sloshing through more bog and over a giant stile. The path was obvious alongside the wall and the views were great, although I could see clag topping the higher hills in the distance. If seemed I had made a good choice today! 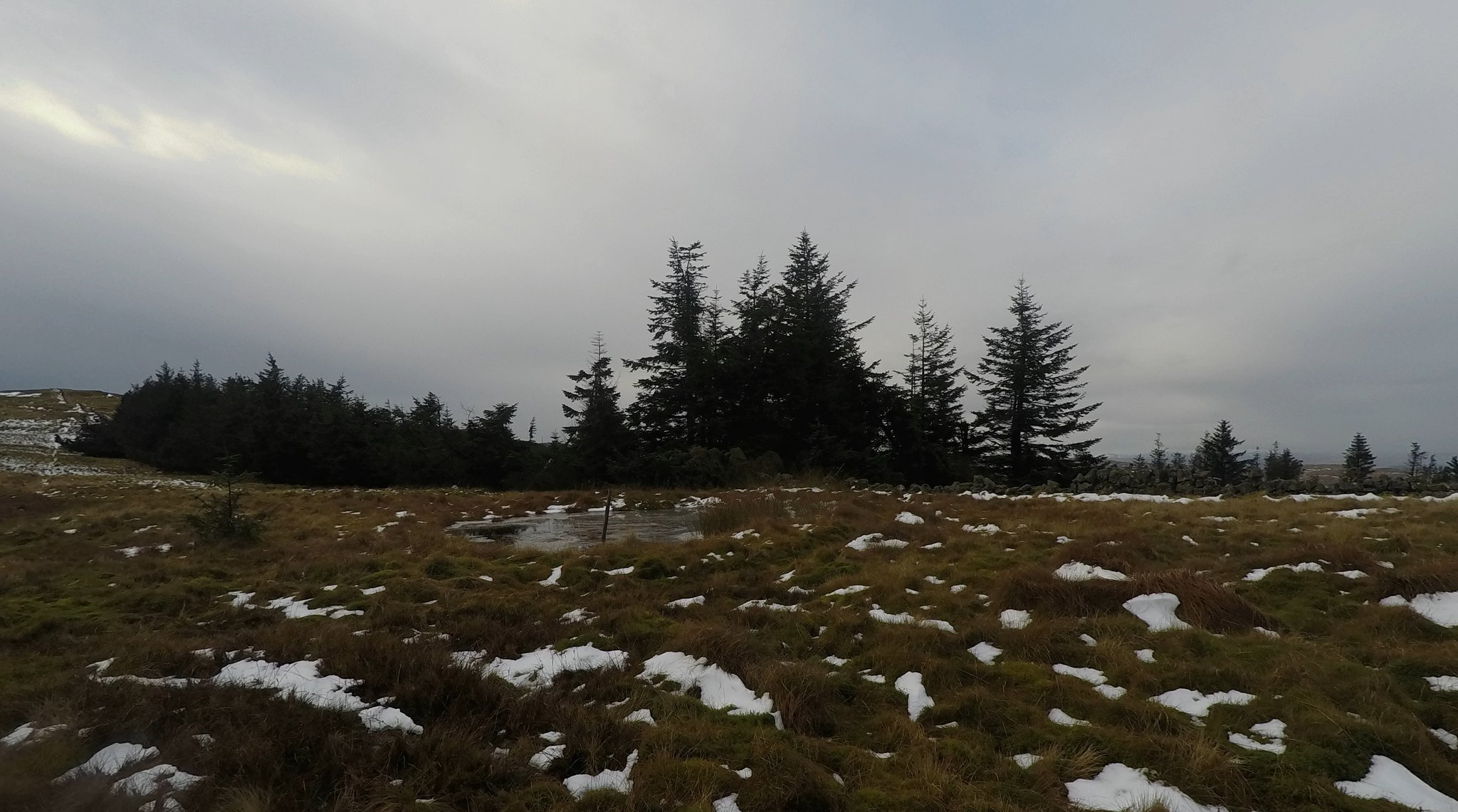 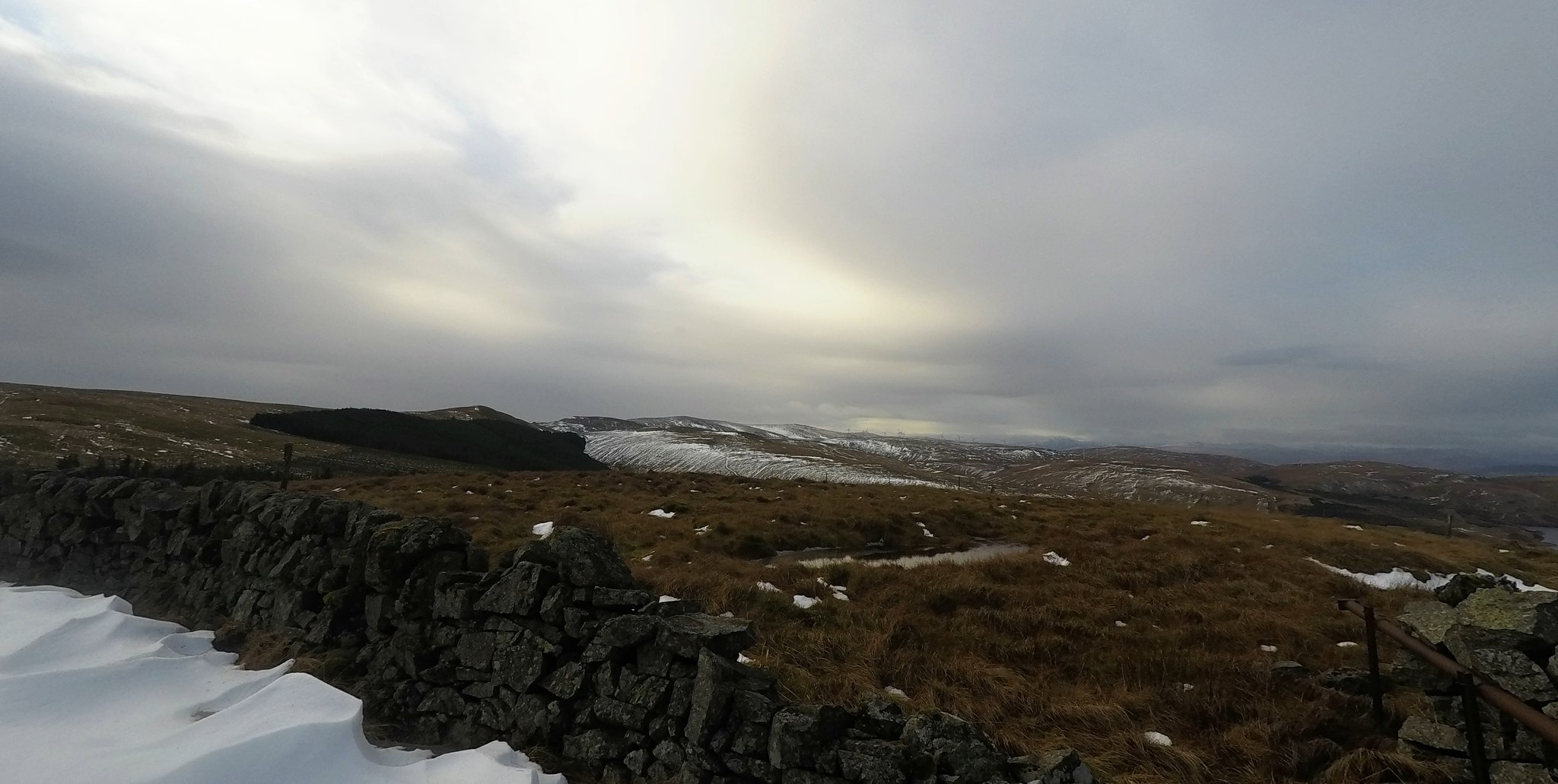 Finally reaching Innerdownie it was sandwich time. A quick lunch stop as it was pretty windy! 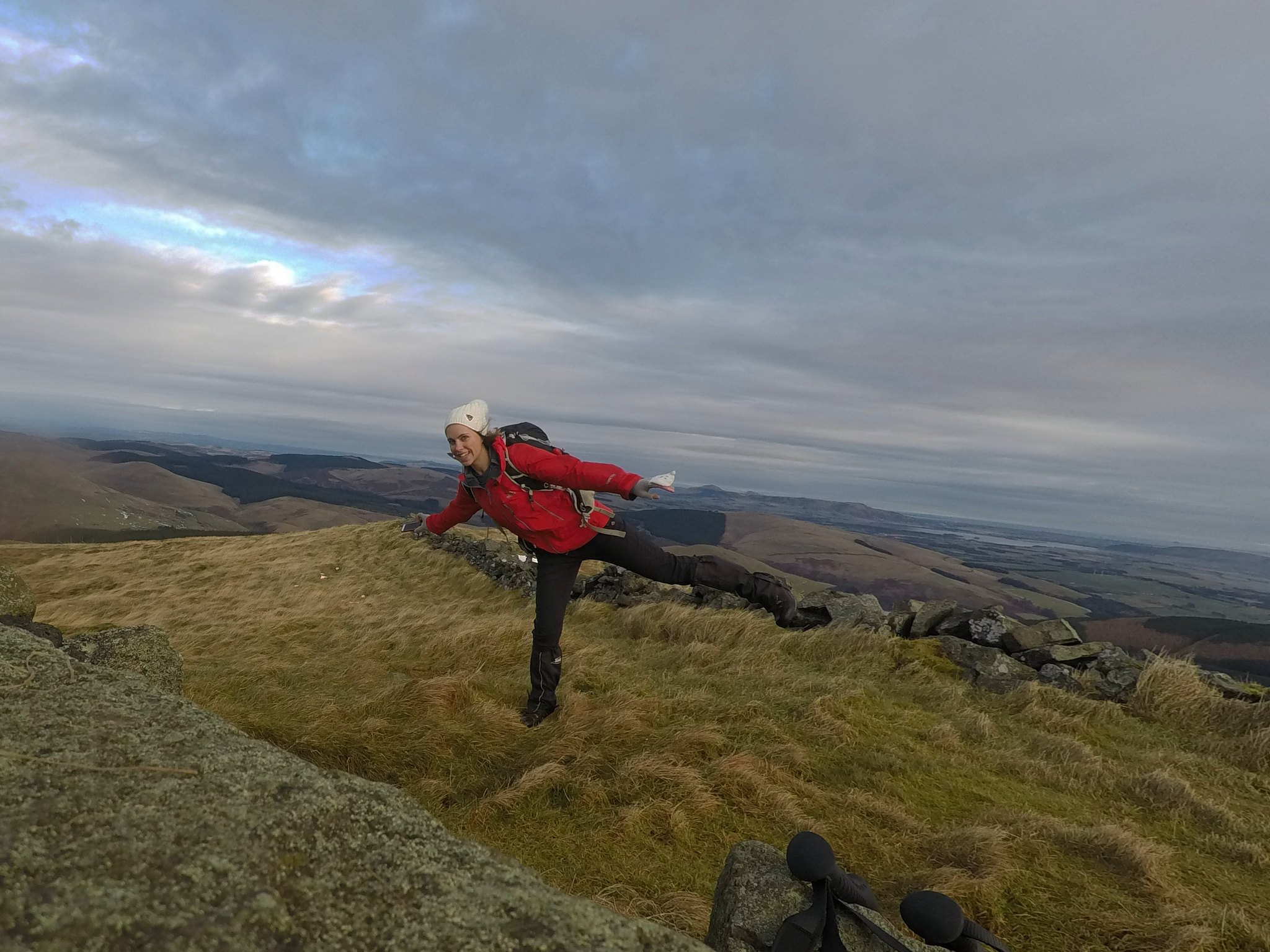 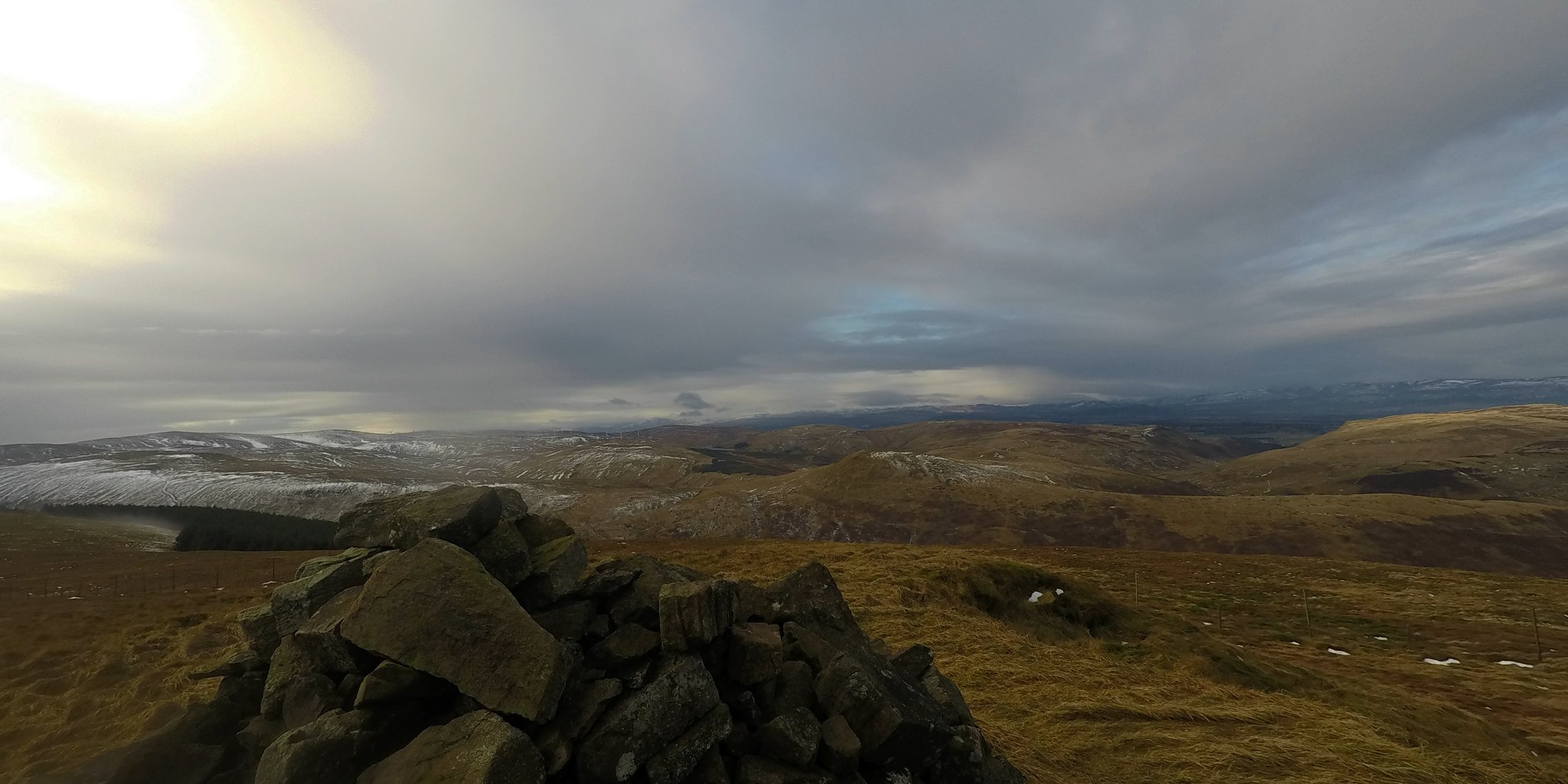 Glenquey Reservoir, my next target 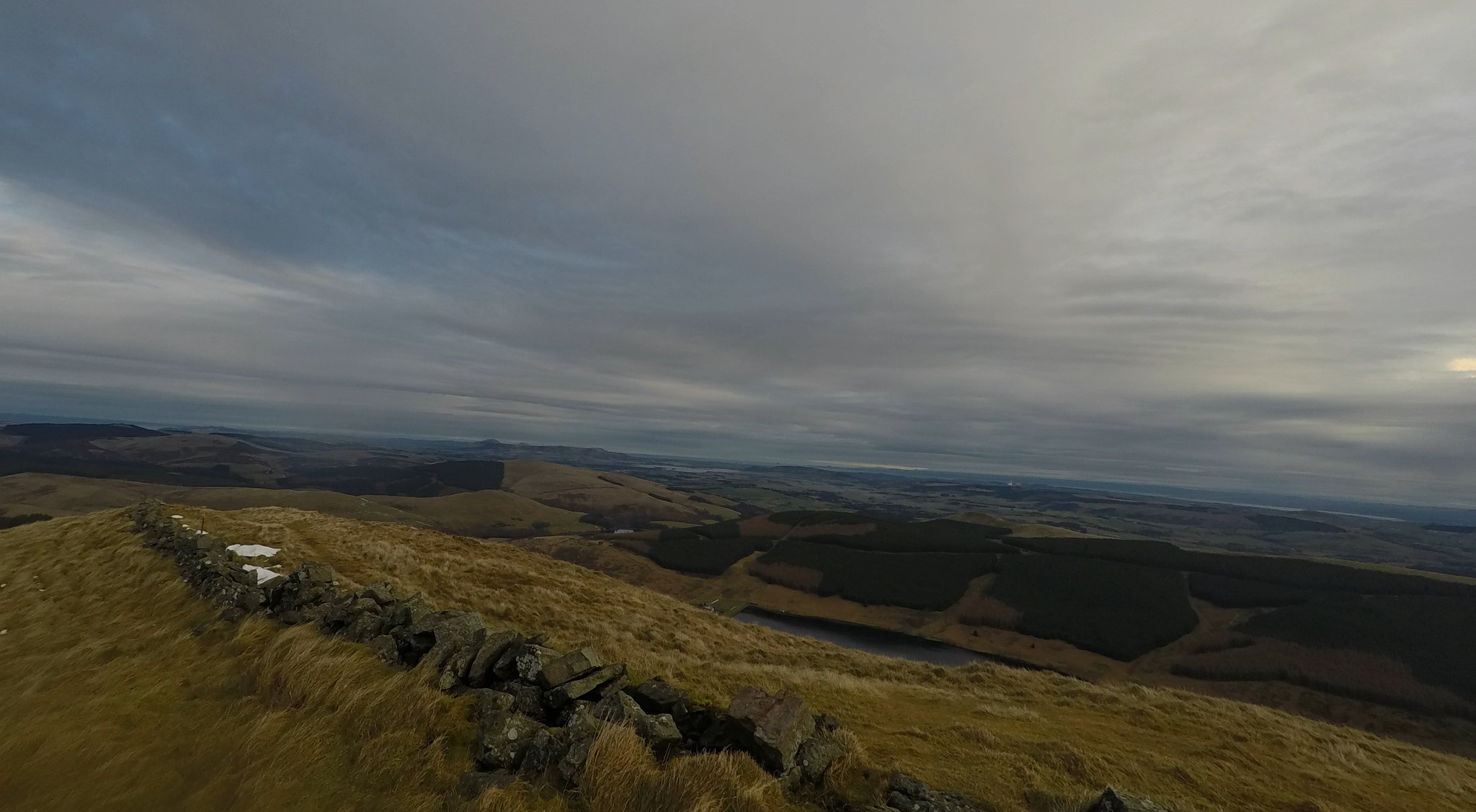 The route down was simple, I followed a path which branched off from the outward route and led downwards to the reservoir. After a wee bit of off-roading to cut off a corner I reached the track. 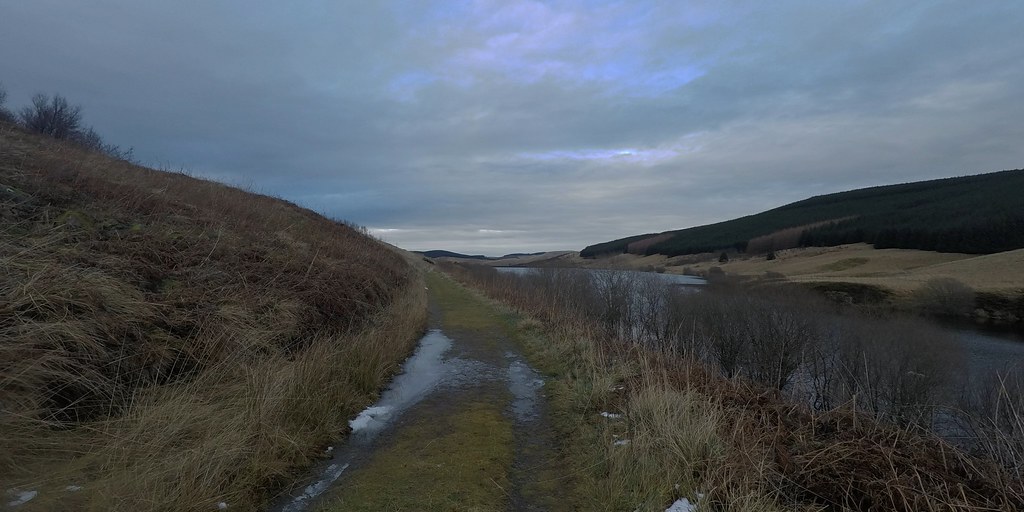 From here it was just a long walk back to Dollar. Although as it had turned into a beautiful day this was no chore. 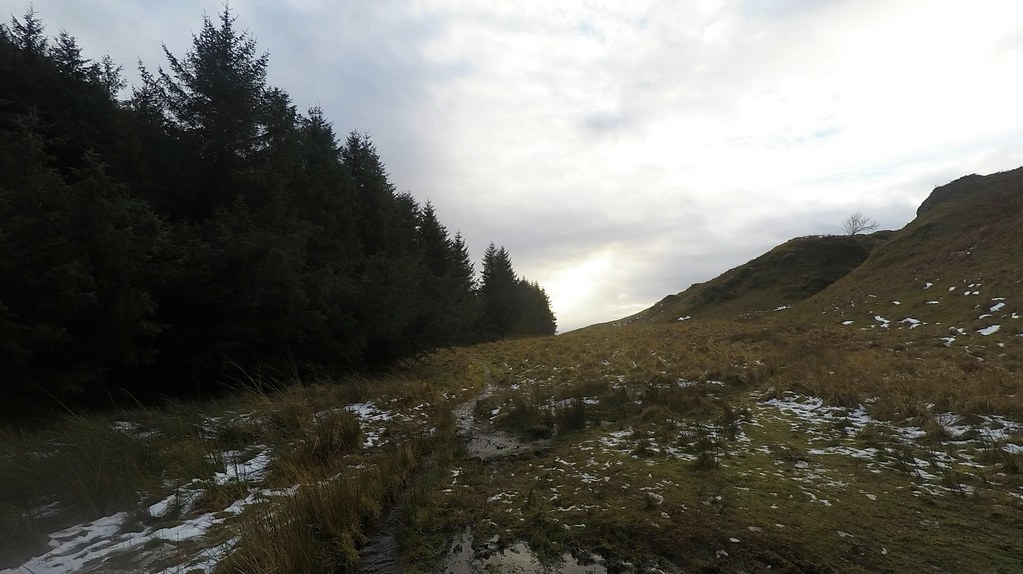 What would have been my route down 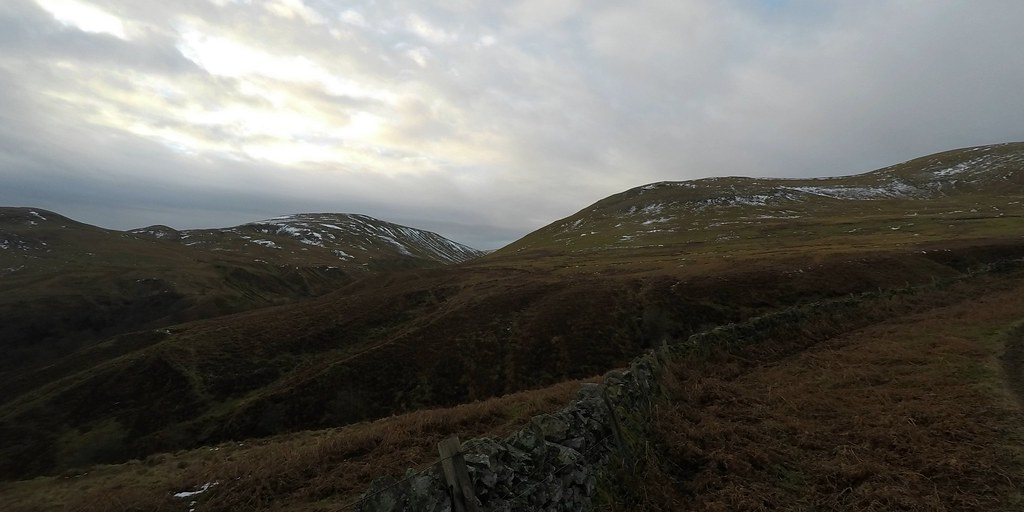 I arrived back into civilisation near the castle - lots of people 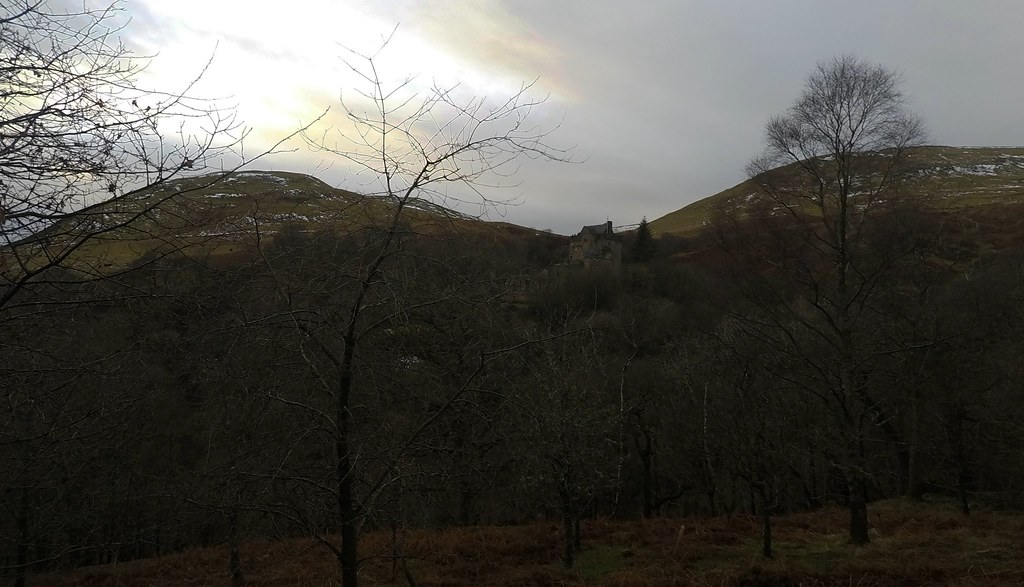 An easy stroll back down the road to the car and a relatively short and easy drive home. Knee felt good, I felt good. Donalds are great

Nice one Jackie, did I spy your ice axe attached to your rucksack?

I think your route is very similar to the one I used, the views to the north and south are worth the effort

That looks like a nice wee round - thank for posting!

Fife Flyer wrote:Nice one Jackie, did I spy your ice axe attached to your rucksack?

I think your route is very similar to the one I used, the views to the north and south are worth the effort

Yes - I think the ice axe was overkill

but i felt kind of undressed without it so it came along for the ride. Left the crampons behind though

Great wee hills eh, you can just keep walking and never end up too far from where you started

jmarkb wrote:That looks like a nice wee round - thank for posting!

It turned out quite well in the end, I like days where you can make it up as you go along

Hi Jax - I live on the steep road up to the Dollar Glen car park - you could have dropped in for a cuppa!

The Ochils are wonderful little hills - dramatic ravines, but nice easy walking (and obviously very accessible for me!)

Winter skills refresher from Glenmore lodge this weekend for me!

Knuckledragger wrote:Hi Jax - I live on the steep road up to the Dollar Glen car park - you could have dropped in for a cuppa!

The Ochils are wonderful little hills - dramatic ravines, but nice easy walking (and obviously very accessible for me!)

Winter skills refresher from Glenmore lodge this weekend for me!

Aww no way!! Next time I'll give you a shout!! They are great wee hills tho, lucky you having them right on your doorstep

That depends on the kind of dog and some other factors.

We took in a dog which originally came from an animal asylum in southern Italy, she has nearly no dense fur coat, so it is sometimes necessary to get a coat on her if it is very cold and if we are out for longer walks.

Another possibility: Some kinds of dogs, like Cocker spaniels for example tend to collect snowballs with their fur coat. Then it can be easier to wrap them tightly in some overalls ,too.
Just search for "snow cocker spaniel" on google and you will see some examples.

I love a day out in the Ochils. That looks like a nice route for next time, thanks for posting.