Another beautiful day - too good to waste. GordonC felt the same so we picked up Harvey and headed for Strichen.
Phaffed around Strichen for a wee bit until GordonC found Hospital Road.

Nosed our way up to Bransfarm, which appeared to be unoccupied. Enough room to park on the grass adjacent to a run-down Nissen hut. 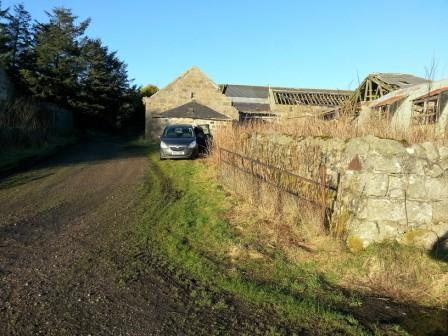 Took the track west to it's end and through a kissing gate. The gate in the next field was open with no livestock in sight. so we followed a track up the middle of the field until about the centre, where it petered out, with no apparent exit to the white horse through the thick gorse. The open gate not to go through The White Horse from below We headed to the left edge of the field where we found another kissing gate, so heaved Harvey over and made it through ourselves to gain a squelchy path which soon opened out. The gorse below the horse had been on fire recently, so a fair area had been scorched. The path leads to the horse's head then up to the track that runs along the south side of the Waughton Hill towards Mormond hill from Newseat. Looking down on the White Horse

This track was followed for a few metres until a track spurred off up to the Hunters Lodge. The views from here were great. There was hardly a movement from the plethora of fans visible - so no eco-kettles boiling today ! We headed over to the top of Waughton Hill - tripping over the old fence wiring lurking on the ground to catch out old buddies like me. No cairn on the top, but a few posts sticking up close to where the GPS reckoned the spot height was. We wandered around for a bit, soaking in the views then headed off to the track across to Mormond Hill via the Hunters Lodge. The track was pretty muddy, so just after the bull corral, we headed across to a grassy ascent of the Mormond Hill ridge by a stone that looked from a distance like one of the Balmoral obelisks. Warning by the track on the way to Mormond Hill - nae bulls though ! The obelisk stane on Mormond Hill

At the top, a gate in the outer perimeter fence of the comms compound was locked. so we wandered round to the main access gate to find it also locked. The views to the Broch & PhD were fantastic.
We had another guessing game at the hills we could see. At the main gate to the comms compound on Mormond As we headed off back towards the Hunters Lodge we saw a muckle flock o sheep which seemed to have appeared from nowhere - between us and the track -grazing away. So we elected to follow the fence line towards Waughton Hill until we got round the back of them. This plan seemed ok until the sheep spotted us as we cut over to the track.
At first they just looked, then started walking, then trotting towards us. I presume they thought we had some feed for them, so I hurriedly got Harvey on the lead and briskly walked to the track, splashing through a muddy burn on the way. At this point the sheep seemed to lose interest and reverted to grazing. Crisis averted.
We tramped back to the White horse and headed back down the path to the car. Harvey on the way down above the White horse

However eagle-eyed GordonC had spotted a building on the way up the path, not far from the kissing gate and decided to investigate as we descended. His historical interest was rewarded, when we found this concrete blockhouse - style building with squashed shotgun catridges scattered all over the floor. When we went inside, we found a long building extension running off this blockhouse with a strange steel mechanism at the front. Almost immediately, GordonC identified it as range targets and connected it to the Nissen hut where we'd parked, which seemed a brilliant piece of sleuthing. The range target mechanism below the White Horse

A fascinating surprise "find".
I picked up Harveys functional sacrifice for depositing in a doggy bin, but before we'd driven a few yards down the road , we had the windows open again and were gasping for odourless air. Fortunately GordonC spotted one just as we hit Strichen, so we didn't have to break out the gas masks !

We headed home via Old Deer, as I wanted to have a quick look at the old Kirk there, where my Great,Great,Great Grandfather was the kirk sexton - ( B1802 - D 1873 ). Wandered about the cemetry for a wee while then headed home to drop off GordonC, sluice down Harvey & head over to Culter for tea.
Anither fantastic day !