No matter how hard you work in the gym during these dark winter months, you never know if it's been any use until you finally get out into the hills. We all know, being "hill fit" is very different. Impressive cardio figures mean nothing when you're wearing heavy boots instead of trainers, and suffering with a day's worth of gear on your back dragging you down. That knackered feeling after a spin class that lasts just an hour doesn't quite pale into insignificance but, at the end of more than six hours on the hill, you know it takes something more: either that or I'm simply getting old.

So it was time to get out and see how things went; the New Year was a long time ago and I still hadn’t tackled a hill.

With Corbetts on the horizon for my winter targets, I pored over the guidebooks and maps after seeing what the weather promised for last Saturday. It had been seven weeks since I'd enjoyed late November's snowy delights above Glen Orchy and ...

... since then I'd acquired a new pair of boots and changed the car. The leather on the former now resembled blotting paper loosely stitched to smooth soles, while the latter decided to present me with some expensive repairs after a mere 171,000 miles: built-in obsolescence if you ask me, but then I am a Yorkshireman.

Creag MacRanaich and Meall an t Seallaidh above Lochearnhead would see if the former would inflict blisters and the two hour drive would see if a Passat Estate could replace the Laguna that had become like a well-worn pair of old slippers. "Yes," said the other half, "and you hang on to them for far too long as well."

It looked dreich and gloomy when I left the car - and the new novelty of heated seats - in the virtually empty car park on the northern side of the loch. However, I wasn't downhearted as I knew that conditions were just right for one of those days that you yearn for. The lane past the Episcopalian church in Lochearnhead

Lochearnhead was quiet and still. A grey mist hung above and the only colours that broke the monotone monotony were on the noticeboard of the Episcopalian church marking the way toward the old railway line and Glen Kendrum. The whirring whine of a chainsaw accompanied my ascent of the zig-zags upward, the only bit of effort required during the first hour of the day. 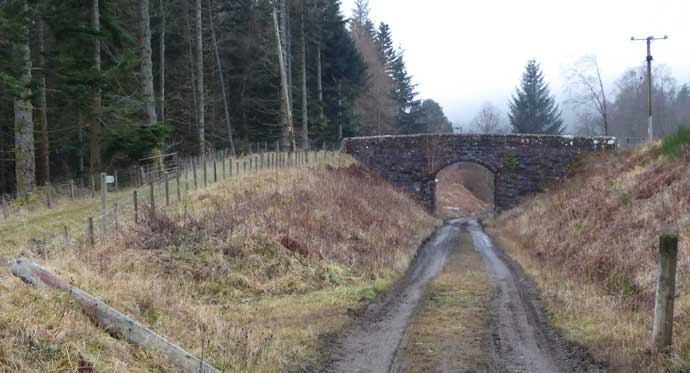 Leaving the old railway line behind

Construction work further up the Glen has meant that the track from Edinchip no longer resembles a rustic route that it may once have been. The gradient however is gentle. Distance and height were gained without too much effort, but enough to test the new Mammut Trovat Guides received for Christmas. A little loose on the heel maybe to begin with, but soon resolved by tightening the laces a tad more than I would normally have done with their now-retired predecessors. The gloom persists up Glen Kendrum

Once past a pallet of Blue Circle cement bags, an incongruously parked mini-digger and a curiously discarded satellite dish, the track reverted to its original state. More reassuringly, there was a hint of brightness above and soon the silhouette of a skyline could be made out. After little over an hour's walking I, like many others across Scotland that day, stepped above the clouds.

Sometimes you'd rather not see what lies ahead: the steep slopes, the interminable hillsides and yet more drudge. It's easier to simply put your head down and not let it depress you. But on days like this it lifts your spirits: exhilaration, inspiration, invigoration, call it what you will. Ben Vorlich and Stuc a Chroin burst through the inversion

The bulk of Creag MacRanaich now loomed above, apparently protected by a series of walls and cliffs through which you have to find a way. Call it impatience or over-eagerness, I headed into them far too soon. It was possible make out any number of possible routes up grassy rakes and little scrambles and, to be fair, the best way doesn't announce itself with anything obvious like a cairn, a fence post or an unmistakeable path. After clutching at heather for half an hour, and weaving in and out of little crags, the angle relented and I spotted a rusting fence post off to my left marking the way I should have ascended. Grateful that I'd found an easier way down, I headed off to work out which of the two tops was higher. Whichever one you stand on, the other one looks marginally higher, despite the fact that your GPS tells you emphatically that the furthest one makes it by a metre. And what a cracking spot to have lunch: solid, proper inversions stretching away all round, not just wispy clouds hanging above a loch. Sunlit tops and silhouettes bursting through the clouds and testing my knowledge of the surrounding hills. There'll be plenty of reports on WH over the next few days, I thought. I wasn't wrong and don't apologise for adding to them to highlight these great two Corbetts.

I'm also still struggling to come to terms with how little snow there is in Scotland at the moment. Speckled patches in the distance on Ben More and the Lawers range made it look like late spring and the lingering remains of a winter that I must have hibernated through.

With the chill nipping at my fingertips I thought it was time to get moving again and restore some circulation. The old fence post was found and a descent further to the right than my ascent proved to be a far more straightforward way back to the bealach. An occasional post emerged, sometimes accompanied by the vestige of a track, but it soon disappeared. From the bealach, with no attempt to find a definite track, I just headed up to the saddle below Cam Chreag, glad of the frosts that kept the peat firm, then up the steeper grass and back into the sun. The route south to the higher of the two Corbetts, Meall an t Seallaidh, stretched alluringly away to the south, across an expanse of rime encrusted tufts of grass. Squinting into the sun for the next twenty minutes, the trig point was reached and another chance to sit in the sun and absorb the fascination of cotton wool filled valleys .

Misty dissolving ridges across the horizon from Meall an t Seallaidh Guidebooks and route reports suggested descending east back into Glen Kendrum and crossing the burn back to the outbound track. However, dropping into the shade and then the cloud below offered no attraction whatsoever. What would be the point of wasting the spectacular views? The south east shoulder stretched away in the sunlight, and no doubt a way would lead back to the old railway line.

As I descended toward the tree lined slopes below, my shadow lengthened to my left and I began to suspect that conditions for a Brocken Spectre were coming together. The sun was getting lower and I was still following a track that kept to the crest of the shoulder. At about 450m I came to the cloud level and across the glen I could make out a faint rainbow halo that followed me down for the next five minutes. Unfortunately, it was too indistinct for my camera to focus on the darker smudge in the middle and my photo-opportunity was lost: but no doubt there'll be a few satisfied grins elsewhere after today. Plunging into the cloud was the reluctant next step. I followed the deer fence down and down, confident that the woodland on the other side had been planted since my map had been printed. Beginning to be unsure about where I'd find a way through, I was grateful when a gate emerged from the mists and a construction track led the way back to the railway. A few more bridges, a handful of gates and in half an hour I was back in a gloomy and still dreich Lochearnhead. On the plod back along the tarmac I finally started to feel the stiffness in my new boots, but spirits rose when the car came into view: after a great day on the hill I could now spend another couple of hours playing with my other new toy - and enjoy those heated seats again.