A great looking forecast for Saturday 21st January, so I decided on Garbh Bheinn at Kinlochleven for my outing.
A longish drive, but the car was scraped and I was on my way before 8am, so not too early to get out of bed

Lots of fog en route, and plenty of people waiting to get the right moment for photos at Rannoch Moor. The fog lifted a little just beyond the best spots, so I stopped for a quick pic of the Black Mount hills and surrounds

Fog was gradually clearing, and by the time I parked at the layby near Caolasnacon, a few miles west of Kinlochleven, the sky was clear and it looked like I was in for a great day. Half an hour in, and the views were already superb. Looking back (west) down Loch Leven - the Pap of Glencoe stood out and to the north, those beautiful Mamores were already making their presence felt The walk is fairly straightforward - you're basically heading ESE over the three tops, and there's a reasonable path most of the way in these good conditions, but that does this hill an injustice. It's a steep little beggar! The first of the three summits was just ahead - Torran nan Crann Pushing on towards the next summit of Stob Coire Sgoilte, it was hard not to keep stopping for photo opportunities. Definitely a hill for looking back from, as these views prove. The Ballachulish Horseshoe in the background with all the hills west of Loch Linnhe seen behind Loch Leven's other Corbett, Mam nan Gualainn The sun was getting up above the Aonach Eagach ridge in Glencoe to the south, making photos of that tricky, so I waited till the summit for better ones. In the meantime, Garbh Bheinn's summit was looking inviting 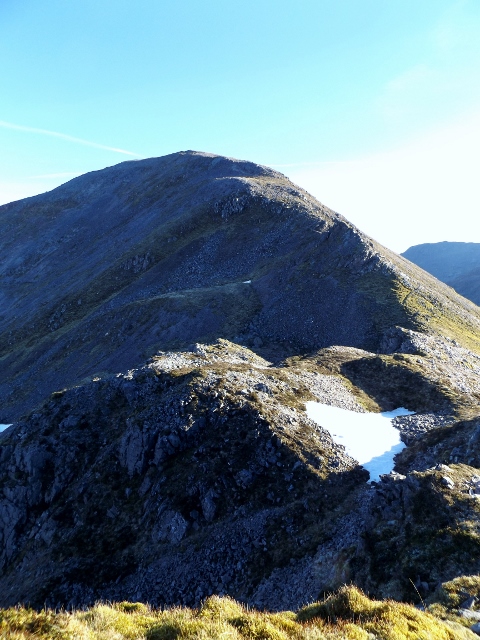 Twenty minutes later and I was on the summit, with 360 degree views of some of Scotland's most famous hills. North to the Mamores, with 'The Ben' and the Aonachs behind, and... well - it's just 'aw the hills' 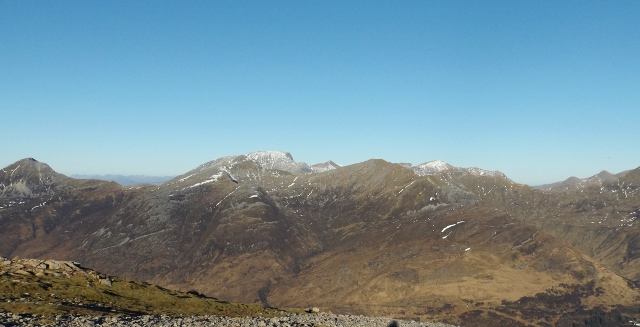 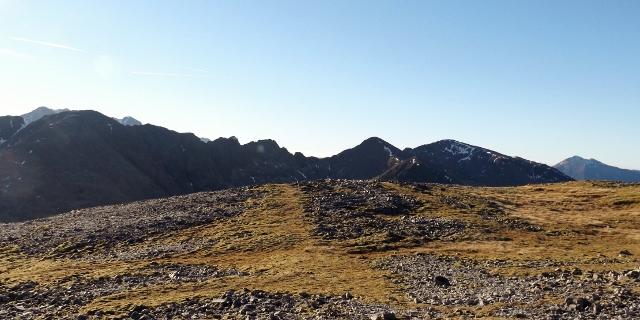 East to Schiehallion-is it really visible from almost any peak on a clear day? It certainly seemed that way today! 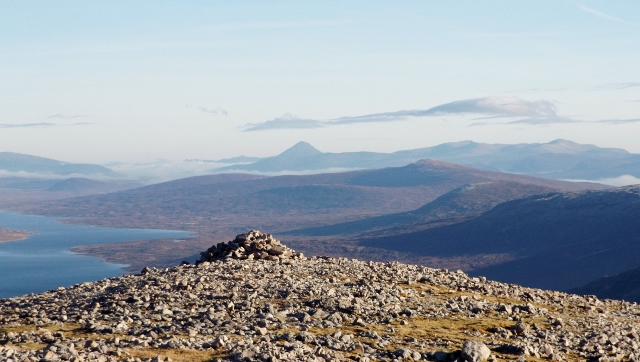 Summit pano - complete with my shadow

So much sun and so little snow - how often can we say that in January!

Time to head back, enjoying those great views again all the way. The little bits of scrambling on the hill are easy in those good conditions, but easily avoided if you don't fancy them.
It's always a different walk on the way back, and I took the opportunity of another photo across to Stob Ban from the little stretch between the summit and S.C.Sgoilte 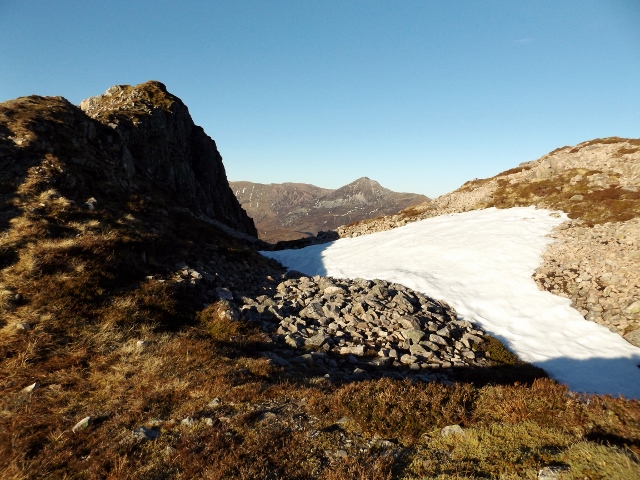 I'd had a thoroughly enjoyable few hours on the hill, including a lengthy chat with a lovely chap from Fort William. It was warm and sheltered enough at that point to stand for half an hour without adding an extra layer. Better than many summer days! Glorious skies on the journey home too, until a big bank of fog approaching Tyndrum, but the fading light and low winter sun gave me a final chance for a pic of my 'local' Munro, Ben Lomond 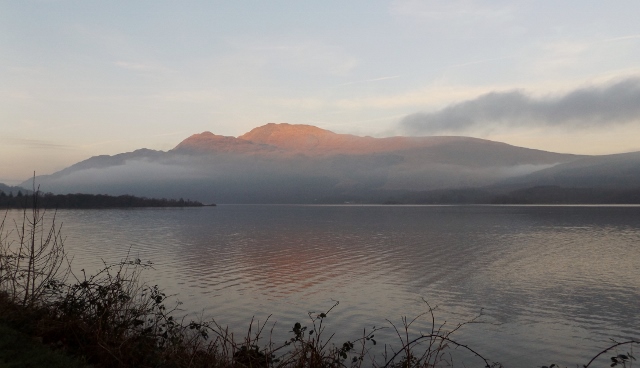 I know lots of people had a great day on the hills on Saturday. How lucky are we?

Nice report and lovely photos. Hard to believe it's January. Garbh Bheinn looks very tempting, I have added it too my ever growing must visit soon list.

Cairngorm creeper wrote:Garbh Bheinn looks very tempting, I have added it too my ever growing must visit soon list.

If you fancy a bit of a longer day, a round including Sgorr Mhic Eacharna and Beinn Bheag is very good.

That's the other G.B. jmarkb - across at Loch Linnhe. I was on the Kinlochleven one

That looks a great walk too though

Cairngorm creeper wrote:Nice report and lovely photos. Hard to believe it's January. Garbh Bheinn looks very tempting, I have added it too my ever growing must visit soon list.

Thanks Cc. It was a real delight. If I lived nearer, it would be a 'go to' hill for short winter days or an afternoon in summer.

katyhills wrote:That's the other G.B. jmarkb - across at Loch Linnhe. I was on the Kinlochleven one

Both GB look good, and we had thought about the one you mentioned Mark so nice to have it confirmed as a good route. Thank you

Easy mistake to make when there are so many hills with the same name.

I wittered on to someone once about Ben Vorlich and they didn't realise there was two of them. I meant the one at Lochearnhead not the Loch Lomond one and I think I confused him quite a bit....

I'm keeping this one for WH meet in April

The other Corbett across the loch (Mam na Gullain I think is the name) is just as nice especially if you walk the whole ridge.

I agree that "snow conditions" this year are exceptional. I had a look at Wyvis yesterday and it's almost completely bare apart from a few sad patches on the steeper slopes... My crampons are getting rusty, my ice axe is covered with cobwebs.

That looks a great hill

Fab photos and trip rep... Like BP I think I'll do this one at the April WH Meet - if it's nice!

On a day like that, the views are tremendous. Well worth the trip.

Got my eye on the other one for another day Panther! Think your crampons and ice axe might get an outing this weekend, looking at the forecast

I know lots of people don't like a long drive, but I enjoy that too, especially when you get the scenery that the route through Glencoe and up Loch Lomond offers. I love it no matter how often I do it

Saturday was great wasn't it

Looks like a lovely hill and smashing views. Love your last one of the sunset on wee Ben. I was just above you on Beinn Bhreac enjoying a similar view