Hill of the views

Hill of the views


I did Meall an-t-Seallaidh in snowy conditions from Glen Ogle a couple of years ago, but the weather was poor and I took no photos. Having had a wander up Kirkton Glen the previous weekend and reading in U059361's report viewtopic.php?f=9&t=20345 that you could escape from the woods just beyond the Creag an Tuirc viewpoint, I decided to follow that route.
The weather in Balquidder was supposed to be sunny all day, but the mist along Loch Earn persisted all the way to the car park at the church. I followed the track over the little bridge, and headed up the glen, but took a small unsignposted path on the R (not shown on the WH map) which led up to the viewpoint. There were some magnificent Scots pines nearby but in the continuing mist photos were pointless. I returned to the gate turned R, went thru a second gate and headed up the steep hillside around NNE. At about 450m I burst through into the sunshine and continued up Craig Mhullaich taking photos as I went up and marvelling at the almost total lack of snow. Above the Crag the angle eased. Just coming out of the mist Vorlich again from higher up Even Ben More and Stobinian were almost snow -free
I headed pretty well North towards the summit, but the going was very heavy and on reflection it might have been better to continue more to the East to reach firmer going on the "ridge" The summit comes into view: It was only about a km away, but I seemed to make very slow progress Looking up to the head of the Kirkton Glen 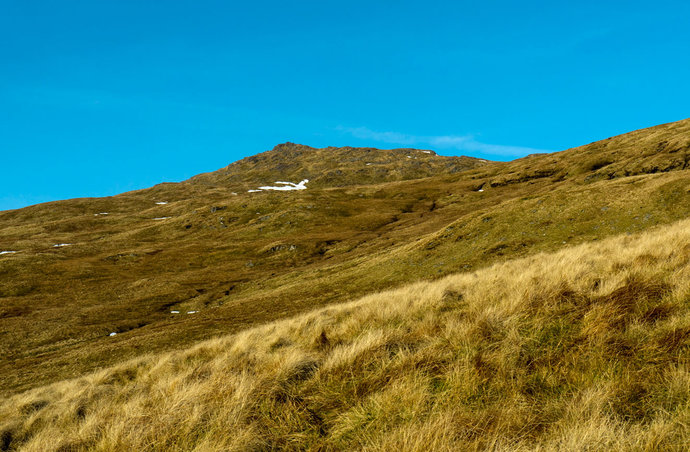 The summit again: it didn't feel a lot nearer, but I did head up more to the R at this point Firmer ground on the ridge There was even mist in Glen Ample Looking across Glen Kendrum to Creag Mac Ranaich and the Loch Tay hills . Meall Ghaordaidh on the L The "Hill of the Views" looks down on three lochs:- I had planned to follow the high ground round to the head of the Kirkton Glen, but given the time, I thought better of it and from the col before Cam Chreag descended L towards the woods. You can' beat that evening sunshine Just above the woods - the mist hadn't lifted all day
The deer fence here is not in great repair and I was able to step over it at one point. Unfortunately my way down was blocked by steep ground and a waterfall, but by climbing back over the fence, crossing the burn and climbing back in, I found a section with a lot of open ground and descended easily to the big track of the "loop". I followed this South until it cut back R, when another little path ( this one signposted) led me back to join the morning's route. It was pretty dark in the trees but I always carry a headtorch at this time of year. A great day out