Ladharbheinn.gpx Open full screen  NB: Walkhighlands is not responsible for the accuracy of gpx files in users posts

Here’s another walk from our Knoydart week earlier in the year. It’s worth saying that one of the nice things about coming here was the lack of hassle getting started on a walk. No loading up the car with gear, no hunting around for a parking space, no driving at all in fact. It’s just get up, have some breakfast, put boots on and go. Well, at least one of had boots on today, but I’ll come to that later. We hadn’t planned to save this walk for our last day but it felt like a good decision as we set off at 8am through Inverie in bright summer sunshine. We made steady progress up the Mam Uidhe track and then branched right at the Folach Gate (not that there is actually a gate to go through but that what this junction is called on the map). Here the track gently descends through the Guiserein forest – a bit disconcerting really, a bit of gentle up would have been better just to make things easier later on. Eventually we crossed the river by the Folach ruin and started the ascent proper. There was an obvious small path which followed a stream and which got steeper the higher we went. This needed a number of stops to turn round and admire the view westwards. Getting higher - view to south west

At least it got a bit cooler higher up when we reached the broad top of Ladhar Bheinn’s western ridge. A bit easier going here as well. Sometimes there is a path and sometimes not, it doesn’t get that well defined until the ridge narrows towards the summit. Unfortunately the blues skies of early morning had been replaced by some high cloud which made the next few photos rather bleached out. But the views onto the mountain’s northern slopes and across Loch Hourn were still impressive by any standard. 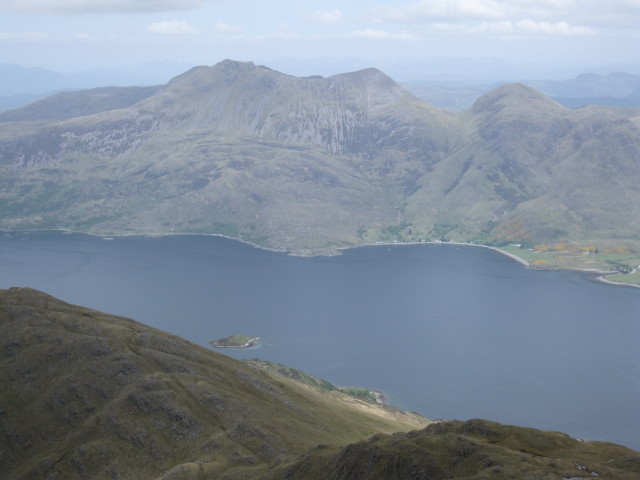 The summit ridge is narrow enough to be fun without being scary and we stopped at the eastern end for some food and some more piccies. What a fantastic spot this is – it was even midge-free for about ten minutes. 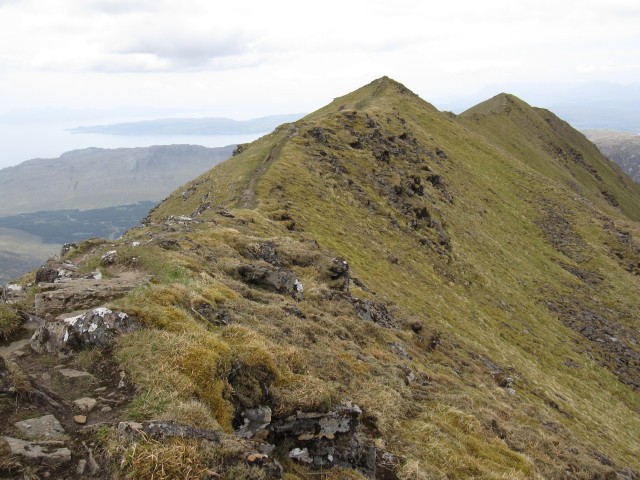 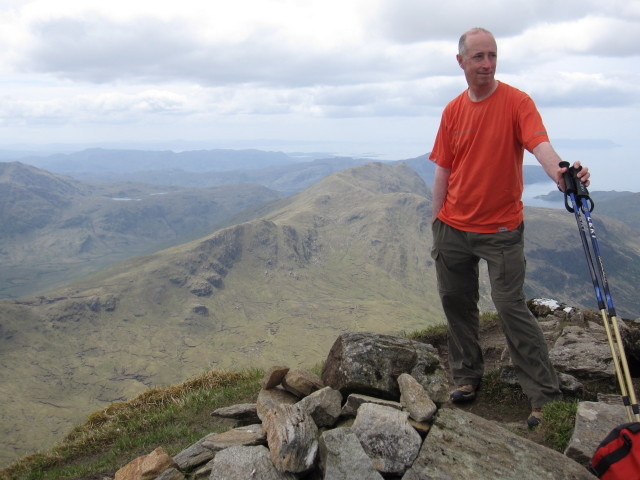 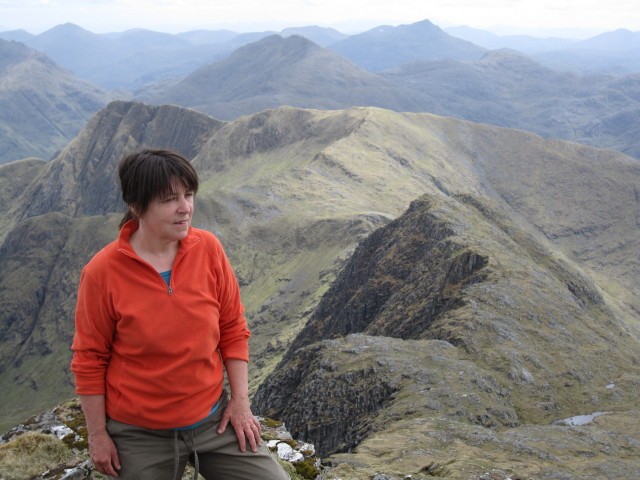 On a different day we would have continued and completed the circuit, i.e. the clockwise version of the new WH route, but today we took the easy option of returning the way we had come. Thing was, after clocking up over 60km in the previous few days, Judith’s newish boots had given her a bruised ankle so any footwear with ankle support had become quite painful to wear. So at the start of the day I had agreed that I would carry her boots and she could at least do the walk-in in some other shoes. Well, we got as far as the ruin and the path had seemed pretty dry so she carried on. Do you want your boots yet? No, I’ll carry on for a bit. Sure? Yeah, there’s only the odd wet bit to jump over. Of course the higher we went the drier it got so eventually I gave up asking.

Luckily the boot police were doing their checks elsewhere (in fact we only spoke to one other couple all day) so there was no-one else to tut and look disapprovingly. I certainly don’t think her shoes would have made it round the full circuit as we’d found Mam Suidheig pretty squelchy when we’d descended from Sgurr Coire Choinnichean earlier in the week, but they were fine for retracing our steps. Just goes to show what you can get away with if you pick the right route on the right day. 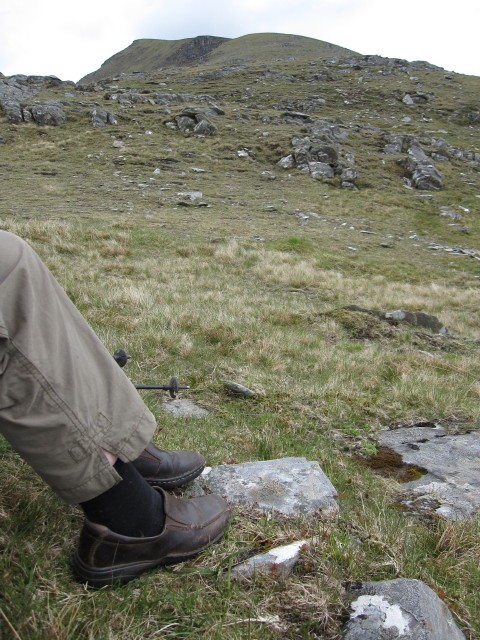 As we descended the clouds dispersed and we stopped on the banks of the Allt Coire Torr an Asgail to cool our feet off in the water for a very pleasant half hour. 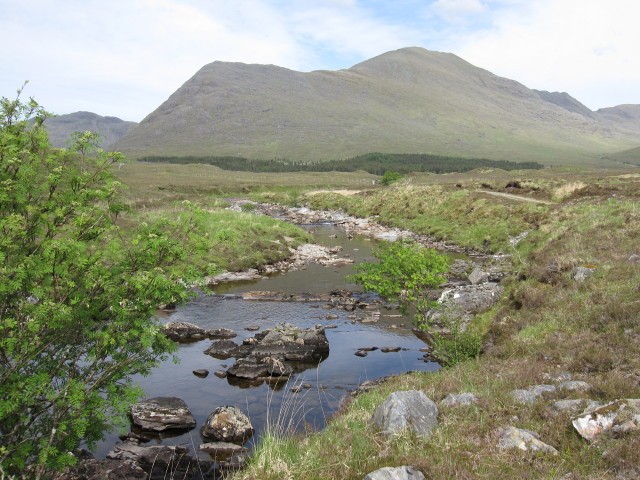 Then it was the long hot walk out in baking sunshine. (which made the uphill bit through the forest a real slog, just as I had feared). At last at was downhill again for the final stretch, and we got back to Inverie around 5pm. Although a long walk, it had actually been easier than we’d expected.

And to finish with, here’s the view when we were walking back from the pub later that evening – a fine end to a lovely week. 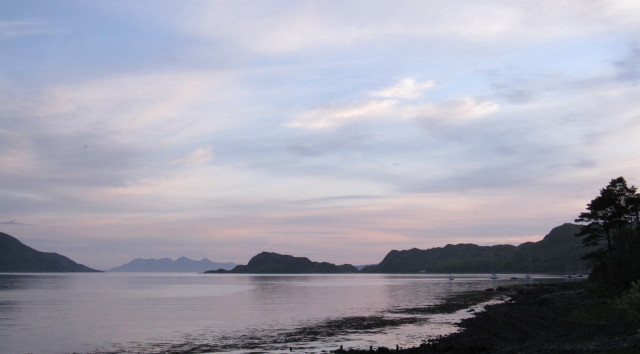 Re: Ladhar Bheinn - the muffin route

Nice pictures there, like the look of some of those ridges.

Re: Ladhar Bheinn - the muffin route