Beinn Fhada - a study in white

Beinn Fhada - a study in white


It's a weird winter this year. One weekend, we get perfect white conditions, total winter wonderland. The next one, it's April like: no snow, strong sun, walking in a single top. Then, yet another weekend comes and it turns sort-of wintry, with soft snow on higher ground and temperature hardly above zero. Weather has been so crazy recently that even Sherlock Holmes would find it difficult to explain!

Usually in January we climb easy Corbetts and Grahams or walk low level circulars, but this time we couldn't resist visiting a Munro. I suggested one from my "to repeat in winter" list. Beinn Fhada was the choice, mainly because the main approach is on a good stalkers path so even in bad weather navigation on this hill shouldn't be too challenging. Plus, as many times as Kevin has climbed Fhada, he never saw any views

so it was time to amend it. Forecast looked good so we packed our cameras and loads of batteries. Sadly, conditions turned out not exactly as perfect as forecast, but we still enjoyed a superb day out.

In summer time, if doing Fhada only, the best way is to traverse the scrambly ridge Sgurr a Choire Ghairbh, but it is not recommended in wet/slippery/soft snow conditions so this time we returned the way we came up.

Track_BEINN FHADA 29-01-17.gpx Open full screen  NB: Walkhighlands is not responsible for the accuracy of gpx files in users posts
I must say, Fhada is a grand mountain. Not the highest in the area but certainly one of the most spectacular. Everything about it cries big, monumental. When I climbed it for the first time, I witnessed the morning mist lifting from the rim of Coire an Sgairne, it made the mountain look like a giant cooking pot. Another time, when we visited A'Ghlas-bheinn, looking towards the steep cliffs of Beinn Fhada covered in icy snow, I thought I was in the Alps!
...
Today, it was more like Scotland again, shades of brown and grey down in the glens, black and white higher up. From the car park in Morvich, we studied the ridge of Sgurr a Choire Ghairbh:

Of course it was not the time for any silly ideas, so we started on the usual approach, the path to Glomach Falls. There was too much of grey cloud about to my taste, but we hoped it would break off later. I'm always amazed by the view of the southern side of A'Ghlas-bheinn, like giant, fat fingers:

Towards Bealach an Sgairne. Not as much snow as I hoped for and the temperature was higher than calendar would suggest

We took a break to strip off extra layers... Not exactly a winter outfit! Sometimes you will see me dressed exactly the same on a cold summer day (maybe except from winter trousers). As a comparison, here is a photo of the very same view, taken in the last days of March 2013:
(((temporarily not available)))
But maybe I shouldn't complain. The mild weather allowed us to climb 4 Munros in January, all of them repeats but we still enjoyed each outing

At the moment it was more "a study in brown"... As I was standing there, fiddling with my camera, suddenly we heard a high "vrooming" sound. I looked back behind me and could hardly believe my eyes: two motorbikers were making their way up the footpath. I jumped over the stream on stepping stones, thinking they won't follow me but I was wrong. They somehow took their vehicles across the river and bluntly vroomed past us, covering us with bits of wet vegetation and leaving behind a cloud of stinking exhaust fumes. I was so shocked I couldn't speak, Kevin asked:
"Is this still NTS land? As far as I know, you must have the landowners permission to use motorbikes on footpaths, and I bet that these two don't have NTS's permit!"
I don't know the outdoor code by heart, but I understand that driving motocross bikes up Bealach an Sgairne is not exactly legal????
I was glad that soon after the encounter with the motorbikers we turned off from Bealach an Sgairne path and away from the stench of burnt gasoline

I bet the exhaust fumes stinkified the whole route up to the bealach! There was another pair of walkers about 5 min behind us, they said they were climbing A'Ghlas-bheinn and now I felt sorry for them, they would have to breathe that smell for much longer than us!
No photos of the bikers as I was too stunned to even think about photographing them...
Thankfully, as soon as we turned on to the Fhada path, we could put this unpleasant encounter behind and enjoy the views, albeit restricted to the surrounding rocky cliffs:

The stalkers path is excellent and makes for fast going, but we didn't push it too fast, just enjoying the experience, we had plenty of time. About half way up the corrie we met two walkers descending from the summit, they said there was very little if any ice higher up, just soft snow. Which was fine by me, at least I didn't have to dig up my crampons, hidden somewhere at the very bottom of my rucksack!
The upper Coire an Sgairne is an enchanting place and we stopped here for a breather, to enjoy the charm of this spot. We were above the snow line now and could begin our "study in white": The vertical cliffs of Sgurr a Choire Ghairbh:

Still no gloves and no winter coat? To be honest, at this level it should be freezing cold, but so far, even the snow was melting under our feet: As we continued on the zigzagging path towards the main ridge, the wind picked up, but it was still an uncanny weather for this time of the year: Kevin took the opportunity to record a few panoramas of Coire an Sgairne, for the "study in white" files:

Sgurr a Choire Ghairbh in slightly better light. There were patches of blue sky above us and we hoped we might, just might, get a glimpse of the grand views... Sadly, it wasn't meant to be. As we emerged on the flatter ground just below the 768m top, we saw that the summit was well covered in clag

The only views at the moment were east/north east towards Sgurr Gaorsaic and the Munros behind:

Posing by the cairn at the top of the path, with the best view of the day behind me: After a short break by the cairn, we wrapped up in warm layers and continued up the final climb to the summit. It's an easy ascent of less than 250m, but as we trudged up, my knee began to ache (the old injury just does not give up easily!) and we had to slow down significantly. Despite not looking happy in this snap, I was still enjoying the climb. The knee ache is something I'm learning to live with, accept and embrace. They say no pain no gain Just before entering the cloud, the view down to Gleann Gaorsaic: Just below the summit, the ground becomes more rocky and I had to watch my every step to avoid going a** over tits

Summit was reached successfully, but views were non-existent and soon it started snowing... It seems Beinn Fhada simply does not like Kevin and every time he's on the mountain, the curtain of cloud is drawn... Another group arrived about 10 minutes after us, we waited patiently but the stubborn cloud simply didn't want to shift. We were first to give up and began to descend. We discovered that the clag has indeed shifted, just not enough to clear off the summit. At least, on the way down we had some nice views of Plaide Mhor: 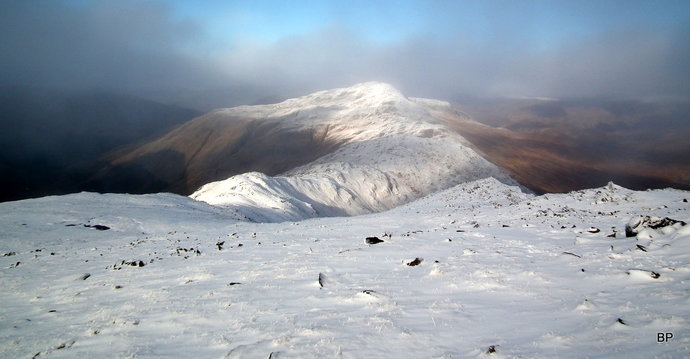 Indeed, conditions were improving as we descended, so we didn't rush it and enjoyed what we could of the "study in white" experience: Going for it Jaxter style The old stalkers path gave us an easy, comfortable descent back to civilization. No more stinky motocross riders on the way and at least a taste of proper winter conditions. Beinn Fhada is a good hill for this time of the year. Of course, combining it with A'Ghlas-bheinn sounds more practical for a long summer day, but as a winter outing, the quick up-and-down route is highly recommended!
Walking down the glen:

Forecast for the next weekend is looking very gloomy at the moment, but I'm still not losing my hopes top climb another hill, maybe a smaller one this time

Especially as I'm hoping to be up there in a couple of weeks, and am desperate for some of the white stuff!

Thank you for the idea of Beinn Fhada as an excellent winter walk . We were in Kintail Sunday, expecting good views that never happened as well. Lovely photos

Thanks for that, one of my favourite areas and it brought back memories of a long summer day when I used the ridge as the descent route. I think Beinn Fadha is much better than its reputation suggests, and the views are mouthwatering - you'll just have to get Kevin back up there again