Sub 2000' hills included on this walk: An Staonach, Ben Shieldaig

A decent forecast on Sunday had me heading for Beinn Damh. I'm quite picky with the weather when I head out west, so it was a bit annoying to drive through a beautiful morning to low cloud from Kinlochewe onwards. There were shafts of sunshine poking through, so I set my sights on the lower (but no less worthy) Ben Shieldaig. Always thought I would use the train and bike to get to this via Strathcarron, but I could never seem to get the timings to add up in a satisfactory way.


Shieldaig.gpx Open full screen  NB: Walkhighlands is not responsible for the accuracy of gpx files in users posts
Liathach across Loch Torridon: 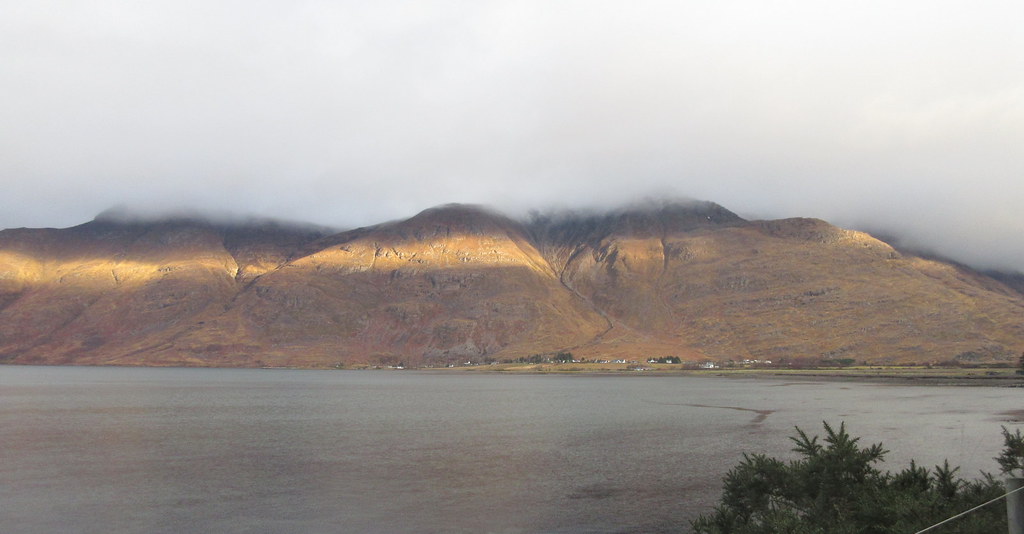 So it seemed like a good idea to combine Ben Shieldaig and An Staonach today - while less immediately appealing than Beinn Shieldaig, An Staonach is well located for looking at the eastern corries of Beinn Bhan. I hoped the cloud would lift and parked up next to Loch Dughaill. I walked up the road for 15 minutes first, then headed cross-country for An Staonach. Newer maps show a track over this hillside to Loch Lundie, but it wasn't on my map and I couldn't see any sign of it.

After crossing some heather, I found the track - the OS are going a bit overboard showing this as a vehicle track - it's more of a faintly worn quad bike trail over the heather. Near the high point, I left the track/path for the northern slopes of An Staonach. 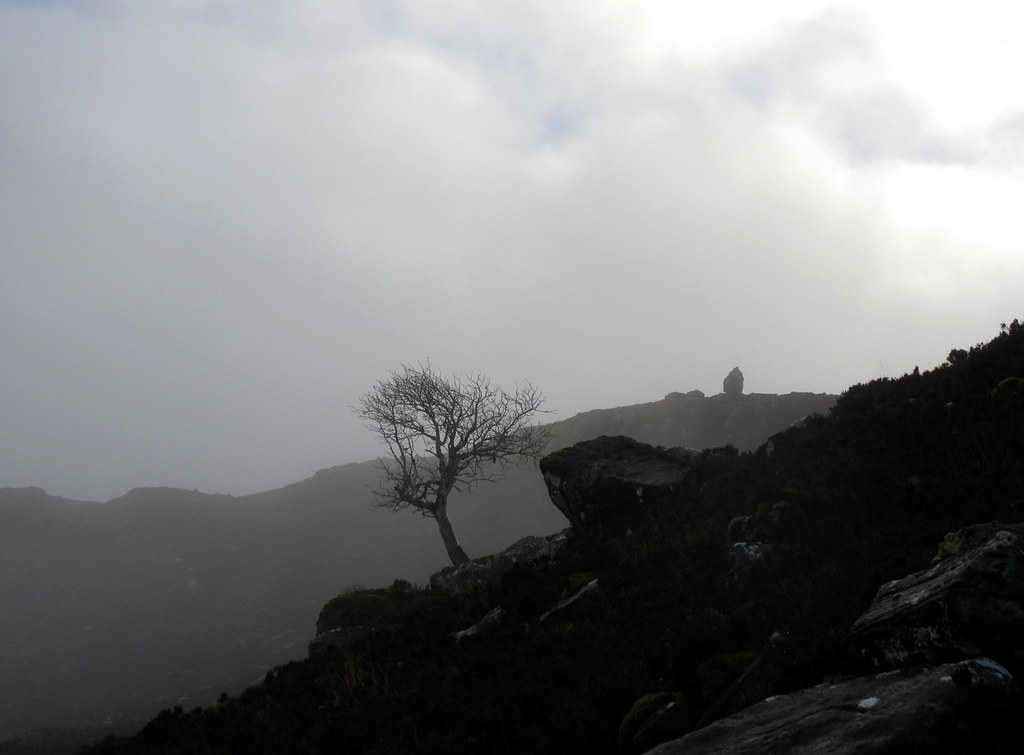 The cloud was coming and going but it was mostly clinging onto the hills quite stubbornly. Thankfully the hillside made for nice walking over sandstone pavements with erratically perched boulders to add interest

A glimpse of the eastern corries of Beinn Bhan: 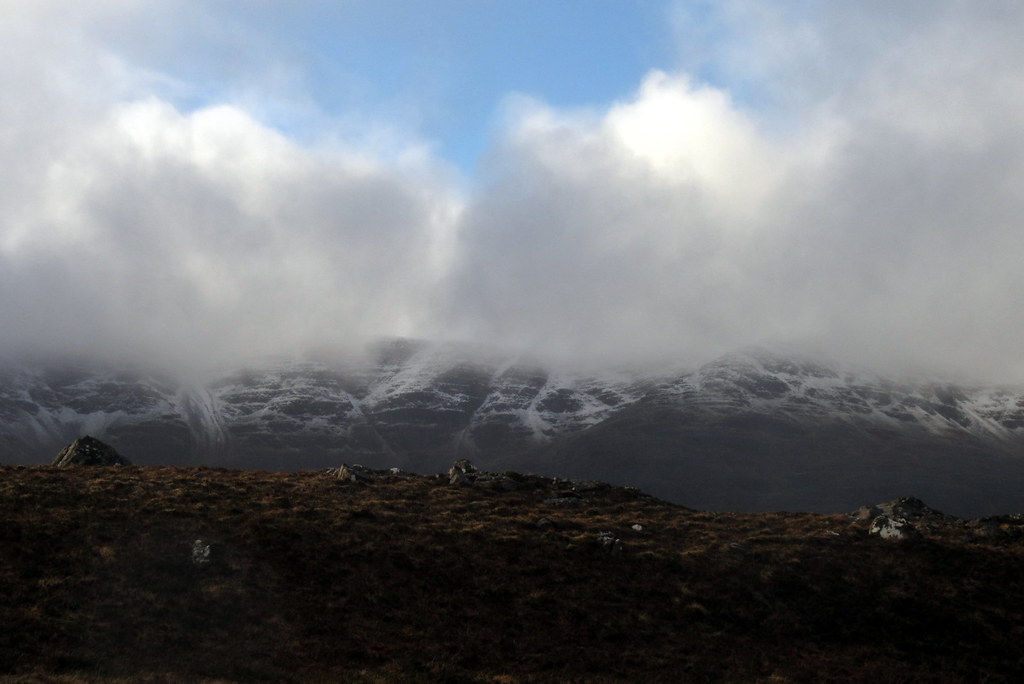 Boulders near the summit of An Staonach: 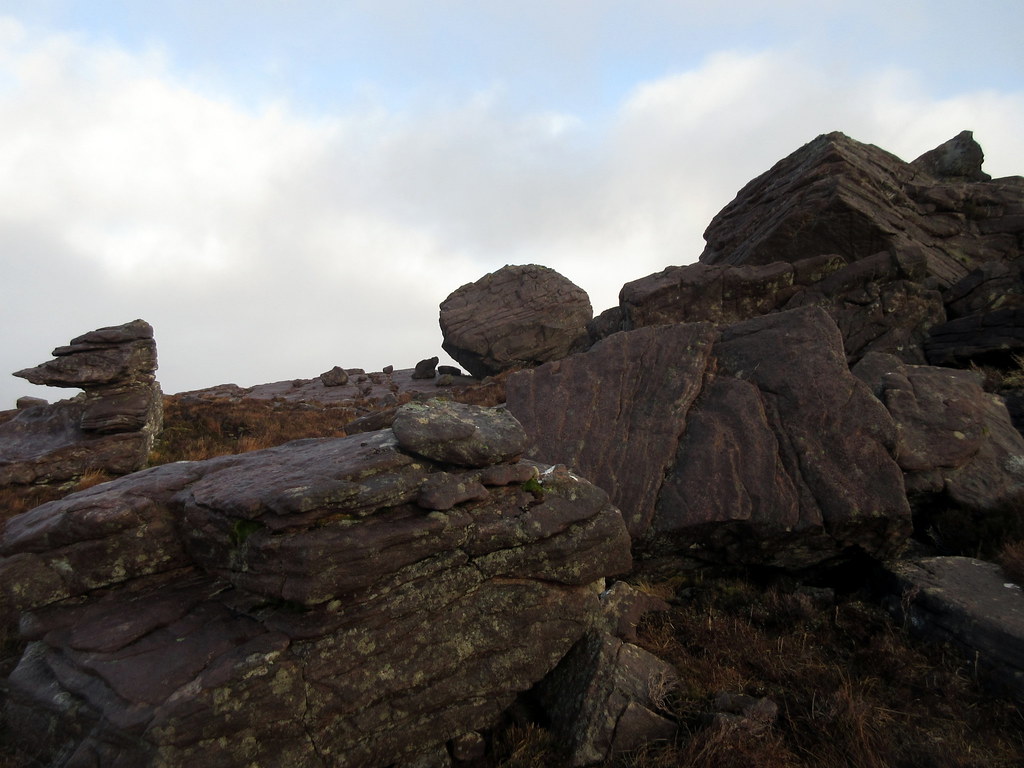 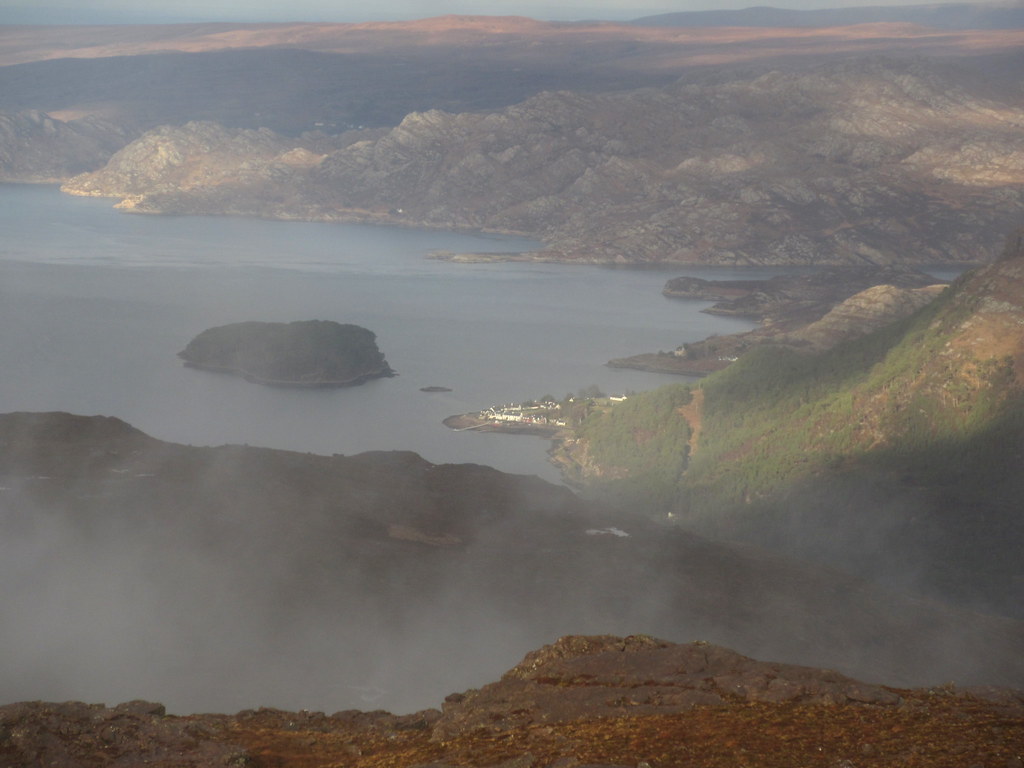 I dropped a short way down the eastern face then followed ledges southward - the hillside here is slashed by bands of low crag, and it takes a bit of weaving to get through them. Lower down it began to rain.

It was a bit miserable and rainy crossing the Lochcarron road, and some of the way up onto Ben Shieldaig past the phone masts. By now I was wondering why I hadn't driven back to some of those nice sunny hills further east. Frustratingly, the weather wasn't that bad, and was clearly nicer further north.

Luckily for me the cloud began clearing on the last 30 minutes to the main summit of Ben Shieldaig, and the sun came out - this was more like it! This was the bit of the walk I was looking forward to most anyway. There was a deer fence with a ladder stile over it on the final col. 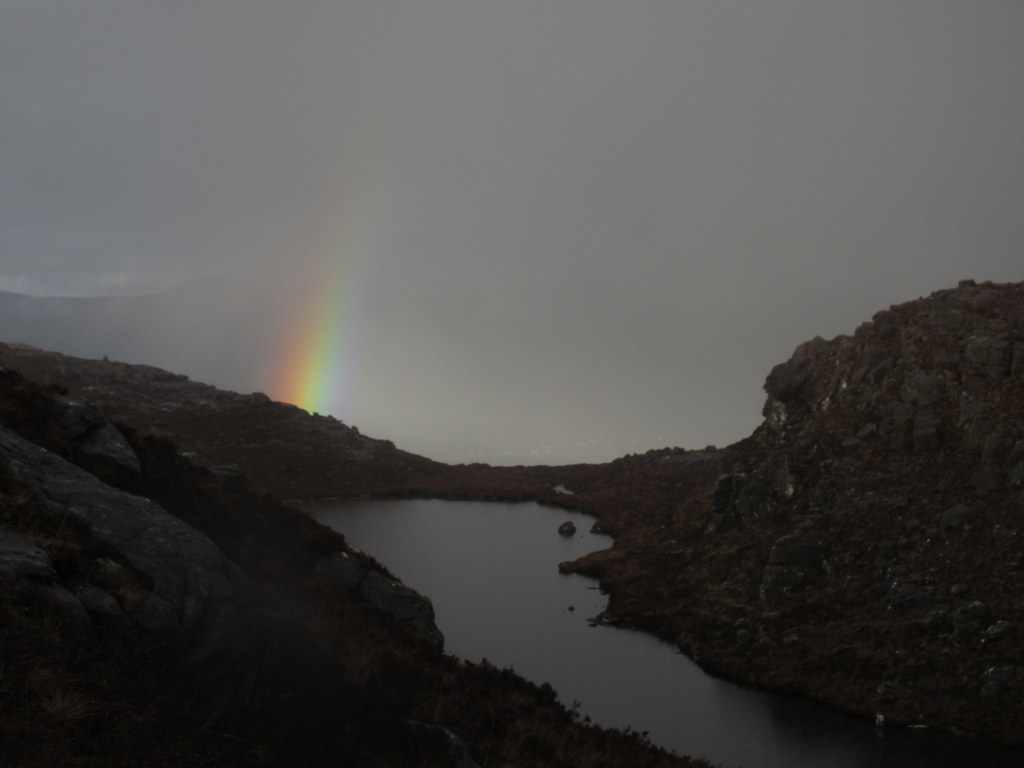 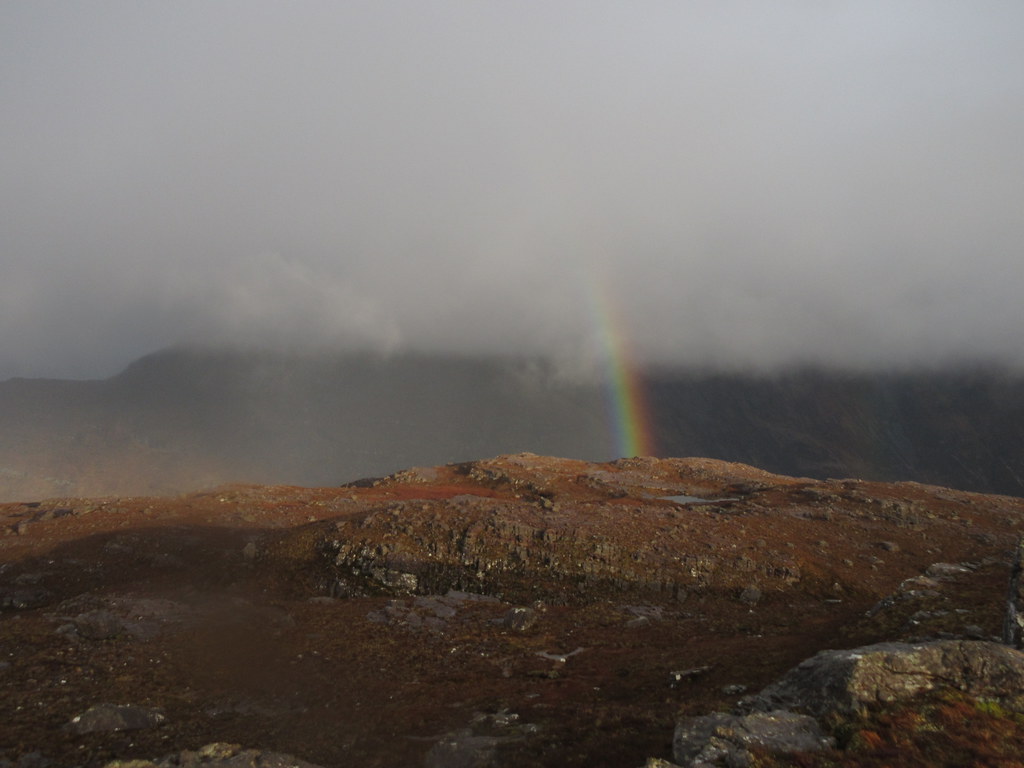 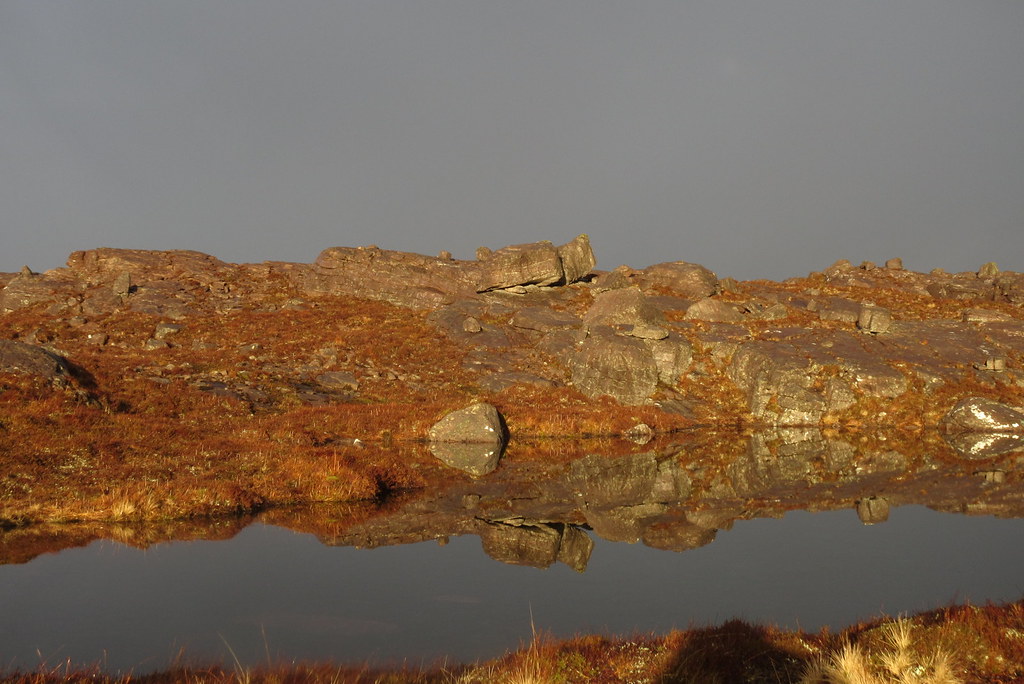 Summit views were pretty good but the more northwesterly top looked like the place to be. I went on to it and then slightly beyond, until I was looking directly down onto Shieldaig and Loch Torridon. Best weather and views were out over the end of Skye and on towards the Harris hills, but Beinn Damh wasn't looking bad either. Mind you, it was quite late now, and if I'd stuck with Beinn Damh, I'd have been on my way down it before the clag had cleared. 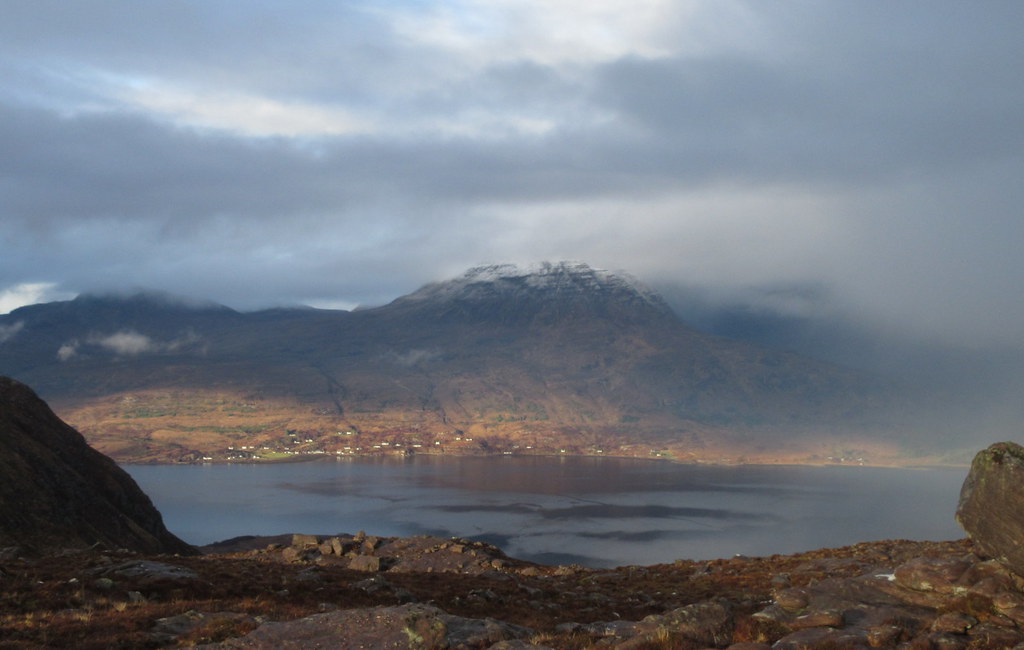 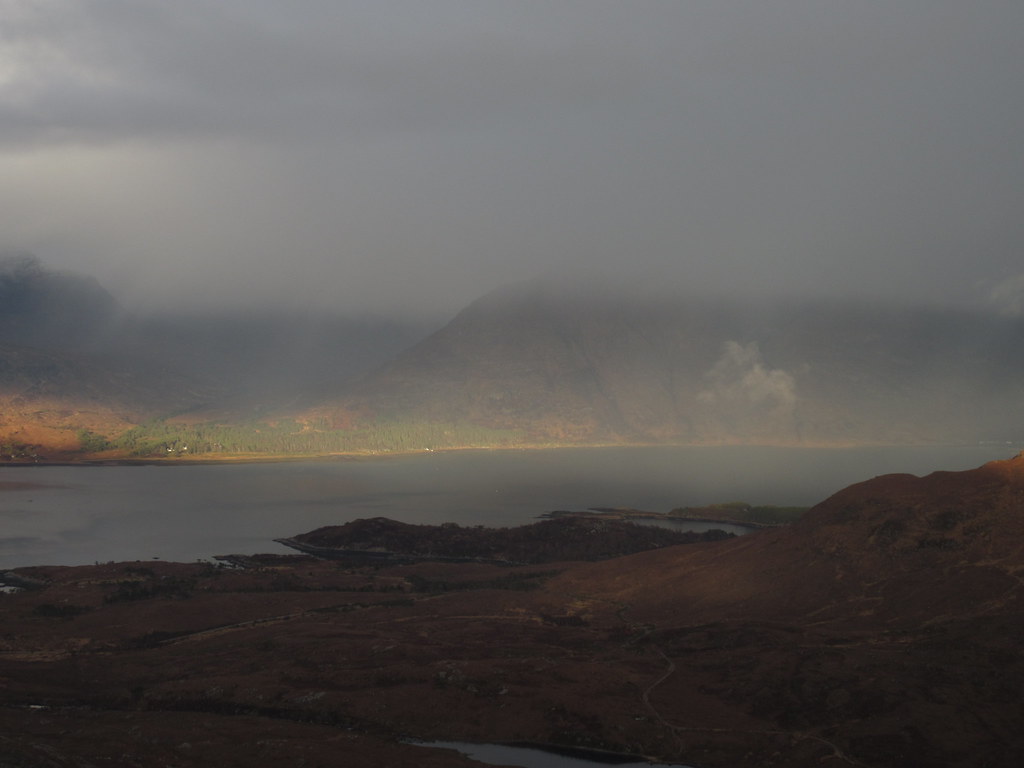 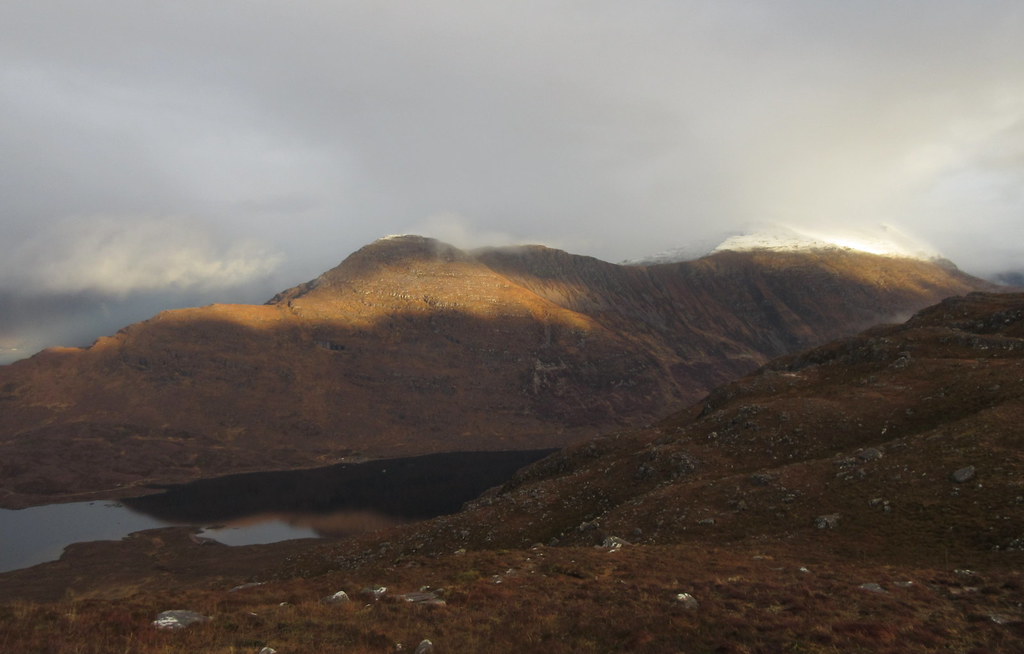 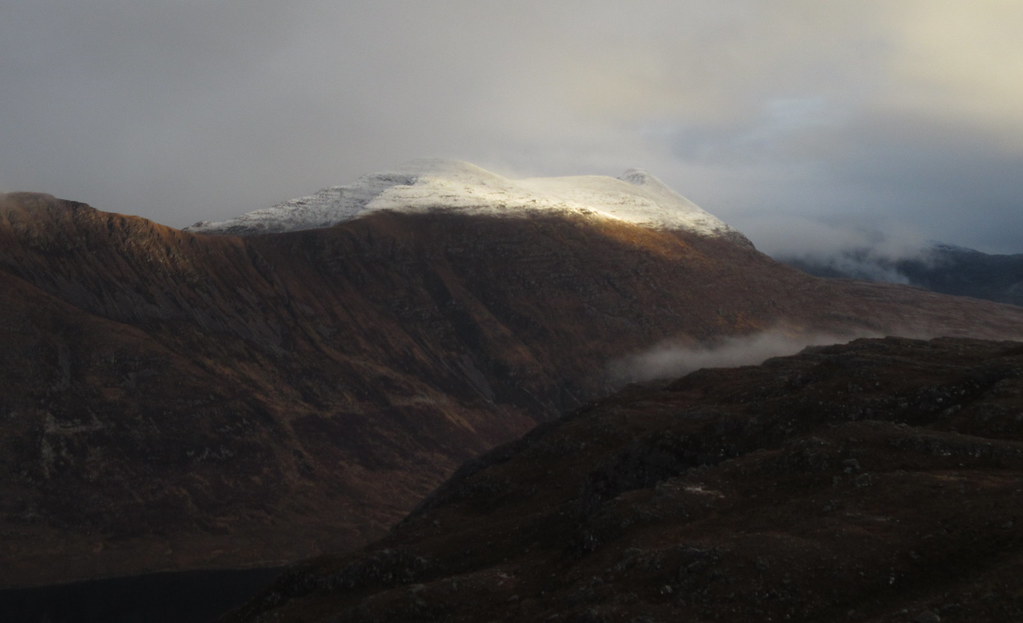 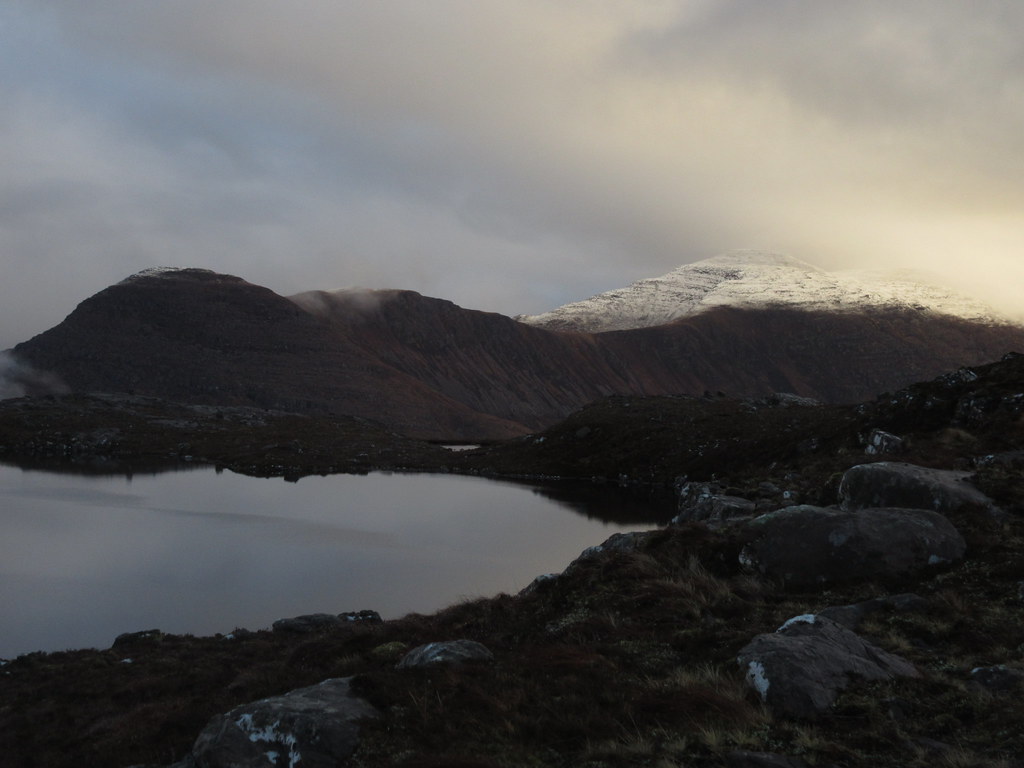 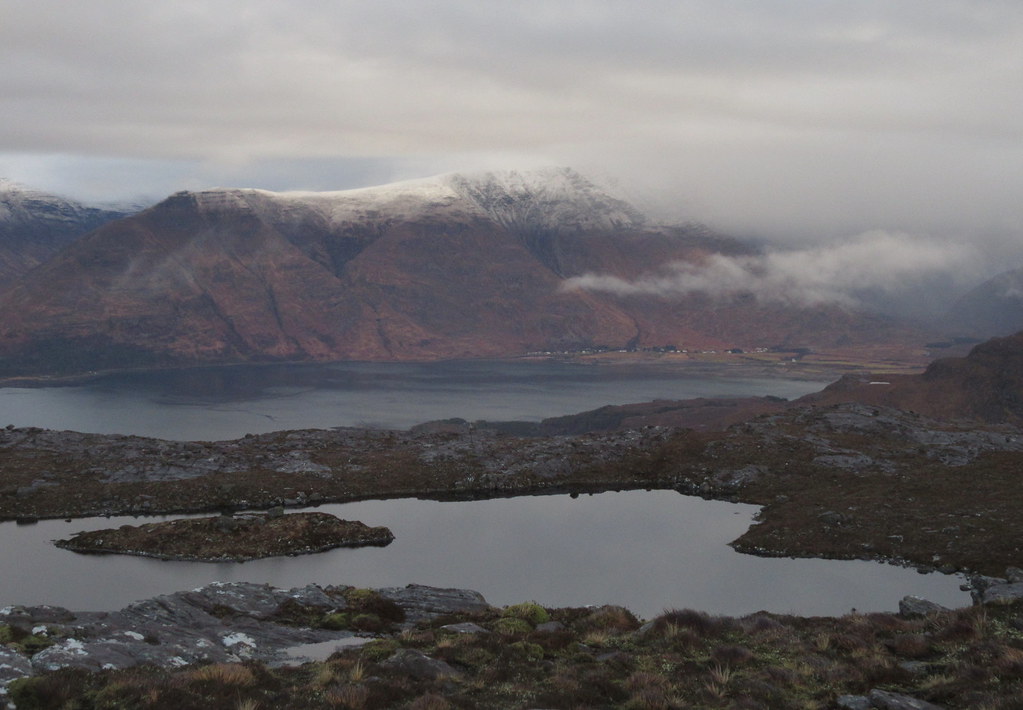 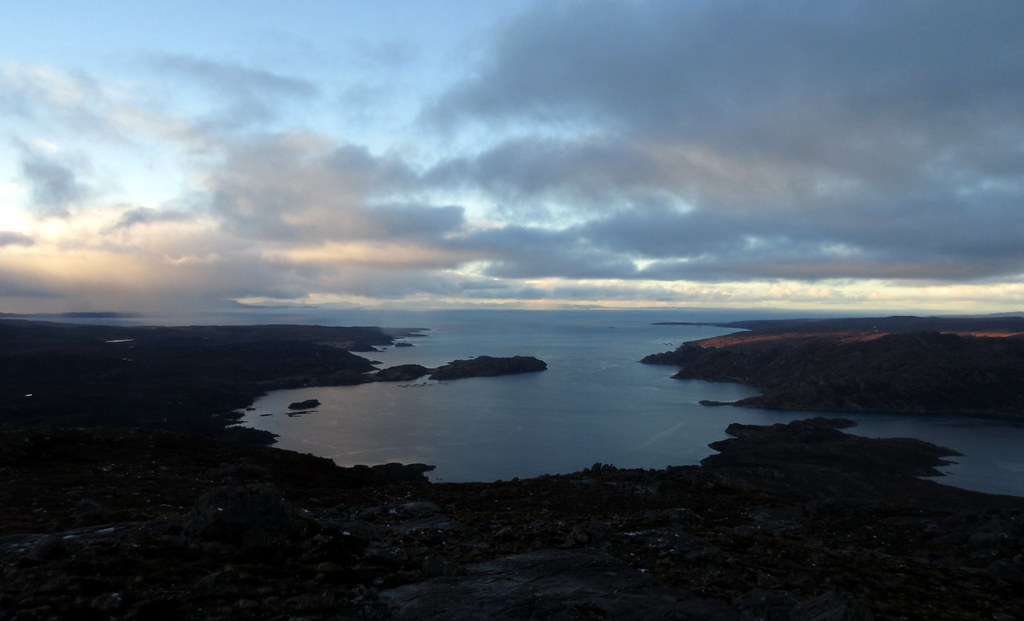 With the North Harris hills in the distance: 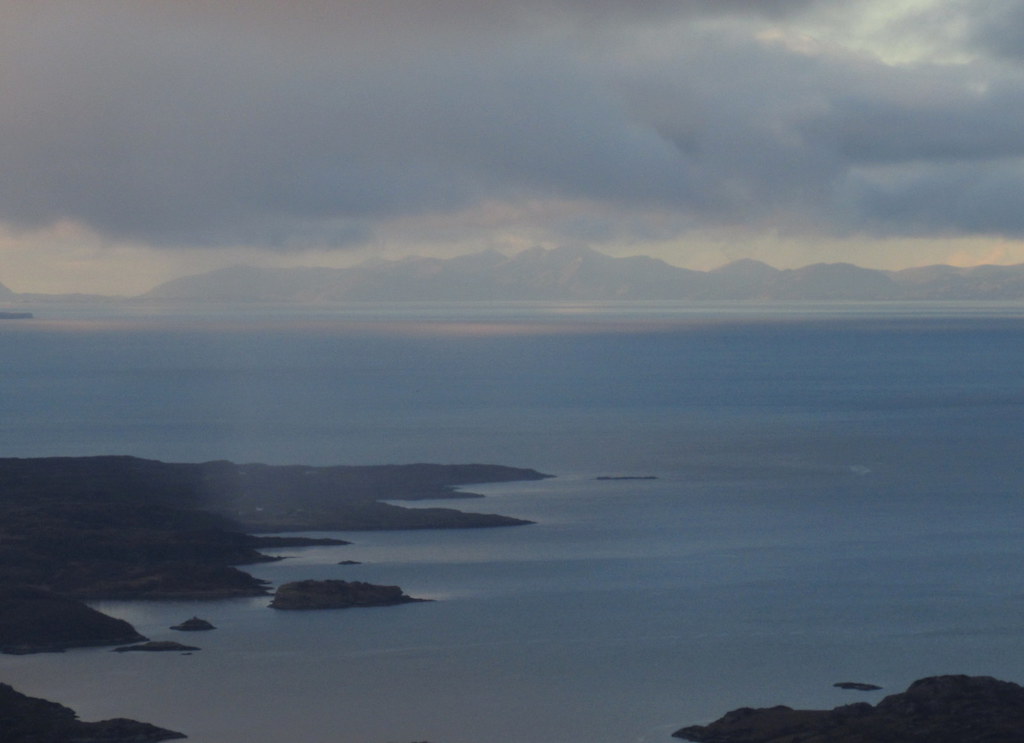 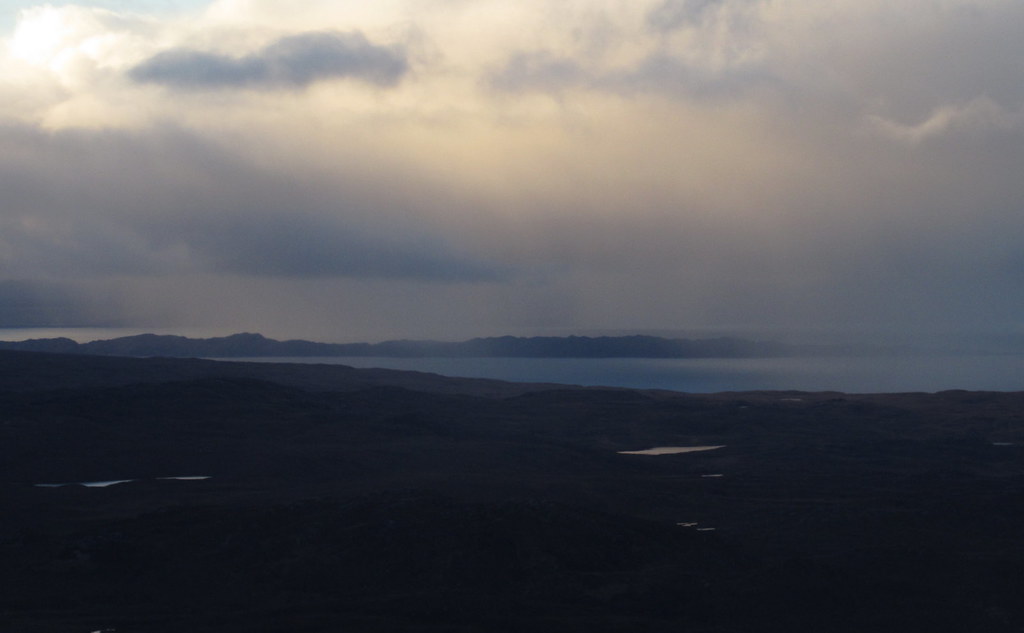 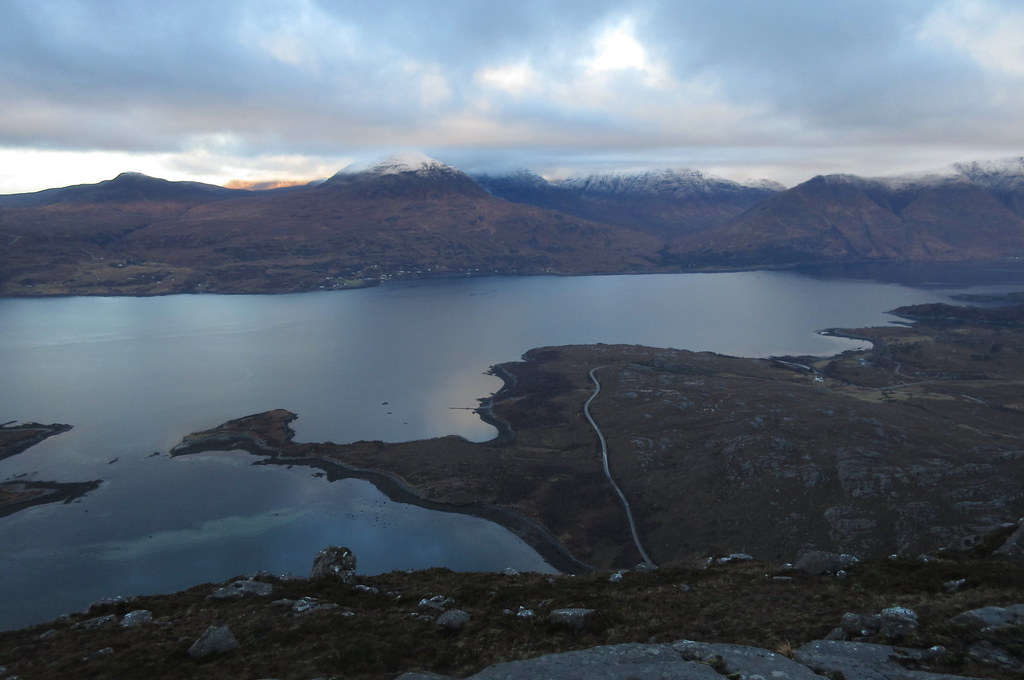 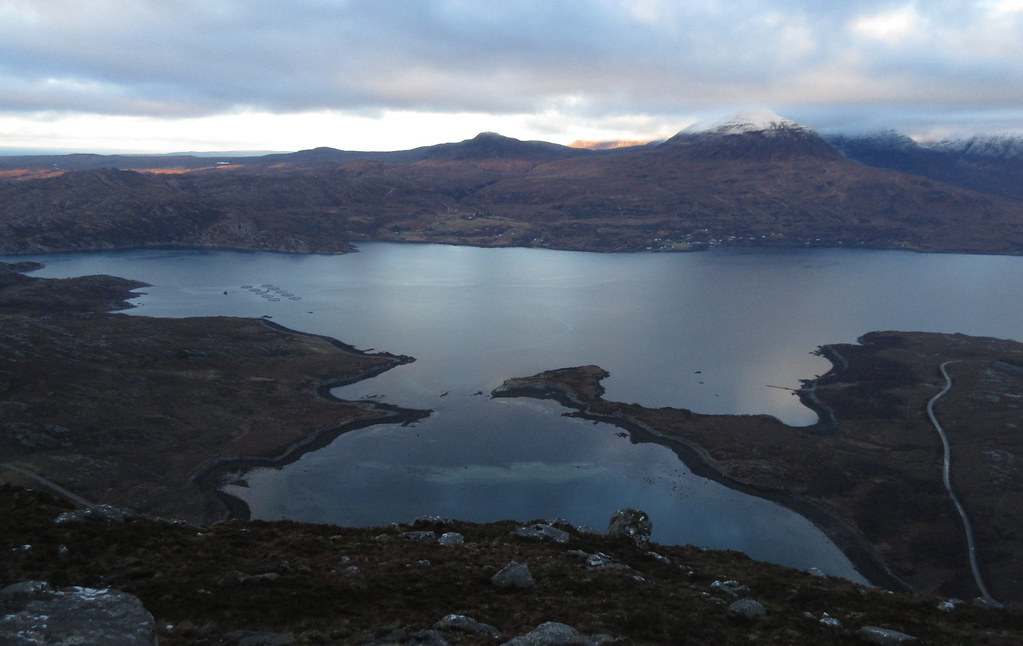 Beinn Mholach and Stornoway in the distance: 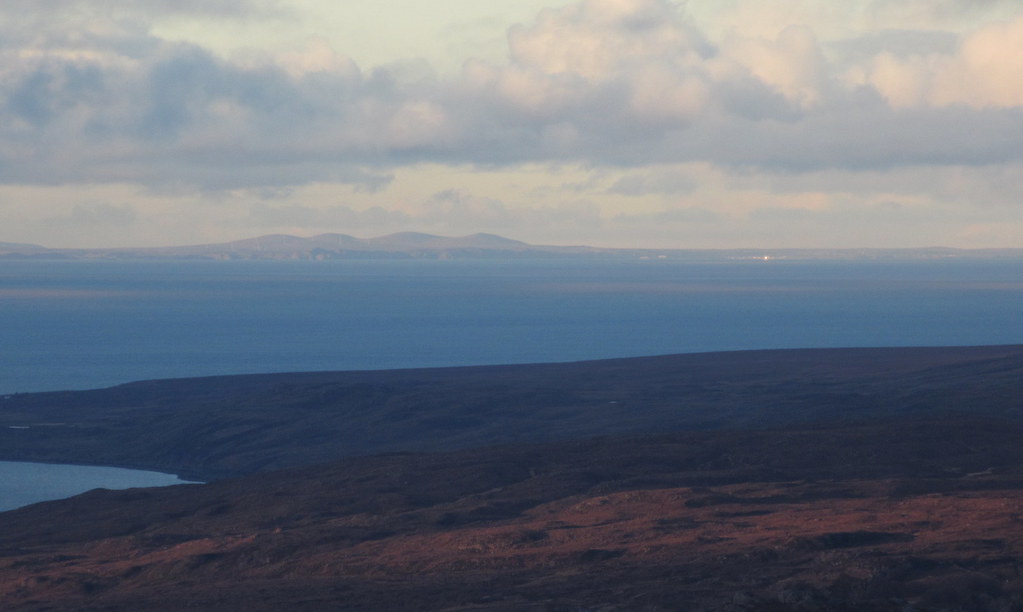 After another break, I headed back over the main summit to the col with the deer fence. Instead of crossing the fence, I started dropping steeply back down to the car. Pretty rough going but quite quick.

Over to to Skye: 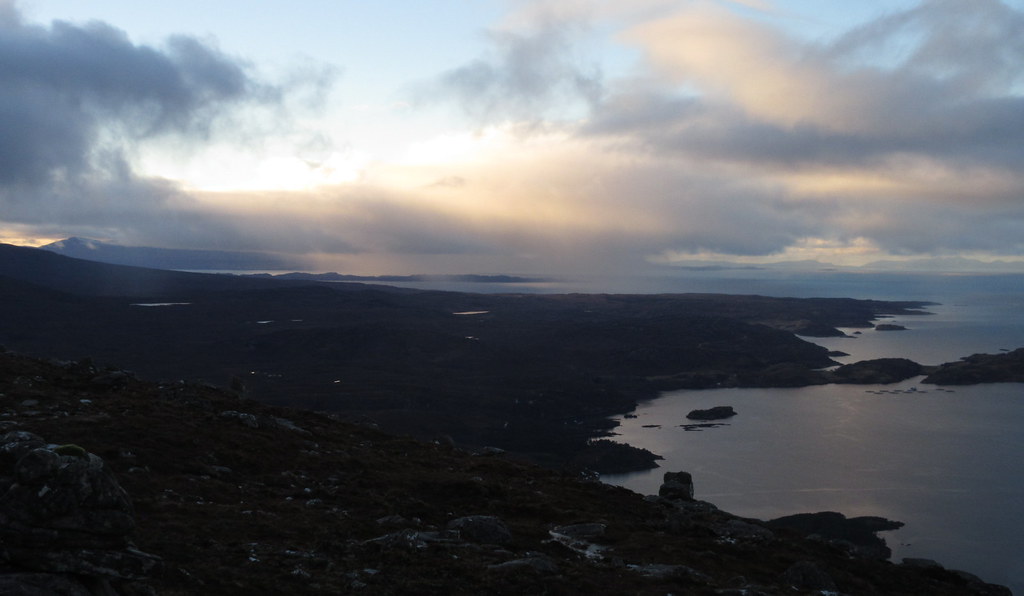 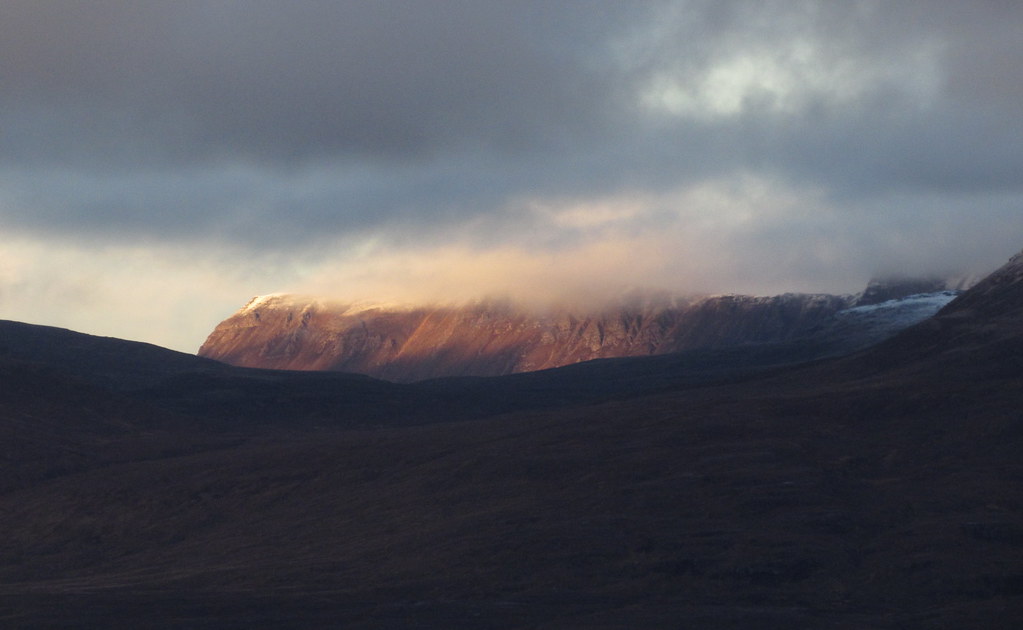 Shieldaig from near the top: 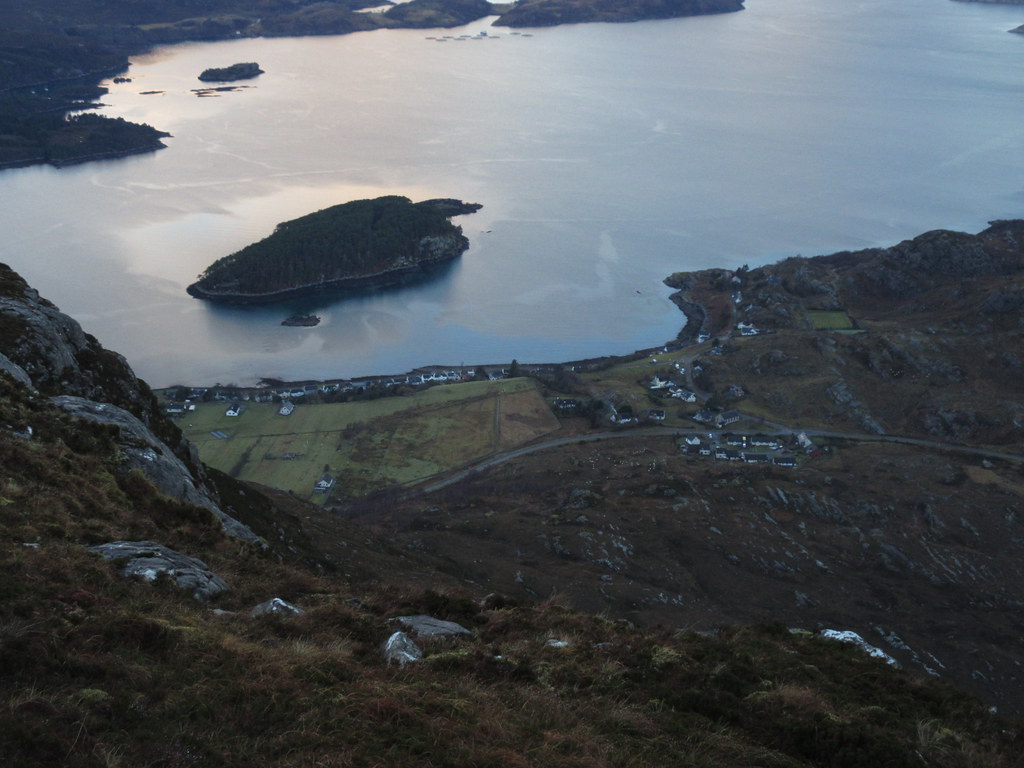 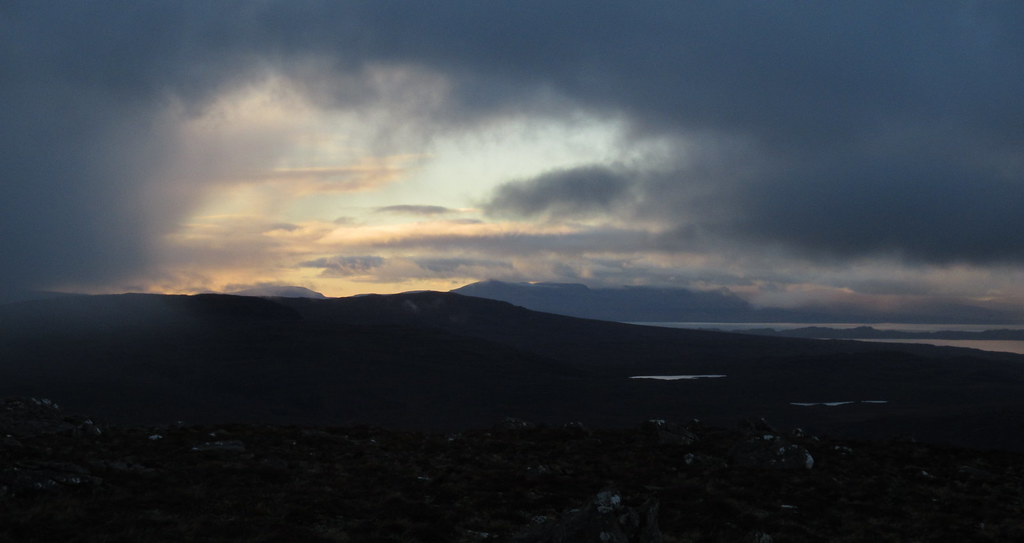 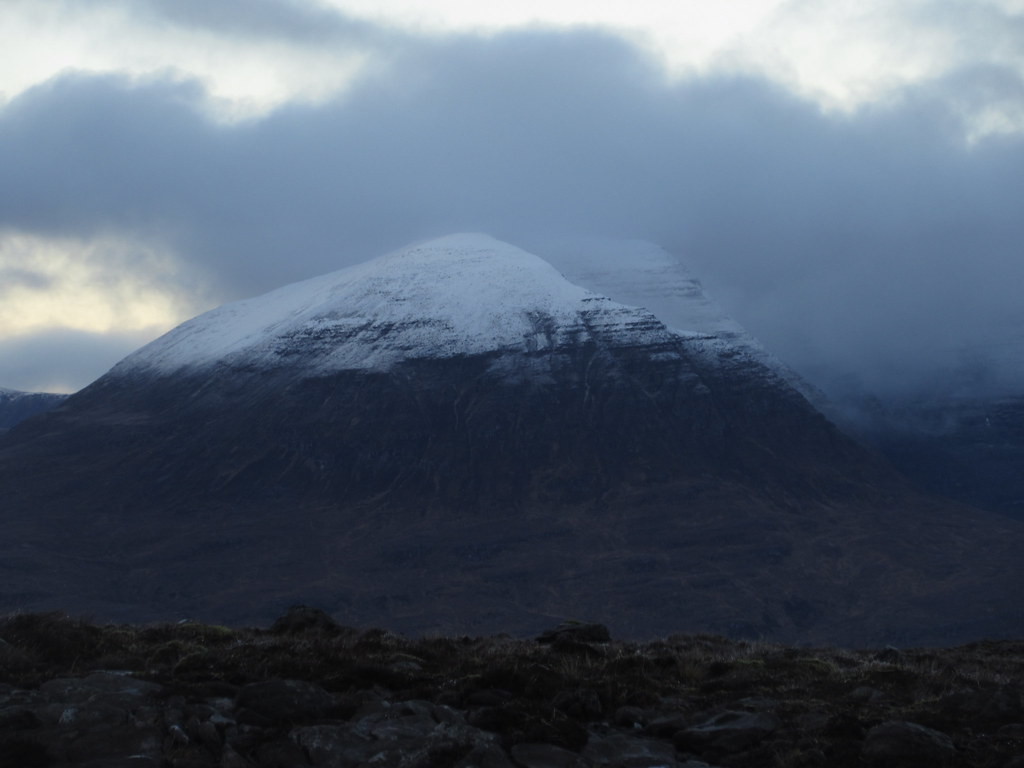 Dropping down to the car: 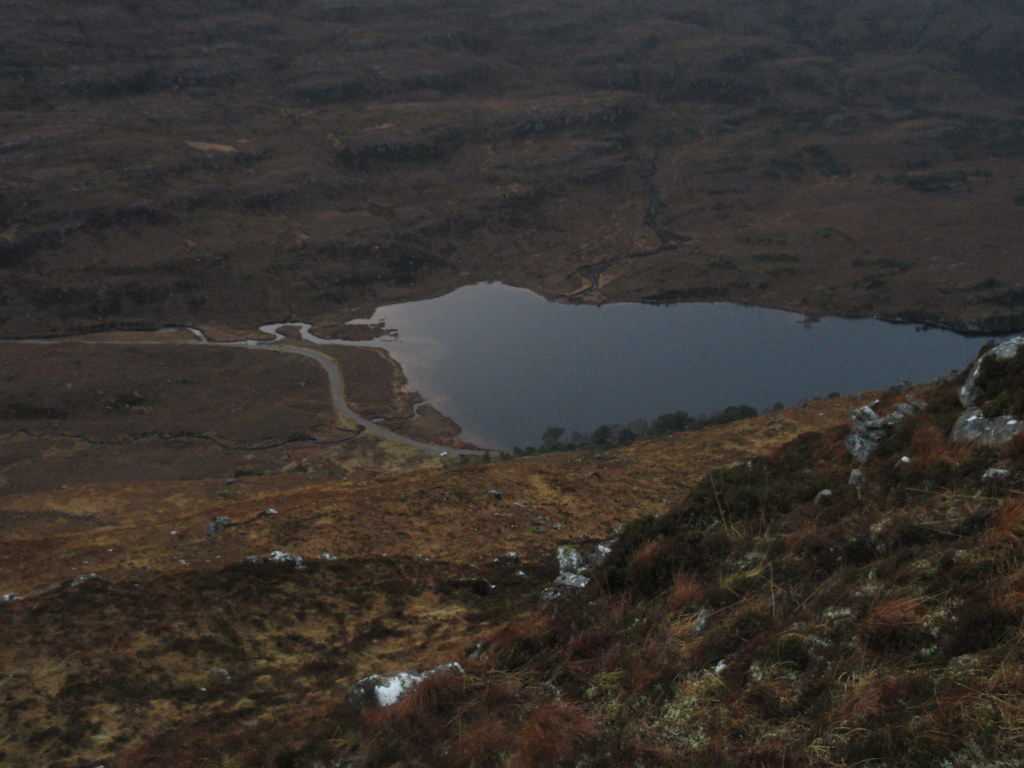 Not a bad day out in the end - a decent half day, although I might have been better starting later and just going straight up Ben Shieldaig.

Oh i love Torridon!!! Even when the weather isn't the best. Both look liked worthy hills. Shame they're so far away

Seems the weatherman was wrong about the clag last Sunday, but still a decent day. I'm keeping Shieldaig for a winter walk - I mean a proper winter walk, with snow and blue sky... If we get any of that on lower hills this year

Any walk report with Torridon in the title gets my attention

Love the shots of the rainbow. I'd have been happy with that as a day out. Can't wait to get back up there.

Yep, seems to be some unanimity on this: Torridon is pretty damned good, almost whatever the weather.

We had a slightly frustrating few days there last May Bank Holiday - frustrating because the weather put paid to some more grandiose plans; but once we'd mentally accommodated the new situation, it was still wonderful Torridon....

Nice to see Ben Shieldaig make an appearance. Haven't been up it but have admired its steep north slopes every time I've been past. Definitely on the to do list. Certainly looks steep and elevated going by the shot of Shieldaig itself.