Having read many other walkers accounts of their days in the hill I thought I should finally get round to doing one myself. I parked at the weather station just west of Abhainn an Torrain Duibh and ignored the suggested route sign to Beinn Liath Muhor Fannich which would take you through the new forest plantation with circa 70 metres of ascent which you would come down at the other side of the forest. I was using the old "The Munros" book from about 15 years ago which shows these four hills as one day. As per the book I went along the west side of Abhainn an Torrain Duibh which is a level walk if in places slightly boggy in places. The book said to cross Allt an Loch Sqeireach and start up the grassy/heather ridge of Creag Dubh Fannaich. However after having had enough of grassy hills having recent taken the direct route of Annach Beag I decided to follow a path which went up the north side of Allt an Loch Sqeireach.

After about 2km of following this path is starts to fade out on flatter peat bogs and at that point I headed up the steeper but much shorter grass of the north slope of Creag Dubh Fannaich. I did consider skirting the last 100m of this top but found you need to go over it to stay on the right route. Then a straight forward pull up to the top of the first Munro of the day, Beinn Liath Mhor Fannaich (2 hours 24 minutes). 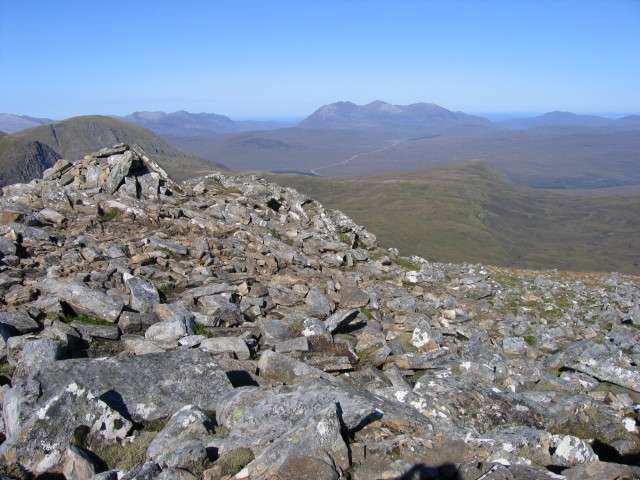 Next hill of the day is the highest. From the cairn of the first I headed south west from there to join the ridge to Squrr Mor. However, I encountered very steep rocky ground and I suggest going north west from the cairn for say circa 100m before turning south west to try to get past the worst of the boulders although the ground will still be steep. After the boulders a path is picked up that takes you to the top of Sgurr Mor (3 hours 15 minutes), The path didn't seem as eroded as I expected from the description in the book. I got a great view over a lot of hills I had done in the area nearly all of without previously getting a view from the top! Meall Gorm and An Coileachan from Sgurr Mor An Coileachan from Meall Gorm Next two hill are a pretty simply, easy going walk along the broad grassy ridge, at least in the Indian summer weather I had the pleasure of walking them. Roughly 50 minutes walking between each hill which meant I was on the top of the fourth in 5 hours. The walk out started by retracing my steps to Bealach Ban and then on a heading slightly to the west of the Meallan Buidhe at which point a path is picked up until you pass this wee hill and enter more peat bog where you walk and find the suggestions of a path now and again. I headed in a direct line for the bridge over Abhainn a'Ghiubhas Li at which point I had a long stop for a drink. It was the first time for awhile that carrying little water and drinking on the way had caught me out as there is not water on/near the ridge and it was a very warm day.

A path is then picked up on the north side of this stream. By the time I got back to the forest line, a cloud had formed in my mood given the amount of peat I had negotiated for the previous hour. Since the legs still felt good I decided to put the effort in to climb the 70m up the forest track which made for good covering of distance although a bit dull.

Back at the car in 2 hours 15 minutes from the top of the last one and a round trip of 7 and a quarter hours. A good day in the hills but the views were the highlight of the day! Although seeing my second golden eagle of the year on Creag Dubh Fannaich was up there too!

That looks like an absolutely cracking day out and very inspiring.

Conditions were a lot better than the other walks posted for today so far. Well done.

Great report. I like the pictures of summits from other summits as when I read the route in my Munro book it is good to picture what is written down. Thanks for that, you had great weather though I think it is all about to change.

Looks a good day all round

- may be heading this way tomorrow if Cairngorms look cloudy.

You seem to have taken the same route as me a few months ago. I also took the "suggested route" on the way back after growing tired of the peat hags and boggy ground - the 70m ascent was probably an acceptable cost for dry firm ground

Great photo's! Some of the rocky bits look like a true ankle breaker! But thats all part of the fun and excitement and I know the pooch would love it!