Looking back at the summit from the track on the way down. Ready for a coffee now.

Amazing day out with the kids. Couldn't have asked for better weather, considering its February!

Parked in a passing place near Auchnahannet and followed a track as close to the summit as we could before heading out over the heather to the summit. That ascent was hard work over boggy ground and some knees to chest vegetation, and complaining kids. To their merit they beasted it out to the trig point on the snow covered summit.

Views from the top made the ascent worth while. Ben Rinnes to the east, Dava Moor to the west, Moray Firth and Ben Wyvis to the north. But it was the view to the south that was the most breath taking, Spey Valley and the snow covered Cairngorms. Absolutely incredible.

After a quick bite at the summit we headed down over the heather westward toward the southern edge of a small hill named Sgor Gaoith. Quick stop beneath the tree and down the hill to a track. Kids were much happier to be moving over easier ground now.

One of two Huntleys Caves is marked on the map here but we couldn't find it. We followed the trail south to the Tarmac road and back to the car. Then into Grantown on Spey for a well earned coffee/hot chocolate before driving home. 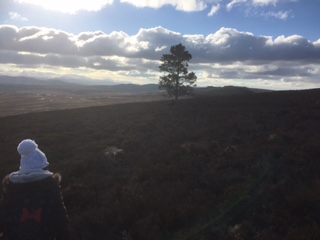 Having a break on the way down. Incredibly this lone tree is marked on the map. 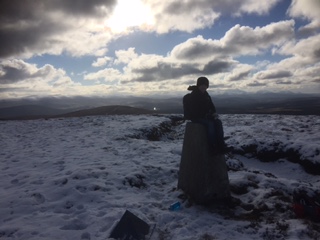 Looking south into the Spey Valley and onto the Cairngorms. Worth it for this photo alone. Getting a wet bum with Ben Rinnes in the background Almost there. They hate me just now, all their friends are at home playing their xboxes Some icicles, before the kids picked them and started knife fighting with them Looking south to the Cairngorms before leaving the track