Given the guide says that navigating between Beinn Dubhchraig and Ben Oss can be tricky in poor visibility these were two hills I was saving for a good weather day. The weather forecast was favourable for visibility but the wind had picked up considerably

I parked up at Dalrigh and headed off. 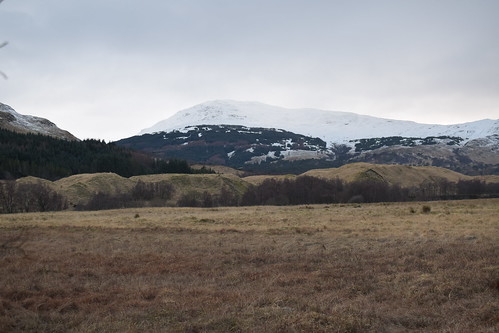 (View from near the car park) 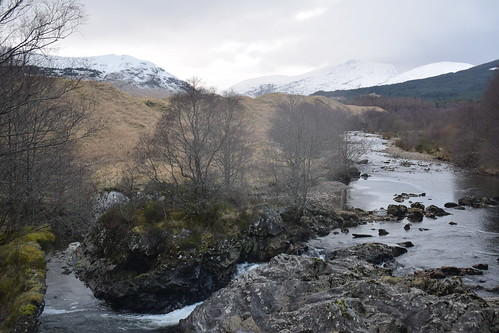 I crossed over the stone bridge over the river Fillan and headed up the rather icy farm track.

As I went over the railway bridge I was aware of another walker close behind, so I slowed down so he's catch me (well catch me sooner that he would have otherwise) and we agreed to go up the hill together.

Finding somewhere to ford the Allt Gleann Auchreoch was tricky as the rocks standing clear of the water were so sloppy from the ice. After a bit of searching we both made it across relatively dry and found the path on the far bank.

The frozen conditions meant the bogginess of the path was not too much of an issue, but there were still areas where the frost/ice would not take your weight and your foot would disappear. 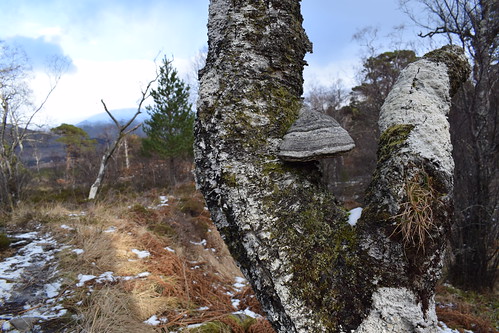 Through the woods we go. 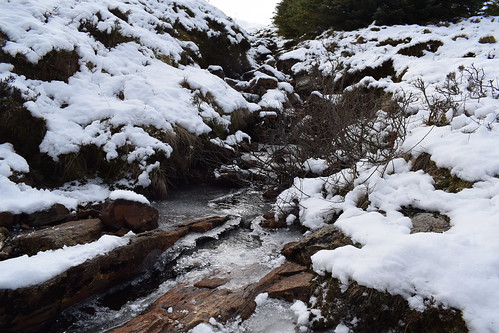 There were a few wee burns to cross and again the stones were very sloppy and care needed to be taken. 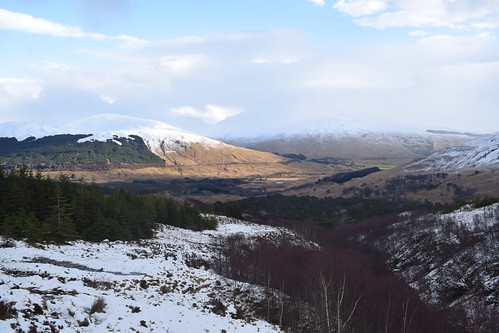 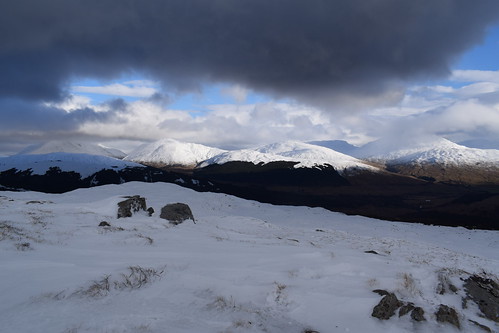 The higher we got the deeper the snow was. In places the surface was firm so your foot did not sink down much, but the crust would often break and your foot would sink half way up your shin or to knee depth. 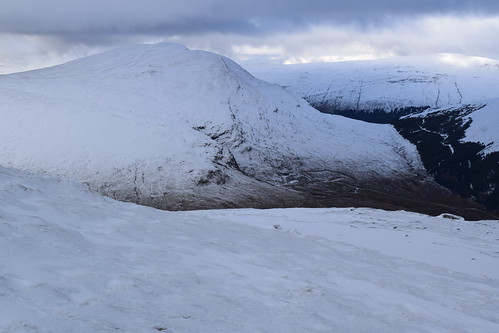 Looking down to the gold mine.

Once up on the shoulder of the hill the wind started to buffer us and turning east at the lochan to make the summit of Dubhchraig meant you were going into the teeth of the wind. The fact the cloud had cleared and there was brilliant sunshine was some consolation. 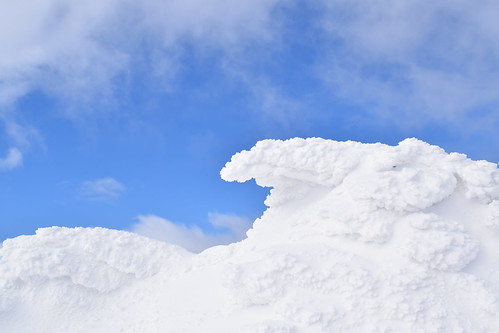 The summit cairn had become a snow wave. 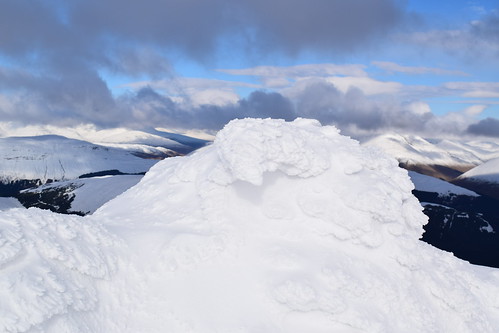 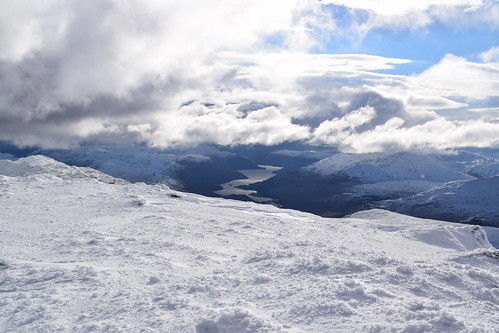 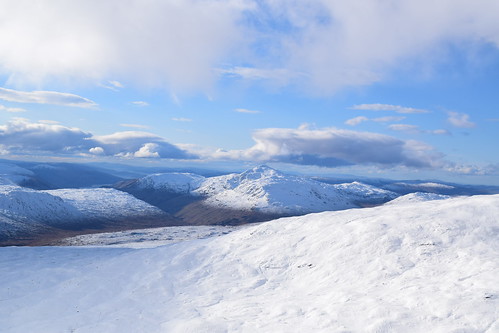 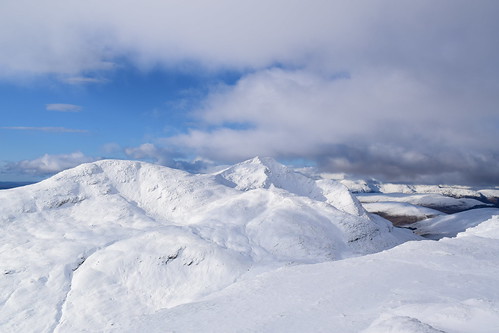 Looking over to Ben Oss with Ben Lui (Beinn Laoigh) in the background. The white of the snow means they almost look merged together. The north corrie of Be Lui filled me with both awe and fear!

My left knee and hip were sore by this point and I considered just heading back down when I retraced my steps to the loachan. But bolstered by a bit of food I headed on. The route down to the bealach is steep and full of rocky outcrops. 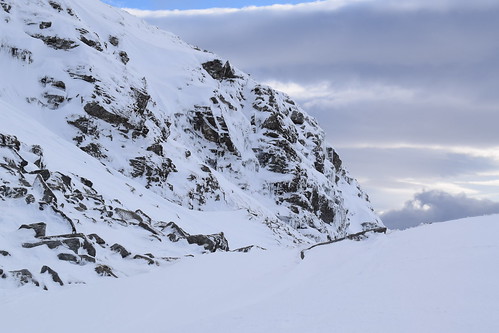 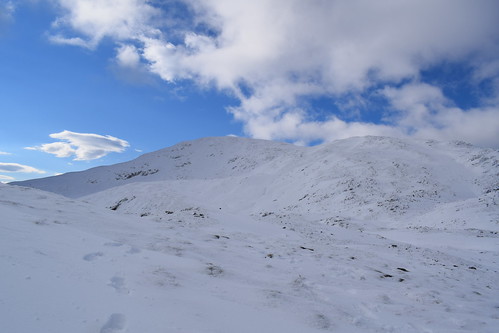 Looking up to Ben Oss from the bealach - the height that was left to climb was dispiriting but I headed on for about 1/2 a mile before deciding that it I made it to the top my knee and hip would be in no condition to get me home again.

I bit farewell to the guy I'd been walking with and headed back up the steep slope I'd not long come down to find the loachan and head back down the way I'd come up. 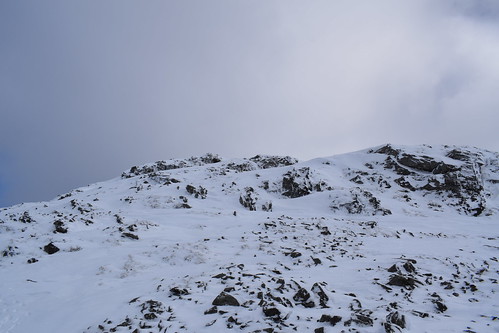 The way back up from the bealach.

Once back at the car I headed to the Tyndrum Inn and enjoyed a rather nice and rather big curry. 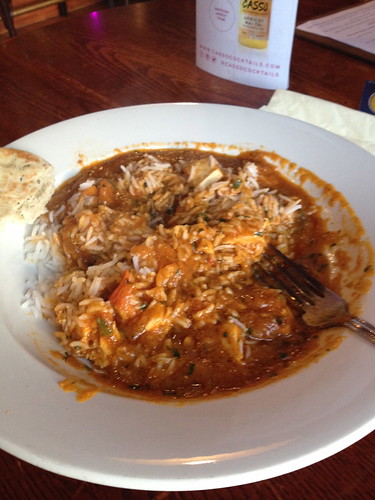 Benn Oss will just need to be tackled another day!

rockhopper wrote:Good conditions to pick for a boggier walk if frozen over - nice day for it - cheers

Aye it was a great day, just wished my knee and hip had not become sore and I'd the energy to have got to the top of Oss. However, Oss will be there tomorrow and the days after that so I plan to return for another go at some point.