You know you're in love with hill walking when on Valentine's Day, instead of a lie-in or a trip to a nice restaurant, you drag your partner to the Kilpatrick Hills! We used the same route as walkhighlands suggests for the outward route, but returned the same way as in the excellent report by Marty_JG here.


Duncolm.gpx Open full screen  NB: Walkhighlands is not responsible for the accuracy of gpx files in users posts

This must be one of the easiest walk start points to get to - a big (free) car park with Kilpatrick train station next door and various bus routes passing close by. Plus it's only 15 minutes walk from our house - surprising we haven't been here before really. Under the maze of slip roads forming the north end of the Erskine Bridge and straight into the countryside. It was a lovely sunny day, though very hazy (we'd hoped to get above the haze higher up, but this didn't really happen). The Erskine Bridge was already vanishing into the murk despite the roar of traffic being blown over on a strong easterly wind. Add in the noise of planes taking off from Glasgow Airport across the river and it wasn't exactly a quiet day At first the track climbed fairly gently, with some interesting-looking crags on the uphill side and good views of the Clyde below to the left. A solitary Highland cow and a house with a view: A friend recently told me that this track is also known as "Heartbreak Hill" (again, not really appropriate for 14th Feb...), not because of love lost, but because it'll give you a heart attack. It hadn't felt too bad so far but there's a sting in the tail as it bends right above Haw Craig. Good excuse to stop for a rest: We'd been looking forward to getting into the shelter of The Slacks as we turned north. Instead it was even windier here with gusts being funneled around the side of the ridge. After passing various vehicles and people carrying out reforestation (?) work, Loch Humphrey came into view. There were a few new tracks around here but it was easy to work out which one is the correct one to follow. Beyond the loch it soon narrowed to a good path, and then a soggy one, with the ground no longer frozen except in rare shady spots. Nothing too serious though, as long as your prescision jumping skills are up to scratch. The topography's quite interesting around here with several little humps and ridges to pick out. The path followed the crest of one of these towards Little Duncolm. Middle Duncolm is the hill in the background, with Duncolm itself looking a long way away. The path skirted the left side of Little Duncolm then splits, with the right fork running over Middle Duncolm and the left branch keeping to the side of it. We opted for the former - steep going with a few snow patches still, but a great view of Duncolm from the top: 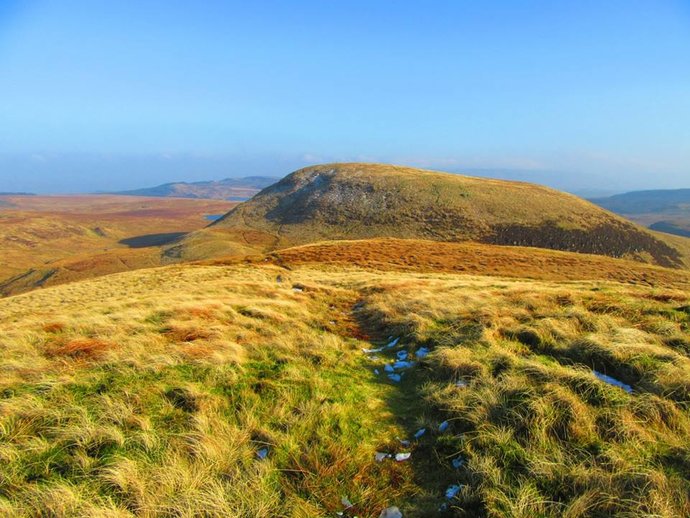 Back down before the final ascent to Duncolm itself. A decent panorama from the trig point though all of the high hills to the north invisible due to the haze. Southwards for the return now, with our fate resting in the hands of Marty (well, not entirely). The clearest path was, at first, a little way back from the fenceline, before moving closer to the fence after a steepest section. Looking back at Duncolm: This is a wetter path than the outward one; however, the worst bits weren't any more serious than the outward route (there are just more of them). The trajectory is generally downhill, with a small burn easily crossed midway. Behind, the three Duncolms were laid out in a neat row, showing the earlier part of the circuit: The path leads into a little hollow, unattractively named Dirty Leven. A couple of streams converge here and looking at the map it had all the ingredients of a boggy mess. We were therefore pleasantly surprised to find the path quite dry here, with the burns easily crossed. Dirty Leven: The path headed along the east side of the reservoir with one more burn to cross - generally dry going along here. More lovely views here, though quite a lot of litter in the water and a rusting, collapsed fence most of the way along. The path meets with a track by the reservoir dam - we met another couple here who had (presumably) come up from the Faifley side. After crossing the dam it was time to ascend The Slacks. No more bog from here onward, making the ascent quick and easy. View back to the dam: After getting over the excitement of visiting two trig points in one day, we followed a path (others are available) south from the summit across a strange area of alternating ridges and hollows. Onto the final descent for the day, with a left turn to look out for further down. Still as hazy as ever, but easy walking on a nice little path: The path joins a track close to a little waterfall: From here it's just a case of following the track all the way down until it rejoins the outward route just north of the A82 - a few paths cut out some of the zigzags. More interesting scenery than the map suggested today, and our bog fears weren't fully realised. I wonder what excitements Valentine's Day 2018 will have in store? Ben Chonzie perhaps?

Re: Valentine's date with Duncolm

It's a nice little hill this, despite the slightly ugly start next to such a busy road. You certainly had a cracking day for it, by the looks of it.

Re: Valentine's date with Duncolm

PeteR wrote:It's a nice little hill this, despite the slightly ugly start next to such a busy road. You certainly had a cracking day for it, by the looks of it.

Yes - have avoided it in the past as I wasn't sure how interesting it'd be, but glad I did in the end. The wind direction didn't help with the noise, but I think it'd be quieter normally.

Glad you liked the report & my route was of assistance.

You managed to get back in day light which is far more than I managed.

Marty_JG wrote:Glad you liked the report & my route was of assistance.

You managed to get back in day light which is far more than I managed.

The route was excellent - always more interesting to do a circular walk.

We did have the benefit of a few more daylight hours!

No disrespect to Glasgow but surprising to see something so wild looking so nearby.

litljortindan wrote:No disrespect to Glasgow but surprising to see something so wild looking so nearby.

I walked up there last summer and said the same exact thing. I even seen a grouse up there, something I didn't expect.

litljortindan wrote:No disrespect to Glasgow but surprising to see something so wild looking so nearby.

teaandpies wrote:I walked up there last summer and said the same exact thing. I even seen a grouse up there, something I didn't expect.

Yep we saw a few grouse as well.