Yesterday I climbed Ben Chonzie starting from Loch Turret Dam. It was my girlfriends first munro.

We headed off just after 7am and were at the Dam car park by 8:45. Nice and easy to find this time so no repeat of last weeks fiasco. We chose Ben Chonzie as its supposed to be an easier one and we wanted to guage how fit/unfit Lynn was. With all the reports of this munro being boring etc from the otherside the Loch Turret direction seemed the obvious choice and we were not dissappointed.

It took us 3 hours up and 2.5 hours back down. This was slower than my usual pace but on the up side it prevented my knee injury from swelling up and ended up being my first munro that I havent been limping on the descent.

The weather forecast said it would be dry and party cloudy but there was alot of rolling mist about. 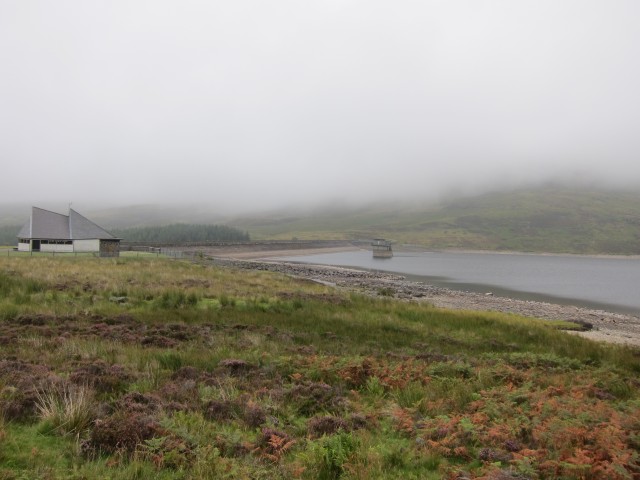 Looking back towards the dam 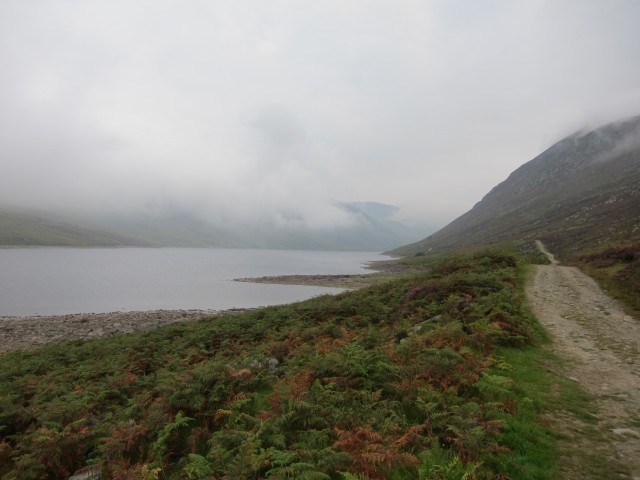 Our first glimpse of Ben Chonzie 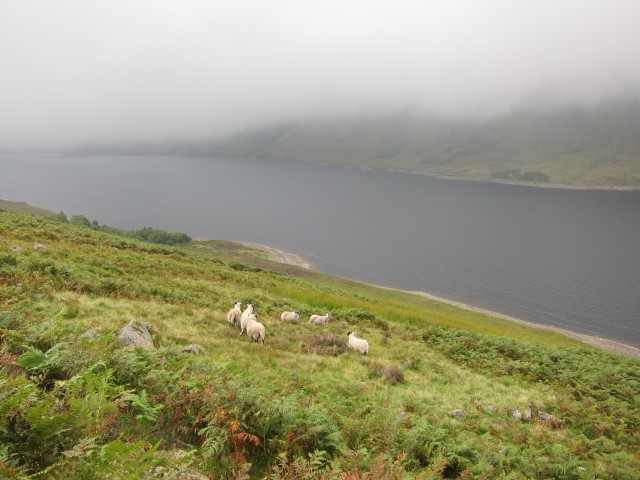 The walk up the lochside is quite straightforward and once you reach the end you continue on the same path until you reach what looks like a concrete garage base beside an upper pool. 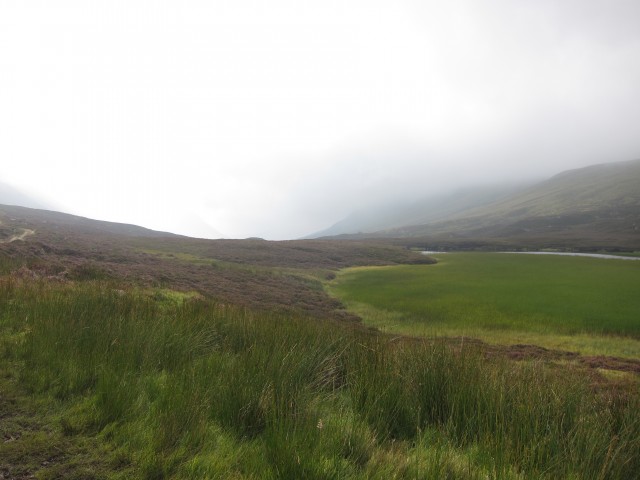 The path now splits right and left. We decided to take the right hand route and up onto the ridge with the aim of returning on the left hand route. 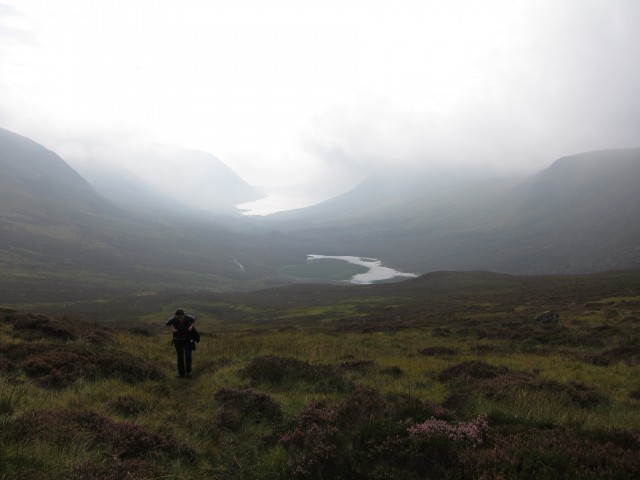 At some points of the ascent the path was very unclear and we found ourselves heading in the general direction but making our own path. Every so often you would rejoin a faint path and then lose it again but we were soon at the summit without too much drama. Unfortunately it was a total whiteout 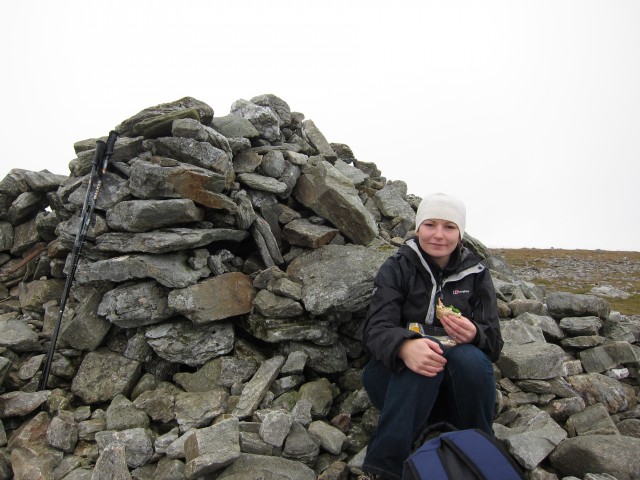 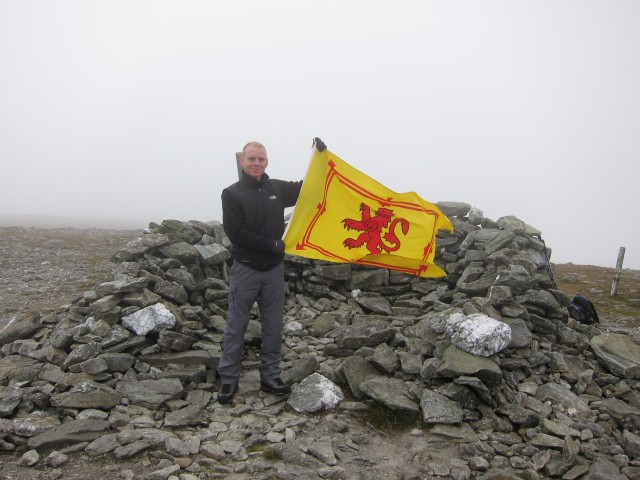 On the way back down we attempted to come down what would have been the left hand route but could not find the path at the top so instead we took a sort of direct approach towards the garage base in the distance and made our own descent route. It was actually quite good fun being off the beaten track as it were.

So was Ben Chonzie boring ?? - Not at all. It was a nice walk up the Loch and the ascent/descent were interesting too. On top of that we spotted 2 hares, 3 frogs, lots of Grouse, sheep (dead and alive), and this little guy - 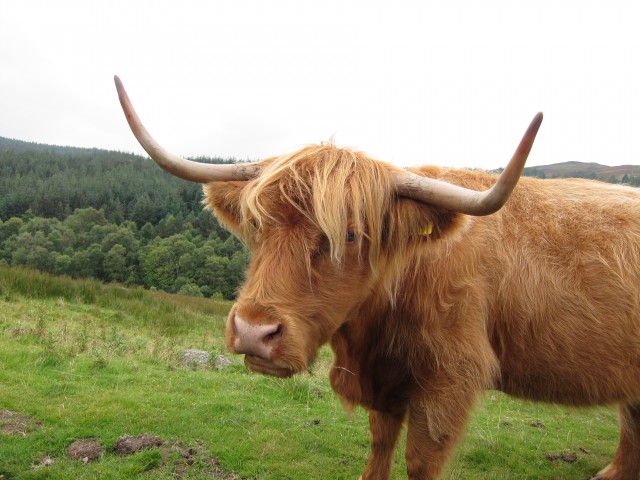 All in all a good day out and good for Lynn to get her first munro under the belt. Roll on the next one

Well done on your girlfriends first Munro, hopefully the non existent views in the mist wont put her off the rest.
Bit close to the coo at the end, or have you got a super-zoom?

They were actually lining the single track road leaving the dam car park. I had to slow down to crawling pace so as not to startle that one but it wasnt phased by the car so I took a photo of it from the open car window.

A few more pics of them - 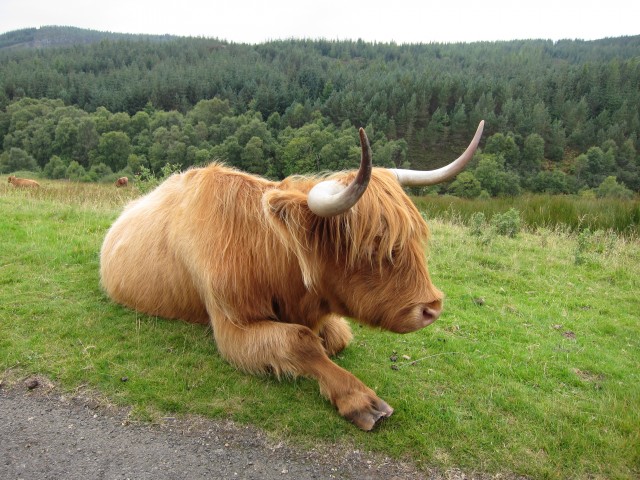 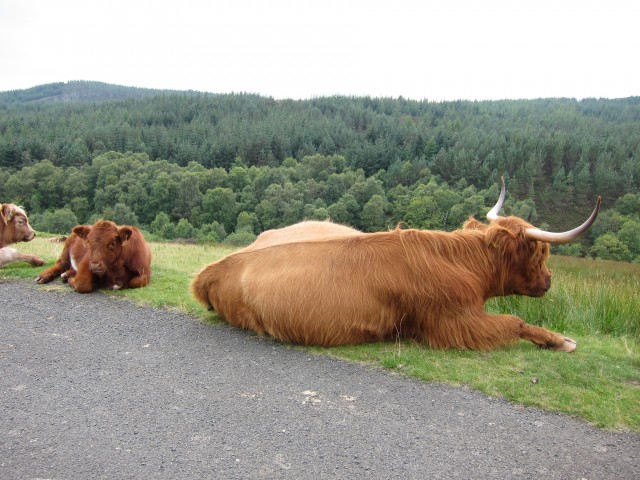 I agree that the walk from the loch turret reservoir end is cool and saw some good views of glen almond once you headed
around the 'corner'. Unlucky with the weather. I had a fine day and also, like you, saw plenty wildlife -butterflies , toads, eagles and 2 young dear and and an older buck. An interesting walk back and better than going back via the south side of the reservoir as its very boggy and loads of peat bogs. Well done to the lady...what next now?

Sitting here just now with my smc Munro book and this website trying to plan what one to do next Saturday. Thinking Ben ime and beinn narnain but unsure if it's too much of a step up from chonzie for Lynn. I think she will be fine though, and worst case scenario we call it a day after the first one.

xpfloyd wrote:They were actually lining the single track road leaving the dam car park. I had to slow down to crawling pace so as not to startle that one but it wasnt phased by the car so I took a photo of it from the open car window.

I was up Loch Turret Last Monday, those coo's must've made the road their new home!I had to drive half on the grass to get round a couple of them were unconcerned with making way for me. They seem quite placid though.