Sub 2000' hills included on this walk: Craigendarroch, The Coyles of Muick


Harvey's walking day. GordonC ditched his DIY job to come too.
Drove up to Ballater passing some red kites cruising around, then up Glenmuick.
Shock - horror ! A big "Road Closed" sign reinforced by a row of earth-filled bags across the access road over to the Mill of Sterin. Quick discussion on alternatives yielded a "park up and walk" decision!
Let Harvey out and kitted up - well partly - I'd forgotten my GPS & hi-res map, so resorted to the old ways of 1:50,000 map backed up by GordonC's new braw GPS. Further down the road near the River of Muick bridge, another row of black earth-filled bags straddled the road.
Jings, we thought, they're serious about stopping cars going down here - and with good reason - the road abruptly disappeared over a 10m drop into the burn - obviously washed away during the muckle spate. We back-tracked a few metres up the road and took a newly formed path down to the bridge, which seemed to be still in good working order. The muckle spate has eaten the road

Headed up the track to just beyond Altcailleach, taking the fork into the forest described by other WH-ers. There was indeed a huge parking area at the start of the forest track. ( not needed today )
Followed the ziggy forest tracks, passing a bloke in a digger maintaining roadside ditches. First view across the glen from the forest track

We came to the first firebreak leading to the summit -spurned by others (until their descent - thanks for the info ) and ascended by the right hand margin of the wood which GordonC picked a route through, making easy-ish walking - but no paths.
Reached the summit cairn and admired the views to Mount Keen & Lochnagar and up the glen to Loch Muick. 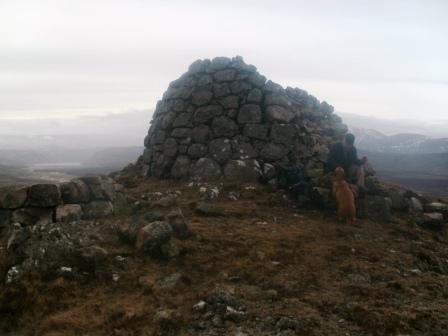 Harvey getting his summit reward on Coyles o Muick

Walked to the wee-cairned plook across the way, just in case, where Harvey had his moment of madness, running round in circles & taking shortcuts by loupin' across me, ca'n ma phone oot o ma haun' ! Great fun.
Spotted the work of a high altitude mole in the dip between the two tops. Didn't know they came up this high. Walking across to the plook of Coyles o Muick

Headed off down to the car then round to the Hilton " Grand Vacations " at Craigendarroch for our SMC-style Coffee and stickies intermission.
Fired up with Costa coffee, jam scone & carrot cake - having justified our "customer" parking place, we wandered round the hotel and up past the old ski slope to the path up Craigendarroch Hill. ( Can't believe I hadn't done it before, after all the times I'd been in Ballater and even stayed in the hotel for a week on a seminar ! )

A fairly steep ascent took about half an hour - again admiring views of Ballater that I'd never seen before. We rested on the bench before descending. Still the forecast rain hadn't appeared. 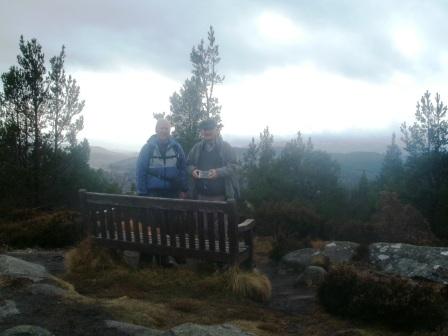 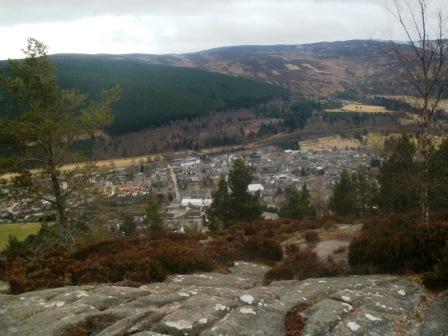 Braw view of Ballater from top of Craigendarroch We had a little nav malfunction on the way down where we followed the path down to the village for a wee bit before GordonC realised our up/down GPS tracks were diverging.
Back up the hill for a wee bit until we saw the Hotel path sneaking off down towards the car.
This confirms the mantra that Nav is usually just a series of error corrections !
A comfortable cruise back to Westhill to drop off Harvey for his well-earned rest & tea.

A great day out - all the better for the rain being late !

RTC wrote:Nice report. The "wee cairned plook" is the high point on the Coyles o' Muick, When I did it I parked at the entrance to a house but was moved on by a London bobby who looked as if he had been on duty all night. He was very polite and actually saved me a few minutes walking.

Thanks HB - GordonC enlightened me when his GPS showed it a few metres higher than the big cairn !