When Buchaille Etive Mor came into view from the A82 and i pointed at it and told my sister and my friend that this was the walk we were doing, i think they nearly had a heart attack!! It looks so intimidating from this angle!

As we rounded the hill a bit and I pointed up the corrie where we would be going up, it still looked pretty steep to me, but we set off anyway - just hoping it wasnt as steep as it looked! It was a fantastic day for it, but we made slow progress of it as it was so hot. I think we stopped and took pics every 5 mins, the views just kept getting better and also it was an excuse to cool down! As we got further up the corrie it really wasnt as bad as it looked, and only the very last 5 mins were tricky!!! I reached the top first and took the opportunity to snap the others finally reaching the ridge. We spent a good 20 minutes here taking photos before continuing up the ridge to the summit of Stob Dearg. From this point on it was pretty easy going compared to the initial climb up the corrie. Looking ahead to the summit

We reached the summit and were blown away by the views!! There was hardly a breath of wind, wall to wall blue skies and not many others about so we were able to spend loads of time taking pictures, eating lunch and of course, getting eaten alive by the midges!! The summit cairn with the Rannoch moor behind me at the summit 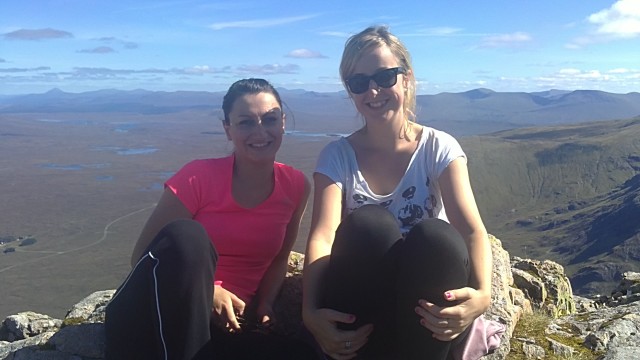 All that was missing was a nice cold glass of cider!
We eventually got going since we still had a fair distance to go, so we made our way back down and over the ridge towards Stob na Doire. After ascending and then going down the other side, we decided that we would leave Stob na Broige to another day as we had messed about a bit and it was getting on in the day. Ah well that gives me an excuse to come back up!! So we descended down the steep but fairly easy path down to the right and then headed back to the road. Back at the car we stood looking up at the mountain with our sore legs and felt great! We hit the road and stopped at the Drovers Inn for the most amazing burgers we have ever had in our lives, and of course a couple of glasses of that cold cider we had been dreaming about all day!!
Perfect end to a perfect day.

Looks like a glorious day out, one of best hills in Scotland in my book. It's certainly something you girls will probably remember for a long time, well done!

Wow amazing report, sure looked like a good day to be up in the mountains!

This one is high on my to-do list...maybe next year eh! Amazing views down Rannoch Moor and across to Ben Nevis...

This would be my idea of a perfect day too

That looks to have been a great day out. Fantastic pics of awesome views. The view over rannoch moor seems never ending. Seeing these pics makes me long for the day I can get to see Glen coe again.
For me taking lots of pics is an essential part of any walk,
A. to have a permanent reminder of my day
B. to bore others on here and Flickr with
C. it gives a valid reason to stop for a breather on steep ascents, especially in the company of fitter walking partners.

Sounds like a perfect day in the hills; a great walk finished with fine food and alcohol. Great report and some fantastic pictures with some amazing views. Nice one

fantasic photos and report. I still have to do this

Loads of ditto's from the comments above. I lok forward to this walk at some point in the future. Great pics. Hope your still smiling.

. No need to rush with weather like that - you may never see it better

- and you've got an excuse to go back for Stob na Broige.

Loved the pictures, looks like a great trip. Didn't realised just how flat and expansive Rannoch Moor is!

I dead jealous i have done this walk & loved it even though i could see nothing & the rain was bouncing of me last year. I went again in April with my son, whos 10, clear blue skys but a wall of ice & snow around the head wall stopped us from getting out of the corrie, but hayho.

Glad you had a good day.

Looks amazing view. You had some good weather for it. Nice one..

It doesn't get much better than that. Well done

could you tell me if this munro is dog friendly. Might try and get it done this weekend

palitoy wrote:could you tell me if this munro is dog friendly. Might try and get it done this weekend

Hi, we didnt fancy taking the dog but then he is a bit crazy and runs too far from us! We did see a guy with a dog, so it must be ok, he had it on a lead at the summit and then had taken it off a bit further down. I suppose it depends what your dog is like and if you can trust him to come when called!! (we cant!) I would be too nervous about the cliffs down from the summit personally

I met a girl with a black labrador when I was last up there and it didn't seem to have any problems. The headwall was snowy that day as well.