Red Cuillins in the Smoke

Red Cuillins in the Smoke


Plan A was for us to take our boys (4&2) up to Coire Lagan. They had managed to get about two thirds of the way up last October when I was off having fun up Sgurr Mhic Coinnich (my wife, she is a good one). We figured that this time with me to carry the wee one in the carrier and with plenty time, we could manage all the way up and have a clamber about at the lochan. Got down to Glenbrittle late morning where the sun was shining, the sky was cloudless..... and we couldn't get the doors of the car open for it blowing a total hooly. Then somebody took a big donaldtrump in their nappy, and it became clear that our plan was beginning to unravel. 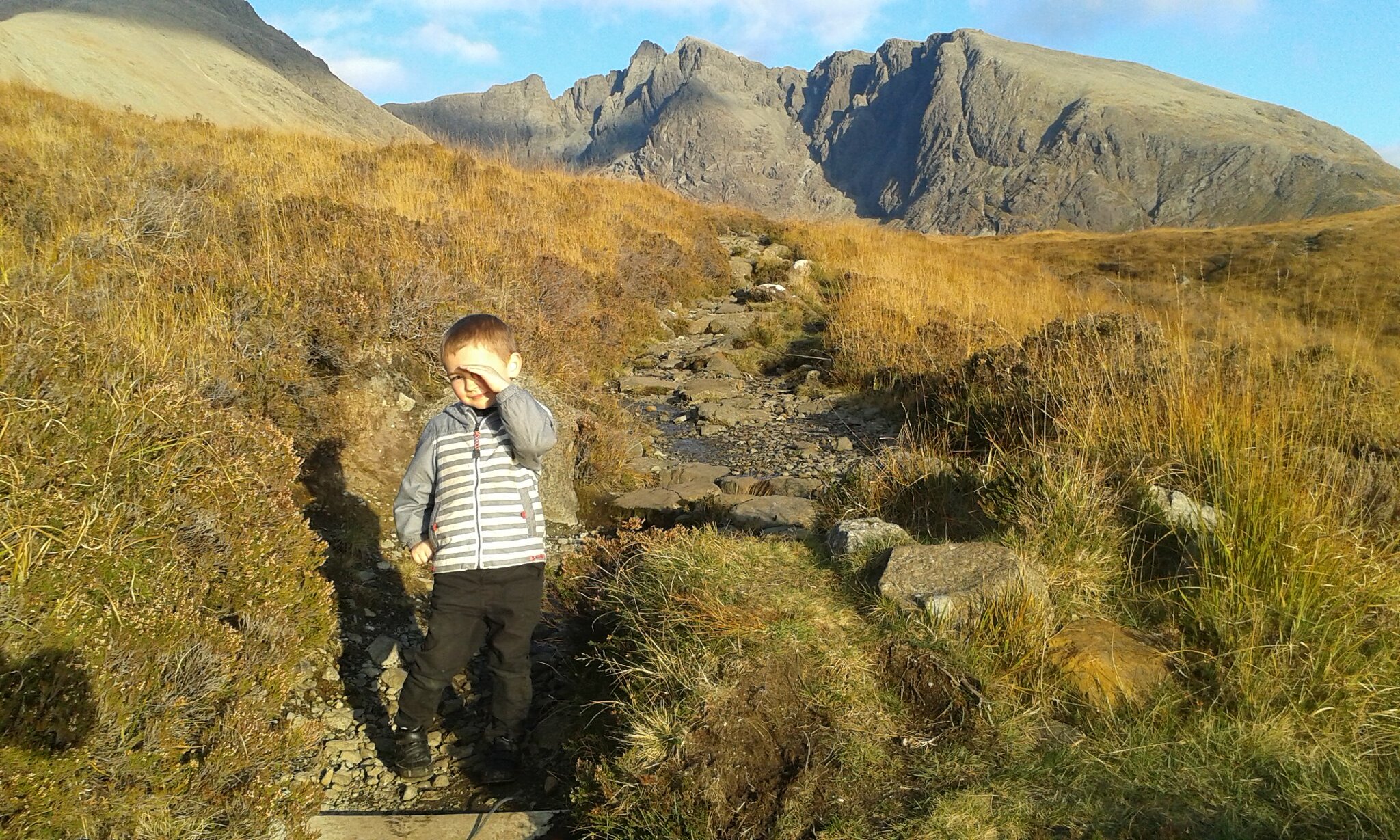 Admittedly (not at the time) a bit grumpy I drove us off back for Portree, for an afternoon of cartoons and naps instead. Driving back towards Slig, Mrs M suggested that I go for a wee walk on my own. A packed backpack in the boot ready to go, in the sun at Sligachan and out of the wind, Plan B was on - Beinn Dearg Mhor... 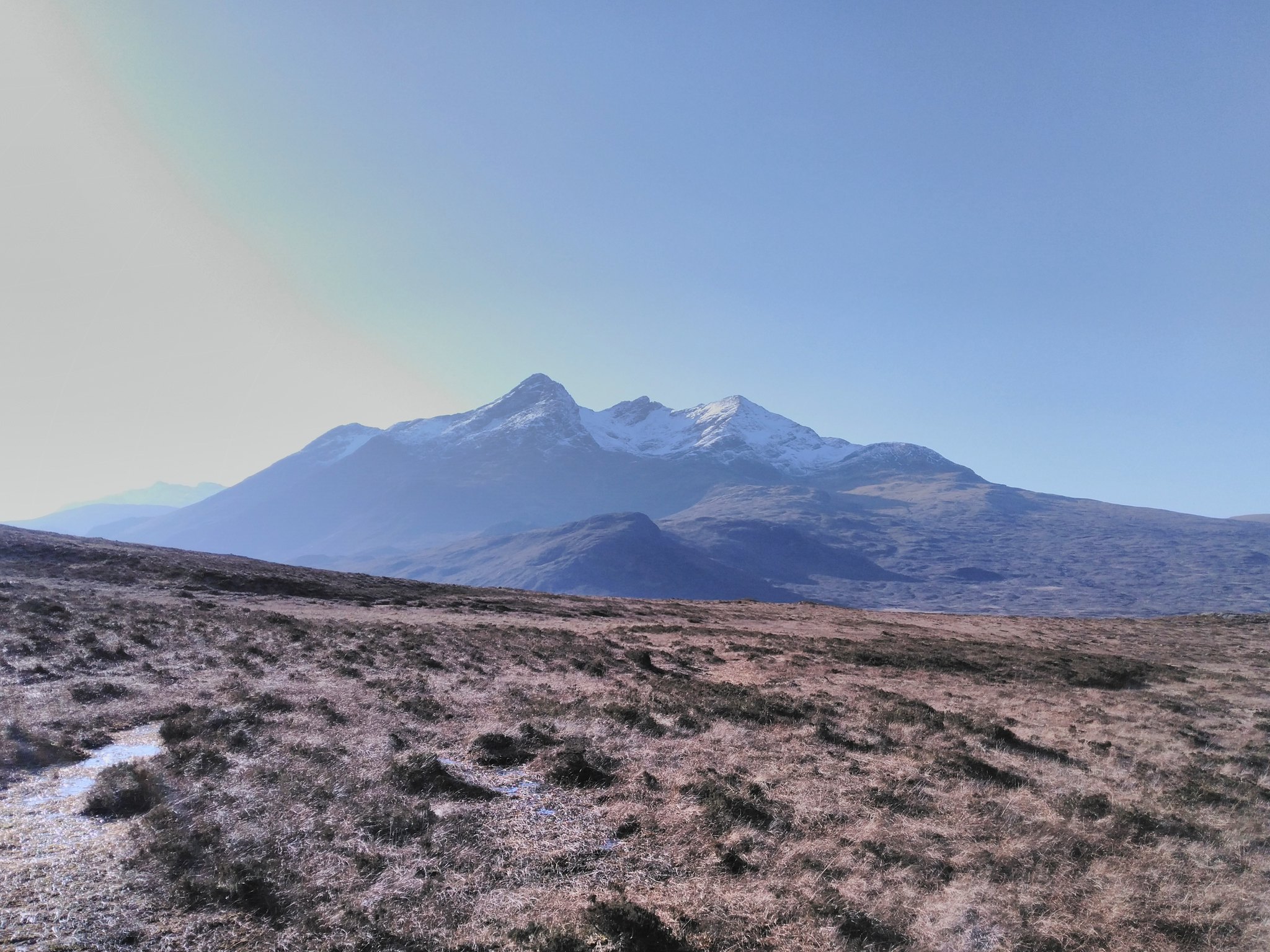 Looking across to Sgurr nan Gillean

My wife and I joined the John Muir Trust after a great experience at Sandwood last summer, which got us reading a bit more about their land on Skye, which includes the Red Cuillins. Towards the end of last summer I'd noticed evidence of path work about to be done on Sron a'Bhealain which can be seen from the road at Slig going up to the Beinn Dearg ridge, and it was clear that this had been completed. It hadn't rained for about a week on Skye at this point, so the ground would hopefully be dry too. It proved still to be pretty boggy in parts on the moor between the river and the nose of the hill, but nothing a running jump couldn't manage.

Going across the moor was lovely though. Warm t-shirt weather in February just a week ago seems unimaginable as I type this up a week later, sleet and wind outside as Storm Doris tries to live up to the hype.

Coming up on to the crest the views south down Glen Sligachan began to open out. 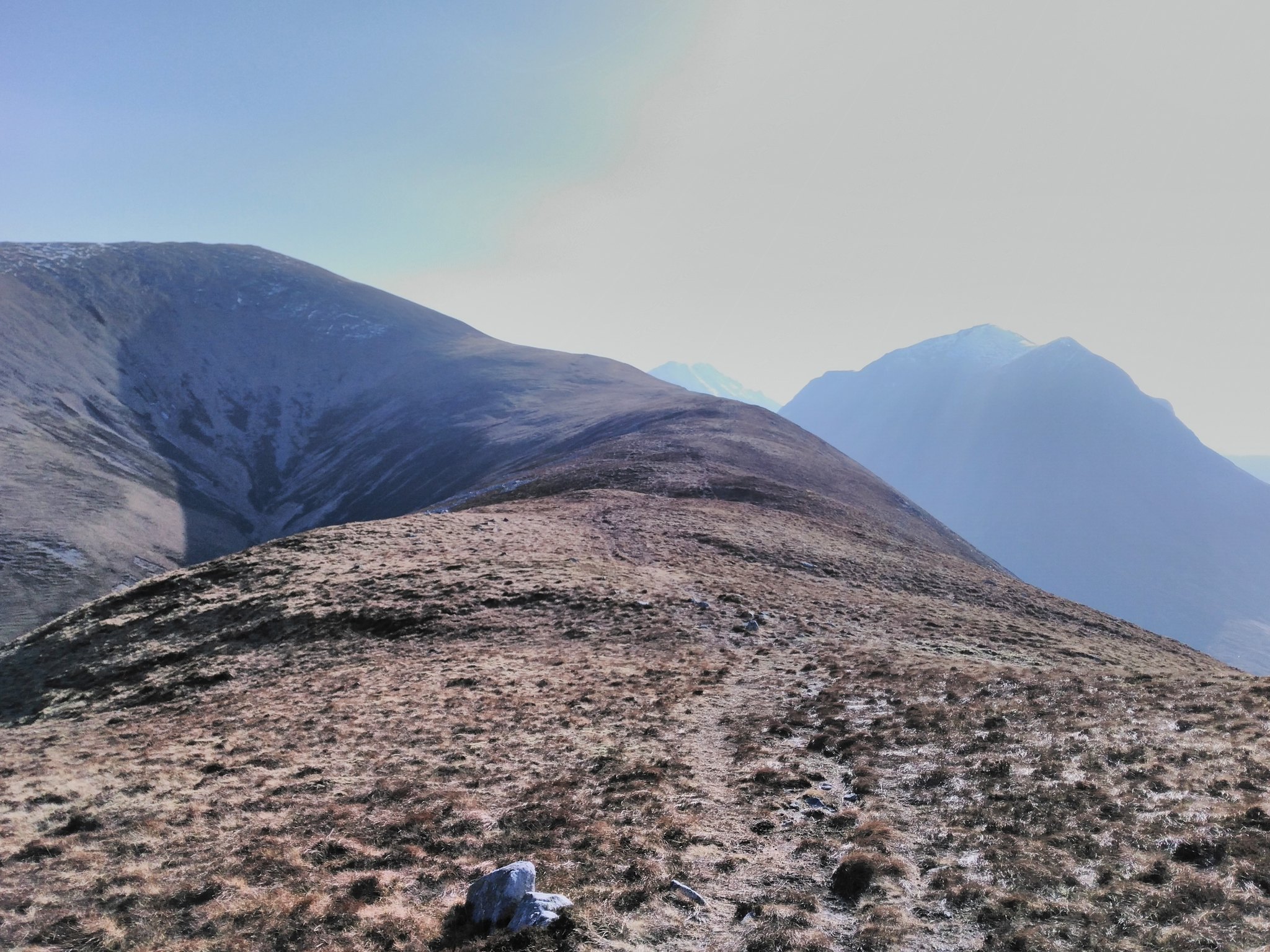 Up towards Beinn Dearg Mheadhonach first 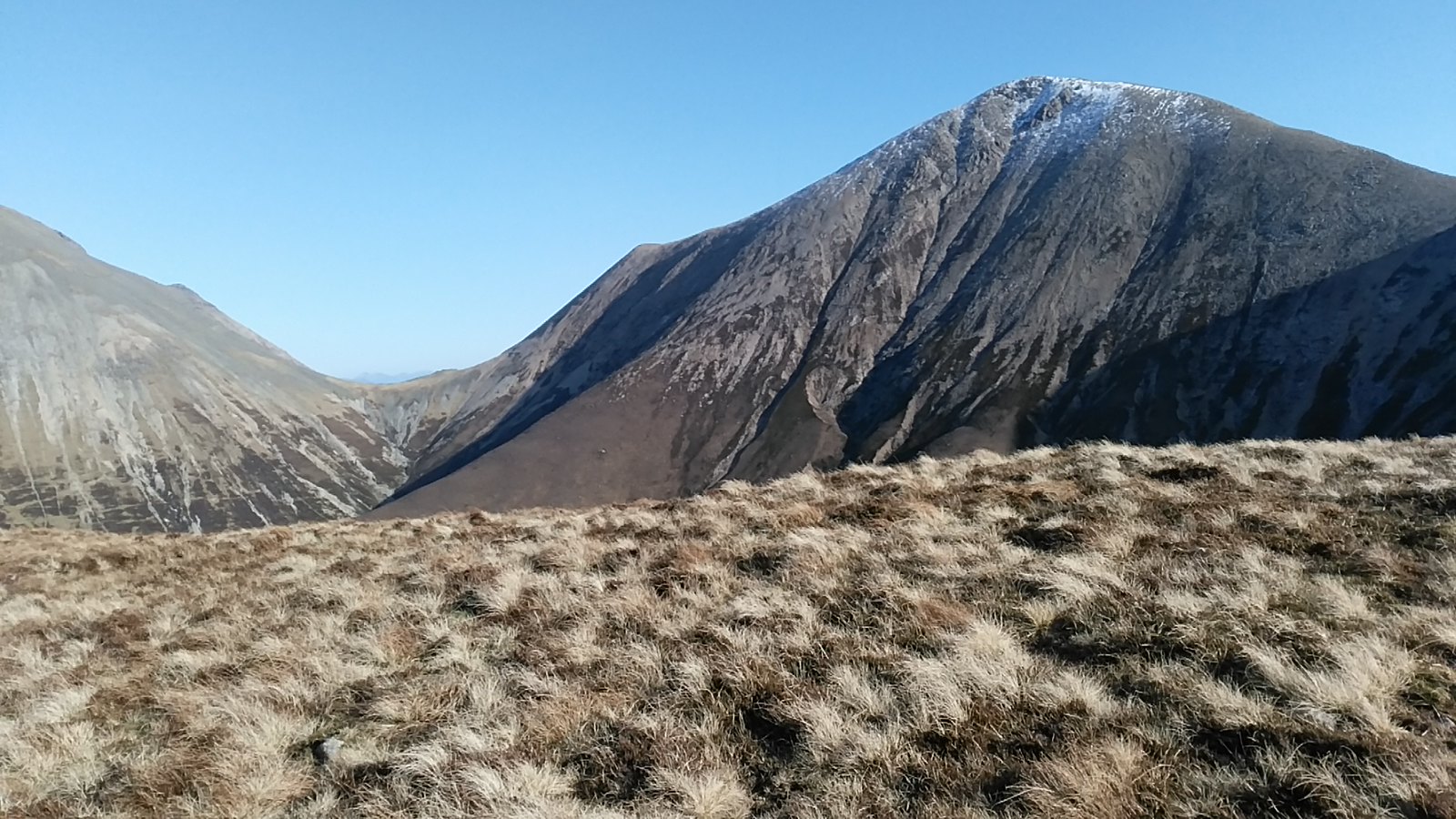 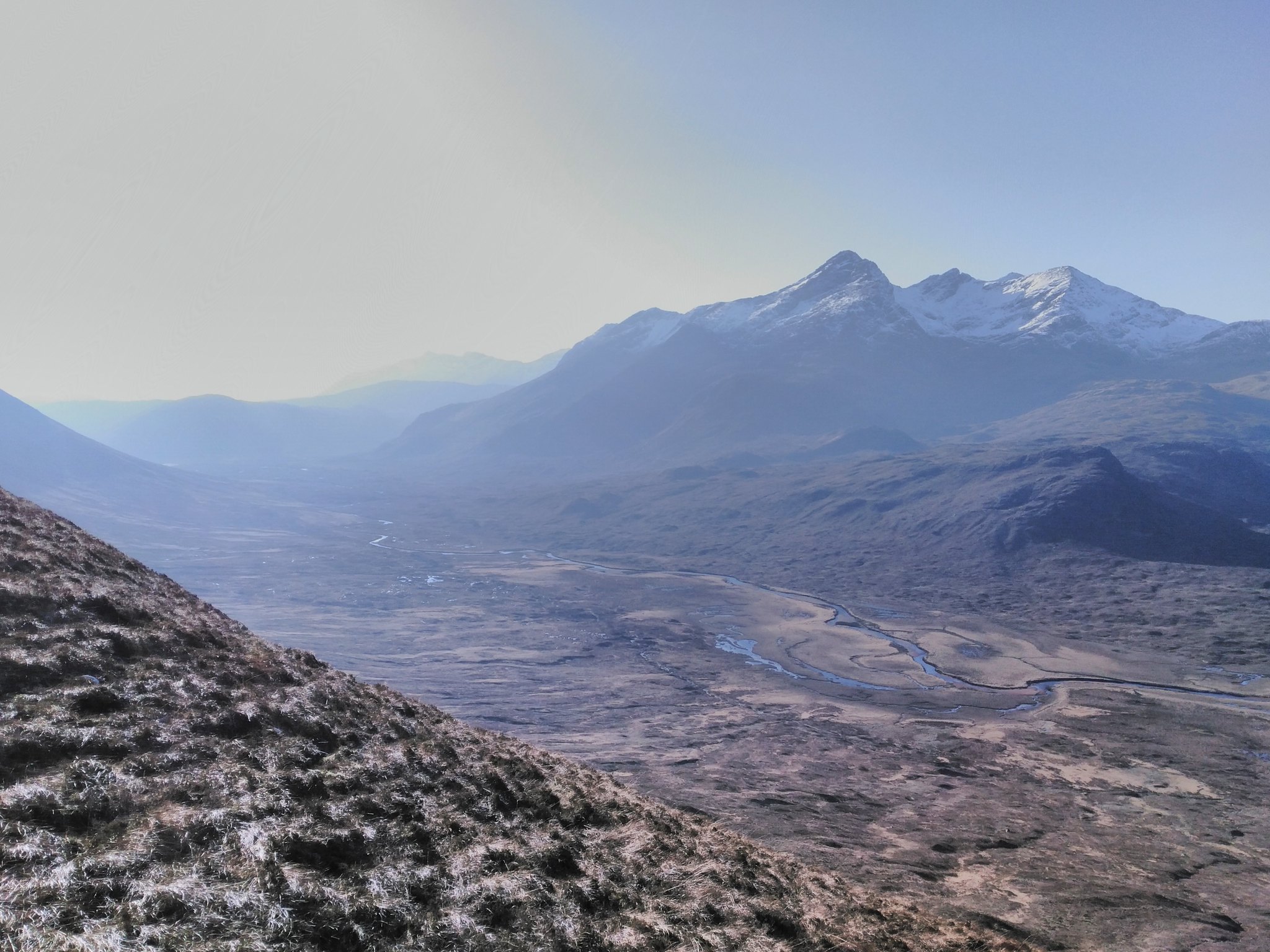 Hazy in the falaisgear smoke 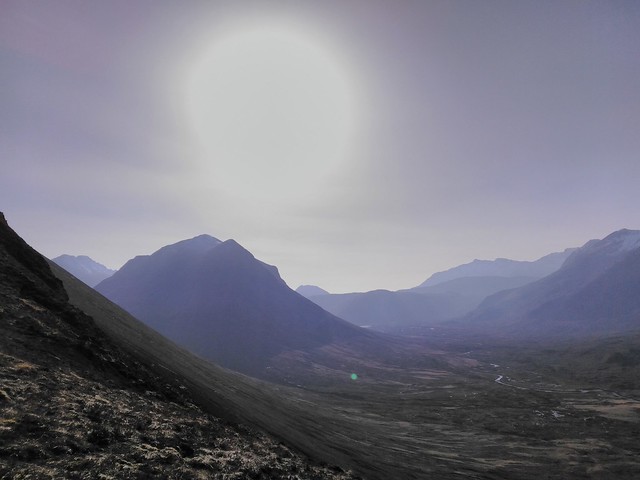 In the wind it wasn't so warm as on the moor, but I never needed my gloves. The smell of burning heather and the stiff breeze made for lovely walking conditions. The smoke gave a haze that I'd more associate with July, and it did mean that the views were a bit limited in their clarity and distance, so I didn't really take any decent pictures of the mainland. You could make out Beinn Alligin and the Five Sisters though. 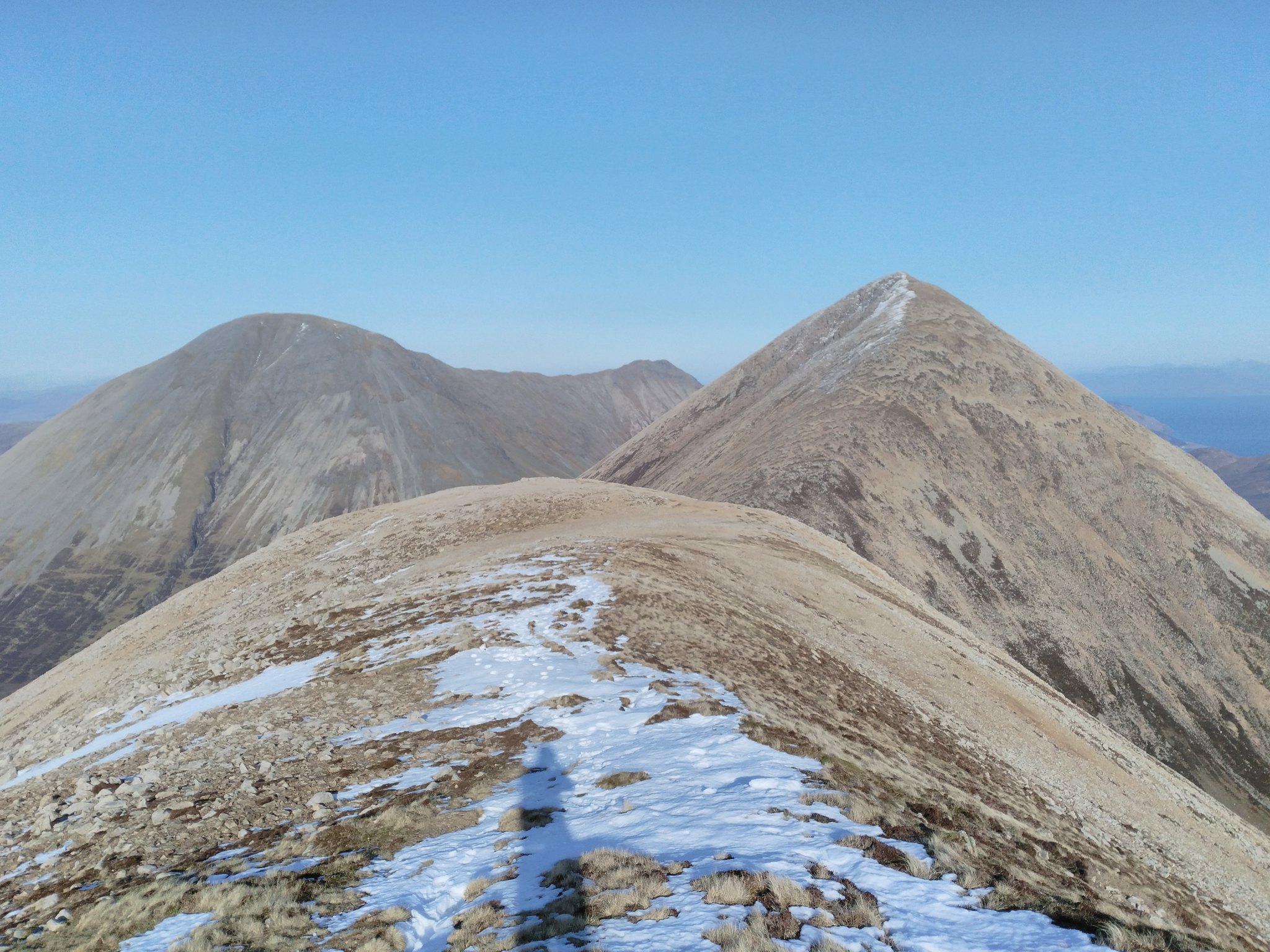 Looking north along the ridge.

From BD Mheadhonach there's drop down before the ascent of BD Mhor. It was on scree but not that arduous, no hands required - certainly nothing like Glamaig, a hill I have no intention of going up ever again.

The top of Beinn Dearg Mhor is a surprisingly dramatic summit, despite having seen it side-on so often from Slig or Drum na Cloich, I was quite surprised at just how steep it falls away, especially to the East. I met a group of folk on the top who were up from Devon for a week. Very happy for them that their gamble of a February trip to Skye and Lochalsh paid off so well. Their plan was to continue on down to the bealach with Glamaig before heading down and back to the car. But with the sun dropping lower and the best views behind me, I decided to retrace my steps.

The reascent of BD Mheadhonach was nothing at all, much gentler than going up either of the two slopes walked so far. I wandered along to the southern cairn, which is the highest point of the hill, and stopped for some pictures. The wind just dropped away so I sat down and just soaked up the views (and the smell). 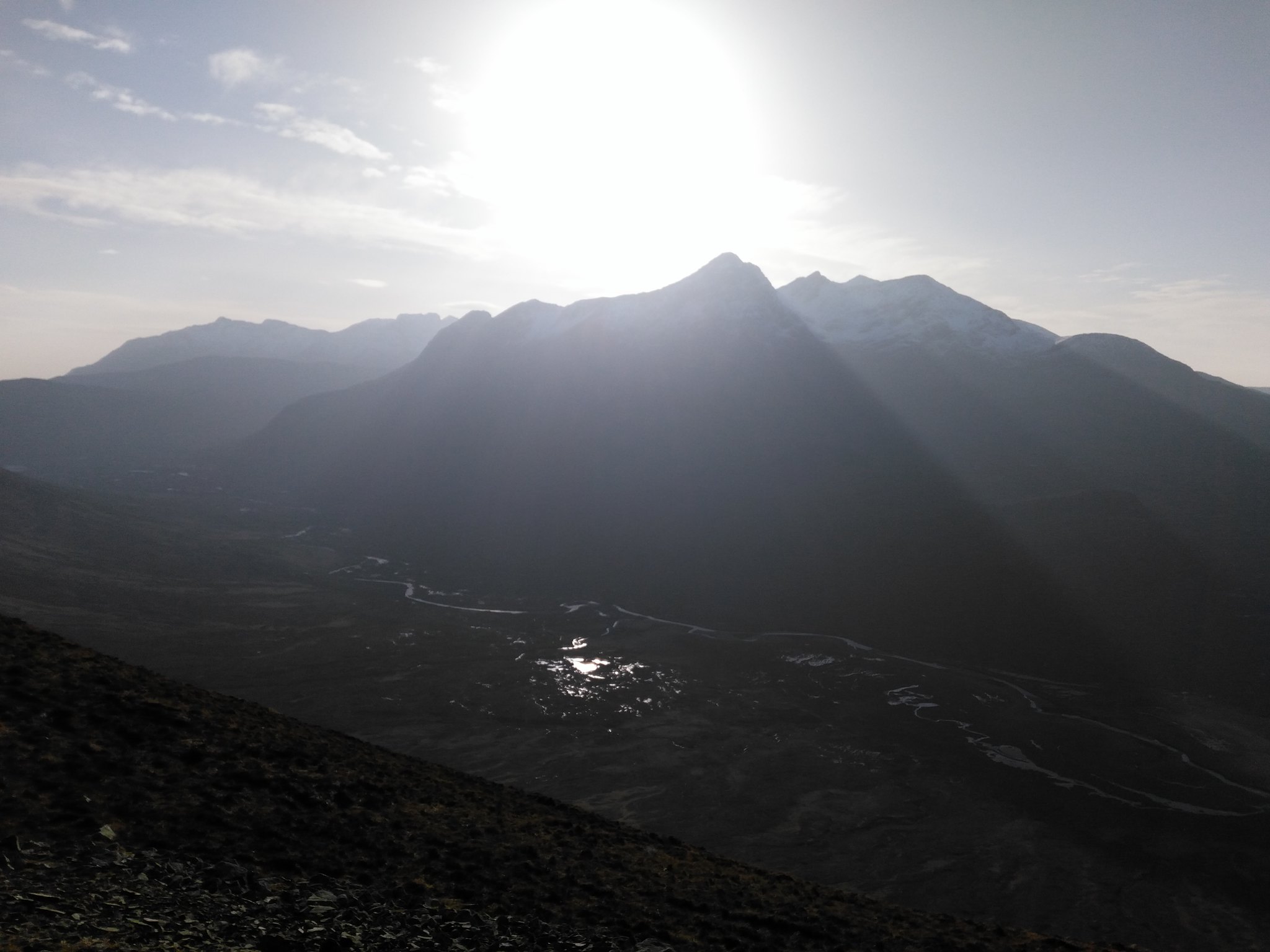 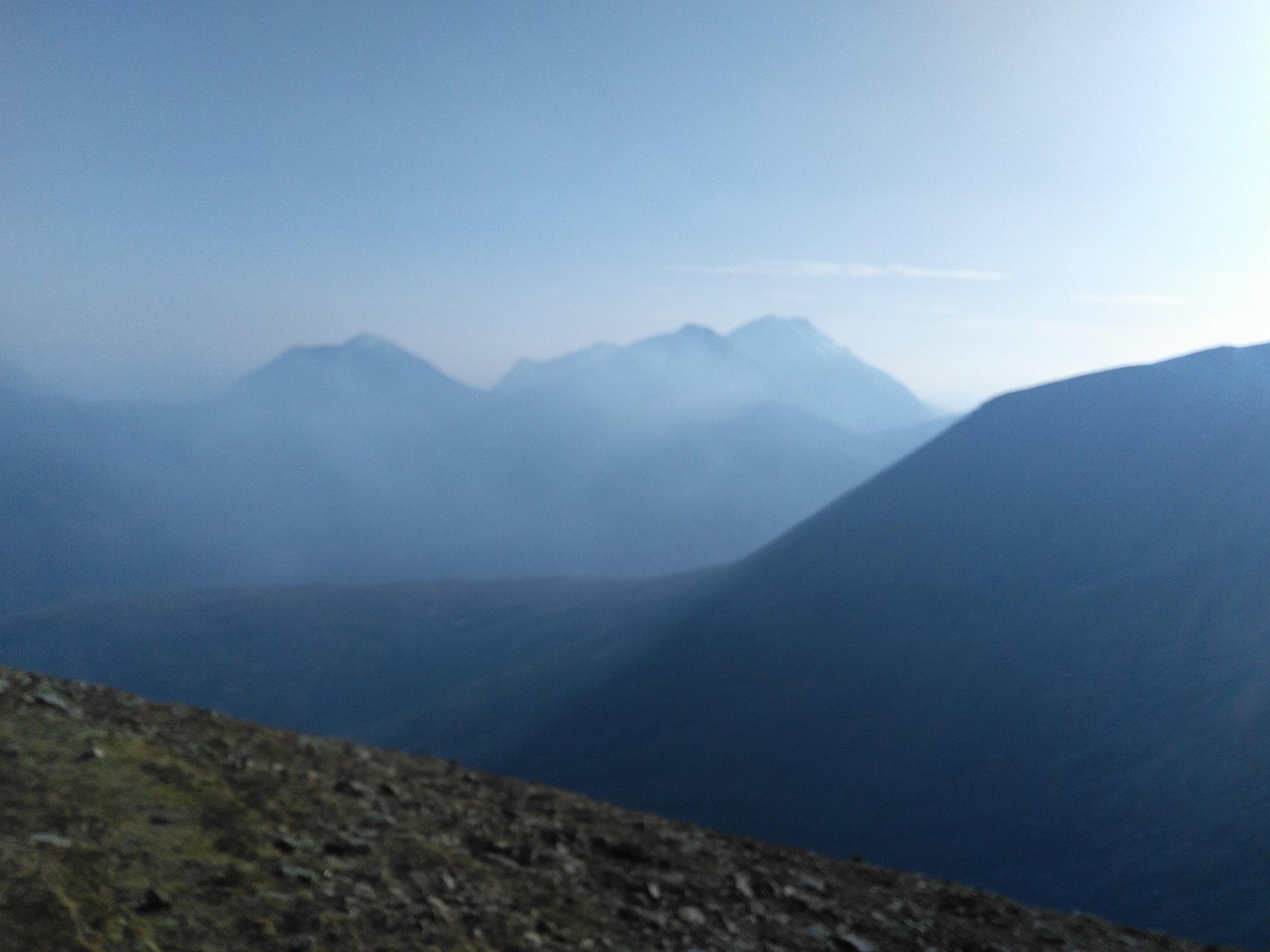 A bit blurry, but gives a good sense of the smoke 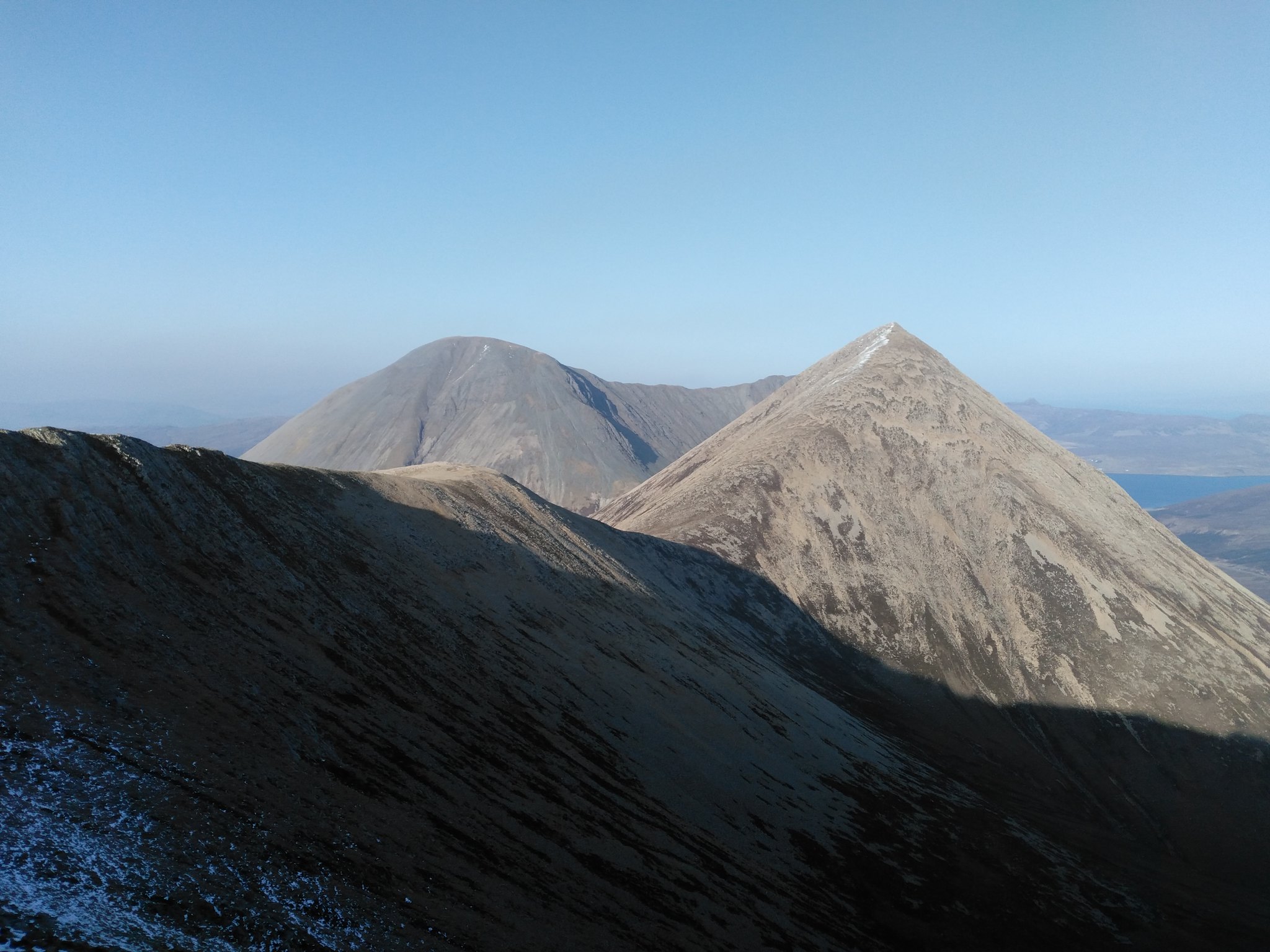 Back towards Beinn Dearg Mhor, with Glamaig behind. 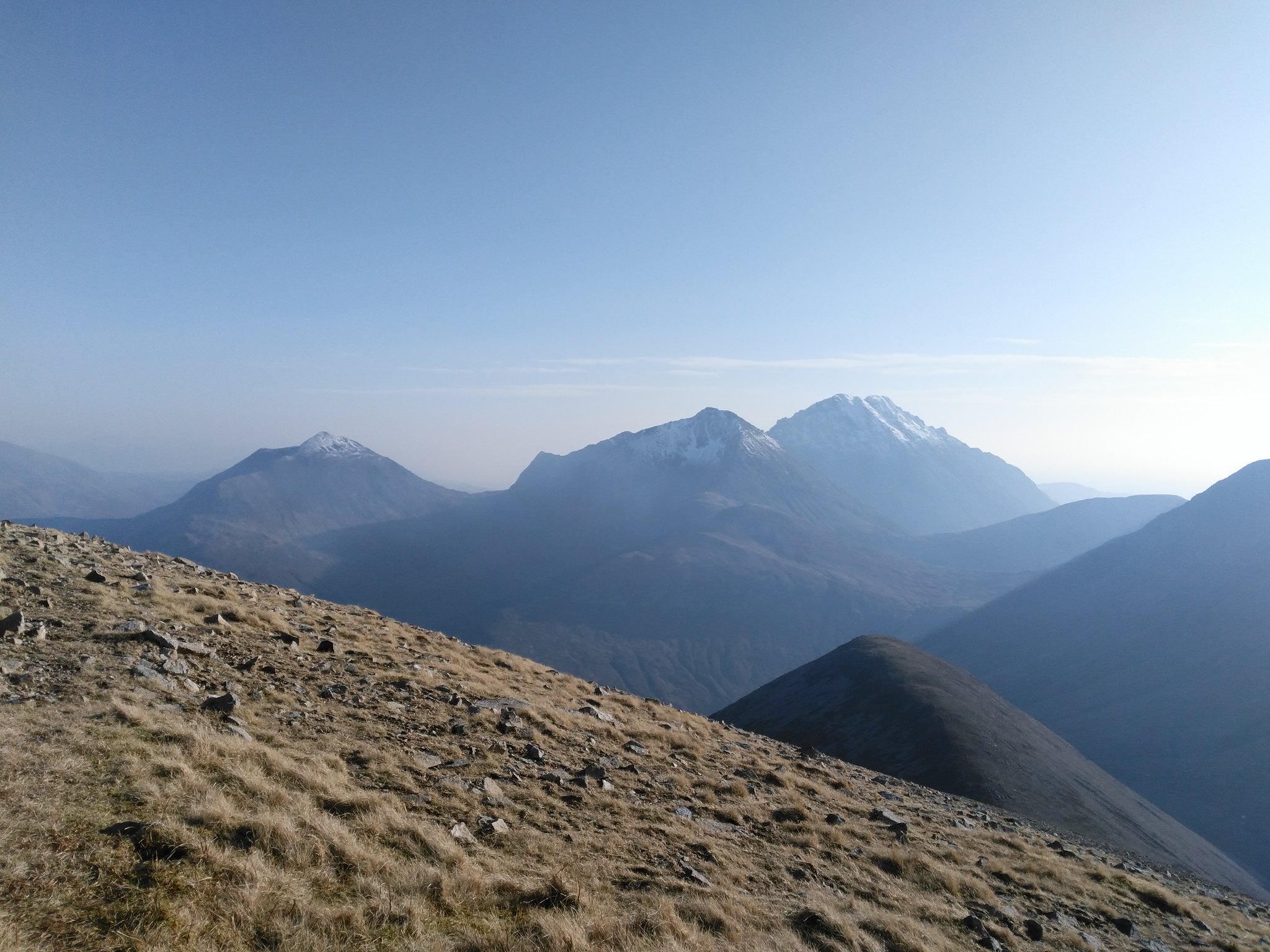 A clearer one of Blaven, Garbh Bheinn and Belig (right to left) 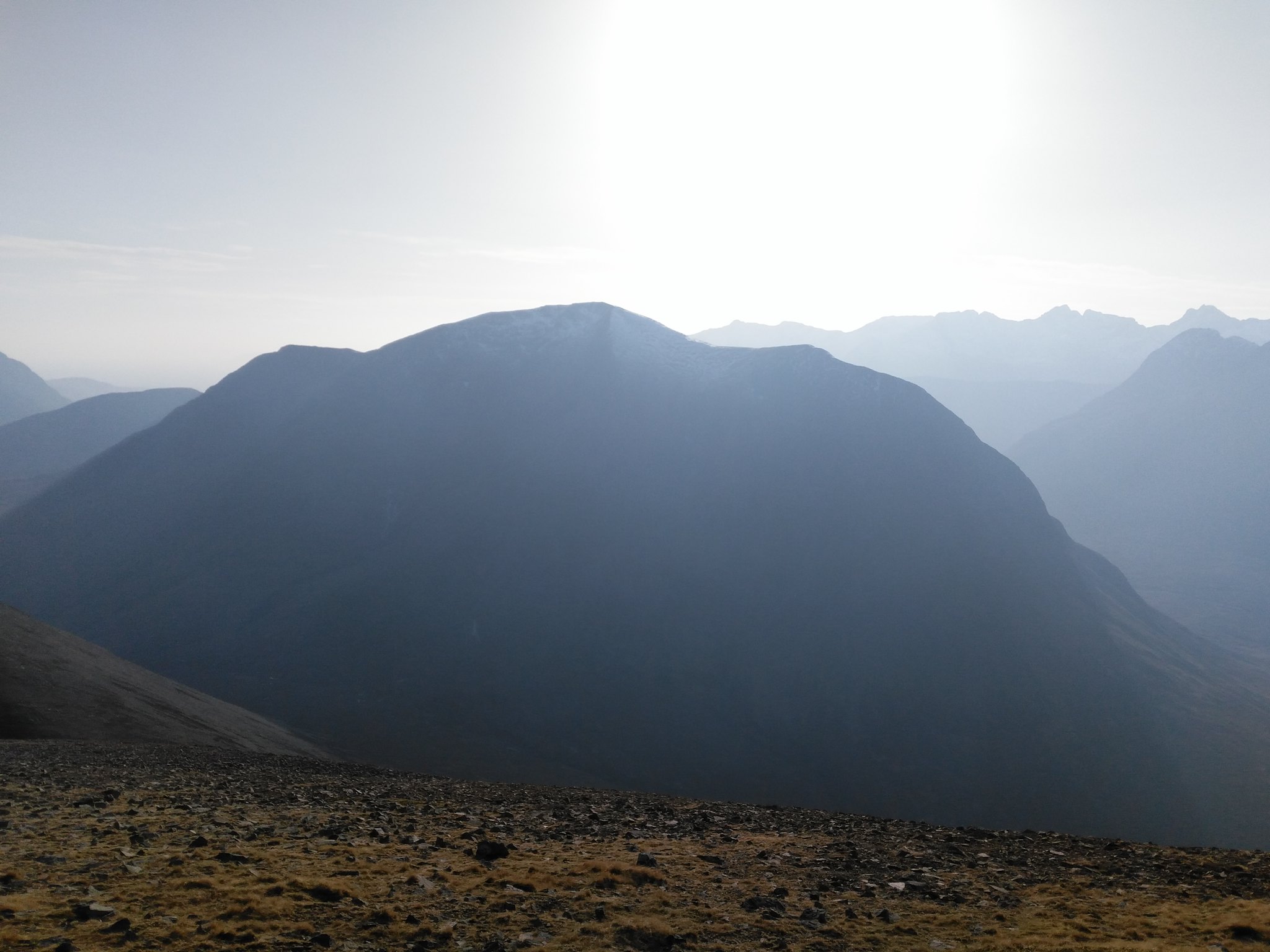 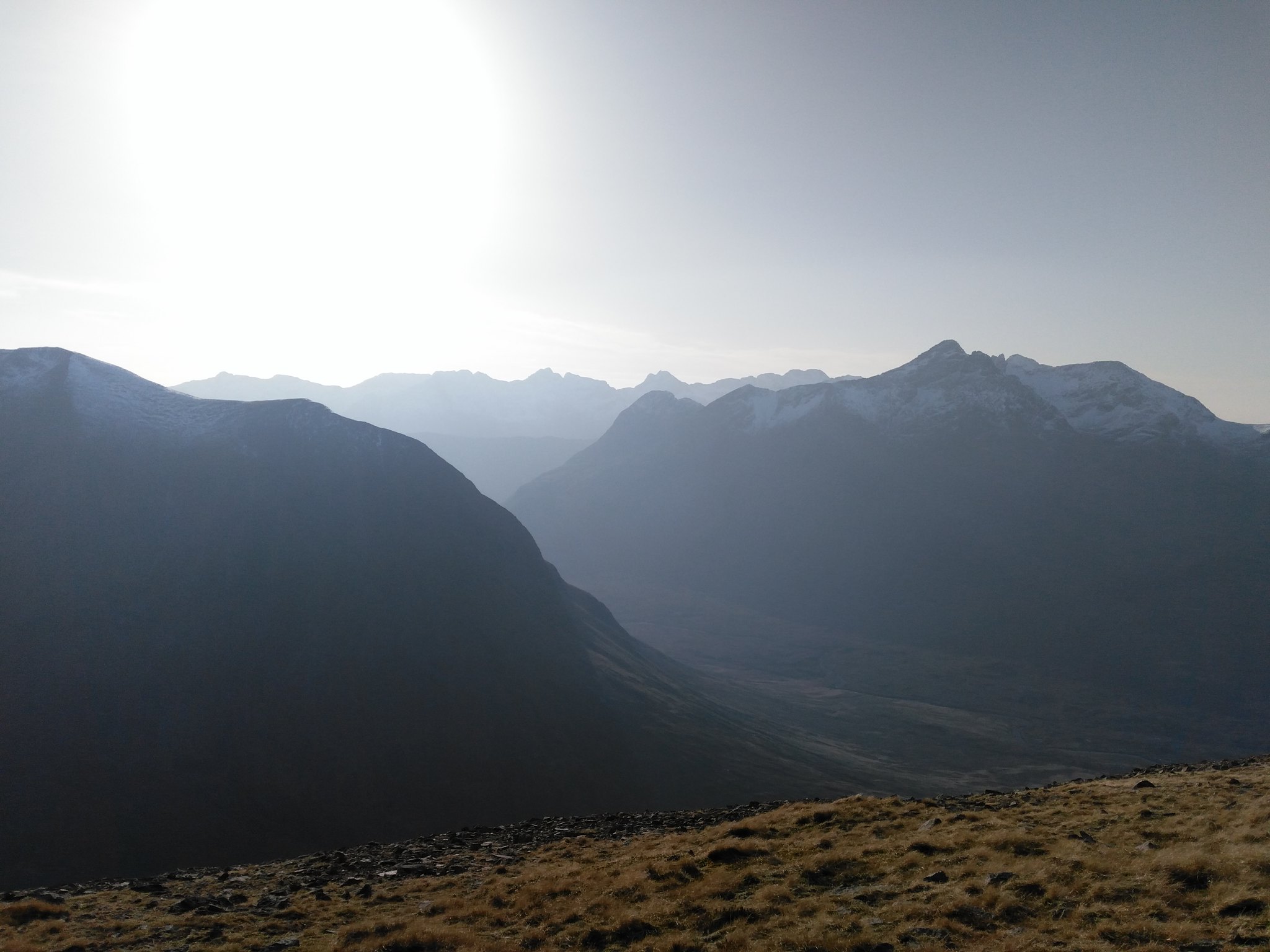 Marsco and the Black Cuillins

Although I've spent plenty time in the Black Cuillins in the last few years, and been up and down Glen Sligachan a couple of times, Glamaig was the only one of the Red Cuillins I'd been up until the end of last year, when we went up Garbh Bhein and Belig in October. But these are in fact really great walks, and would be the pride of most other Scottish islands if they were out from the shadow of the main Cuillin ridge. I'm looking forward to getting up Marsco before long. 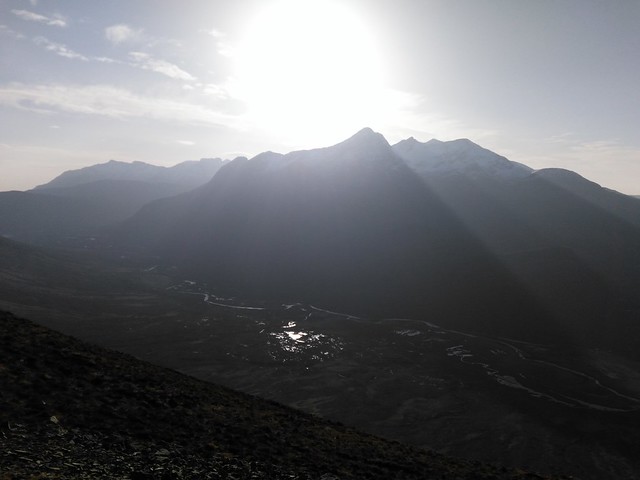 Walking back, the sun started to drop lower reflecting nicely of the river on the floor of the Glen. The phone camera did all right, but a good photographer with the right kit would have a had a field day I reckon. 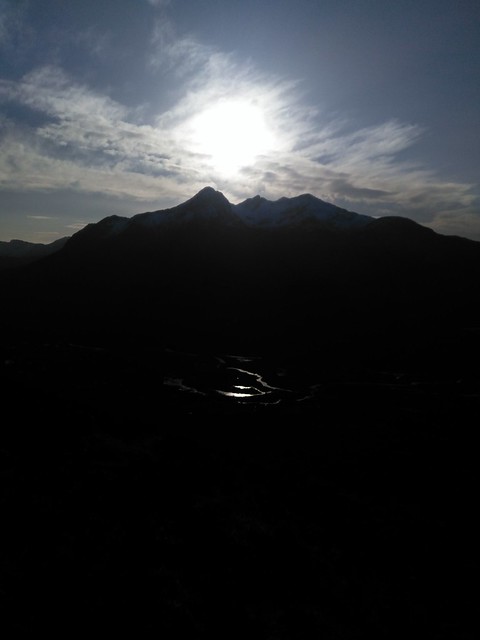 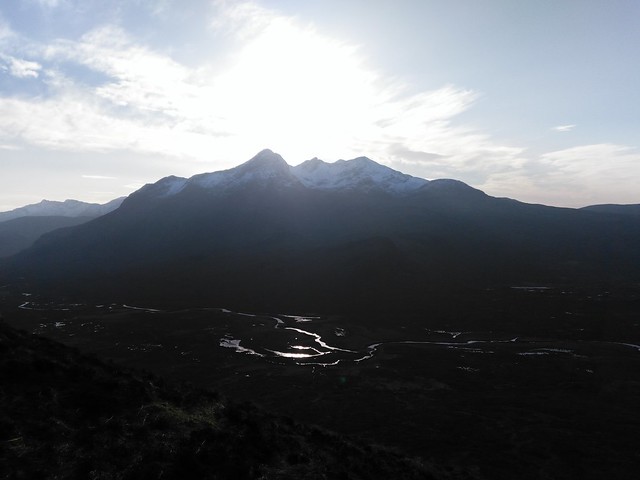 Back at the Slig the family were playing away in the park, cleaned up and rested. A really nice sight to come back to. We'd all had great days, with the exception of poor mum. So we sent her up the next day to do the same walk, pretty much step for step. Me and the boys watched cartoons and ate toast.