Meall na Leitreach, an ideal day for the snow shoes

Meall na Leitreach, an ideal day for the snow shoes


I'd already climbed this hill in 2013 under very different conditions hence the huge difference in completion times, but with the underfoot conditions of soft snow and even softer ground below and huge sections of peat hags to negotiate it was always going to be a slow climb, but hey a fine day out on the hill was to be enjoyed with good company and a fine way to start another AMC weekend meet.
We had arranged to meet at Dalnaspital in Drumochter at 1200hrs and although there was 10 mph speed limit on the A9 South of Pitlochry we both arrived on time, booted up ready for the off by 1215hrs we agreed as there was snow on the road it may be as well to leave the cars at A9 level and it was a good call as the parking area i had used the last time at the level crossing was flooded We walked over the sluice dam and carried on along the main track until finding an ATV track on our left to take us towards the dam shown on OS maps. On the way back we just followed the WH route between the sluice dam and dam which is quicker, a heras fencing gate has to be lifted to gain access Walking along the dam at the East end of Loch Garry After crossing the dam take the track left and then almost immediately take anothe ATV track heading up the hillside on the East side of the Allt nam Plaidean. On the ATV track Still on the ATV track higher up, water lade in the background Yep, Lynne was the first to find one of the soft peat hags Then it was Martin's turn After descending a short distance after the peat hag area it was time again to start climbing but not far to go now, this was where we came across the ATV track again freshly formed 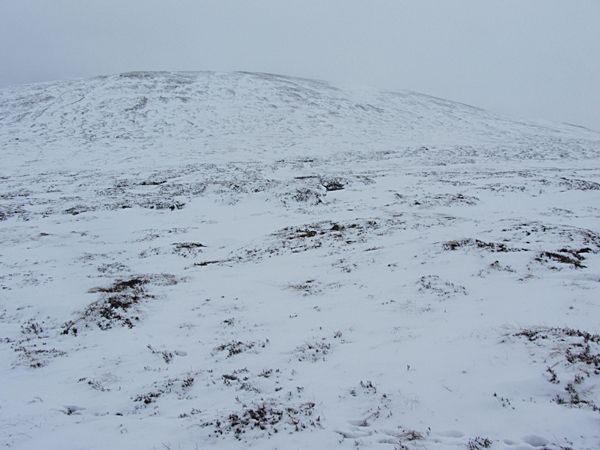 The final climb to the summit Lynne at the summit cairn with Martin coming behind, he had been trying to throw of the effects of Man Flue all week and the heavy underfoot conditions were beginning to take their toll We had made the decision that we were to follow the ATV track down all the way rather than try and plough through the hags once more, but maybe this wasn't such a good idea, there were many instances this one in particular could have been pretty disastrous as there took a fair bit of pole digging to enable both foot and boot to be recovered intact. This ATV track took us well out of the way and must of added a fair distance to the walk and with hindsight we should of retraced our steps.

Re: Meall na Leitreach, an ideal day for the snow shoes

You should have used it as an opportunity to visit Duinish!

To show you what it is like on a fine spring day...

Re: Meall na Leitreach, an ideal day for the snow shoes

To show you what it is like on a fine spring day...

I might have done had we more time but with a 1200hr start and with underfoot conditions it was always to be up and down. Tried to visit Duinish the last time I walked through but the whole place was surrounded by cows and their calves and it was not long after being chased by a cow experience so decided to give it a swerve