……and beyond and onwards to Ben Vane via Beinn Dhubh (773m).
At the start I met a father and son who were heading off to climb Ben Ime from the Butterbridge end (fortuitous meeting as it happens) and carried on up the steep flanks of Glas Bhealach, a fairly direct approach and a taxing one perhaps!

From the Butterbridge car park it was to be a 9km walk before even setting foot on a hill. A fairly attractive walk that allowed you to feel as if you were walking further and further into the wilderness and on the way I reached ‘Abyssinia’, an empty bothy beside Allt Uaine burn ( of which I took pics. , but managed to erase them!) just off the main path. 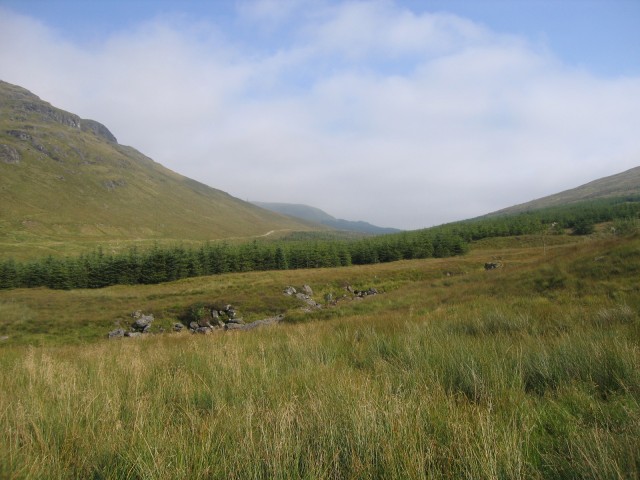 A view along the path still to be covered

These pics were from the front of the bothy or the garden as it were. Further on (90mins into walk) I passed 3 two man tents which must have been for the workers doing their bit for the estate and of all things a nice little off road vehicle, very tempting it was to maybe borrow it for the hills.(** Pic 4 is at the end as I got the rder wrong..sorry)Looked fun but I think the owners might have missed it!
The signs for Ben Vane are clear enough and I eventually passed through the last gate pointing me in the right direction. From here the path is very easy to follow as it runs beside a man-made concrete thru-way for part of the water supply to Loch Sloy 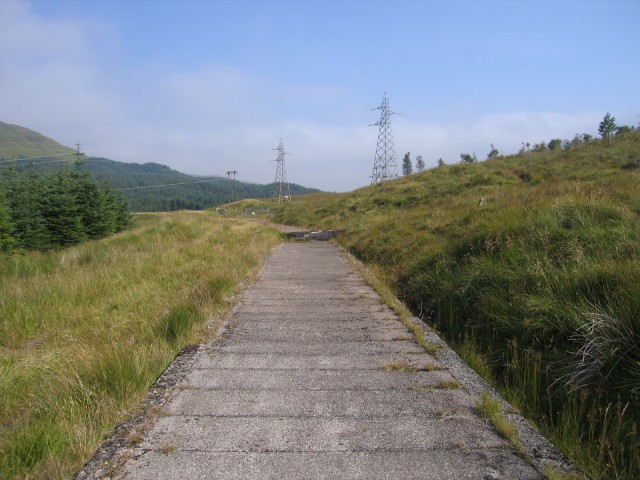 Pipeline covers looking back at the gate 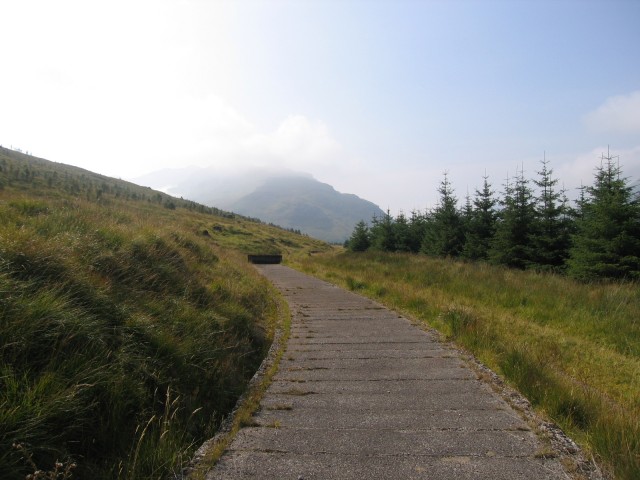 same as 5 but looking to Beinn Chorranach

At the end of this you reach a small dam where the path ends and then it’s pretty much find your way to the summit. No clear path exists and you rely on navigation for pretty much most of the way. 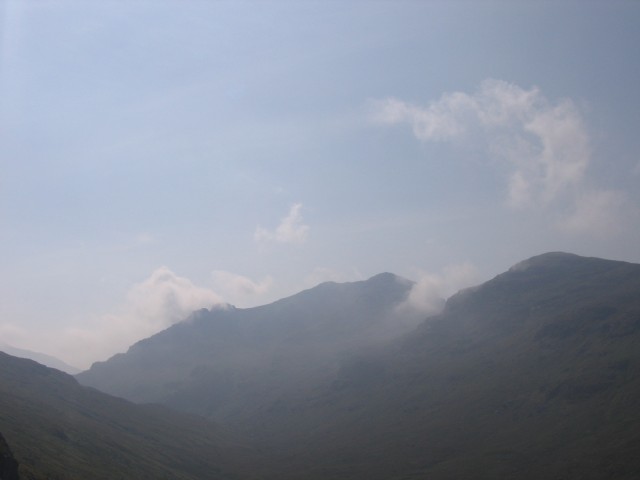 Ben Ime through the clearing cloud

There is a fence marking the boundary which I decided to follow Nth, NthE for a while until I felt it was good enough to aim for higher ground. By the time I reached Beinn Dubh, 4hrs had passed but I was in no hurry as this was a day out after all. 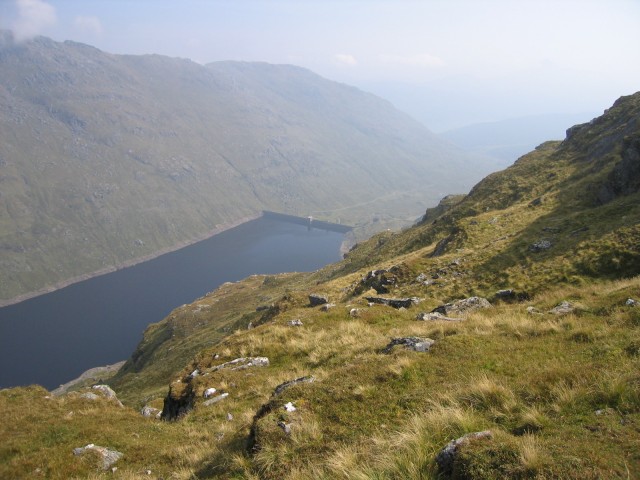 View down to Loch Sloy dam

From the summit there appeared a nice view down to Loch Sloy. Pics 9– 13 are all looking southwards to Ben Ime and Ben Vane with some very atmospheric pics of cloud being caught on its journey over the hills. 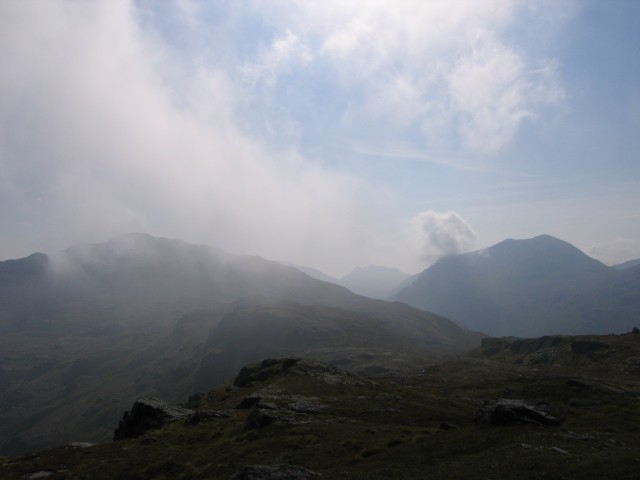 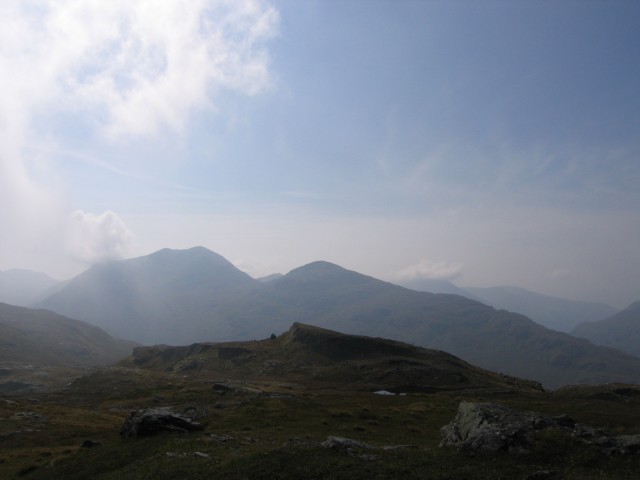 Ime on the left Chorranach on right 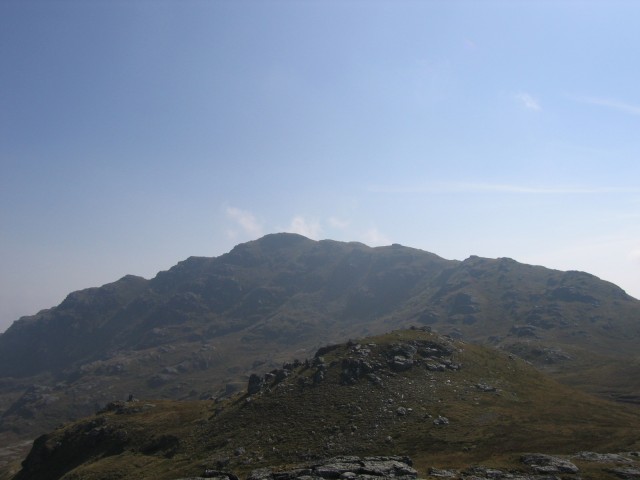 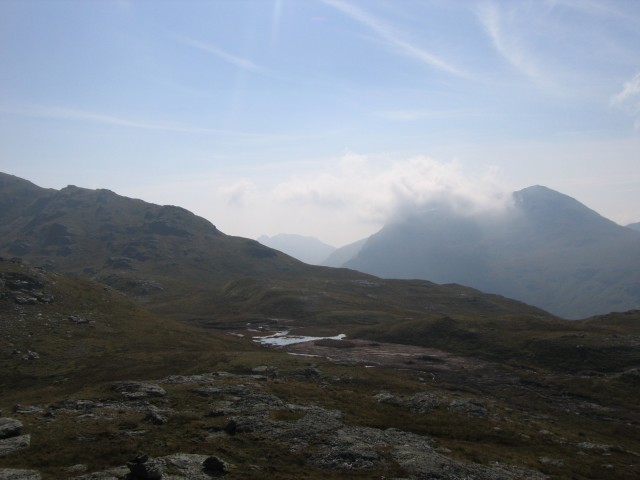 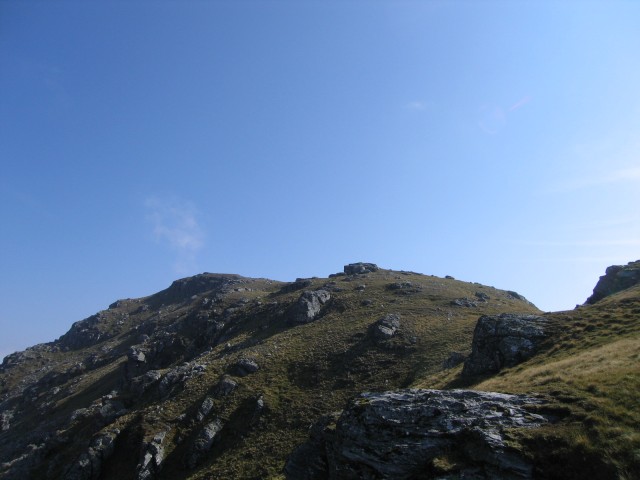 Image 14 is looking back at Beinn Dudh 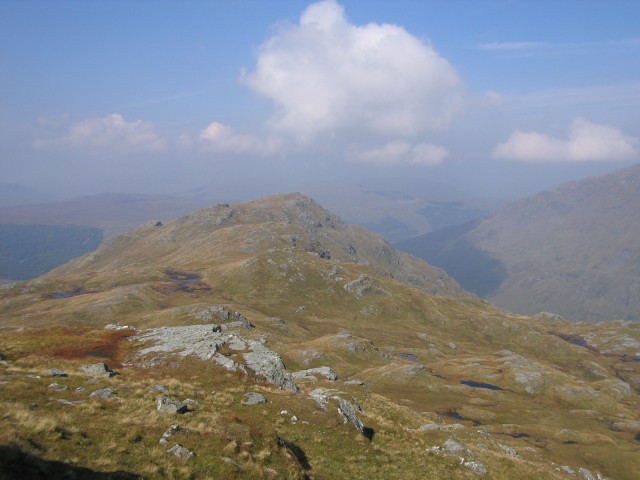 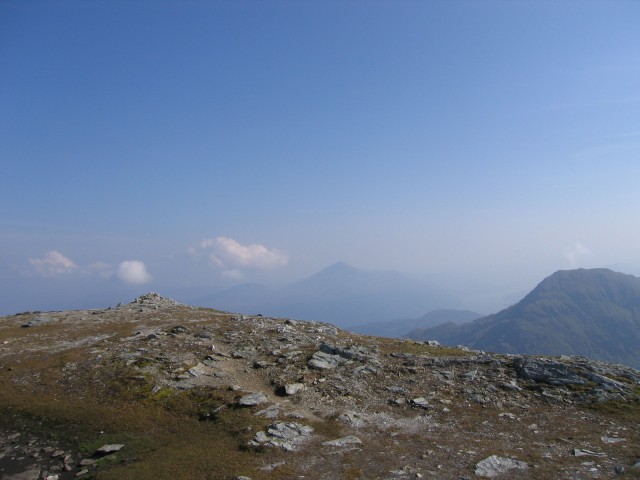 and images 16,17 are looking at Ben Narnain & Ben Ime with Beinn Chorranach as my intended destination from Ben Vane in the distance. 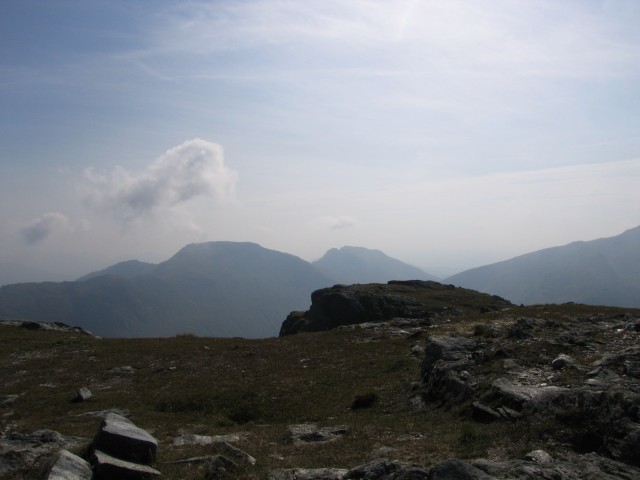 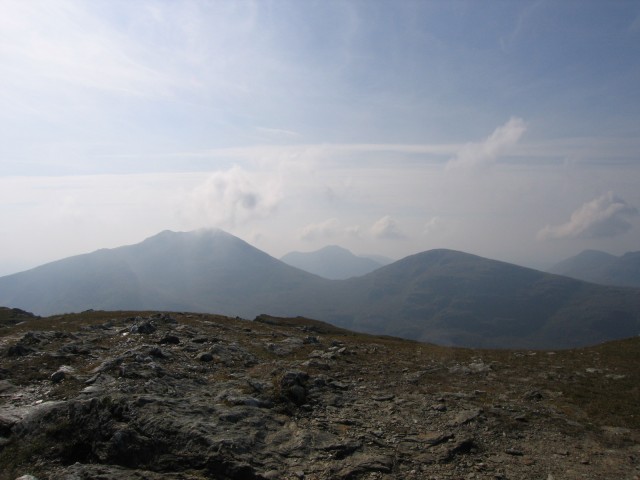 I found at this vantage point no discernable path leading from Ben Vane to Ime or for that matter Beinn Chorranach, visible from my vantage point. So basically it is to follow the contours on your map and visual of the terrain which takes you from Vane to the bealach between Ben Ime & Bein Chorranach. It is a fair descent and then re-ascent coming from Ben Vane, but the views are still stunning of the surrounding hills and rock formations that are all around you 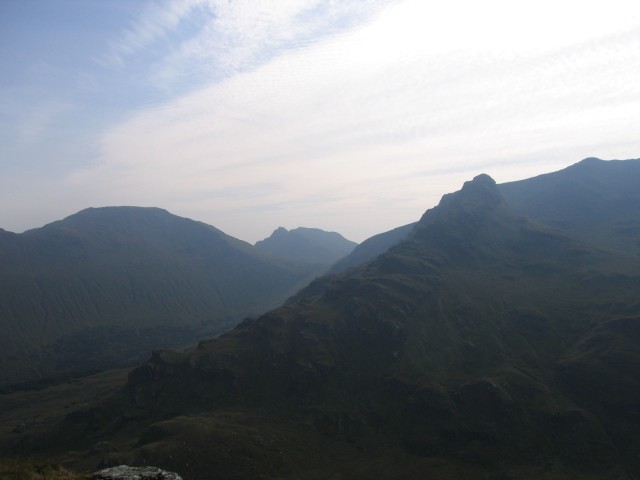 Half way down Ben Vane and these rocks looked pretty impressive 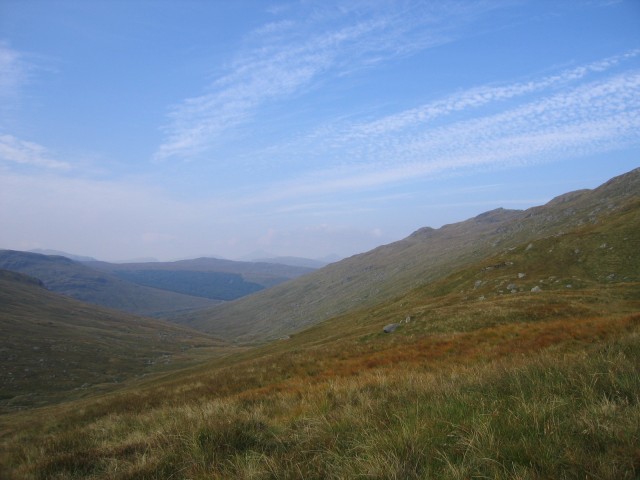 Looking North down Gleann Uaine and path in distance 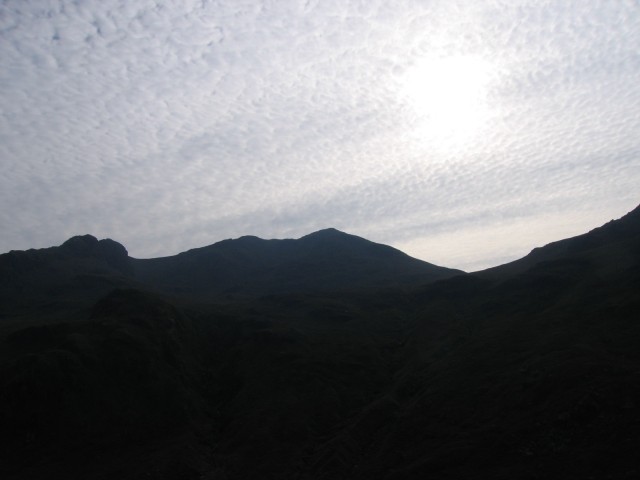 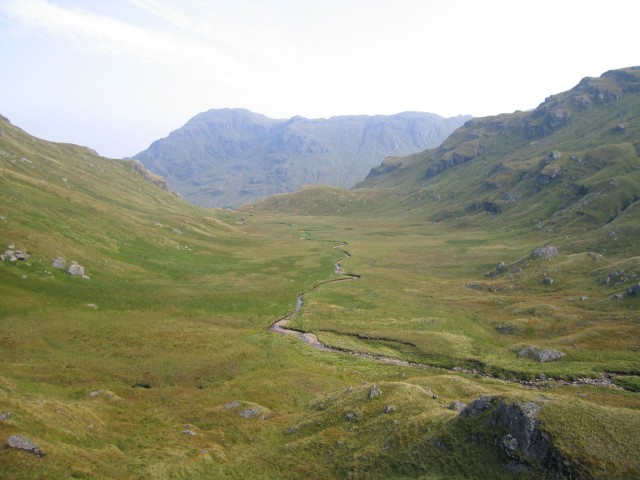 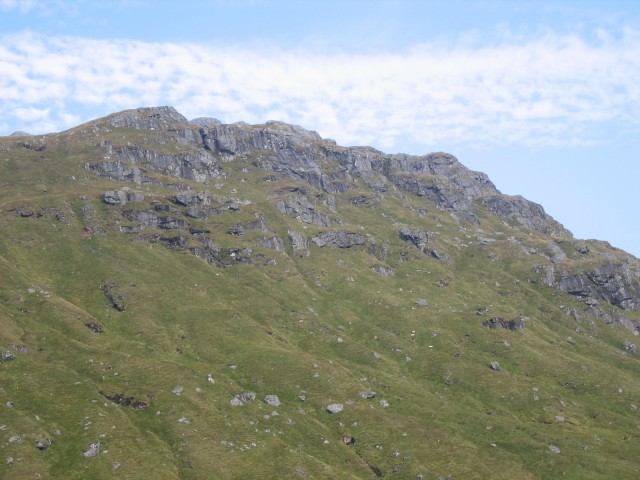 A glimpse back at Ben Vane

Image 21 reminded me a little of the lost valley only for its solitude and out the way(ness) of everything else. I might come back here for a day or two with my tent. Walking down then back up again, the effort is always rewarded as each time you look at the summit it is nearer than it was a moment ago. I finally got to the top of Beinn Chorranach and it felt as if I’d added a missing piece of the jigsaw by including this Corbett in the walk. 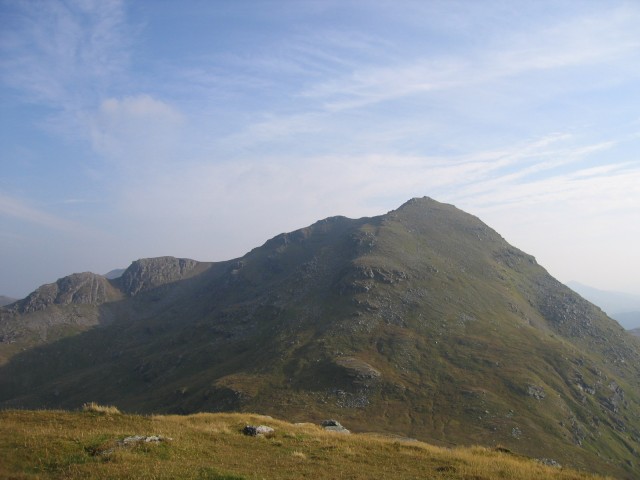 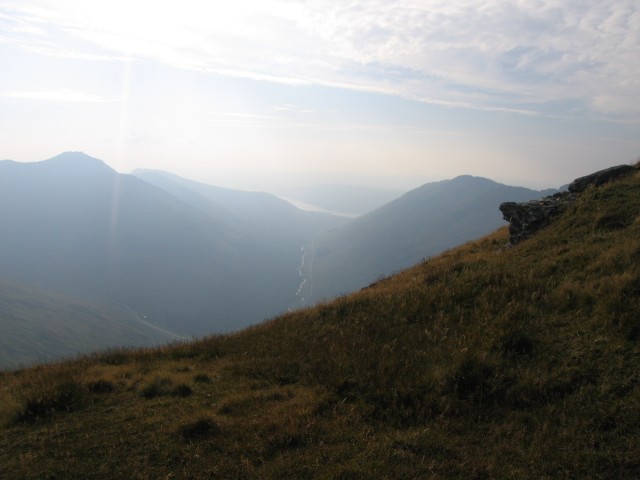 somewhere down there is a road (Glen Kinglass A83) 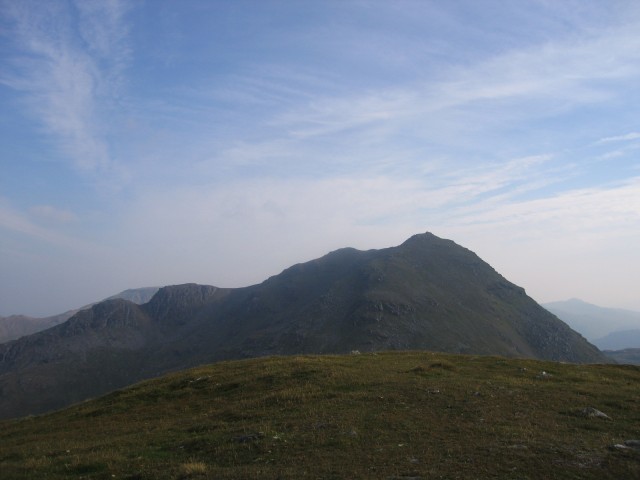 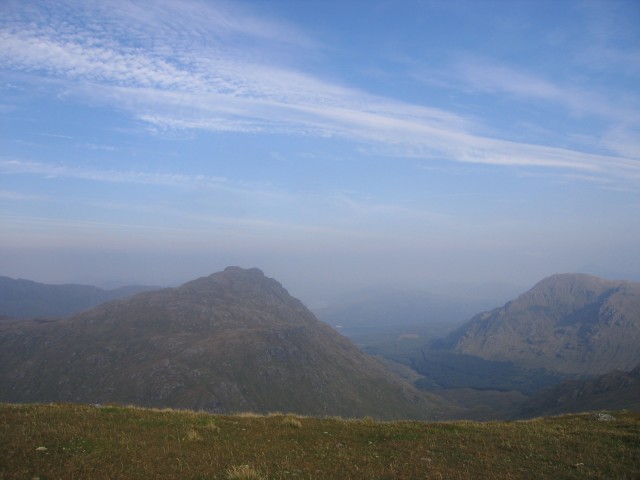 Another day Ill be back Ben Vane

After a well earned rest and refreshments it was then homewards. Image 27 is looking down at the car park and seeing a spec that I knew was my car, I realised just how far I’d come. 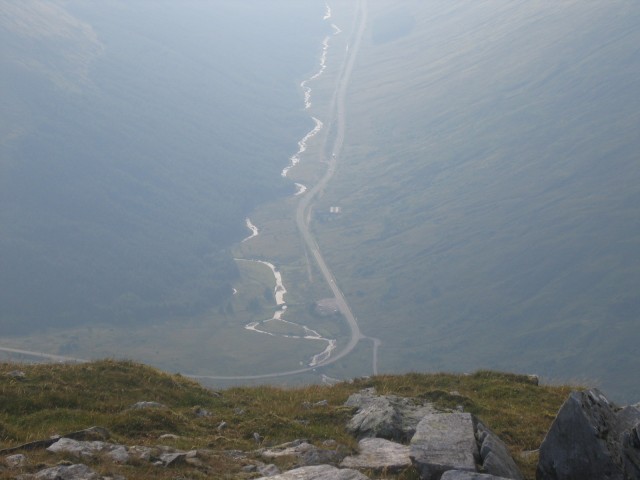 My intended return was to follow a northward route down the spine of Chorranach back to the dam at Glean Uaine. I could see my points of reference and soon remembered that it would take at least another 2/2.5hrs to my start point. Then like a flash I remembered the folk I had met in the car park who came up to Ben Ime from the Butterbridge side. This meant if I returned via Glas Bhealach and followed the burn (Allt Beinn Ime) I could shave off quite a bit of time. So my descent was by that way. Near the bottom I came across some highland ‘coos’ but thankfully they were on the other side as I didn’t fancy a wrestle at this stage in the day. I passed the telephone mast and on by a deserted croft returning by a short walk to the car park.

An 8 hour day of walking including stops etc was just the tonic, as when I got home, waiting for me was one very delicious meal and my favourite German beer- Priceless! 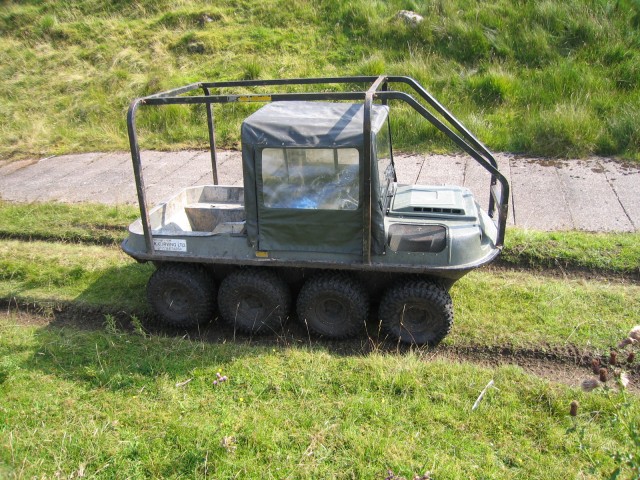 I wanted to borrow this little chappy but thought better of it...lol

Great report and pictures there. Done this hill but never seen pictures of it from this side. Looks a long walk in which is probably why most do it from the other side.

I wanted to vary the walk a little and take in some of the hills normally missed in this walk. I think I covered about 20miles or so and at times I wish I had stayed on the popular route, however, I'm really pleased I did it and the views were tremendous as always from the heights when the weather is good.