In the footsteps of Weasels and Wabbits

In the footsteps of Weasels and Wabbits


I followed what looked like an unlikely forecast, but it said decent weather for the Elvanfoot Donalds and I was being my usual optimistic self…. Leaving Glasgow, I was not hopeful. It was very wet as I drove South (the first time I’ve ever driven South for hills

) but it did look clearer ahead. Once I’d escaped Glasgow’s microclimate (which reached all the way to Elvanfoot

) it was dry. Not clear, but I’d definitely take dry at that point

I was planning to follow Weaselmaster's route to take in the 5 Elvanfoot Donalds in the Lowther range. Nothing especially difficult, I hoped

I left the car at 9 and headed along the road. Fortunately the start was helpfully signposted and I turned uphill. If I’m honest, I’d kind of thought that the Southern Upland Way would be similar to the WHW – basically a track. It was not to be. I squelched my way up a boggy field following a vague route. Once I reached the fence the route was always clear, but it wasn’t quite the easy walk in I’d imagined

Looking back – bog and clag 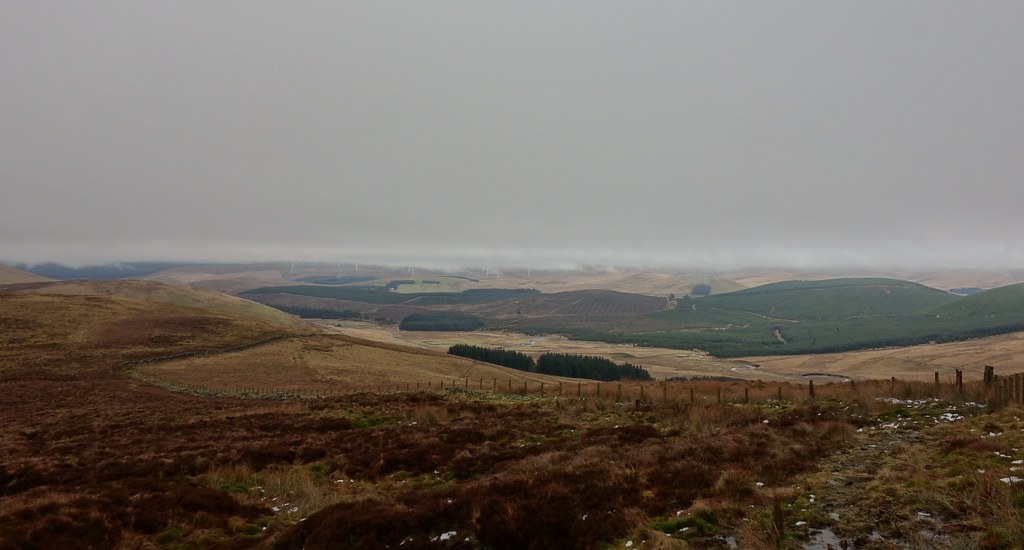 Ahead was a steep climb up what I could only assume was Coomb Head as it disappeared into the clag. After a quick drink and loss of layers it was time…it was hard going especially as I was now into the snow. There was the threat of rain here but after a few spots it seemed to give up 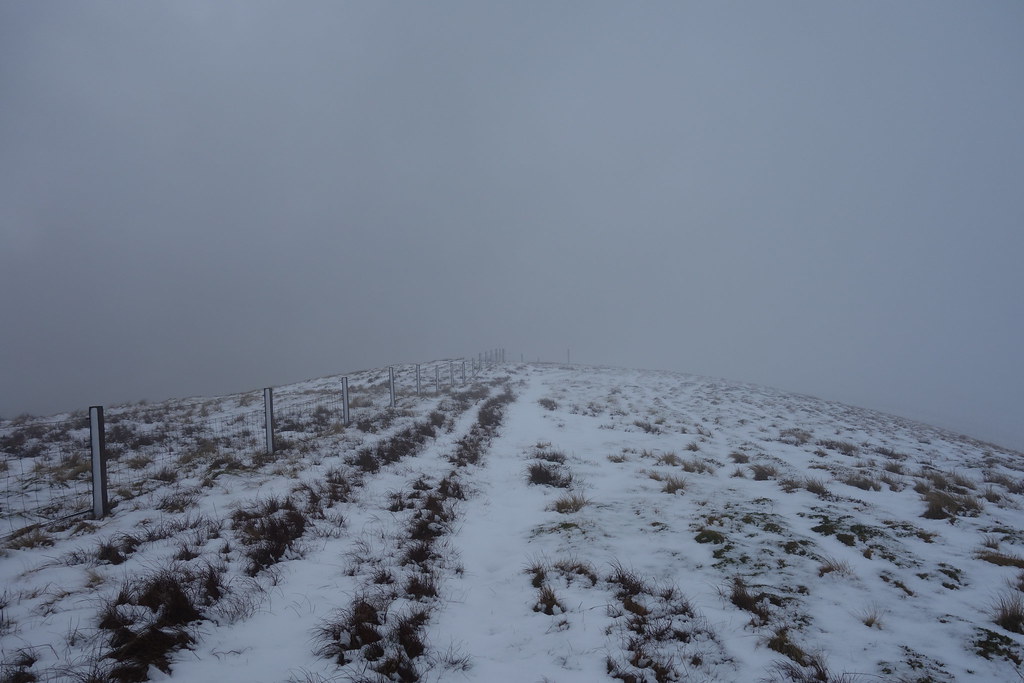 There were rare moments of clarity I followed the fenceposts and path and lots of what looked like rabbit footprints. 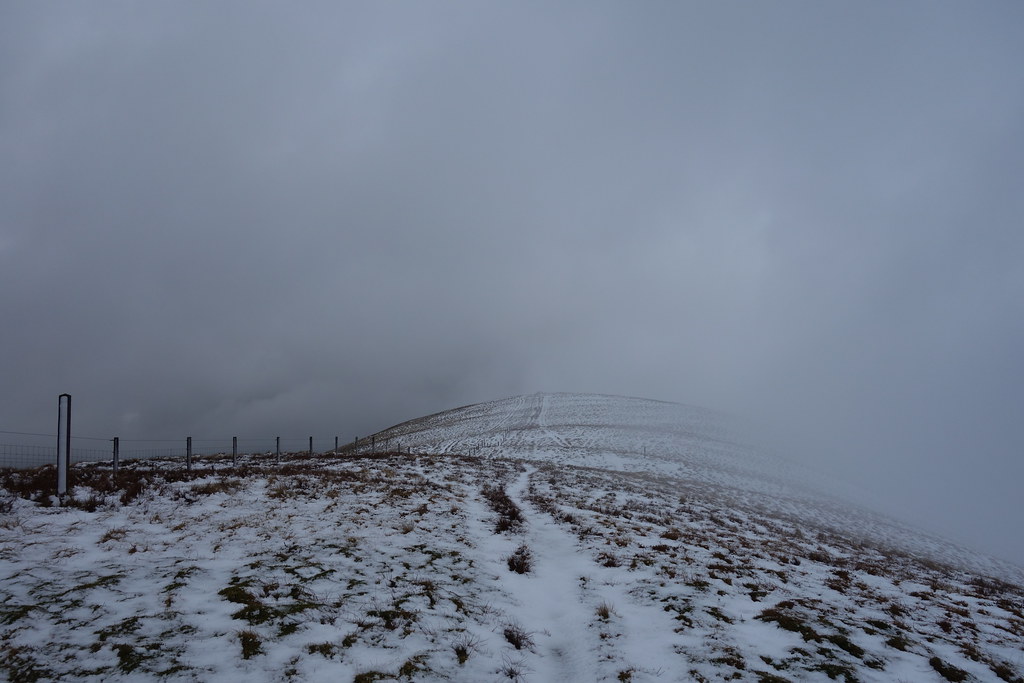 Shortly after Cold Moss the fenceposts and SUW diverged….Lies – on the map they’re the same

As the visibility was down to around 10m or less here I took a bearing and decided to follow the fenceposts as they matched the map. Fortunately everything joined back up soon enough

There were some interesting shapes in the mist… 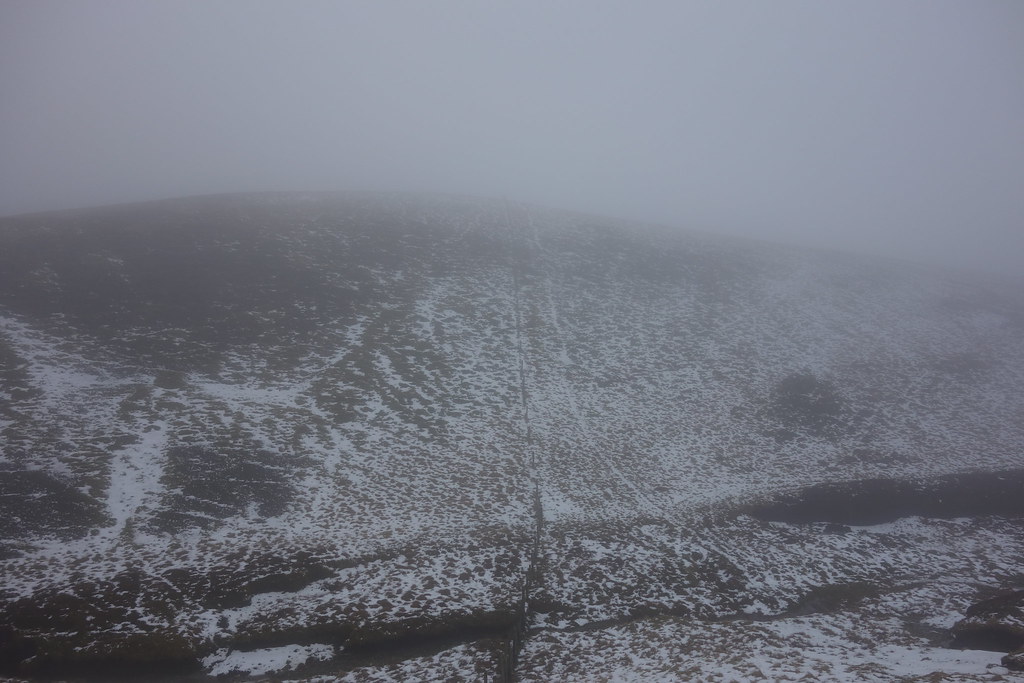 The final approach to Lowther Hill was tough going. The snow was much deeper here but it was soft so I kept sinking into it and every step was difficult. I knew I ought to be able to see the huge radar station dome soon but all I could see was white white and more white 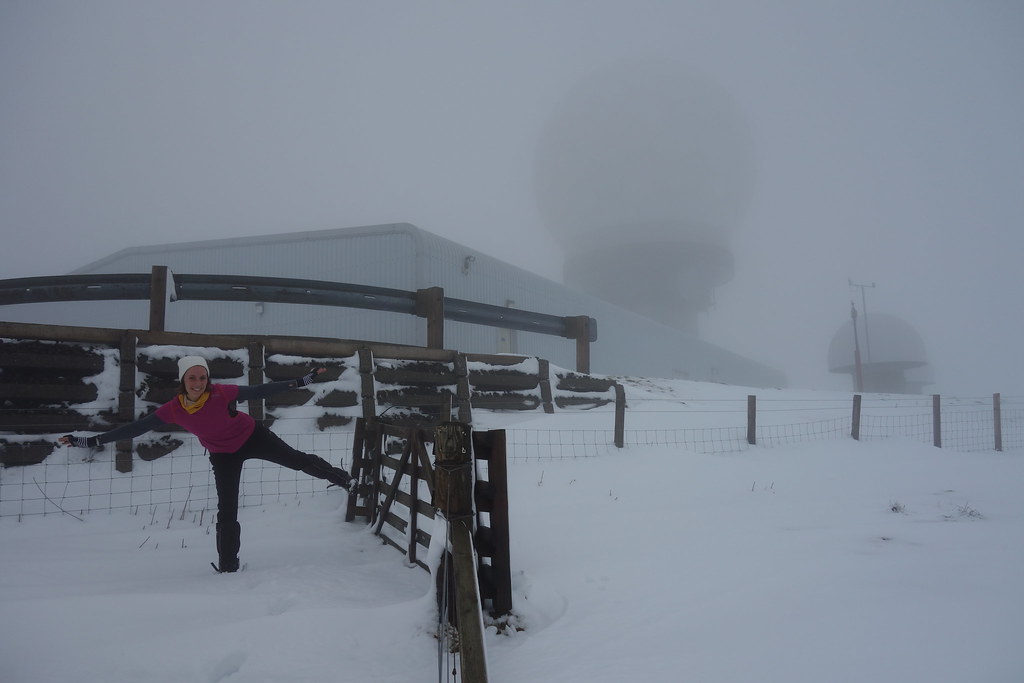 I ate half a “protein bomb” – a new discovery. Meaty chocolate…

I followed another line of fenceposts which took me down to another radar station. I saw a wee rabbit (or possibly a hare) as I trudged through the deep snow. 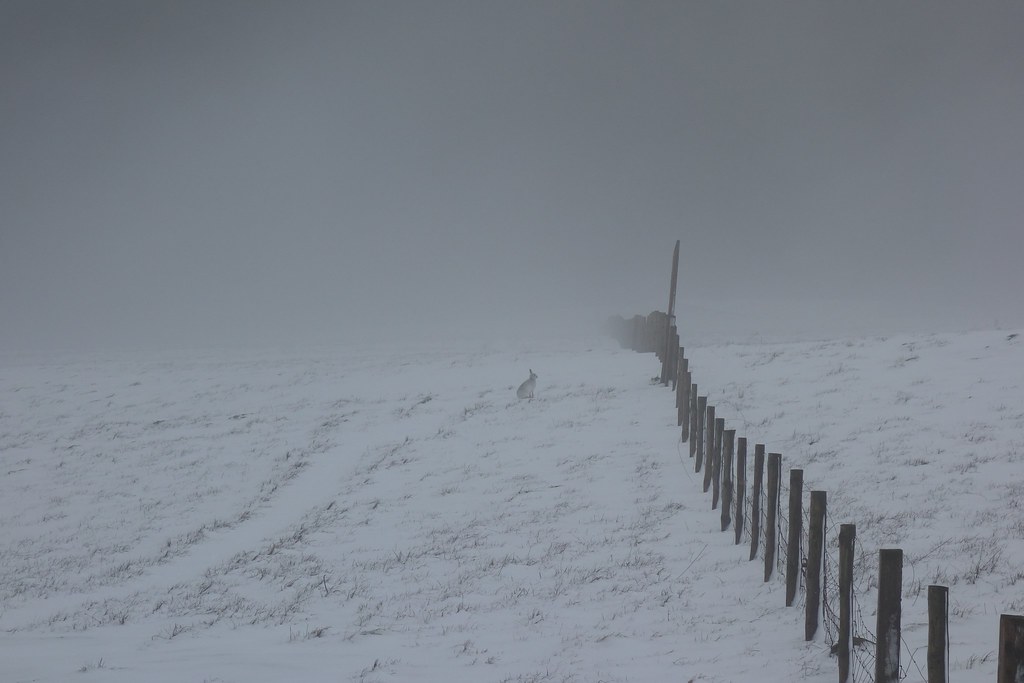 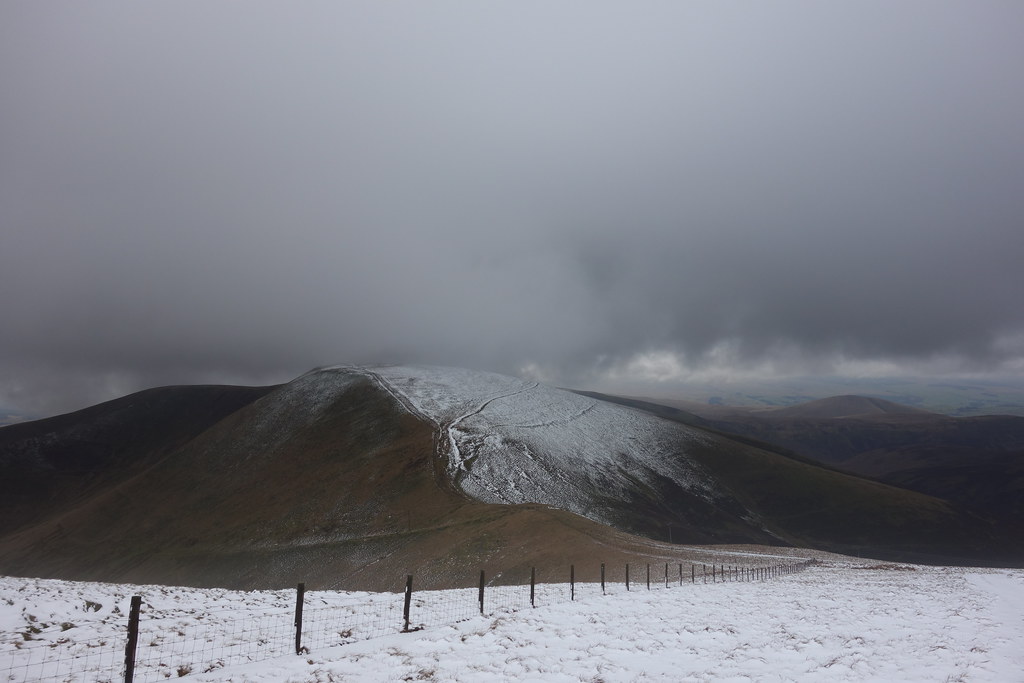 I followed a good track which lead me most of the way up East Mount Lowther and I then followed the fenceposts to the top. I had some sort of views 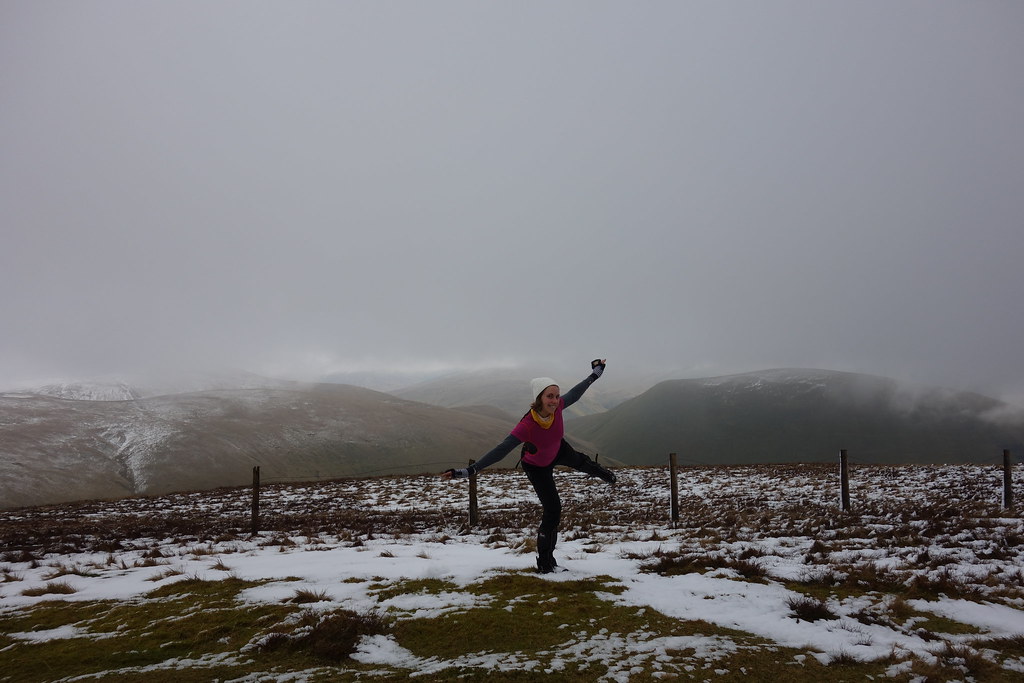 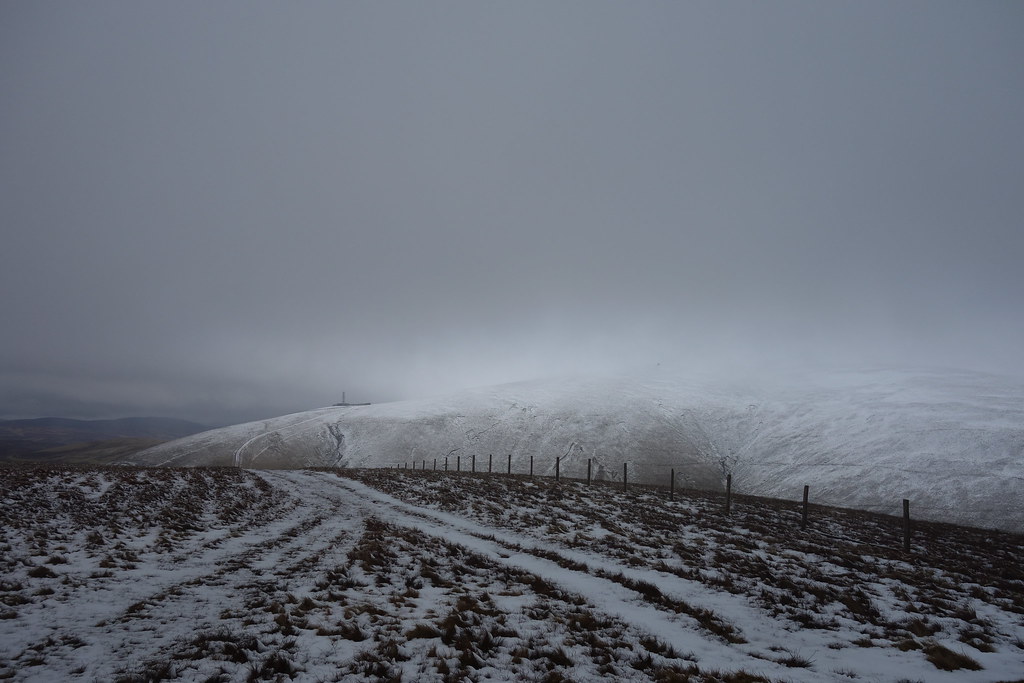 Now I was stopped it was quite chilly so it was time to head off. Back to the radar station I met another human – a man out with his dogs. We had a wee chat (he was to be the only person I encountered all day) before I followed the road back to the summit of Lowther Hill to avoid walking back up the deep snow. The road was covered in snow so was by no means easy!!

The visibility was somewhat improved so I spent a bit of time exploring. 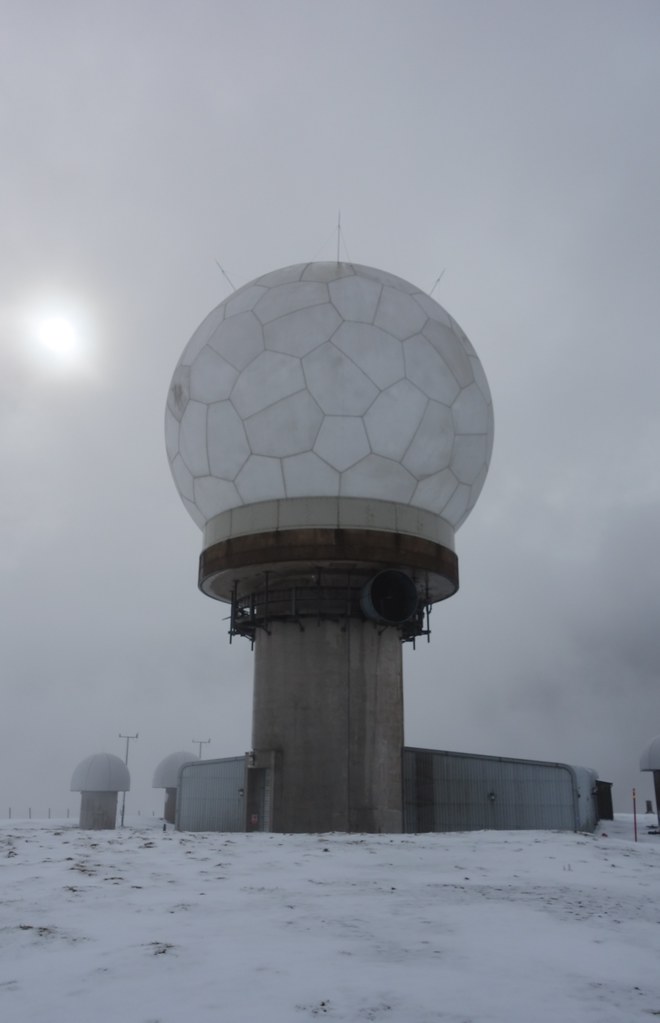 From here there was a road that led all the way to Green Lowther, the high point (and also a Graham) for the day. It should have been easy but the thick coating of snow made life difficult and I was sinking and slipping all over the place

But it was definitely weird seeing bits of tarmac on the hills, even glimpsed the white line down the centre occasionally

Looking back along the “road” to Lowther Hill, the golf ball hiding 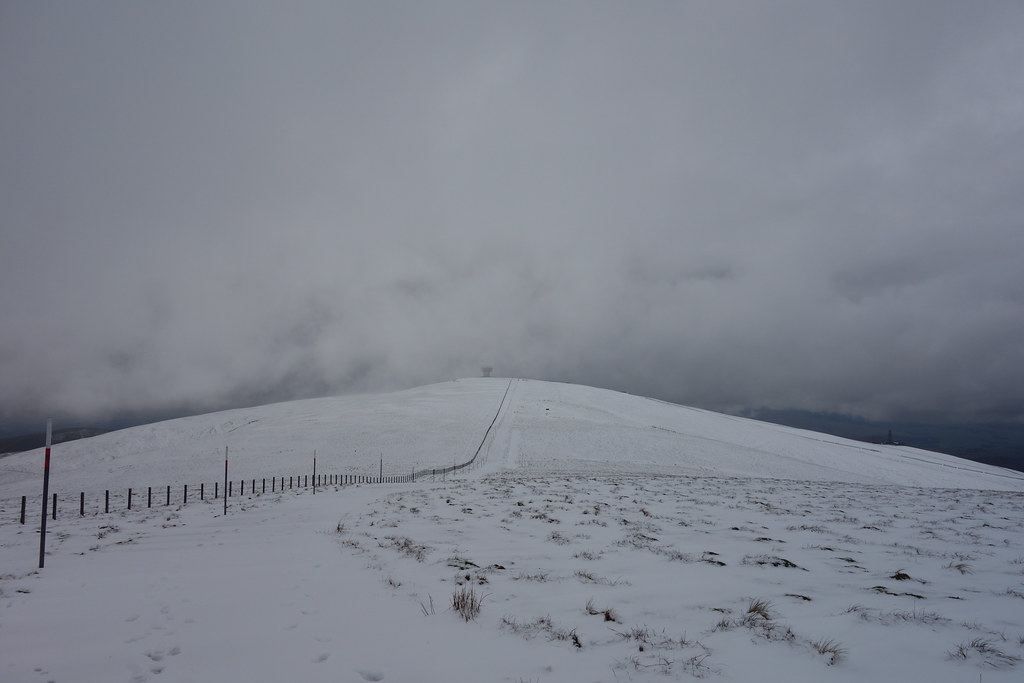 Green Lowther itself was somewhat spoilt by all the masts and buildings but I managed to find the trig point in amongst it all. 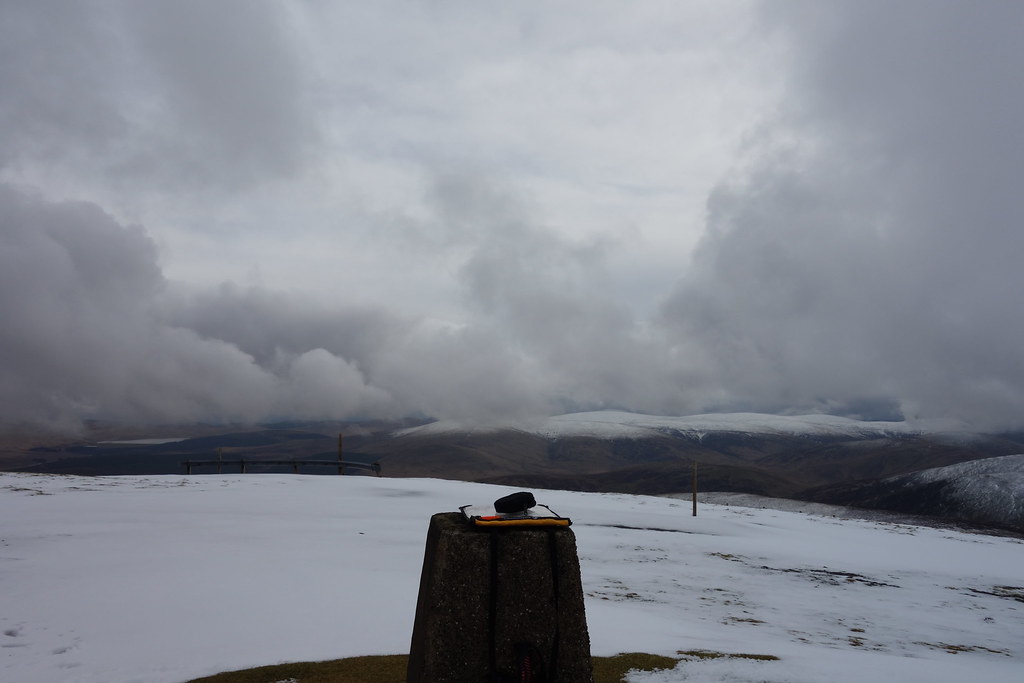 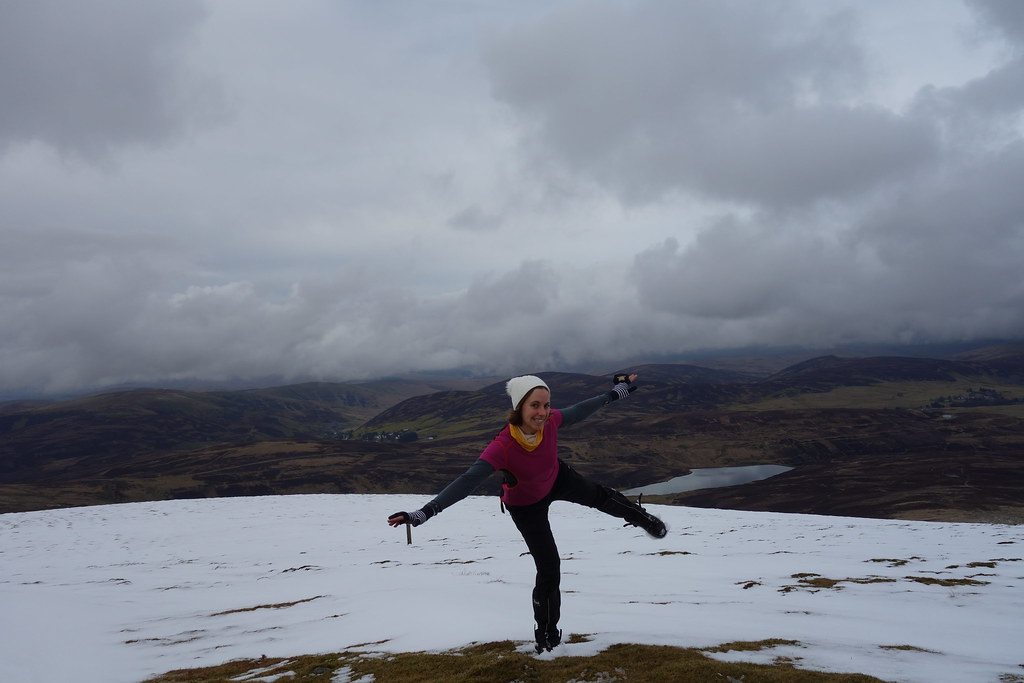 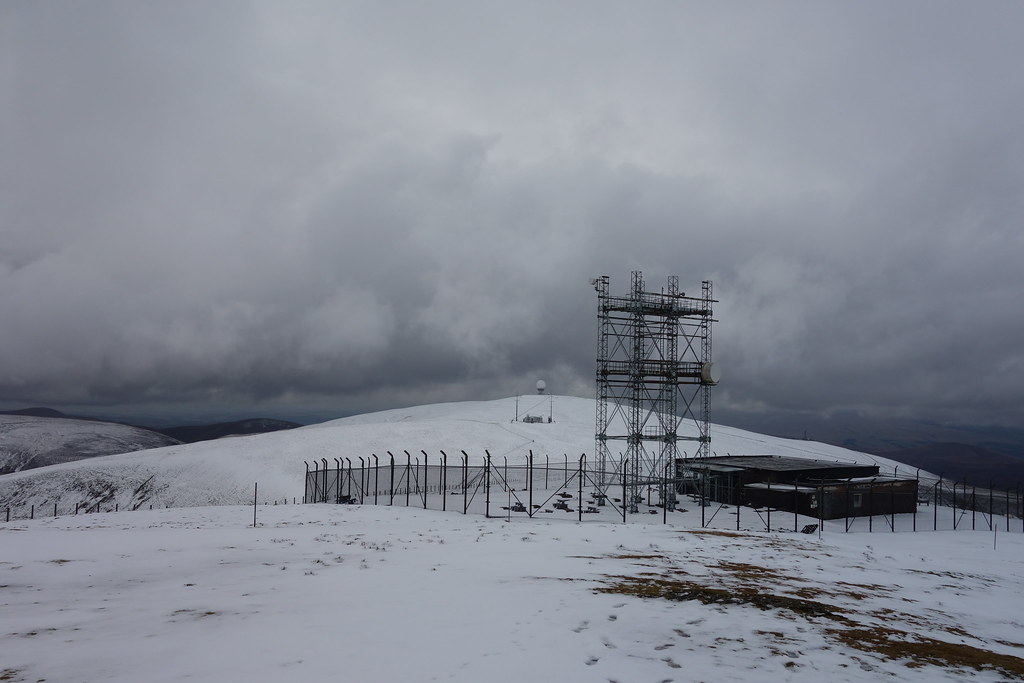 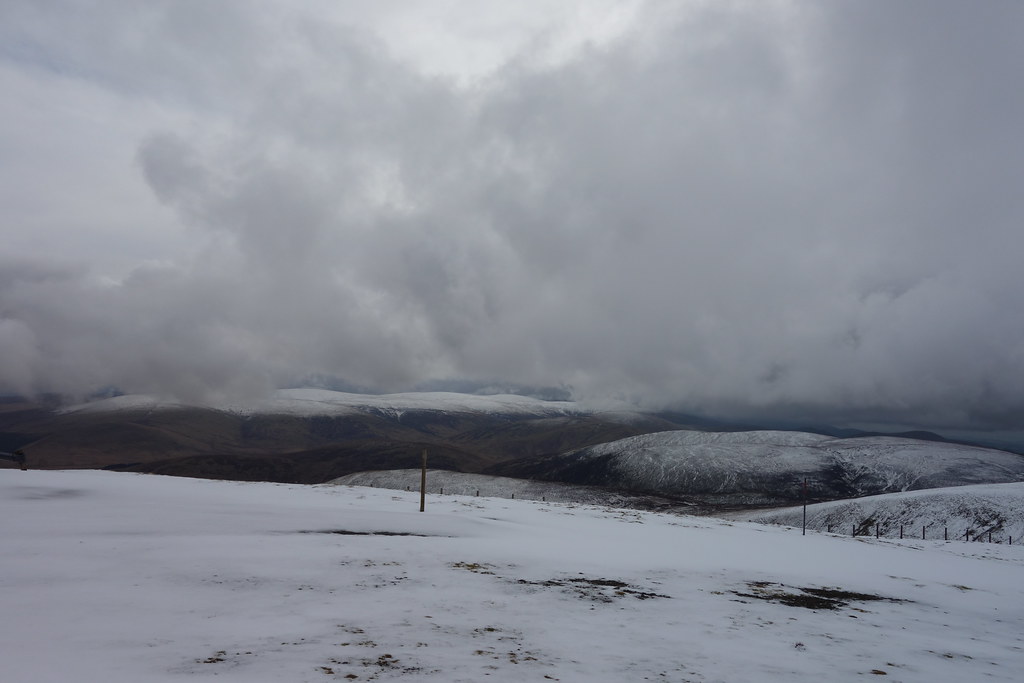 The visibility had improved hugely and once I had escaped from the maze of masts I could see ahead to Dun Law.

I pushed on, again following fenceposts. It was challenging underfoot – soft snow and bog and soft hummocks. After a few ups and downs I was at the final approach to Dun Law. It was a steep wee bugger and I reached the summit relieved that there was only one left

A pause on the way up…

Dun Law was entirely unremarkable as a summit (not even a cairn) other than it being the confluence of 3 different fence lines, but the views were pretty.

Ahead to Louise Wood Law 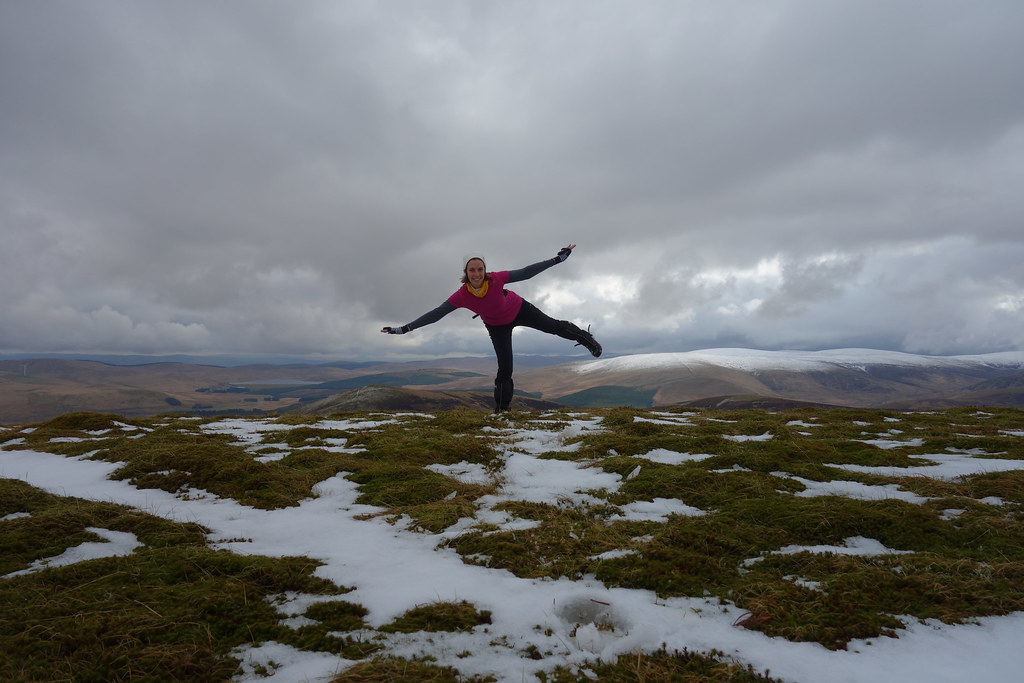 Heading out of the snow at last! 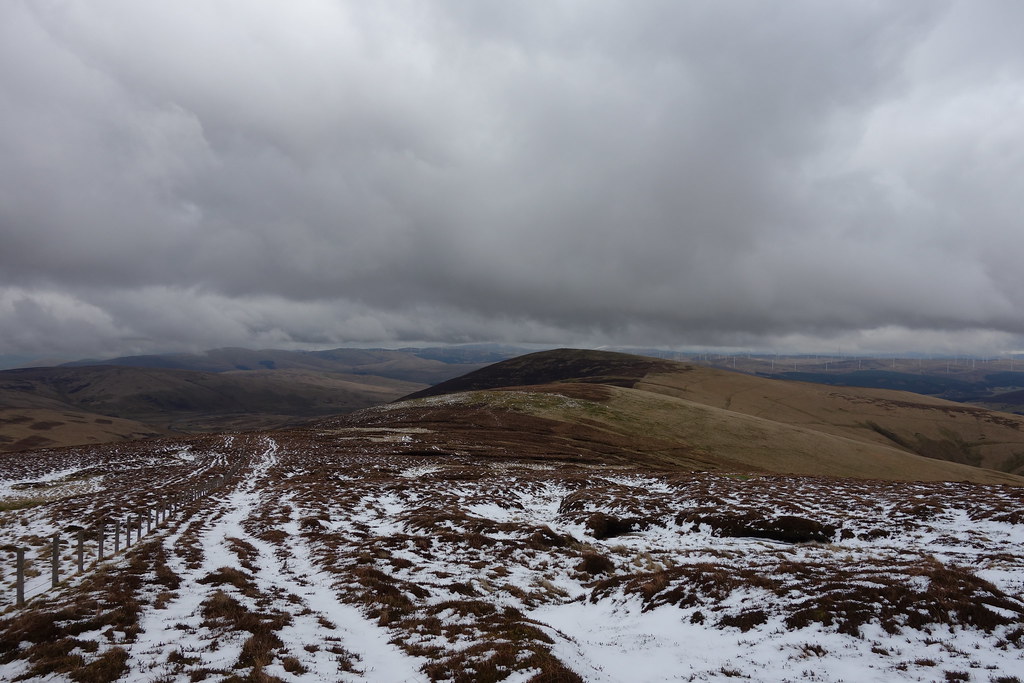 After inhaling a flapjack I headed off along the ridge, reaching a very steep downhill section before the final assault on Louise Wood Law. I decided that twisted ankles or worse would be unwise here and carefully made my way diagonally downwards. The steep uphill the other side of Little Windgate Hass nearly finished me off.

I don’t know where Louise herself was, but a large flock of sheep ran off as I approached. The M74 was so close but you could forget it was there. It was a great viewpoint…especially for “cock forest” 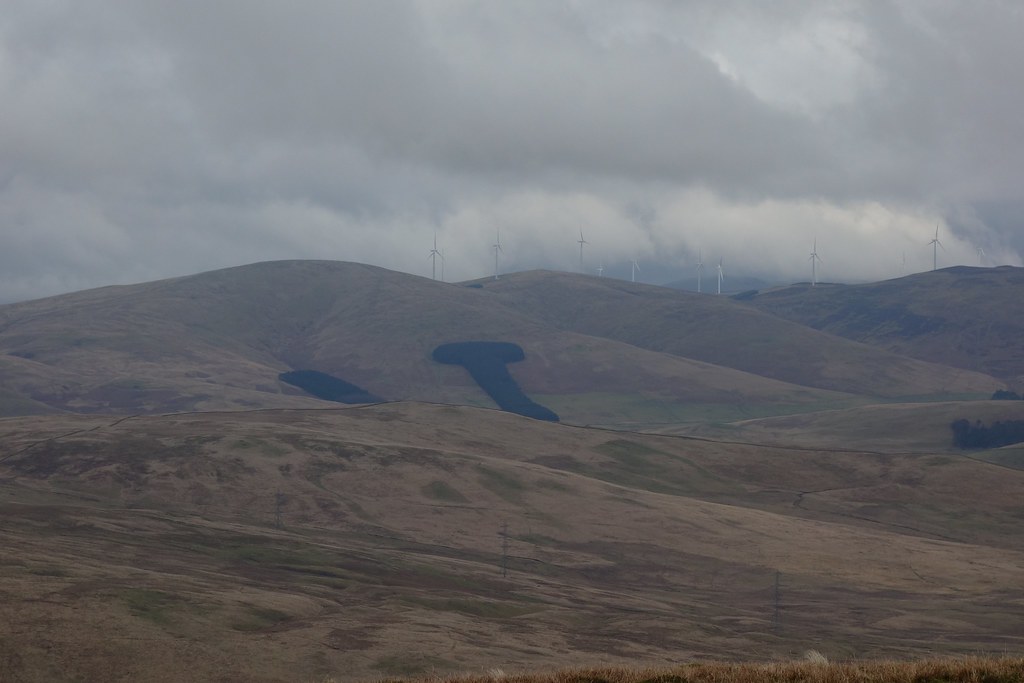 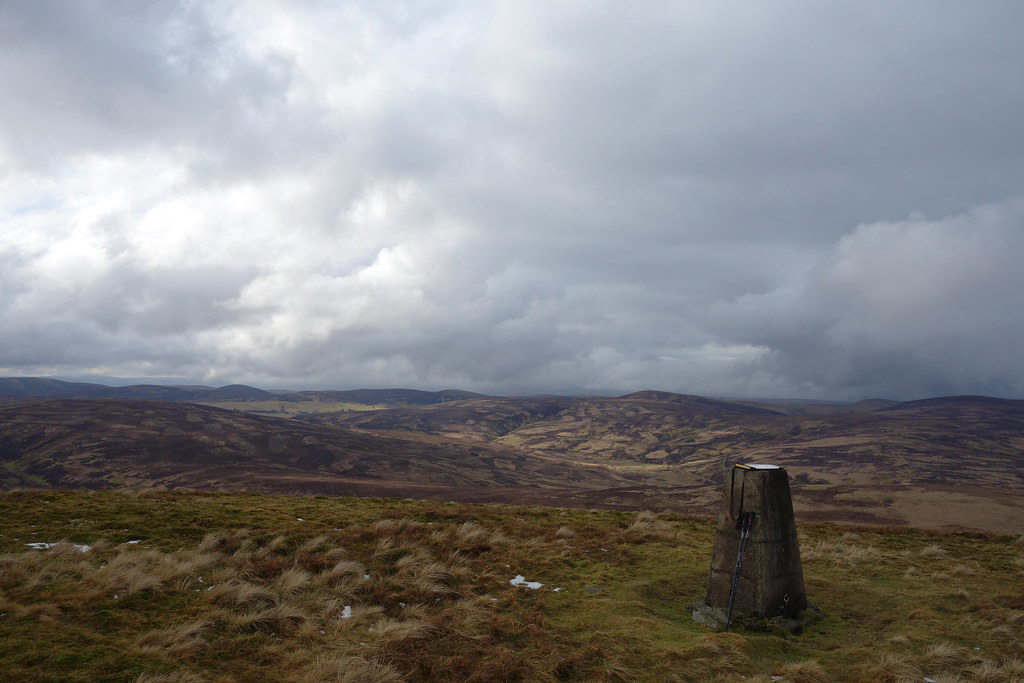 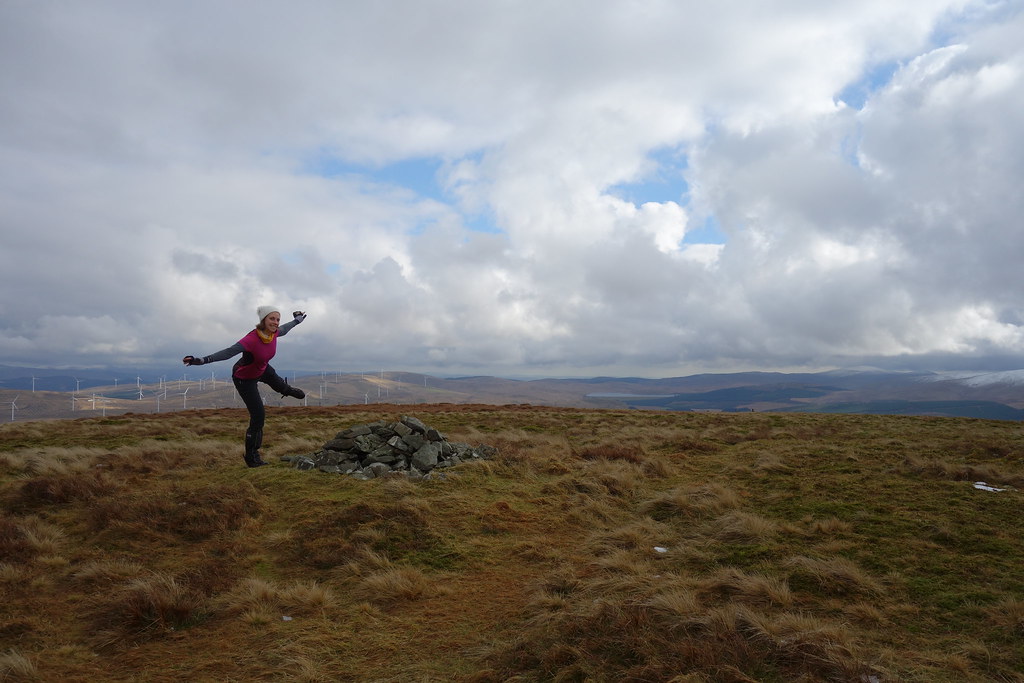 From here it should have been virtually a straight line downwards and around Doddin. But I have a habit of making things harder than they need to be. When I was reading Weaselmaster’s report, he mentioned climbing Doddin but decided against it. At the time I’d thought “I’m sure I could manage that” however, standing at the top of Louise Wood Law I had no plans for Doddin. I was absolutely pooped and still had to get back to the car!

The ground was hummocky and ankle twisty to start with and I tried to be careful but I kept wanting to enjoy the views! I scared a rabbit and a few grouse with my crashing around.

I came down a very steep slope to some interesting sheep pens and made it across the Glenochar Burn without incident. Then I ended up in a bog…the ground was lumpy and bumpy, I kept falling down holes and sinking into bogs. Would the ground all the way around Doddin be like that?!

This hill (Faugh) looks like Beinn Dearg Mor in the Fisherfield! 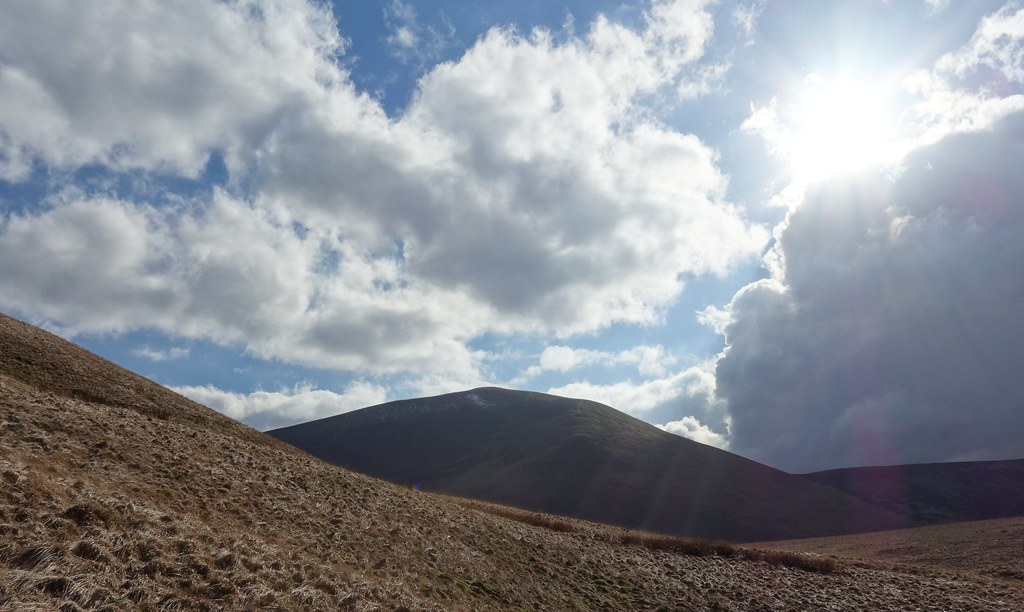 I looked up at Doddin….a short cut, I decided. Up and over would be easier than boghopping around

I started zig-zagging my way up the steep slope. The sun was beating down, I was sweating buckets and I was nearly out of water. I knew I had more in the car but had to ration it until then. 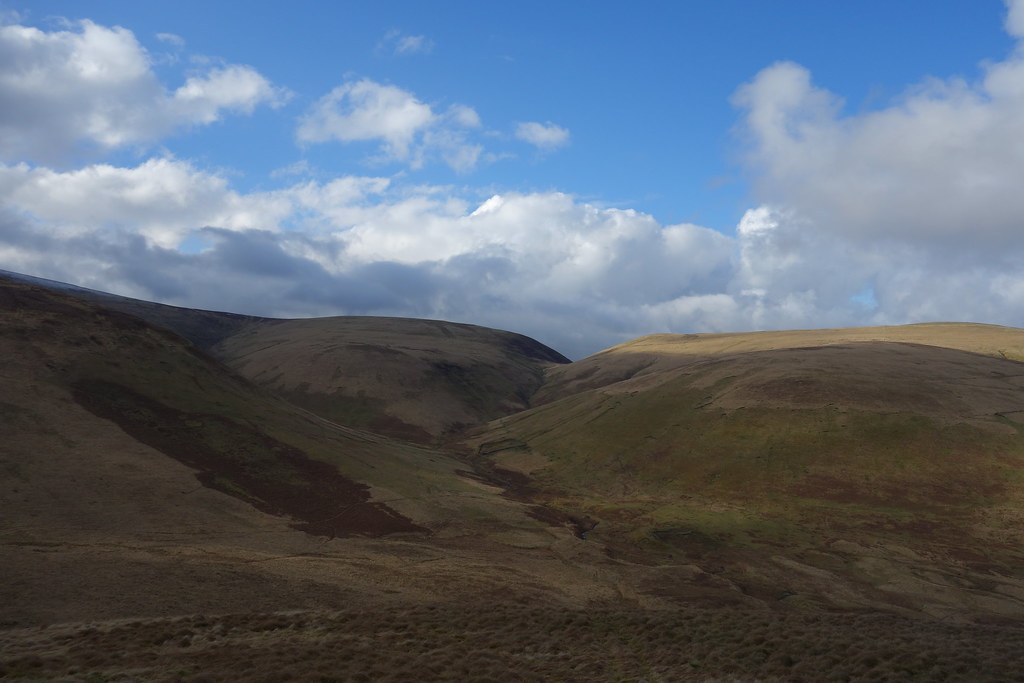 More cereal bars were consumed and they propelled me to the top. No cairn so had a wee wander around all the possible high points. 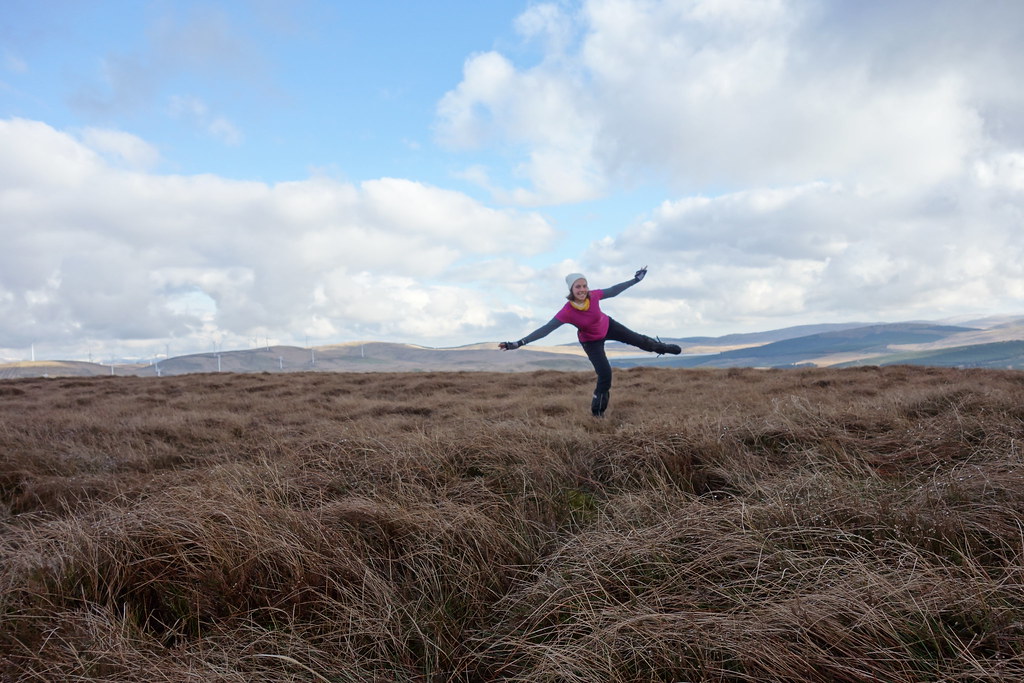 It was a fantastic viewpoint and although I was knackered I was glad I’d come up, although it wasn’t even competitiveness, just sheer stubborn bloody-minded-ness 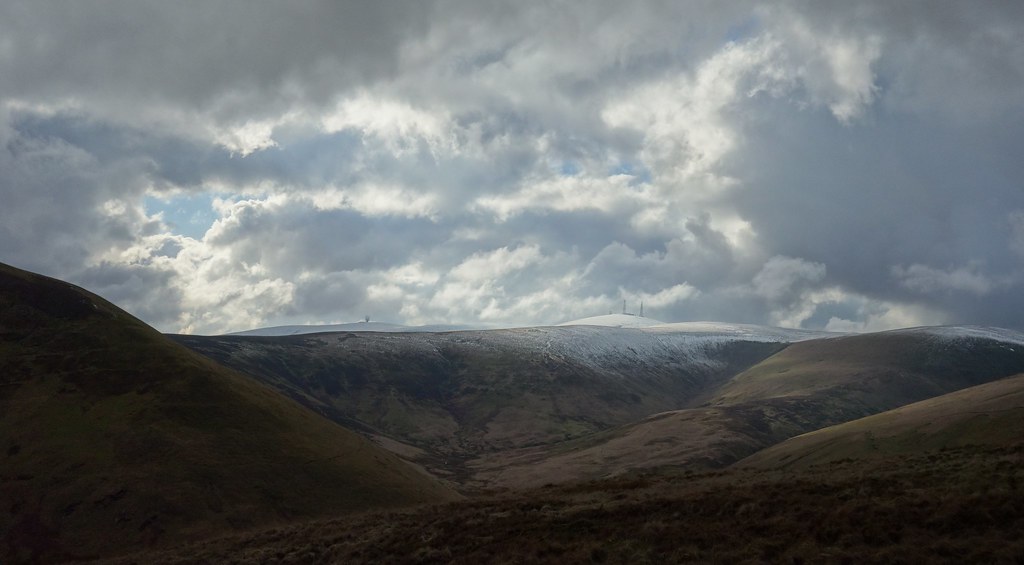 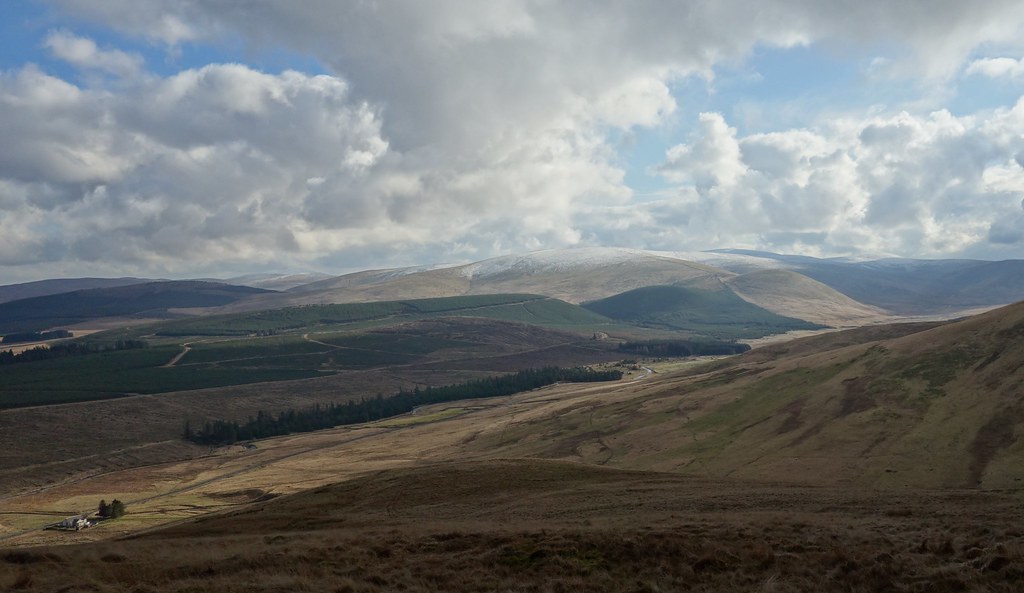 Heading down, I saw a random cairn which seemed a bit out of place…. 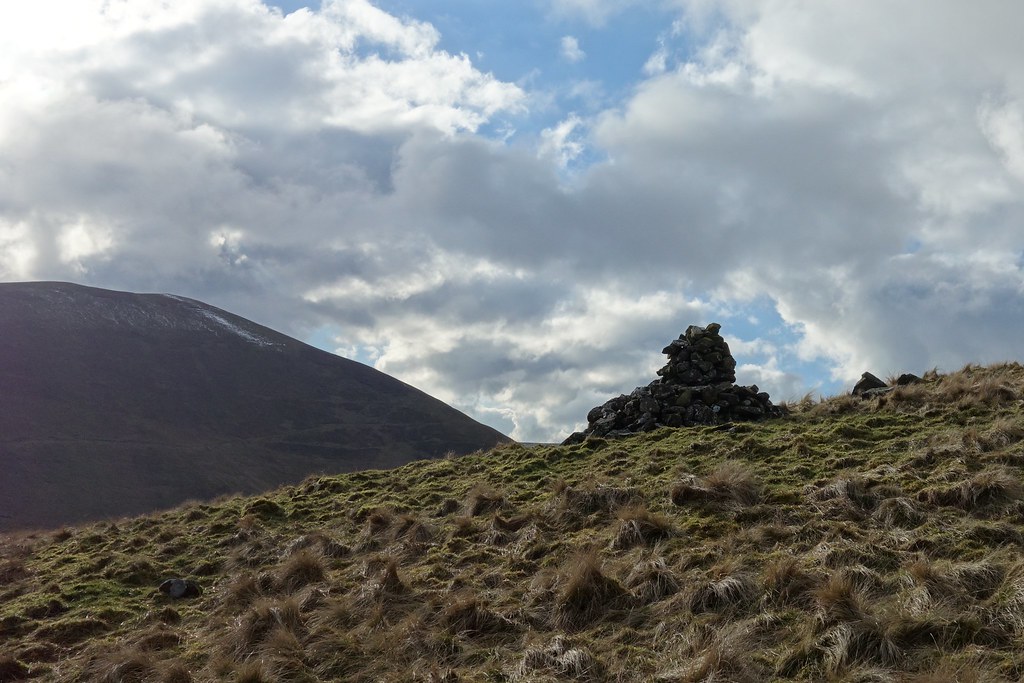 Before making my way down, rounded a couple of sheep pens at Peden and was back on the road. It was a very hot 2.5km. It can’t have taken more than 25-30 minutes but my legs were tired and I had no water left, so I was very glad to finally see Blondie!!

My route earlier – no wonder it had felt long!! 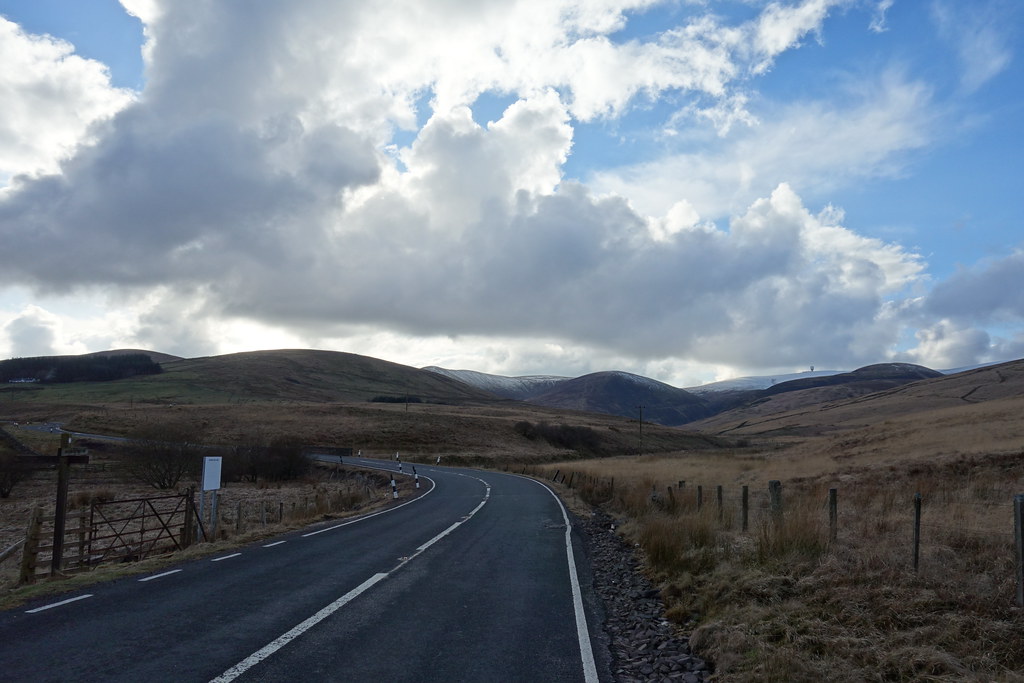 I could see back up to Lowther Hill, the very prominent dome on the top visible now. I know a lot of people will complain about the “detritus” on these hills, and to some extent I agree. But I do like the giant golf ball dome adding some character to Lowther Hill 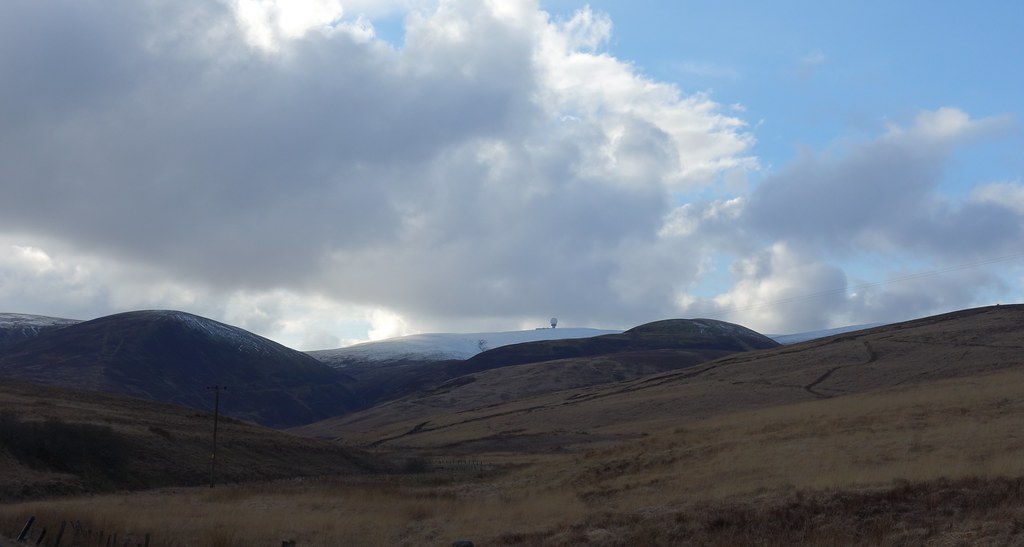 After downing a bottle of water, it was time to head home. It started raining almost as soon as I was back on the motorway

but I did manage to snap a picture of a rainbow. I was right at the tip of it but sadly my pot of gold didn’t materialise 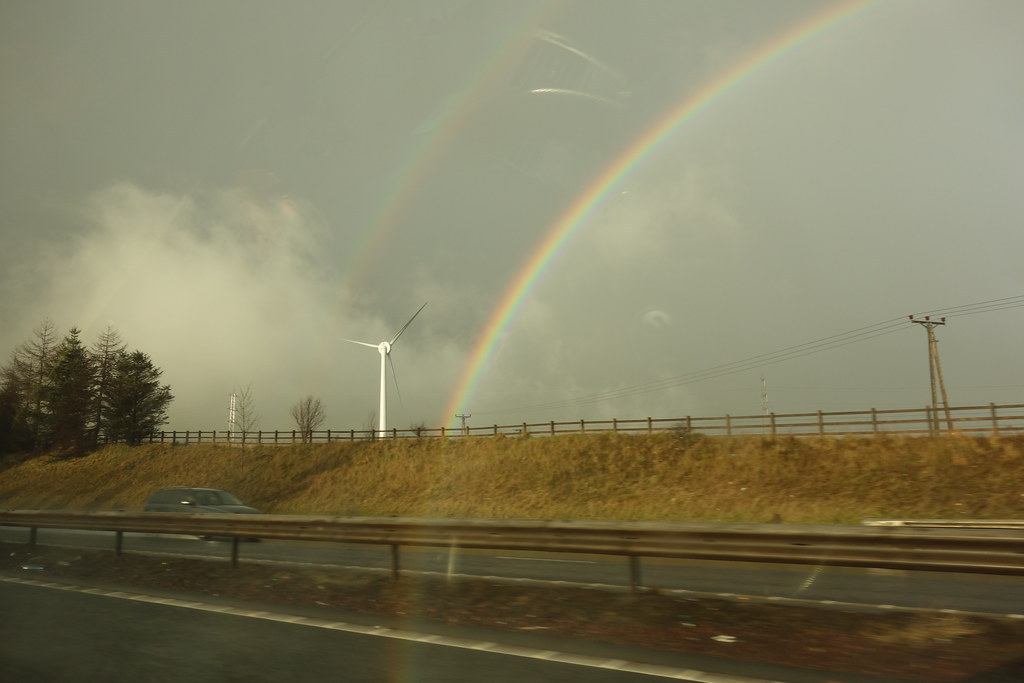