Geal Charn; in the company of Greyhounds?

Geal Charn; in the company of Greyhounds?


Time for another trip and after managing to decide going on Wednesday, we also managed to join up with previous friend from the South Glenshiel Ridge, Lawrence, after a pick-up at Tyndrum.

Progress to Garva Bridge was going well till we turned off the A86. Having not studied route too closely, the construction works were a bit confusing and no signs, except construction one's. Dithered about a bit, before a passing gritter driver, kindly gave us directions. Had he not more simply said "just follow me," things would have been even more simpler, as he drove straight there anyway Just arrived, Garva Bridge. Think this is Coire a' Bhein and Meall a'Chaorainn, a top of Carn Liath, one of the Creag Meagaidh circuit?

After admiring glances to the nice snowy ridge to the SW, we were soon on our way and pretty much followed route as described here. Main thing to watch for was "crossing the wire fence, almost immediately." Well spotted, Big Jasper! Thereafter things get boggy. Hardly a dry step, tho we were lucky for some 'frost effect,' providing a bit of firmness. The going was reasonably flat, but already I was puffing hard, as Charles and Lawrence began to stride out. I know I'm slow out the traps, but never realised I was in the company of greyhounds, sorry, greatness 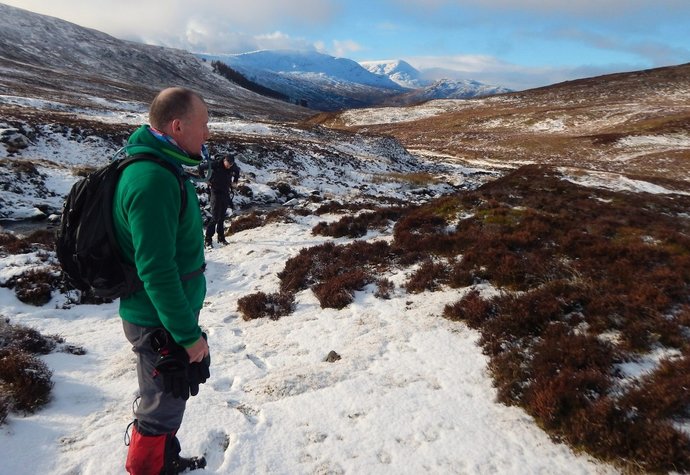 The greyhounds heading up by the Feith Talagain. And onwards, onto the slopes.

Crossing the Allt Corie nan Dearcag didn't present any great problems and soon the real climb begins. About halfway up, the mushy, heathery steps, became more snowy, heathery steps, still not easy on the heart. Thankfully the lads stopped every now and then, just to let old Jimbo catch up. Judicious use of the camera and water bottle helped spin out such stops We gradually progressed into thicker snow and occasional thoughts of crampons arose, but there was little icy stuff to cause concern, though it would have been nice if the cloud showed signs of dispersing. Not a bit of it, if anything, getting foggier as we leveled out and made our way to the summit, which seemed to retreat, as we advanced, requiring a wee check on bearings, before the large cairn loomed out the gloom. Hurrah! I think someone mentioned 2 hrs 5, to the top. Not much to see, i.e., nothing, so out came the tea and sandwiches after a few summit shots, photographic one's not the alcohol type Proof I made it. Myself and Big Jesper. True to form, the cloud out to the east cleared for a short spell, but no one was for taking time off from eating to get cold hands taking photo's - it was chilly alright! It soon closed in again, so the rucksacks were donned and the route up reversed. Easy enough following footprints back, though way down, near Garvabeg, we lost the path a wee bit, taking us into more mush, but the greyhounds soon cleaned off the muck before returning over the bridge to their traps. Lawrence and Charles make a break for it. I tried to figure why I was so slow compared to my companions? Was it my large-ish looking rucksack of winter gear, wee, short legs, lack of fuel, a wee cycle the day before? Then it clicked; nah, just unfit Minor obstruction, in view of the hill. Will the bridge take the weight, I wonder? I hold back, just in case. 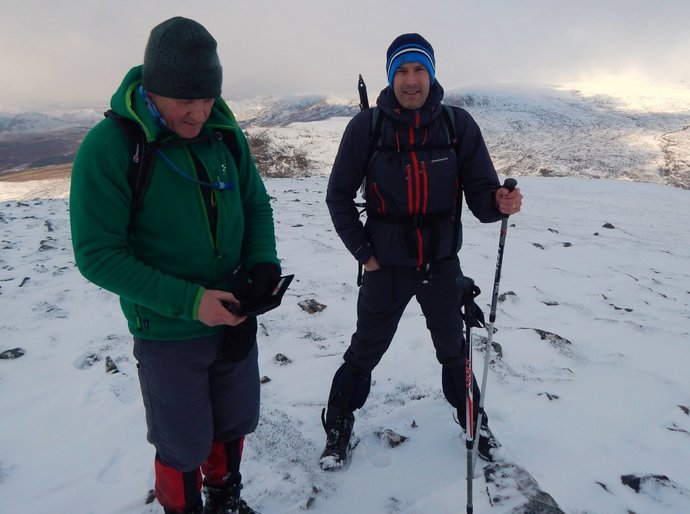 Good report and a great day out.

Lawrence g wrote:Good report and a great day out.

Thanks, chaps. Wish my reports were as good as the