Queensberry to Gana from the south

Queensberry to Gana from the south


The forecast was good with a dry sunny day being predicted to follow early morning rain, and after a week laid low by flu I was itching to visit a few summits. The southern Lowthers were on my to-do list so I headed southwest with the intention of starting with Queensberry which is a bit of an outlier to the group. Once at the summit I could then decide whether I felt fit enough to continue to Gana Hill before returning to the car. I had been toying with the idea of doing all seven Donalds in one walk but had decided I wasn’t up to a 30km walk right now – if ever.

I arrived at the turning for Mitchellslacks Farm at about 11am and found easy parking by the public footpath signpost. There’s enough room for two cars there. The track led past the farm buildings and through two fields full of sheep to a gate then led gently uphill to a wee hillock - The Law. There I left bobble_hat_kenny's route to the ‘circular sheep bucht’ (Ae Waukin' O' - Queensberry from Mitchellslacks) and kept on the track to the west of The Law. This was planning ahead. If I did extend my walk to Gana Hill I intended to descend a newish track that runs down from not far below that summit. It would lead me to the far side of Capel Water and I’d either have to cross it or face a longer walk on to Lochaben and then back along the road. A close look at Google Earth had revealed a few pixels that optimism told me might be a bridge and I wanted to check. Optimism triumphed, and down below the track I saw a footbridge spanning the Capel Water that would save me from a wade if I continued to Gana. Reassured about my possible return route I set off up Glengowan Hill and headed for Queensberry. A cairn visible against the sky lures the walker over what appears to be the last hundred metres of ascent, but it proves to be perched on an outcrop as the upward slope levels off. Several hundred metres later the real summit cairn is a more impressive pile of rock with low shelter walls radiating from it. 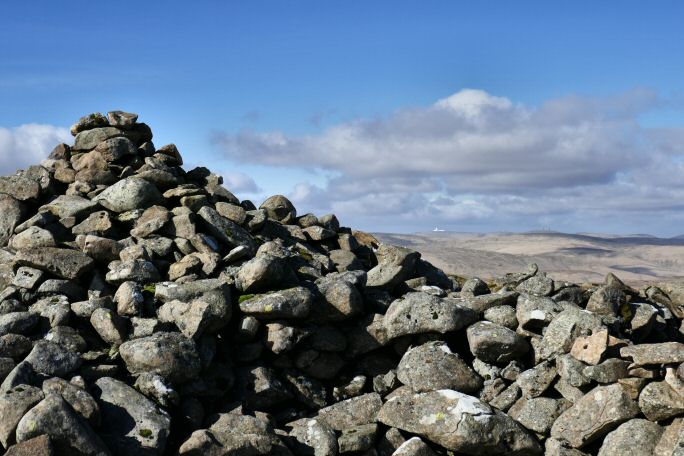 View to the SE and the Forest of Ae

I had told myself that if I reached the summit within two hours of my start time I’d continue on to Gana Hill. I hadn’t felt at my best on the way up and was surprised that I’d arrived 11 minutes too early to justify an early return to myself. Perhaps I should have taken more time admiring the views on the way up, because with bright sunshine, fluffy clouds and only a stiff breeze it was a great time to be on the summits. Views were clear all round and in contrast with weasemaster’s report only five days earlier there was hardly any snow visible. A short stop for a pork pie and an Eccles Cake and I set off for Penbreck. On the way an unusually tall fencepost proved to be the location of a couple of temperature and humidity sensors: gathering data on the climate for a project I assume. The fence with its sensors

The fence running north from Penbreck summit had obviously had its wires replaced in recent years, but the old discarded wire now lies half buried alongside it providing plenty of trip hazards. Keep a few metres away from the fence as some of those grass stalks are rusty wires. Fortunately that doesn’t apply to the final steep and sometimes slippery descent to Capel Yetts, where some may welcome an occasional handhold. This is the lowest point along this part of the traverse and wasn’t as boggy as I’d expected. In fact, though there were several sections of ‘soft’ ground during the walk, I managed to avoid anything more than ankle deep and my feet stayed dry all day. The 130m plod up Earncraig Hill was taken steadily and the following 170m ascent to the top of Gana Hill slower still. Queensberry with its small patch of snow from Earncraig Hill summit

The final part of the climb to Gana Hill did give one surprise. When I’d first researched the route I’d noticed that the WH 1:25,000 map lacked a track shown on my recently purchased 1:25,000 OS map and that track was also visible on Google Earth. It ran from Locherben all the way up to an altitude of 510m on Gana Shank and was my planned descent route. Now I was nearing the summit I found that the track had come to meet me and now continued all the way to and past the summit. A further look at the latest 1:25,000 map revealed another new section of track to the west climbing Garroch Fell to 625m half a kilometre short of Gana’s summit. The link between the two tracks has now evidently been completed.

The highest point of Gana Hill is not obvious. The OS spot height of 668m lies within a couple of metres of the north side of the track and is about 65m from the small cairn on the other side of the fence. The spot height location does look as though it might be the higher, but my Garmin reported both as 668m. Looking from the track as it passes Gana Hill's summit down to where it crosses Hard Hill and the just visible grouse butts. (a row of dark spots)

After a few more photos I set off down the track for the 7km walk back to the car. During the descent I passed through a line of grouse butts on Hard Hill and about 1.5km later disturbed a small herd of goats. Once opposite The Law the track descended steeply then, as it swung to the right, an area of short grass led to the edge of the deeply eroded stream channel that ran down towards the footbridge. Once across the river I initially looked at following it downstream, but soon decided it would be easier to climb back up to re-join my inward route along the track 40m above. I arrived at my car with an empty water bottle and well satisfied with what had been a grand day out. I can now look forward to the circuit of the northern four in the group and some tight line walking as demonstrated by sick kid (Achieving Graham Parity on Queensberry hill)

A final surprise came when I started writing this report. I found that the WH 1:25,000 map had been updated within the last few days and now includes all the tracks on my printed version that had previously been missing.