It was one of those days when if we had known the truth about the weather we may have stayed at home and missed out on an exciting little outing. (Good visibility

)
This horseshoe walk going up to the South Shiel Ridge via Druim Tholliadh and decending via Druim Coire Nan Eirecheanach was exciting in the snow, at times steep and narrow but nothing technical.

When we started walking, just after 09:00,, the weather was dreary, no views of the hills and drizzling with rain. We were optimistic that it would improve

. There were plenty of red deer around as we followed the meandering path up to the start of Druim Tholliadh but none of them were really interested in posing for photos. At the end of the path there was a short steep slope leading up to the ridge. 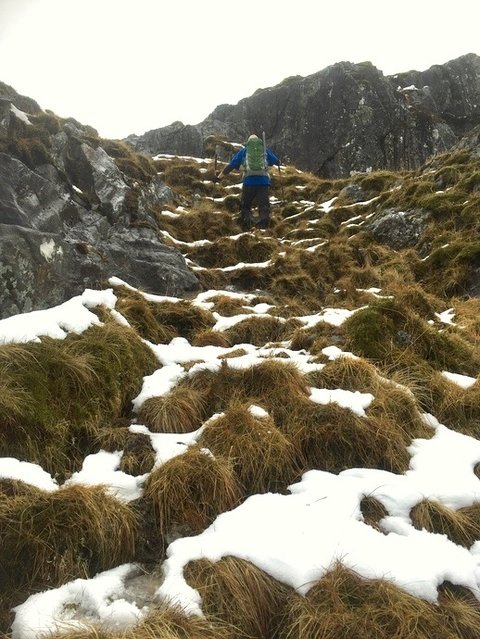 Up the final slope to the ridge 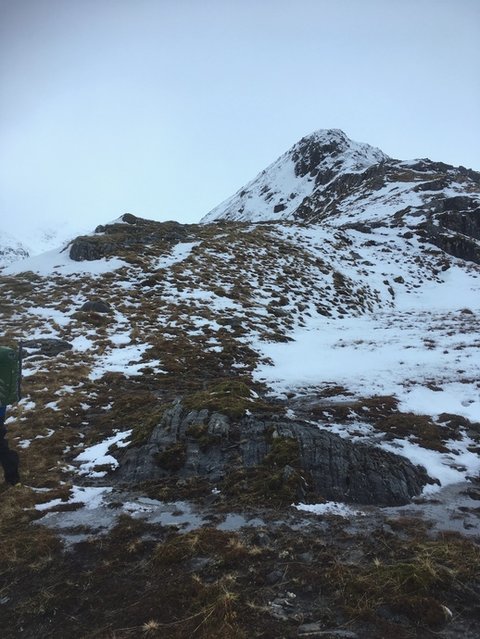 Drum Thollaidh and the first tower

We could see a couple of people on Druim Coire nan Eirecheanach, the ridge leading directly to Maol Chinn Dearg and our planned descent route. They seemed to be looking at their map and then across at us, I hope we weren't confusing them by being on the wrong ridge. It was encouraging to think we may have an easier descent with an obvious route from the summit and the trail ready broken

.
But first there was the ascent to worry about.
The two rocky towers on Drum Thollaidh looked intimidatingly steep from lower down but as we got closer to them they appeared much more amenable. Both towers had a path leading over them with just a couple of steep steps. 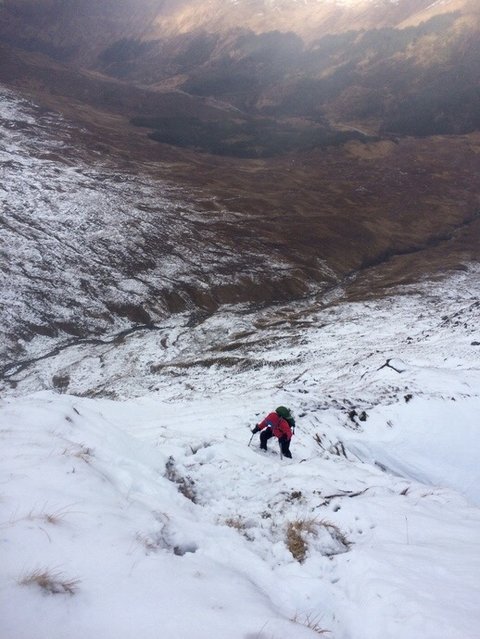 On my way up the first tower 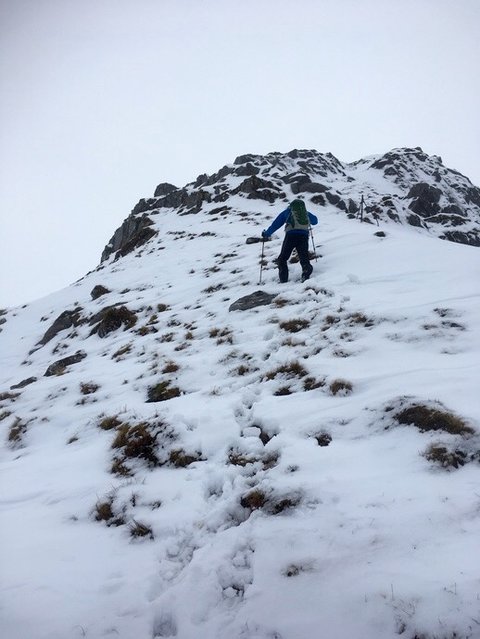 Up the second tower

As we gained height the drizzle turned to light snow and the visibility was poor. Any further optimism about the weather improving would have been silly.

Up the second tower On top of the second tower

The next section of the ridge was very narrow, disappearing into a white nothingness on either side. 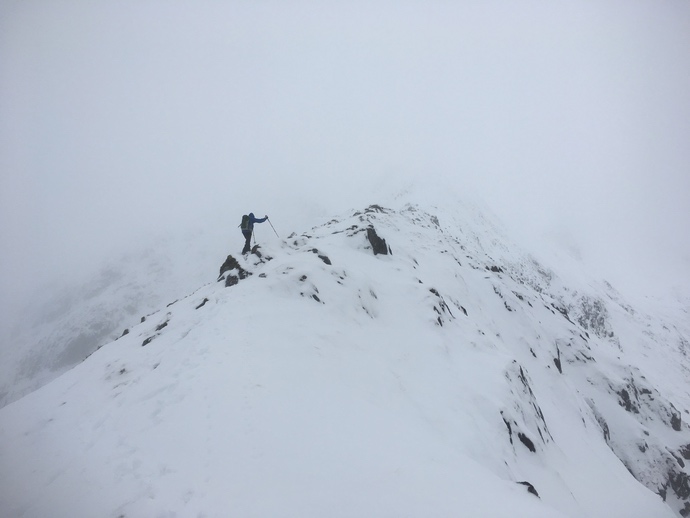 On the final steep slog, up to Sgurr Coire na Feinne, the snow was deeper, but wet and I don't think it will last long Out of the White Mist

No views, but a feeling of great tranquility walking along the South Shiel Ridge. 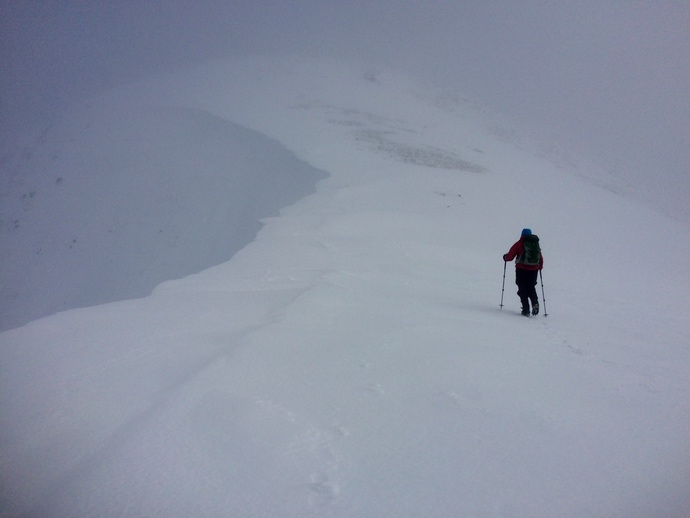 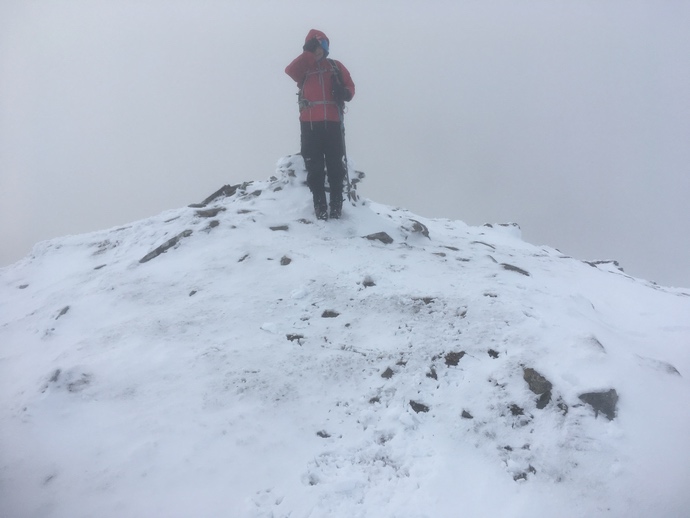 By the time we reached Maol Chinn-dearg there was a cold wind and it was snowing again. Everything felt sodden. There was no shelter on the summit so we decided not hang around. We looked for footprints leading away from the summit, but there were none so some careful navigation was required. My phone case was damp and misted up, the touch screen did not want to work to provide a grid reference and when it did I could barely read it,

. It was impossible to see which way the route went and at one point it felt like we were stepping out onto the cornice

. It was a relief when we became established on Druim Coire nan Eirecheanach and could see the ridge stretching out beneath us. 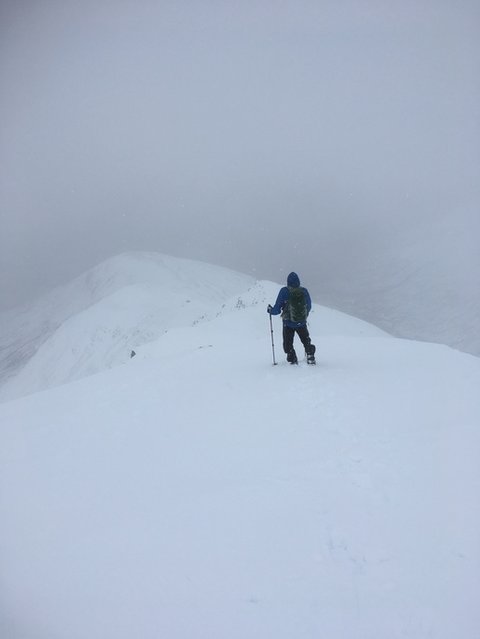 Relief to see the way ahead.

. The conditions made it feel quite an exciting and dramatic descent. And the sun came out 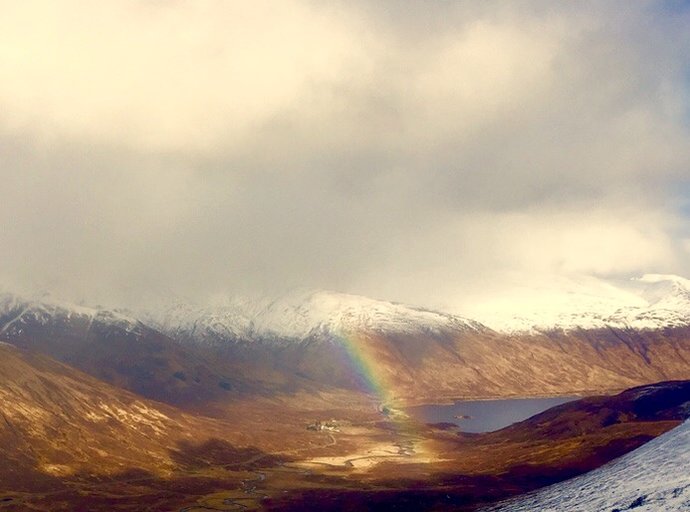 With all the excitement over

and a little bit of sunshine we decided to stop for some refreshments. Looking across at Aonach Air Crith We came across the footsteps, presumably of the people we had seen on the ridge earlier in the day, which led us nicely back to path for a straightforward descent. . Looking back at the two ridges.

Like your photo " on top of the 2nd tower" . Shame it wasn't a bit clearer for you.
I was on mheadhoin and eassian yesterday and no views from up top either until the sun broke through on the descent.

Coop wrote:Like your photo " on top of the 2nd tower" . Shame it wasn't a bit clearer for you.
I was on mheadhoin and eassian yesterday and no views from up top either until the sun broke through on the descent.

A bit of shame about the weather sorry you missed out on the sunshine as well, but without the clag we would miss those magical moments when it clears,

so not all was lost.

That does look exciting and dramatic. Kind of glad I'm done with that sort of thing though!

litljortindan wrote:That does look exciting and dramatic. Kind of glad I'm done with that sort of thing though!

I could have sworn I'd already replied to this! Obviously incompetence got the better of me...


That looks like a proper winter adventure, who said the South Cluanie ridge wasn't exciting!

Thank you Mal. It has become a bit of a project finding all the different routes up to the main ridge, some better than others but lots of small adventures to be had.

Not me, but then I am easily excited